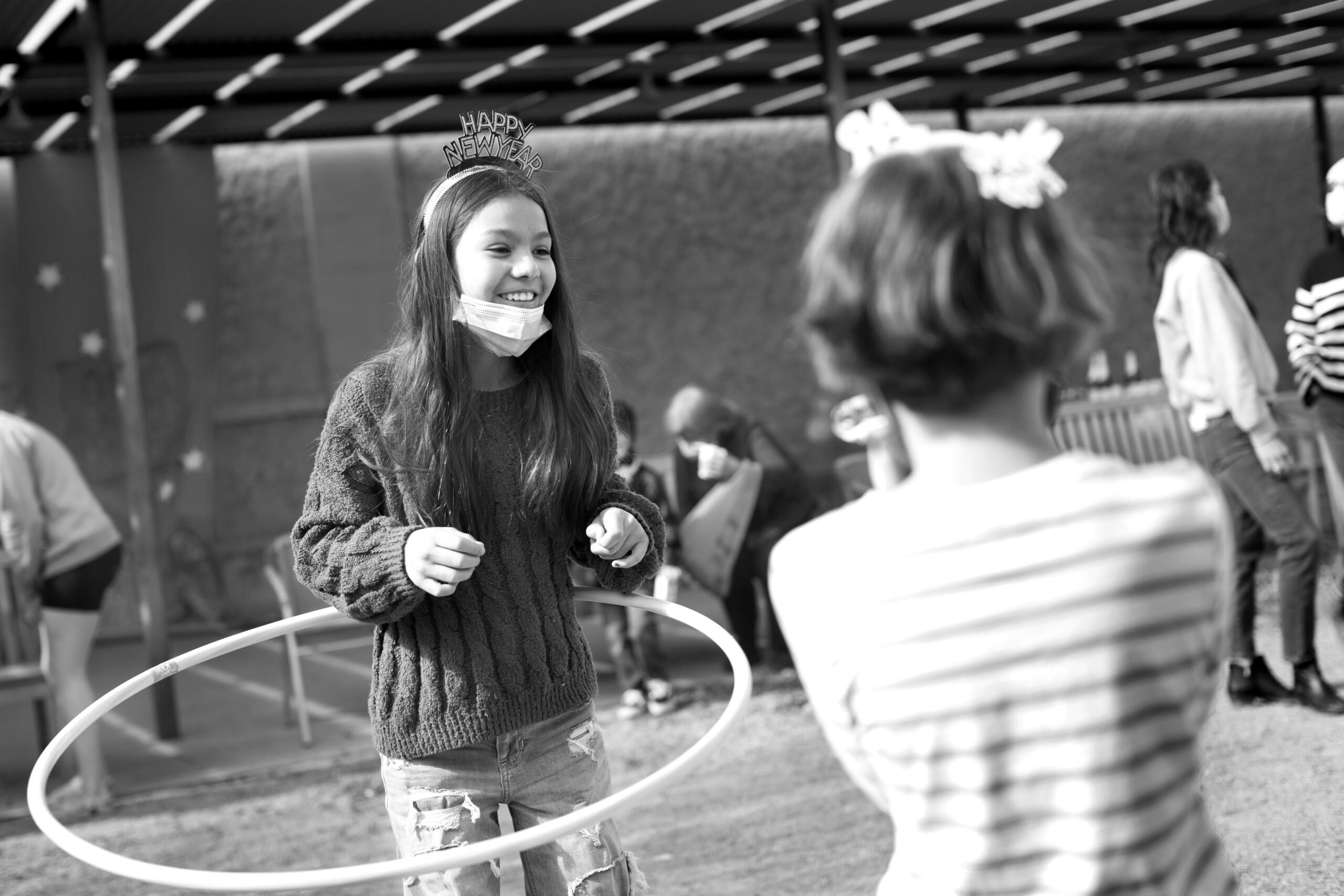 MARFA — At the stroke of lunchtime, everyone cheered as balloons fell from the sky. The DJ bumped a selection of kid-friendly hits as parents chatted on the sidelines. Except for the omnipresent face masks, there were no signs that COVID slowed down the party.

On December 30, the Marfa Public Library hosted “Noon Years Eve,” a daytime celebration of the New Year for those whose bedtime rolls around well before midnight. For Nicki Ittner, who began serving as the library director during the pandemic, it’s been a challenge to get kids excited about the library at a time when gathering in a public space isn’t always the safest idea.

“What we’re trying to do is have kids associate the library with fun,” she explained. “As far as getting kids reading, that’s really what we want — to have them think of the library as a positive place.”

Ittner had originally planned to host some of the festivities inside, but as omicron cases started to rise, the team decided to keep things confined to the courtyard. They brainstormed ways to keep the event feeling festive and special. Somebody pitched the idea: what about a kid’s-only nightclub?

Harry Crofton, a weekly volunteer at the library, went to work constructing a club entrance bedecked with pink glitter streamers. “I think the threshold really transforms the space — it’s a little more special than just walking into the courtyard,” he said. He printed posters for pop acts and stapled them to the walls, then set up a table where guests were encouraged to make an ID proving their “under 21” status. Inside, kids were treated to rows of activities, including a bowtie-making station manned by Marc Declercq and a dancefloor buoyed by the DJ expertise of the library’s director of programming and volunteer coordinator, JD DiFabbio. 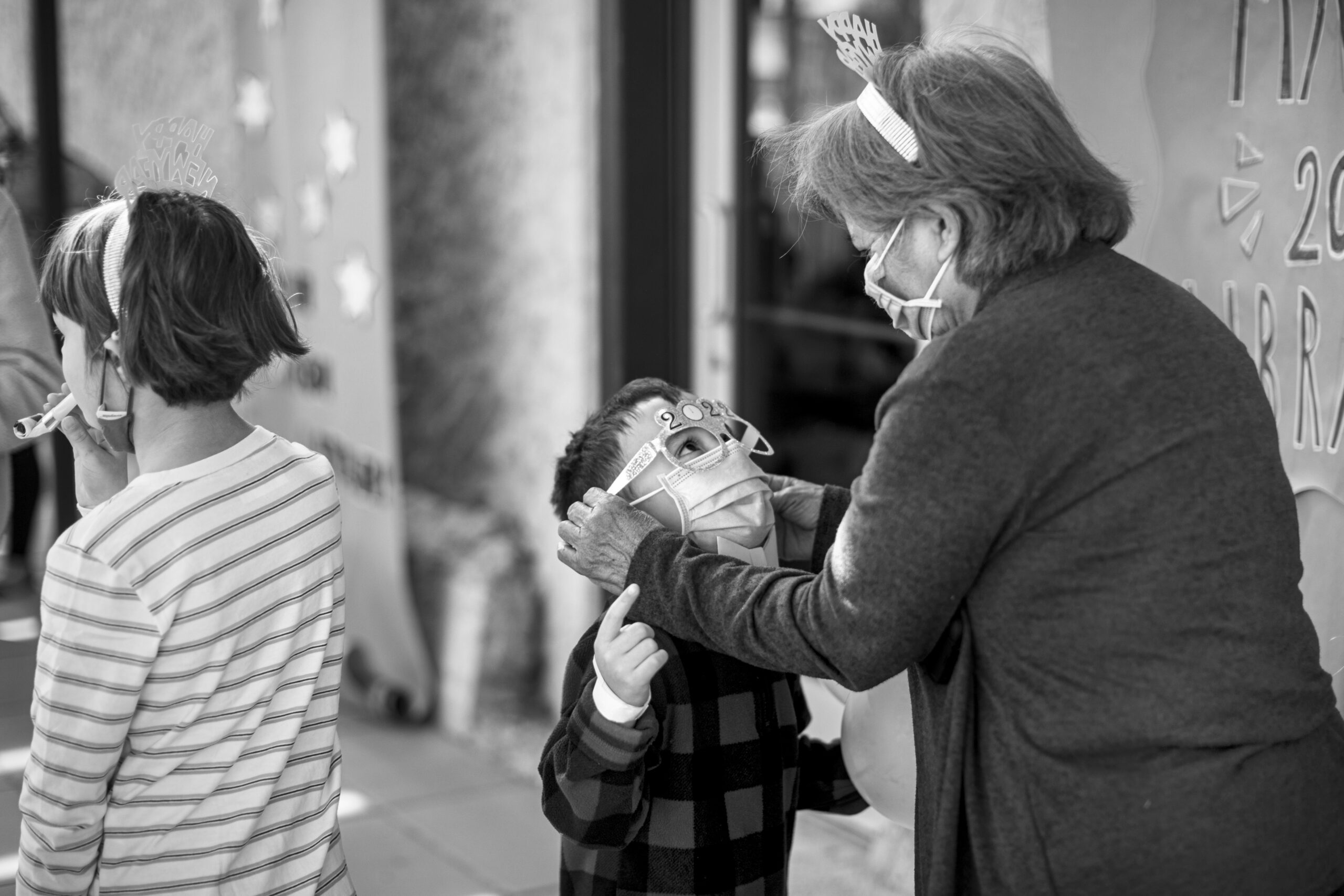 Local broadcaster Lisa Kettyle, formerly of Marfa Public Radio, ran the bar, where patrons showed ID to access a sophisticated selection of sparkling apple and raspberry ciders and juice boxes. “This is the easiest bartending gig I’ve ever had in Marfa,” she said. Crofton echoed that sentiment as the event’s official bouncer and reported no security incidents.

Kids and adults alike named the balloon drop as their favorite event of the day. “When the balloons were falling down, that was my favorite part,” said Savian Enriquez, a pre-K student. When asked about his new year’s resolutions, Savian said that in 2022 he plans to play in the snow and have fun.

For older kids, the chance to gather and run around with peers was a special event in and of itself. Easton Watts, a sixth grader who is homeschooled, reported a feeling of loneliness and isolation because of the pandemic. “My friend group is down to three people,” he said. “My brother has a bunch of friends, but I don’t see barely any.” In 2022, he hopes to spend less time playing video games and devote more time to “other stuff.”

Marfa kids who left anonymous wishes on the party’s official wish board hoped for a year full of “peace,” “cats,” “ghosts and goblins and UFOs,” “more adventures” and “good food.” Someone with suspiciously adult handwriting wished for “the health of friends and family.”

Ittner explained that children’s programming at the Marfa Public Library is mostly grant-funded, but those wishing to make monetary contributions can do so through the library’s Friends organization. The Friends of the Marfa Public Library are a 501(c)(3) organization that supports the library’s mission of nourishing the community through educational programming and materials. Potential volunteers are encouraged to get in touch with JD DiFabbio.

“It’s been such a weird time,” Ittner said. “But it’s been great to get the kids together, if only for a little while.”