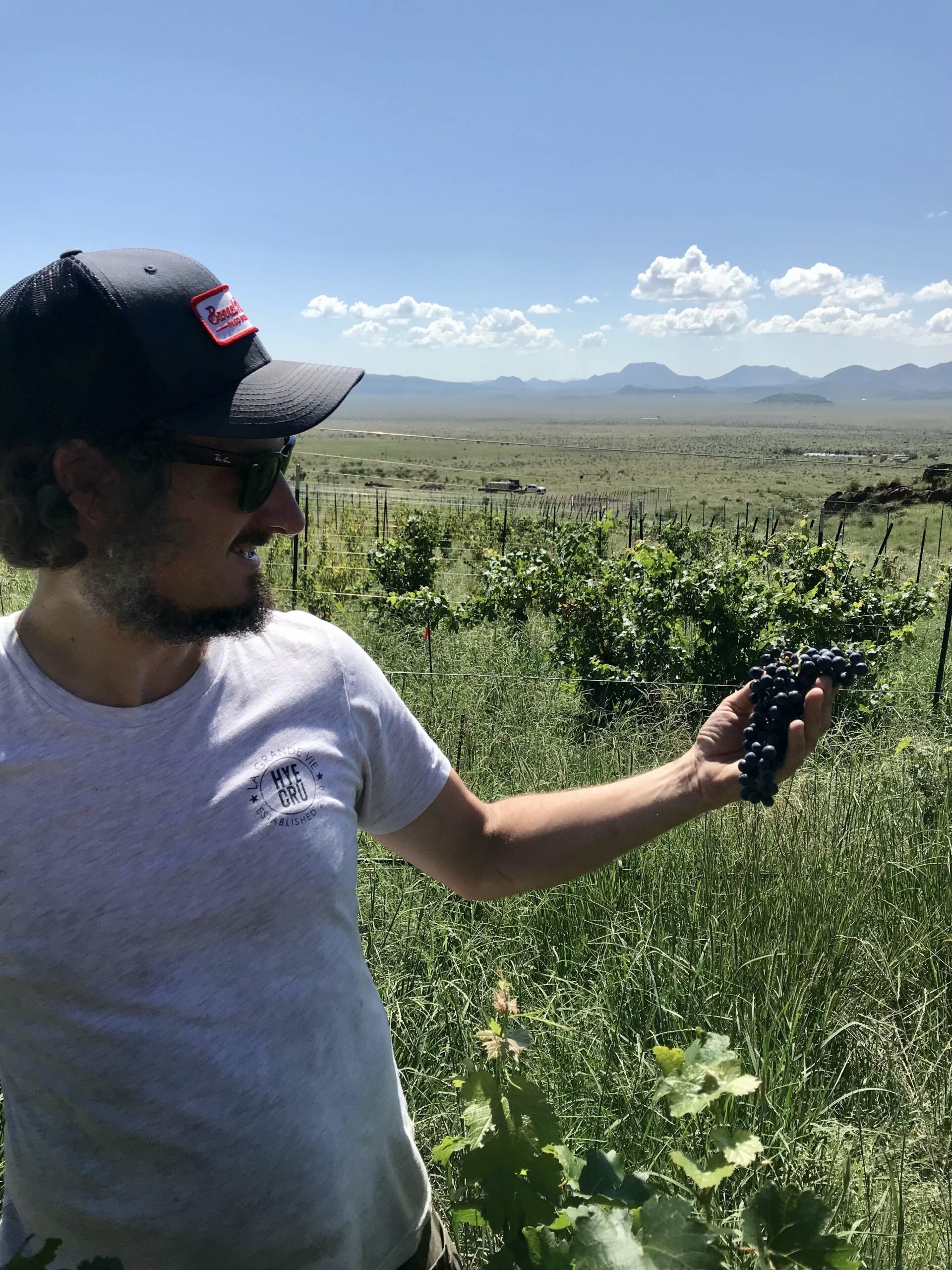 Benjamin Calais of Calais Winery recently purchased land in the Davis Mountains where he will plant a vineyard. Photo courtesy Maura Sharp.
Subscribe

Calais is the latest in a string of newcomers to the area establishing vineyards and wineries, attracted to the Davis Mountains for its nutrient rich soil, water availability, cool temperatures and wondrous mountain vistas. The superior grape-growing conditions have earned the area official “American Viticultural Area” or AVA status, one of only eight regions in the state.

Calais intends to fill his newly-purchased 60-acre spread with Bordeaux grape varieties and shares a love of viniculture with neighboring vineyards Alta Marfa and Chateau Wright. Calais is also the winemaking partner of Maura and Dan Sharp of Sharp Vineyards, which also lies within the Davis Mountains AVA, in close proximity to his new property.

After a long negotiation process, Calais finally closed on the site of the future vineyard in December 2021. The spot will serve as one of two estate vineyards for Calais Winery, meaning wine produced there will be exclusively made up of grapes grown on the property and be aged and bottled on site. By spending time learning from preexisting vineyards about the area’s specific challenges, Calais said he knew what to look for in selecting a vineyard property.

“We know the water scenario on this property, we know the neighboring wells, it’s an area that we scouted pretty heavily,” he said. “It was a perfect spot for what we want to be doing, which is high in Bordeaux varieties and pretty sizable planting.”

Originally from France, Calais moved to Texas over a decade ago and began putting aside his career as a software engineer to focus on winemaking full time. He developed software which helps him predict spring frost, ripening season temperatures and total growing degree days, a method of predicting vine development, utilizing data from NASA’s Climate Data Services. He uses the data points to determine the most favorable climates for grape growing in Texas.

The software pointed him to the Davis Mountains where he has been searching for the ideal property for around 13 to 14 years, he said. But the region, despite its promise, will still present some challenges.

“We recognize the really high risk of weather events that you get in the area — winter damage, spring frost, hailstorms,” said Calais. “I was in the area in October last year when it dropped to 18 degrees and ice. We know we won’t get to make wine every year when working at such high elevation due to all those factors.”

The winemaker currently sources grapes for his existing wineries in Hye from various areas throughout Texas, including Cathedral Mountain and Mile High vineyards in Alpine and Chateau Wright in the Davis Mountains. As Calais Winery is already a recognized entity in the Texas wine industry, the focus of their new venture will be to cultivate a productive vineyard to supply grapes to their existing wineries.

Of the property’s 60 acres, not all will be plantable, said Calais, but they are hoping to establish a roughly 40-acre vineyard. A wet weather creek flows through the middle of the property, and they intend to drill a well soon which will provide them with more information about their water availability and capacity for vine planting. Calais is in no rush, though, and said they will start small in order to avoid large-scale mistakes.

“It doesn’t matter how much modeling you do, how many consultants you have, and how much money you invest in it,” said Calais. “Your first planning is never the best planting. We will plant at a slow pace over a period of time.”

While Calais’ other vineyards in Hye double as wineries with tasting rooms and hospitality staff, his property in the Davis Mountains will serve solely as a vineyard, for now.

The acreage and scale of the operation should lend itself to a few full-time or close to full-time employees, though Calais expressed concern that finding skilled vineyard workers in the area could be an issue.

While Calais no longer has much time for computer science, he said it is a fair tradeoff and his life as a full-time winemaker fulfills him.

“I enjoy the fact that I’m on a tractor one day and bottling wine the next. We’re racking barrels and we’re doing all those different things,” said Calais. “It’s not a monotonous life.”