‘Burning the village to save it’: Presidio reacts to planned diesel transport operation 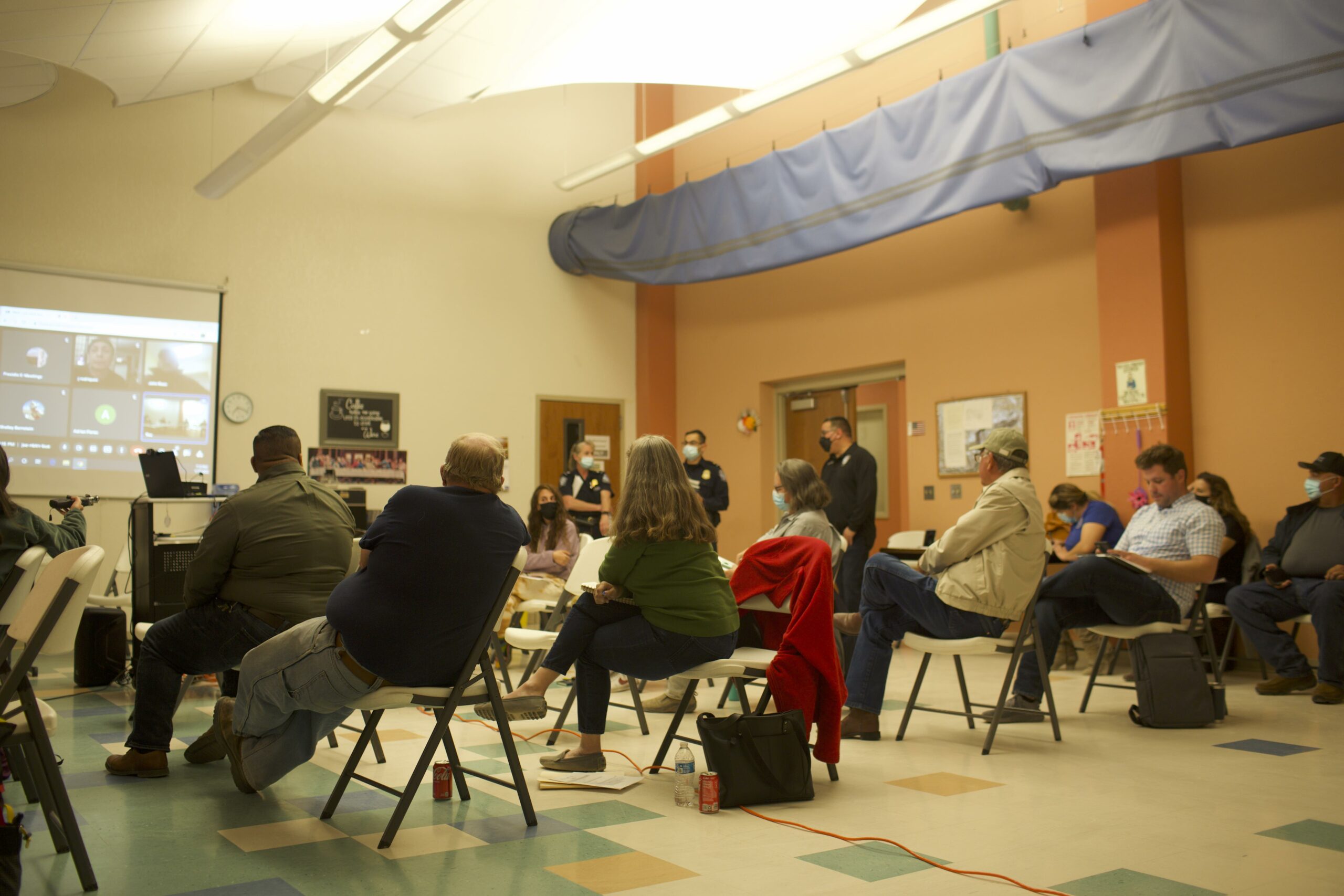 PRESIDIO — At an impassioned city council meeting on Monday night at the Presidio Activities Center, council members and private citizens reacted to the revelation of a diesel transport operation that could potentially truck hundreds of thousands of gallons of hazardous material through the city each week. Officials from the Presidio Port of Entry were present to field concerns from the public, who came prepared with plenty of questions.

The plan would require the introduction of hazmat protocols to Presidio in order to facilitate the unloading of diesel shipments off of trains and onto Chihuahua City-bound trucks. Those hazmat protocols were the subject of a January 5 meeting attended by representatives of the Presidio Port of Entry, the City of Presidio and Presidio emergency services. Now, citizens and some city representatives who were not present at the initial hazmat meetings have raised the alarm, questioning whether the risks are worth the potential rewards.

Joaquin Rodriguez was one of a handful of people from around the region and state who braved technical difficulties to dial into Monday’s meeting virtually. He attended the meeting from Austin, but has almost three centuries of family history in Presidio and visits regularly. “I feel compelled to advocate for [Presidio] whenever I believe it is threatened,” he said. “There’s no doubt that Presidio needs an economic boost. But what tangible economic benefit would supersede environmental and health risks to its citizens? It’s like burning the village to save it.”

At a previous council meeting held November 15, 2021, City Administrator Brad Newton informed council members in his administrator’s report that he had received an “interesting email” from Texas Pacifico about the prospect of restarting rail commerce in Presidio — dormant since 2009 after a series of fires — by participating in a three-step transport operation to ship diesel fuel from the Gulf Coast to Chihuahua City. Investors could save money by sending the fuel to the Fort Worth area via pipeline, loading it onto railcars and shipping it to Presidio, where it would be transferred to tanker trucks by a process called transloading. The tanker trucks would complete the journey by driving the fuel through Presidio, over the bridge, and down the highway to Chihuahua City for delivery.

Transloading is a common practice along the U.S.-Mexico border, thanks to shifting regulations limiting the transport of fuel into Mexico via pipeline and rail. Reforms sparked by President Andres Manuel López Obrador aim to achieve Mexican energy independence by 2023, but state-owned oil company Pemex can’t yet produce enough fuel to meet demand, necessitating shipments from refineries in the United States. Fuel headed to Chihuahua City is currently routed through El Paso, but the trucking companies carrying out the final leg of the journey could cut their drive time in half by driving across the border at Presidio instead. Neither city officials nor representatives for Strobel Energy could name the shipping company nor the potential investors involved in this plan.

At the November city council meeting, Newton said that the railroad had proposed coordinating with Strobel Energy and the unnamed trucking company to send 15 trucks a day filled with diesel fuel through Presidio. The potential benefits to the city included restarting rail service to town and shipping fuel for local gas stations directly into Presidio, rather than trucking them in long-distance. The proposal was not mentioned again at subsequent city council meetings, but port officials started hosting a series of meetings for select city officials and emergency responders to start preparing for the prospect of shipping hazardous materials through town.

Presidio, classified as a “small” port of entry by Customs and Border Protection, has never been hazmat certified. “There’s no way we would ever let hazmat across the Presidio bridge,” Newton recalled relaying to Texas Pacifico in November. That attitude changed quickly over the course of two months, after two meetings aimed at getting Presidio’s bridge and first responders hazmat certified as quickly as possible. “This could be a situation where they have every right to do what they’re going to do,” Mayor John Ferguson told the assembled crowd on Monday night.

Through the course of a discussion that lasted over an hour, one question hung in the air without a satisfactory answer: Why weren’t city council members invited to the hazmat meetings?

Councilmember John Razo, who has also served as a Presidio first responder, was “really disappointed” he wasn’t included in the process. “That’s a lot of hazmat, and we’re not ready for it,” he said.

Council members Nancy Arevalo, Billy Hernandez and Arian Velazquez-Ornelas were also not invited to the meetings attended by the mayor and the city administrator. “Why don’t they just wait for a permanent customs facility to be built so the diesel can stay on the railroad tracks until it reaches its final destination?” Hernandez asked.

Much of the confusion centered around the degree to which the project has shifted in scale as it has been pitched by different entities. At the November council meeting, the project was described by Newton as “15 trucks a day.” At Monday’s meeting, Port Director Jesus Luis Chavez referred to a plan involving shipments “Mondays and Tuesdays, 75 trucks per day.” Texas Pacifico requires a minimum of 25 rail cars to make a shipment, which would fill around 75 tanker trucks. Each truck takes just under 20 minutes to fill with fuel.

Presidio Municipal Development District Executive Director Jeran Stephens, whose office overlooks the proposed transloading site in the stockyards, was not excited about the prospect of having a front row seat to at least 50 hours of fuel transfer each week. “So for a year, maybe two to three years, we will be living with these trucks — hazmat going through our town past the elementary school, clogging up our traffic, eating up what few asphalt-paved roads we have and blocking entry and exit across the river,” she said. “And we haven’t even gotten into the dangers of this yet. This is just not a good plan. It’s appalling that we’re even having this conversation.”

Stephens hired registered environmental manager Andrew Price to conduct a survey of Presidio that revealed that much of the city’s groundwater is extremely shallow, with many private wells dug just 7 feet below the surface of the ground. All local waterways drain into the Rio Grande, above which the hundreds of diesel trucks passing through each week will hover as they wait to enter Mexico. The Occupational Health and Safety Administration categorizes diesel fuel as hazmat in part because it is “toxic to aquatic life with long-lasting effects.” Presidio is upstream of hundreds of small farms on the Mexican side of the river that depend on clean water to make a living, as well as federally protected stretches in the Big Bend parks and along the Rio Grande Wild and Scenic River corridor that attract millions of visitors every year. “We are going to kill our tourist traffic,” Stephens said.

Much of the confusion swirled around the fact that neither the companies involved nor the city officials could provide a straight answer about economic benefits to the city. “Sounds like there’s a lot of risk, and there’s a lot of momentum,” said local business owner Patrick Manian. “But why is it going to happen? What is the benefit? Why should the city allow this?”

At the January 5 hazmat meeting, Scott Vincent of Strobel Energy Group suggested that the operation could potentially create six jobs in Presidio, relatively high-paying for the area at $24 an hour. The shipping company hired to round out the process would likely be a company in Mexico familiar with local roads and regulations. City Administrator Newton suggested that the city could stand to rake in six cents a gallon in sales tax every time the tanker trucks filled up, but Stephens challenged that notion, pointing out that because Mexico has a nationalized oil company, it’s not likely that a Mexican company would fill up on American fuel when there are Mexican state-owned pumps just a few miles away across the river.

Newton addressed fears that the permitting and inspection process for the tanker trucks is subpar in Mexico. “I can tell you that the standard for trucks that come in from Mexico into the United States supersedes the requirements that we have for our own trucks,” he said. The transloading process would take place on this side of the river because transloading is illegal in Mexico. Mexican officials banned the procedure as part of a larger package of oil industry reforms, due to concerns that the process was harder to regulate from a safety and corruption standpoint.

Port officials explained that it’s up to the City of Presidio to decide if they want the international bridge to be hazmat certified. City council members planned to look into their power to pass hazmat ordinances, and eventually decided that it would be best to host a workshop to field public concerns. That workshop has not yet been scheduled.

“We’re here to support you guys,” said Chavez on behalf of the Presidio Port of Entry. “It’s not our call to do this.”