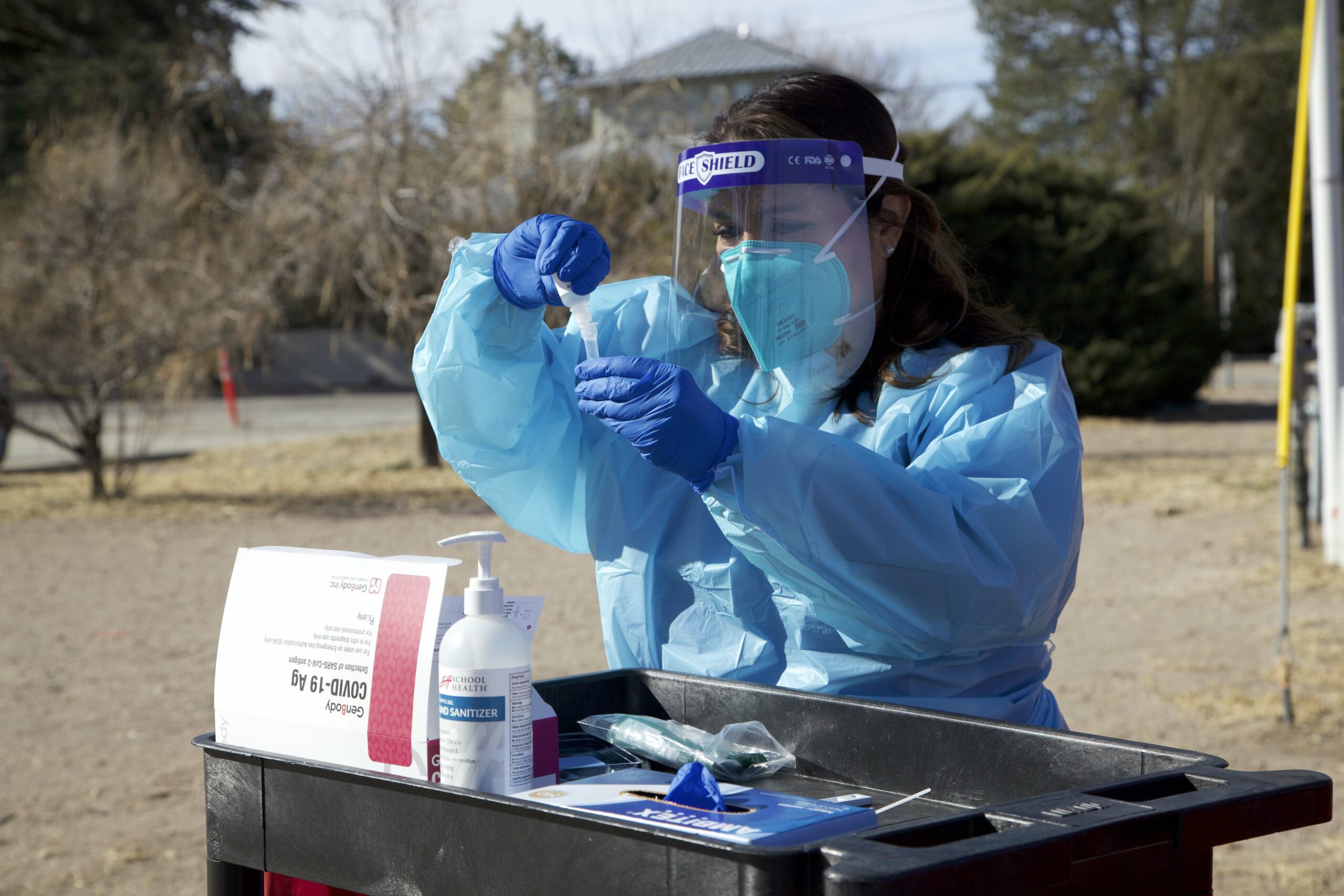 Nurse Beverley Dutchover conducts a drive-through rapid COVID testing site outside of Marfa Elementary School where around 25 cars showed up to get tested on January 17. Photo by Mary Cantrell.
Subscribe

MARFA — For the second week in a row, Marfa ISD has temporarily closed its campus due to a rise in COVID infections as surrounding schools grapple with the virus’ presence among students and staff during a new, uncertain period of the pandemic.

The district announced on Wednesday that all classes will be canceled Thursday, January 20 through the following Monday due to a rise in infections. As of press time, 36 people within the school had tested positive for the virus, according to District Nurse Beverly Dutchover, who was unable to specify how many of those cases were students and how many were staff members.

“When it gets to be that large of a number, we need to shut down and give everybody time to get well and get out of quarantine,” said Scott.

Teachers will still come to school Thursday, Friday and Monday in order to strategize how best to serve students during this time, said Scott.

The campus had just reopened after a brief closure due to a COVID outbreak — classes had been canceled from January 13 to 18, when 13 students and four staff members tested positive for the virus, leaving the schools with insufficient staff to provide instruction.

At the start of the year, Marfa ISD had opted to push back the start of class to January 11, as opposed to earlier in the month, in hopes of giving the virus time to dissipate through the population after the holiday — but even the delay couldn’t stop the highly contagious omicron variant from spreading in the schools.

“We were blessed the last year and a half and it’s finally really got us,” said Superintendent Oscar Aguero. “We aren’t getting out of this one.”

The decision to close schools wasn’t an easy one, said Aguero, but with the rate of infections among teachers at the time of the initial closure, they were left with few options — there were not enough instructors to keep classes going.

With teachers out due to COVID and a shortage of substitutes in the region, their only option would have been to increase class size, putting more kids together, which would have sacrificed safety, said Aguero. While a shortage of substitute teachers is a reported problem nationally, it’s nothing new for Marfa and the surrounding districts, where there aren’t enough teacher absences to justify full-time substitute work. Many substitute teachers in the area help service Marfa, Alpine and Fort Davis ISDs, said Aguero.

Upon returning from the break, most of Marfa ISD’s staff members and students were wearing masks, said Aguero. He said students have been doing well all year regarding mask compliance, and estimated 70% were regularly wearing protective face coverings. Aguero said he would need to reevaluate with the school board on the topic of issuing a mask mandate. Per an executive order signed by Governor Greg Abbott in May 2021, Texas schools are banned from requiring masks, but a number of districts have since violated the ban.

Marfa ISD held free testing on Monday at the elementary school, where around 25 cars showed up to receive free rapid tests from Nurse Beverley Dutchover. School resumed on January 18 with the district encouraging mask wearing and COVID testing for students who may be presenting symptoms, only to close again two days later with the administration reinforcing testing options

Aguero said they were well-stocked with around 150 to 200 tests. Earlier in the pandemic, the district opted into a Texas Education Agency-organized effort to routinely send tests to schools for students, staff and board members.

Aguero said in the past the district hasn’t had success pivoting to virtual learning and it is not a feasible option because of the burden it places on teachers. “It’s hard on teachers,” he said. “It’s already bad enough having to deal with the pandemic, that if we canceled school, we were canceling school.”

Rather than offer remote learning, the school may adjust their calendar to add a few days of instruction. The district planned for nine “bad weather days” for the academic year. Aguero said since the start of the pandemic the school district has worked with the mayor and county judge to implement community-minded actions.

“We were looking at the community as a whole,” said Linda Ojeda, MISD athletic director as well as English teacher for 11th and 12th grades. “We don’t want the elderly and unvaccinated or whoever to suffer because of the decisions that we’re making.”

Ojeda viewed the closure as a precautionary measure to protect the wider community — the school is one of the largest regular gathering places, she said.

“We are like the hub, we’ve got kids coming from everywhere,” said Ojeda.

A few instructors trickled onto campus over the closure, said Ojeda, to pick up materials and try to prepare for the coming weeks of catching students up. After March 2020, Ojeda said teachers are trying their best to stay ahead and keep instruction on schedule despite the ongoing pandemic.

Upon returning from a long break, students are generally off their learning groove, said Ojeda, and it takes time to get their focus back on their studies. That will be another contributing factor to the recent closures, which happened immediately after students’ return from winter break. There’s also a possibility that the students’ state assessment, or STAAR, scores could be negatively impacted.

“Now we’re putting a pause, and then starting again. It does push you back in instruction but also in really getting them in a routine,” said Ojeda. “Ultimately what we look at at the end of the year is how they did on their state assessment. So it has set that back. But it’s the same thing … right now because of what happened in March 2020 they’re already set back.”

Basketball is currently the only sport in season, with both middle and high school teams practicing and competing in games when possible. Basketball teams began practicing in early January before the start of school, said Ojeda. During that time, a few team members missed practice because of a family member’s exposure to the virus, she said.

The first school closure caused one middle school game to be postponed and one canceled. The high school basketball team competed against Van Horn on January 14. At press time, no students on either basketball teams had tested positive for COVID to Ojeda’s knowledge.

Ojeda said there is a local shortage of officials to referee games, which makes it hard to reschedule, but they are doing so when possible.

“We’re just being cautious. A lot of our student athletes are vaccinated, so we feel good about that, but at the same time we’re canceling, forfeiting and postponing what we can,” said Ojeda.

The current phase of the pandemic requires administrators to juggle opposing responses among parents. She says as teachers and coaches they try to cooperate with families regardless of their viewpoints, but many parents are choosing the more cautious route. Recently, out of a 15-member basketball team, only three players showed up for practice, the rest citing they would prefer to stay home in order to limit their exposure, said Ojeda.

“You have those parents saying, ‘Hey, my daughter’s vaccinated. I’m healthy, she’s healthy,’ all these different things, but you have parents saying, ‘Hey, that might be a little risky. I’m not going to do it.’ And that’s understandable as well,” said Ojeda. “You really have to look at both sides of it. I think a lot of the teachers and coaches, even our administrators have been. So hopefully we’re making the best decision for everybody.”

In Alpine, schools have experienced an uptick in COVID infections but have remained open. As of press time, Alpine ISD was reporting 57 student cases, though its online portal for reporting case numbers resets every 10 days for students and every five days for staff. Schools were back in session on the elementary, middle and high school campuses starting January 4. In a message to parents sent January 13, AISD interim Superintendent Dennis McEntire reported 233 absences across all three campuses with 53 confirmed positive cases. In the letter he said closing schools would be a last resort, but would ultimately be a board decision led by available data. Cases have risen, according to the district’s COVID dashboard, since the return of school earlier in the month.

McEntire told The Big Bend Sentinel that while the school district has no current plans to cancel classes, the option is not off the table.

“There are no policies in place at this time,” said McEntire in an email. “The district will adhere to TEA guidelines and the laws of the state in making this decision. The surge at AISD is growing. If the district were to see an exponential growth in numbers or staff were affected at a level that prevented the district from safely conducting classes, closure would be an immediate option for the board.”

McEntire said while there is a shortage of substitutes in Alpine, principals have assured him classes have not been combined due to teacher absences. Paraprofessionals and administrative support staff may help cover classes in lieu of teachers or substitutes, he said.

The district is providing testing, administrators are meeting daily to assess the situation and facilities are being sanitized at least two times a week with commercial grade sprayers and antivirals, according to the superintendent’s letter to parents January 13.

Fort Davis schools, meanwhile, have no plans to close — Fort Davis ISD Superintendent Graydon Hicks told The Big Bend Sentinel that while the district had seen “a few student and staff cases,” it was not a significant enough uptick to prompt any scheduling or curriculum changes.

“Most of our families have been closely monitoring themselves and seeking testing before sending their kids to school,” said Hicks. “I do not anticipate needing to close for remote instruction and learning.”