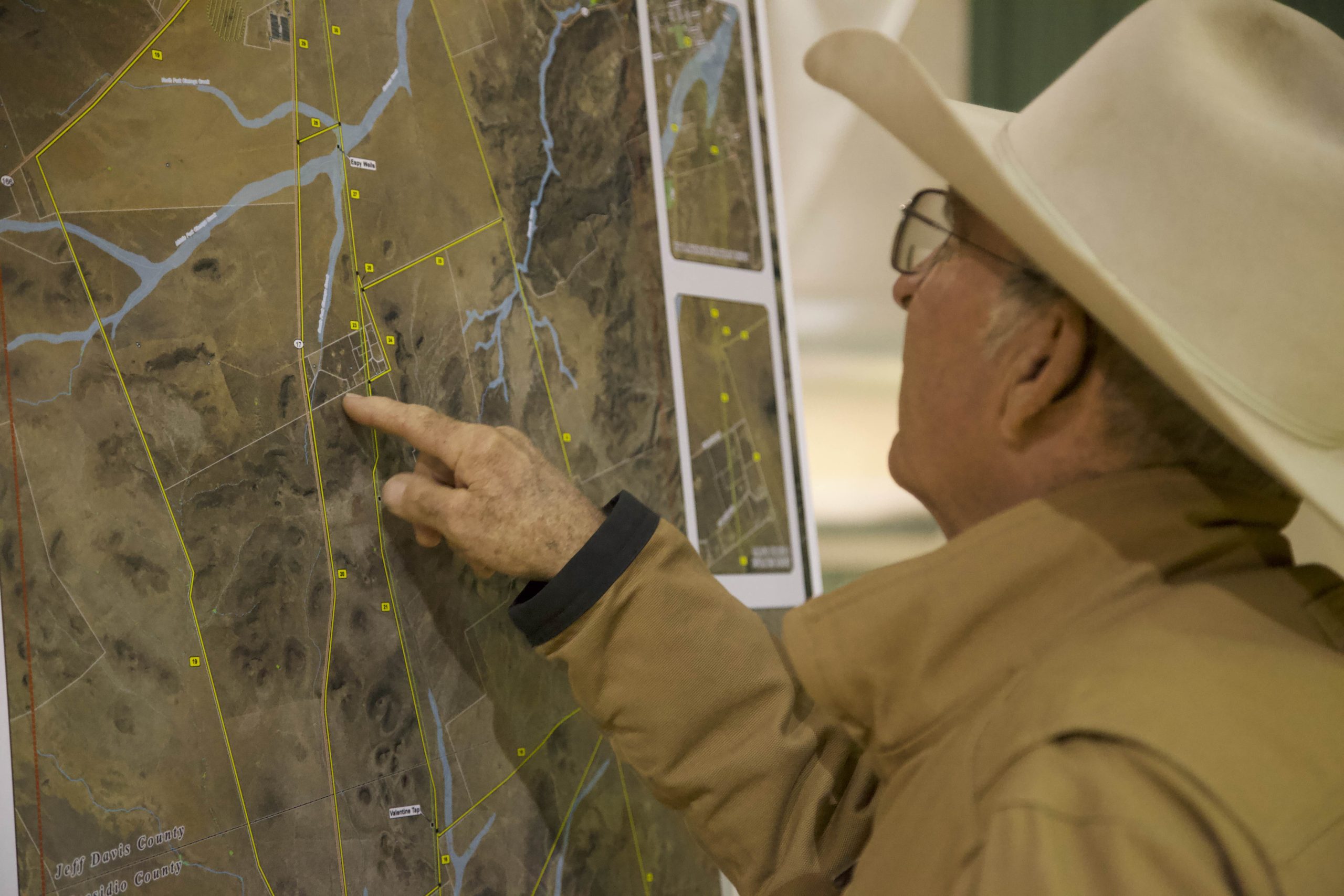 The project’s scope would involve replacing an existing nearly century-old power line that begins at the Alamito Creek substation in Marfa’s Sal Si Puedes neighborhood, runs north adjacent to Texas State Highway 17, and ends at Fort Davis’ substation. The line was selected for the upgrade by AEP due to its age and the fact that it is the singular power supply for Fort Davis. Last week’s open house events, one in Fort Davis and one in Marfa, were put on in order for AEP  to share information with affected landowners and garner feedback about the proposed routes amidst local concern over increased infrastructure and viewsheds.

“The citizens of Fort Davis have to have a powerline, so it needs to go somewhere,” said Blake Burchard, external affairs manager at AEP. “It’s all an information gathering.”

A handful of residents from Fort Davis and Marfa showed up to both meetings, with others only attending one night. Mano Prieto residents, a small neighborhood of around 13 ranches between Marfa and Fort Davis, were well represented.

Judge Mary Ann Luedecke, justice of the peace for Jeff Davis County and Mano Prieto resident, said she knows the new transmission lines are inevitable, but would like to see the lines buried out of a concern for the region’s environmental features, like the dark skies and pristine views.

“I don’t want to see it,” said Luedecke. “I don’t want to put up with the people going through the maintenance on the lines and the destruction of private property. Bury it and be done with it. Because we have to live here from now on.”

Luedecke wasn’t the only concerned citizen to bring up the idea of burying the line, but AEP said it would be far too costly and wasn’t feasible given the level of voltage.

Under the plan, existing wooden poles will be replaced with larger, taller 75- to 85-feet-tall weathered steel poles which would occur every 600 feet and create a 100-foot right of way on either side of each pole, meaning AEP will hold property easements to access the poles for repairs. The poles will be built to 138 kilovolt (kV) capacity, but will continue to operate at 69 kV. The Fort Davis substation is currently a 69 kV station, but could be converted to a 138 kV station like the one in Sal Si Puedes in the future if needed, said Burchard.

Costs for these infrastructure projects are reflected in the prices customers pay for electricity, said Burchard, so electricity rates will likely go up for local AEP customers. That is one of the reasons AEP tries not to overspend on the improvements, he said.

The timeline outlined early 2022 to early 2023 for the Public Utilities Commission (PUC) application and approval process, with construction beginning spring 2023 and concluding early 2024.

After collecting public feedback on the proposed routes, AEP has the opportunity to revise the current route map before submitting their project application to the PUC, who will ultimately determine the final path of the powerlines. Some Sal Si Puedes residents expressed the desire for one more public meeting in order to see how maps change after their feedback is incorporated, but that is not the typical process AEP follows. 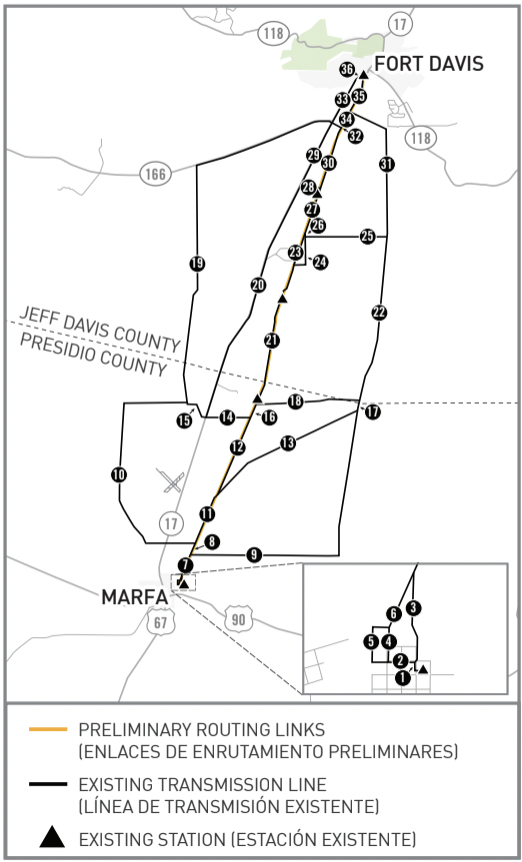 A map showing possible routes for the new electric transmission lines which will connect the Alamito Creek substation just outside of Marfa to Fort Davis. Image courtesy of American Electric Power (AEP).

Sal Si Puedes, a predominantly Hispanic neighborhood, was primarily represented by a few white residents, a problem the community was aware of after an earlier virtual meeting with AEP this fall resulted in a similar turnout.

The Big Bend Sentinel previously reported on some Sal Si Puedes residents’ reactions to the news of the forthcoming transmission line project. Many residents were leery of the supposed “improvements” to their already infrastructure-crowded neighborhood. In providing their feedback about the new route, many mentioned the desire to help remove rather than add additional poles, which is an option on the table.

In order to get the word out about the project, AEP is required to reach out to landowners within 300 feet of the affected area. Some Sal Si Puedes residents took issue with that policy at last week’s meeting, emphasizing the need for input from renters and the neighborhood as a whole, rather than just the directly adjacent properties.

Sal Si Puedes resident Annette Mendoza said she tried to get the word out in the neighborhood about the open house by distributing flyers to around 50 homes. She will now work on passing out AEP’s feedback questionnaires from the open house, but it can be challenging to reach people, she said.

“We have some vacant homes, because the homes were owned generations ago and now relatives just visit and share the property,” Mendoza said.

Despite a low turnout among the neighborhood’s Hispanic residents at the open houses, other Sal Si Puedes community members and Mendoza will try to capture their feedback and concerns about the project to relay to AEP, though there are concerns elderly residents without internet access will be difficult to reach.

“It’s a good thing [the questionnaire] is a hard copy, but then who’s going to pay the postage? It starts getting to feel heavy and almost like we’re defeated before we begin,” Mendoza said.

Construction engineering company Burns & McDonnell generated the proposed routes using a combination of aerial photography and site visits. They will analyze the public’s comments and make recommendations, but it is ultimately up to AEP to decide whether or not to add or subtract routes. Utility companies generally avoid what they call “habitable structures,” said Burns & McDonnell representative Derek Green, but in Sal Si Puedes’ case that is impossible because the substation is located within the neighborhood. 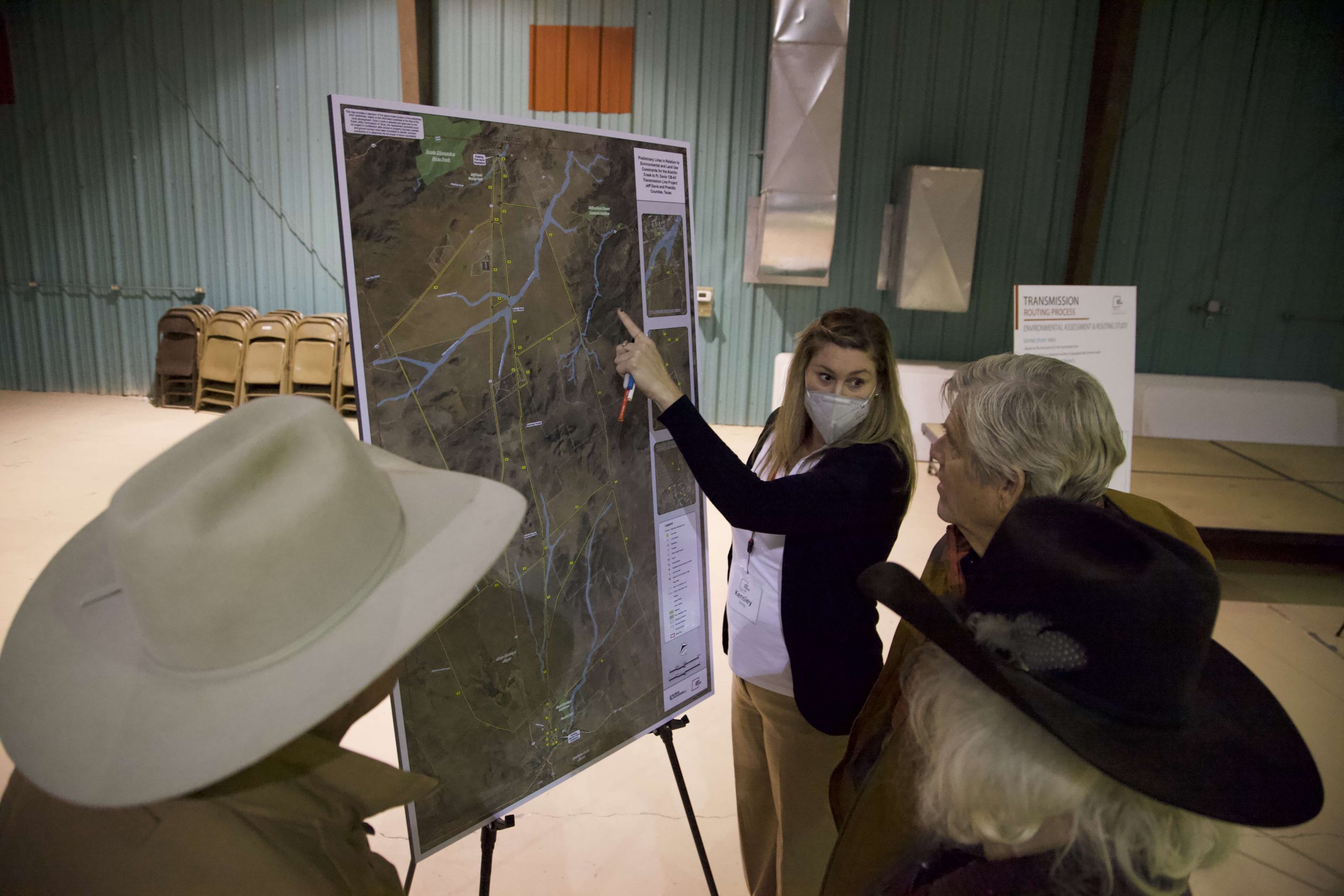 The Alamito Creek substation has been in the Sal Si Puedes neighborhood for several decades. Randy Roper, regulatory case manager with AEP, explained the land the substation sits on was originally sold to AEP by Presidio County, although county tax records do not indicate an exact year. The substation was constructed as a 69 kV and 138 kV facility in 1980, and expanded in 2010 when an existing line going to Presidio was also upgraded.

Residents were given the opportunity to comment on the 2010 expansion, which was when the first steel poles went in, according to AEP. Many Sal Si Puedes residents remembered the look of the neighborhood changing significantly after the 2010 substation upgrades.

There are a total of five power lines going into and out of the Alamito Creek substation in Sal Si Puedes. They extend to Alpine, Presidio, Fort Davis, and to another substation in Marfa, with the final one extending to the Barilla Junction substation between Balmorhea and Fort Stockton.

The Sal Si Puedes neighborhood, an area east of Marfa, is technically outside of the city limits and considered an extra-territorial jurisdiction (ETJ). Sal Si Puedes residents do not pay city property taxes, therefore pay an increased rate for city utilities. There are no local zoning laws that apply to the community, although there are state laws that apply to unincorporated areas.

On the night of the first open house, Sal Si Puedes residents asked whether the line could extend east from the substation before heading north to Fort Davis, a direction with the fewest homes. AEP and their contractors ultimately concluded it was possible, but there were serious complications. Since the east route was not on the original potential route map, it may or may not be included in AEP’s application to the PUC.

When AEP submits their application to the PUC, which they hope to do soon, landowners will be notified by mail. At that point, landowners who oppose or want to advocate for a specific route may do so by becoming a project intervenor and must do so within 45 days of the notice. Becoming an intervenor can involve traveling to Austin for hearings and legal costs if lawyers need to be hired, but it is also possible to go straight to the PUC, said Roy Bermea, an AEP regulatory consultant.

Shelley Bernstein of the Big Bend Conservation Alliance said the organization and Sal Si Puedes residents will work with County Judge Cinderela Guevara and Senator César Blanco’s office to advocate that the public hearing with the PUC be a virtual meeting, as opposed to in-person in Austin.

Rainer Judd, a Sal Si Puedes property owner, said the transmission line improvement project highlights a regional need for more long-term, comprehensive infrastructure planning in the tri-county area. She said it will be important for the communities to unify going forward.

“It seems Fort Davis, Marfa, Presidio and Alpine should all share infrastructure fairly. Right now Marfa, and therefore Sal Si Puedes, is carrying an enormous amount of infrastructure,” said Judd. “What if the tri-county area got together and worked to do a strategic plan for eco-tourism and cultural tourism? What would planning like that look like and how would it help us to engage with other people who come in?”