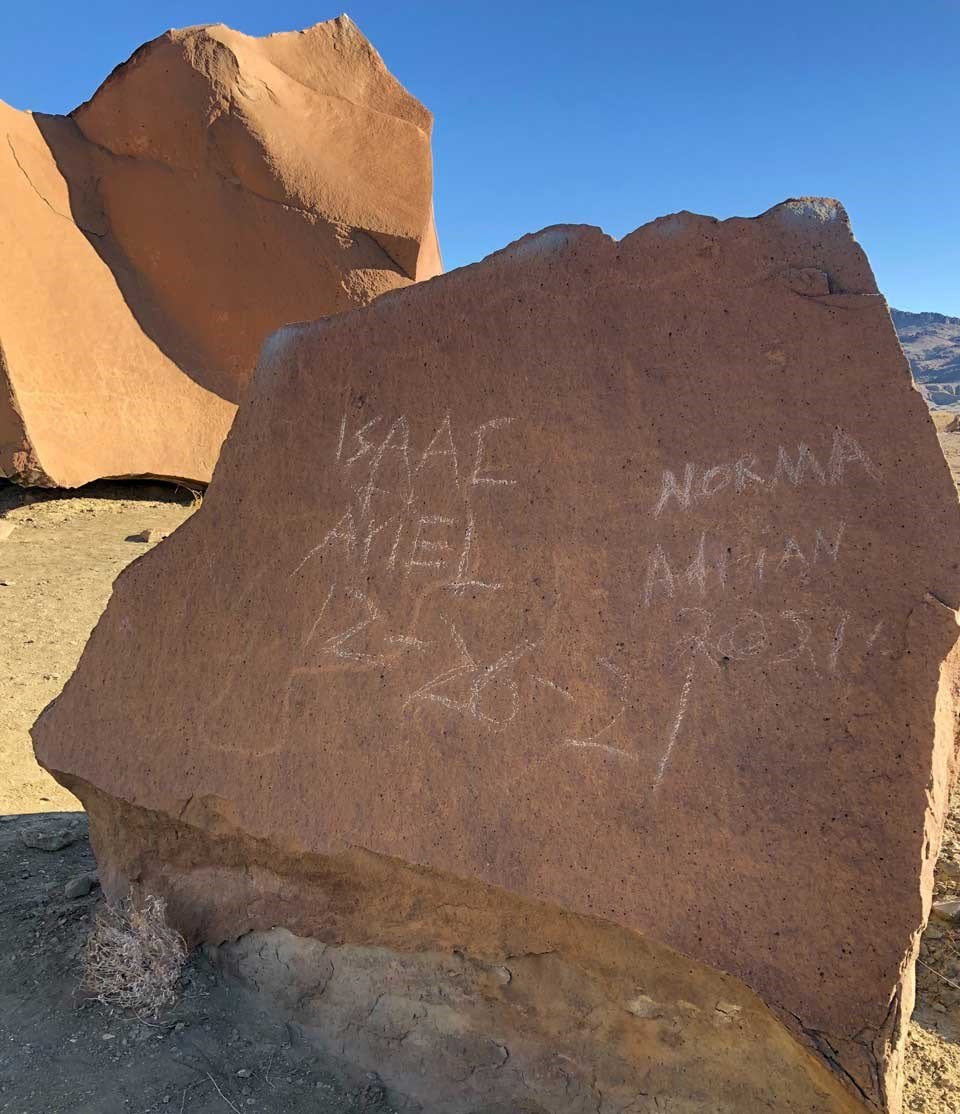 BIG BEND NATIONAL PARK — News of irreparable damage to ancient rock art at one of Big Bend National Park’s historic archaeological sites spread nationwide in early January after the park put out a call for help tracking down the responsible parties. Though the culprits remain at large, authorities have taken action to try and prevent future incidents at a time when vandalism in the park has risen along with an increase in visitors.

At the site known as Indian Head, located in the northwest corner of the park near Terlingua, vandals scratched their names and the date directly over rock art which is estimated to be around 3,000 to 8,000 years old. Tom VandenBerg, chief of interpretation and visitor services at the national park, said while graffiti in the area dates back to 1902, this particular occurrence was alarming.

“[It was] kind of a kick in the gut for those of us that commit our careers to protect places like that. So we decided to put that press release out to ask for help and to raise awareness of the sensitivity of these sites,” said VandenBerg.

The Indian Head area has become increasingly popular in recent years, said VandenBerg — while not being included on the park’s maps, brochures or website, social media posts from visitors have created a draw. As a result, visitation to the site has gone up over the last two years, averaging around 4,000 visitors a year, according to data collected by the park.

Meanwhile, incidents of vandalism in the park have doubled in recent history, averaging around 80 per year the past couple of years, compared to 40 a year from 2015 to 2017, said VandenBerg, who attributed the increase to a spike in visitors. The park’s recently-determined annual 2021 attendance numbers were up 25% from the previous year, and the park has seen nearly a 50% increase in visitors since 2016, with many of those people first-timers to public lands.

“There’s a little bit of a learning curve there,” said VandenBerg. “These are protected places. It’s just not a place to come and write your name on rocks and damage things.”

VandenBerg said while the park’s staff has not increased in conjunction with more visitors, they have recently filled some long unfilled positions and are fully staffed. Of a three-person archeological team, two positions are currently open at the park.

Mitigation measures have been put in place since the incident occurred, including the reinstallation of cameras which have been used on and off throughout the years, said VandenBerg. The park hosts guided tours of the area, but it is not a requirement to be accompanied by a park staff person to visit the site. While the Indian Head site is within the park’s boundaries, it is reached by going through private land, not by going through the park.

“We patrol it fairly regularly, probably as much as any other place in the park because it is sensitive. But it has its own unique challenges because it’s accessed from outside the entrance of the park,” said VandenBerg.

In addition to continuing routine patrols, park staff aim to provide additional signage and establish an informational kiosk to further educate visitors on the sensitivity and protected status of the archeological area.

And then there is the increased surveillance that comes in the age of internet virality and online sleuthing. According to VandenBerg, the Instagram post announcing the incident garnered more attention than any other post in the park’s history, receiving over 9,000 likes and 1,300-plus comments. The story drew the attention of the national media and was covered by outlets including Texas Monthly, The New York Times, and even the Canadian Broadcasting Corporation, CBC Radio.

“We had tremendous interest in it, which was kind of surprising to all of us, honestly — and a little scary at the same time, because we don’t really want to direct a lot of attention at this one specific site,” said VandenBerg. “But with something so egregious as that it’s like, ‘Well, help us out if you know anything — please let us know.’”

The flood of interest from the public resulted in over 50 tips from concerned citizen detectives trying to assist in identifying the vandals. Clear clues in the form of four names — Adrian, Ariel, Isaac and Norma — and the date — 12/26/21 — scratched on the rock informed the search.

“This whole thing sort of became crowd sourced,” said VandenBerg. “There’s people scrolling through social media, trying to find connections from these photos to those photos, and anybody that posted things from Big Bend during that time.”

All credible tips are passed on to the park’s law enforcement rangers, who have been following up on every one, said VandenBerg. Investigations are ongoing, and as of press time there were no major developments in the case. Because it occurred on federal property, the crime is considered a violation of the code of federal regulations. The vandals could face up to a $5,000 fine or six months in prison. Such areas are also protected by the Archaeological Resources Protection Act, which could raise the case to a higher level of penalties, said VandenBerg.

In the meantime, experts have done their best to undo the vandals’ damage, but there was only so much to be done. The day after the park received initial news of the vandalism at Indian Rock, Lin Pruitt, archeology technician, along with retired park archeologist Tom Alex, went out to survey the site and found it looked worse than expected. It was later determined some well-meaning visitors attempted to clean off the newly carved names but in doing so only damaged the site further. Tap water, which can contain trace amounts of chlorine, had been poured over the rock, staining its patina.

Pruitt and Alex spent a couple days rehabbing the surface of the rock, using benign methods of distilled water, artists brushes and absorbent pads to blot the surface. The rock’s appearance was greatly improved after treatments, said VandenBerg, but the names, which appear to have been carved using a sharp rock, will forever remain.

The affected rock art is classified as part of the Pecked Abstract Tradition, a complex, asymmetrical style composed of geometric forms and gridlike lines, considered to be archaic in age — dating back as far as 8,500 years — and found throughout the American Southwest. Desert abstract and geometric figures like the ones found at Indian Head are considered to be some of the oldest imagery in North America, said Alex.

The Indian Head site is home to many petroglyphs produced over a span of time based on the varying degrees of weatherization, said Alex. The imagery represents a time where people were holistically integrated with nature, he said, but much of its underlying meaning remains a mystery to us today, unlike more recent representational petroglyphs of animals and human life.

“It’s only in the more recent time period that representational art was produced. That older archaic stuff is all abstract. So consequently, the meaning of it, we don’t know,” said Alex. “Whatever was in their mental template of how they viewed and how they depicted things is all in their minds. Without knowledge and culture, there’s no way we can touch that.”

These archeological resources are important to preserve so future developments in the field can be made, said Alex. Natural pigments may also be used to conserve rocks, but in this case, because the scrawls were directly on top of the rock art, that treatment method is not an option, said VandenBerg. The exact number of archaeological sites within Big Bend National Park is unknown, but there are at least 3,000.

Oscar Rodriguez, a West Texas native and enrolled member of Lipan Apache Tribe actively fighting to preserve the area’s historic burial sites, echoed VandenBerg, noting the uptick in vandalism could be due to so many newcomers in the region. Rodriguez, by contrast, says he can trace his roots to the Big Bend region well before the 1700s. The history of the region has been passed down in his family for generations.

“These conversations [about these sites] might be a surprise to some folks,” said Rodriguez. “Not to me, I grew up in that. Those were the conversations I had with my parents and grandparents and people from previous generations. To us, we’ve been there a long time. We know it.”

He said acts of vandalism to archeological sites are taken personally by people indigenous to the area. If an archaeological dig discovers human remains, for example, his community will experience that on a different level than more objective researchers, said Rodriguez.

“To those of us who have deep roots in West Texas, we see them as disinterring ancestors as opposed to you know, these archaic people who existed long before human settlement took place in West Texas and these people are not related to us,” said Rodriguez.

He said his ancestors were among a population which migrated to and from North Central Mexico to the Great Plains before settling in Presidio and El Mulato, meaning many sites along those routes were created and revisited, helping demonstrate the specific use of some of the locations. Growing up, he knew of certain ranches in West Texas where people paid an entry fee to collect artifacts such as arrowheads. Rodriguez emphasized further education for younger generations and consequences for when vandalism does occur going forward.

“I think it will be important to catch them and to prosecute them to whatever extent the law allows,” said Rodriguez. “Just so that it becomes part of the public consciousness that there are consequences to doing this.”

A retired park archeologist and resident of the Terlingua area, Alex said off-road traffic in the area has recently increased and the site has a long history of attracting curious transients, dating back to the early 1900s.

“Tourists are coming in, they’re just very disrespectful. They either don’t know, don’t care or maybe both, about private property and scenery and respecting staying on the road,” said Alex. “One of the issues about Indian Head is that one of the old original roads through this country went right past the site. So people were able to drive there and camp out. I’m sure that people hunted arrowheads and god knows what else they did to the area.”

“Closing it off, fencing it off, that kind of thing, only keeps honest people honest. It doesn’t stop the people who want to go in and do any kind of damage,” said Alex. “Disrespectful people are going to do what they want to do regardless.”