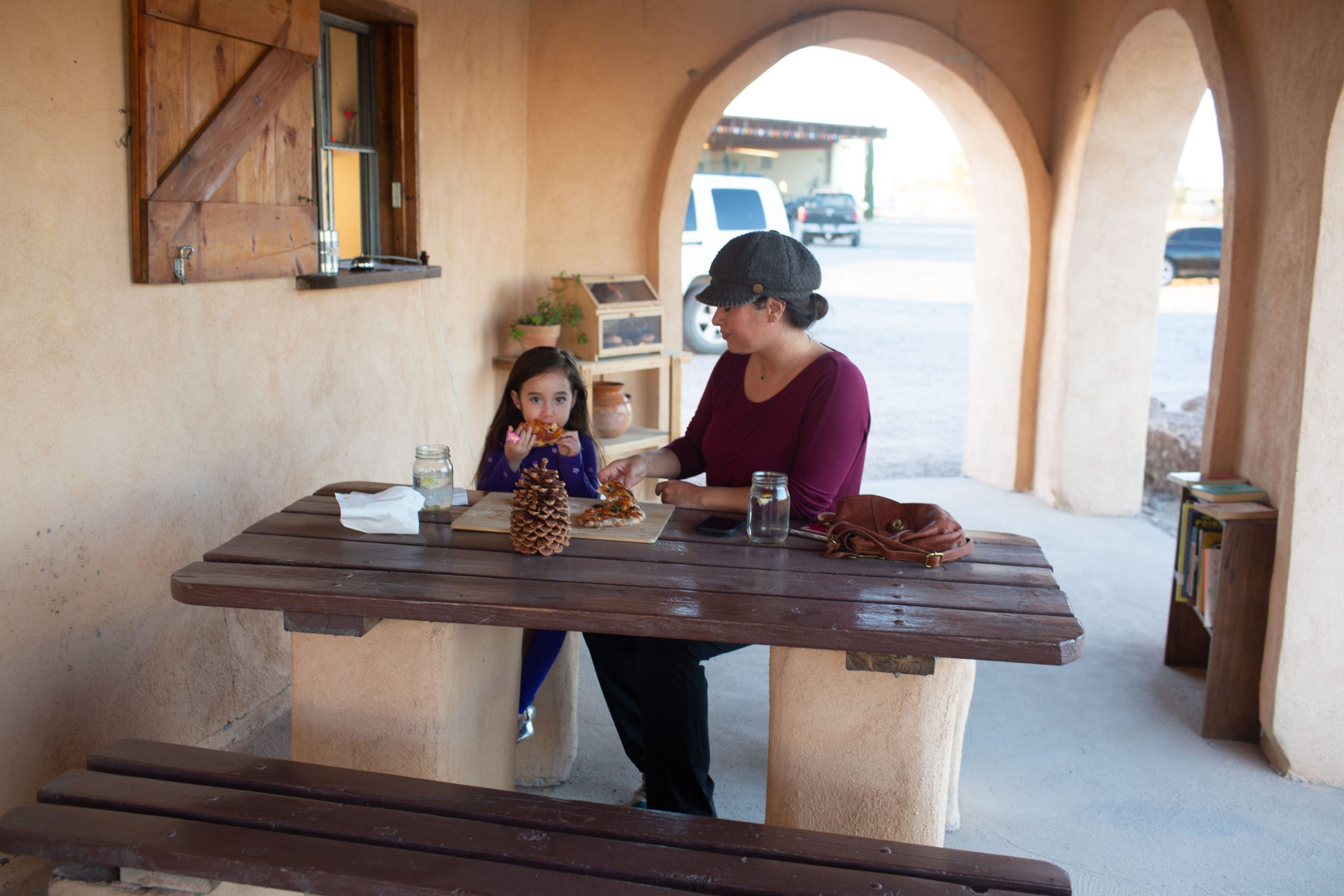 PRESIDIO — In the heavily Catholic town of Presidio, an unlikely figure pops up a few days a week over by the fire station: a big red statue of the Buddha, ecstatically waving down neighbors and visitors for fresh-baked treats. No one can resist, even the padre himself — Santa Teresa’s Father Mike Alcuino has become a regular, meeting parishioners on the patio for fresh-brewed coffee and homemade bagels.

For Diana Wassef and Patrick Manian, owners of Big Buddha Bakery, making good food is a spiritual practice. Two years ago, they made a pilgrimage to the Dai Bosatsu Zendo monastery in upstate New York, seeking respite from the hustle and bustle of the city. In March 2020, the COVID pandemic devastated the East Coast, and the couple decided to stay put at the monastery, where they spent a lot of time in the kitchen. The head chef took notice of the couple’s talent for baking with sourdough. “She really encouraged us. She was like, ‘You two could open a café,’” Manian remembered.

Dai Bosatsu Zendo monastery was a familiar place: Manian had lived there for five months in 2012, studying Zen Buddhism. His interest in Zen started as a young boy, when an uncle gifted him a copy of the book Zen in the Art of Archery by Eugen Herrigel, which can now be found in a small stack of books on Buddhist teachings on the patio at their bakery. He left the monastery after his first residency to focus on incorporating Buddhist principles in his everyday life.

“My experience in New York City working at a tech startup was very convoluted — you do a lot of obscure tasks, and there’d be a lot of money involved. I just wanted to do something more simple,” he explained. “In baking, everything takes a really long time. You have to be patient. You can’t take shortcuts.”

After the couple left the city, Presidio and the Big Bend felt like an obvious choice. Wassef has family roots in Lebanon and Egypt, and felt a deep connection to the desert landscape. In 2016, a friend was moving from Toronto to Vancouver, and decided to take a 1500-mile detour through the Southwest. It was Wassef’s first encounter with the Big Bend. “I fell in love with this desert,” she said. “It’s something I had been dreaming about.”

The couple didn’t visit Presidio on that first trip, but when they returned to the region to scout out a place to settle down, the connection was immediate. They were struck by how close-knit and family-oriented the town is. “It felt like a place that’s far out, but you still have your community,” Wassef explained.

They quickly made friends the best way they knew how: making food. They started small, running a bakery out of their home in Presidio, offering delivery service to places as far flung as Marfa. In January, they were able to open up their brick and mortar in a building on O’Reilly street across from the fire station. Wassef learned from community members that the place had a former life as a restaurant, serving up tacos and Mexican food.

On Thursdays and Sundays, the bakery is open in the morning and early afternoon for fresh-brewed coffee, bagels, sandwiches and bakery items. On Friday they serve pizza, made from a homemade sourdough crust. The Friday night pizza parties have become an instant success: in the first few weeks they’ve been open, locals have lined up outside in their trucks, waiting for their pies. Local Samuel Sanchez has been spotted at the drive-thru window on horseback, picking up grub the old-fashioned Presidio way.

While their focus has been on serving good food for locals, they’ve started networking with other young business owners around the Big Bend who want to make their mark in a region that’s become increasingly pricey. Mateo Mares, owner of Cedar Coffee in Alpine, made the 86-mile journey with his partner Alaina Walton and a vanful of friends for the bakery’s opening night. “I’m happy to support any way I can,” he said. “There already is a good panadería in Presidio, but [Big Buddha] has a different kind of vibe. I think we just happen to both be younger people with similar mindsets. More and more places are getting good coffee — it’s not just the big cities anymore.”

Visiting Presidio for the bakery’s opening party was an eye-opening experience for Mares and Walton, pushing them to spend more time in the area and make connections with locals. “It was always a town that we’d pass through on the way to the River Road or the state park. But now it’s a destination.”

For now, Wassef and Manian are working out the kinks all new business owners face and keeping their focus on providing fresh, homemade food to neighbors and visitors. Keeping everything organic and ethically-sourced is a top priority. “We’re making healthier food, we’re trying to bring organic food, which to me is about the well-being of the Earth and the fact that everything is interconnected,” Manian said. “If you’re going to start anywhere, you might as well start with food and drink, because that’s what we need to survive.”

It’s difficult to get fresh, organic items in Presidio, but the couple has had 18 months of practice shopping for the kinds of dishes they make at home for themselves. “It’s not the easiest. But it’s so rewarding to know that I’m not taking shortcuts,” Wassef said.

“Food has a way,” she continued. “There’s a connection that happens. This is something that goes back to my culture — food is very important. It’s the way we express our hospitality. It’s the way we show our love.”