‘A pool for all’ : City of Marfa looks toward the future of its aquatic amenities 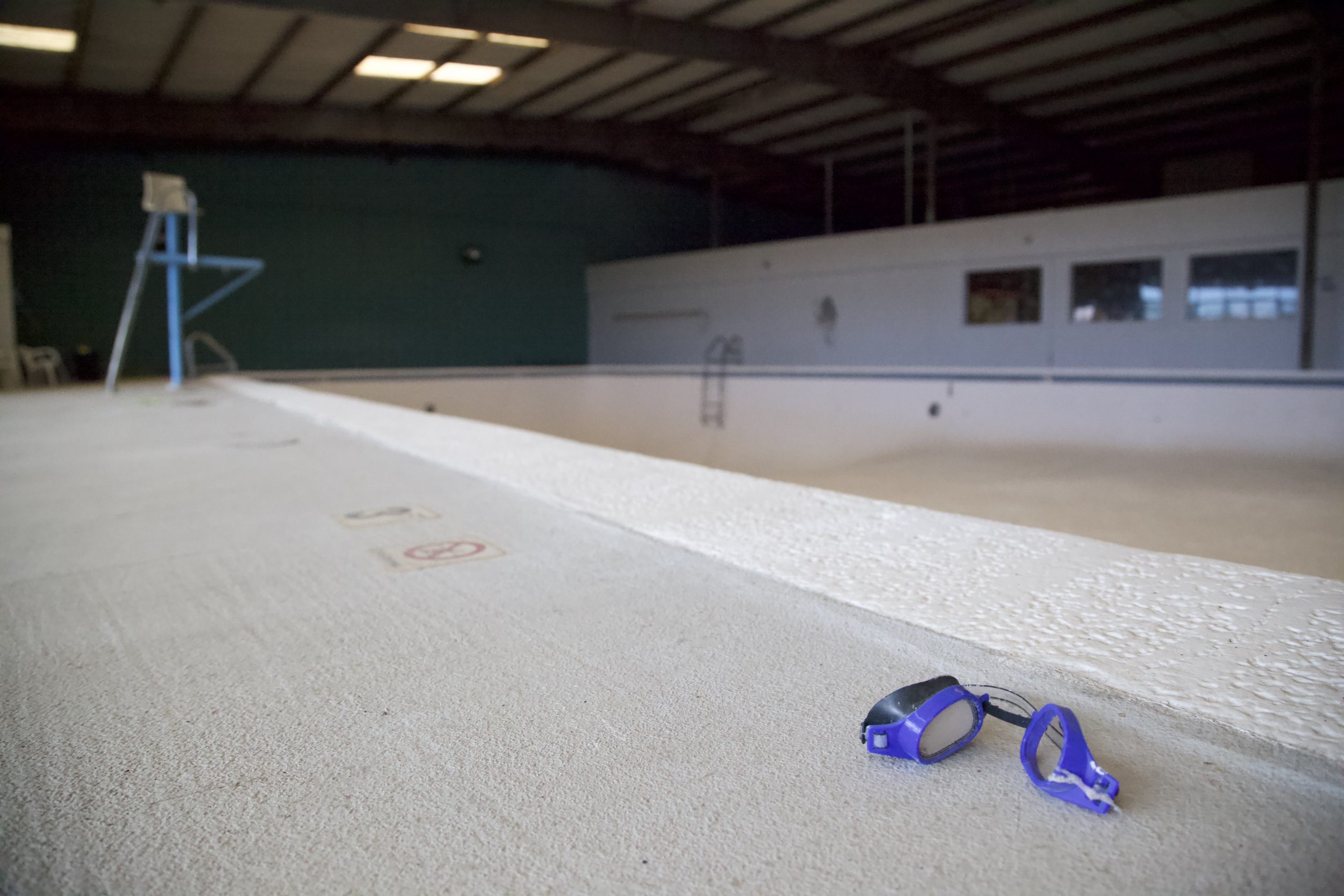 A new feasibility study, headed by the City of Marfa, focuses on the town’s singular public pool, which is experiencing aging infrastructure and has been closed since 2020. On Tuesday, local swimmers gathered to share their comments, concerns and future wishes for the site. Photo by Mary Cantrell.
Subscribe

MARFA — A small but energetic crowd of avid swimmers met with city officials on Tuesday to discuss the future of Marfa’s only public swimming pool, which was indefinitely closed in the early days of the pandemic. With a feasibility study underway, officials have yet to determine whether to improve on the existing pool or build an entirely new one.

City council made the decision to shutter the Marfa Activities Center pool in May 2020, citing COVID precautions, but the pool has remained closed ever since. The aging facility, which was built in the early 1960s, is riddled with leaks, cracks and other structural issues, officials said. The 100,000 gallon pool is currently leaking around an inch a day, said Councilmember Buck Johnston, who met with Public Works Supervisor Chuck Salgado and other pool officials earlier that day.

“Moving forward, our facility is getting older, but we’re seeing that it’s definitely multi-generational — different segments of our community are using it. So it needs to be a pool for all,” said Johnston when kicking off the meeting.

Johnston repeated past assurances that the current pool will be reopened in time for the upcoming summer season. Marfa’s Parks and Recreation Board budgeted $10,000 to repair the broken solar panels that heat the pool, which are scheduled to be repaired by this May.

Whether the city decides to improve on the existing infrastructure or build an entirely new facility, a feasibility study performed by professionals is needed in order to apply for grant funding and move toward next steps, explained Johnston.

George Deines of aquatic design, planning and operations company Counsilman-Hunsaker gave a presentation on new pool possibilities, from features like waterslides, rock walls, lazy rivers and lounge areas, to examples of the company’s past projects and enclosure options. Many of the modern aquatic facilities emphasized a mixture of recreational and wellness uses. The company is currently in the phase of gathering community feedback to inform the study.

Most attendees who spoke up favored a year-round indoor facility, with the option to open up ceilings or windows and plenty of shade over any outdoor features.

Jennifer Esperanza, owner of Highland Street shop Esperanza Vintage, was the first to speak up in defense of the current pool during the public comment period. With a background as a lifeguard and swimming instructor, she said she relished the ability to swim and advocated for trying to repair the existing pool before overhauling the whole structure.

“It’s a fantastic pool. I mean, could there be a better pool someday? Sure, probably. But it’s not a terrible pool,” Esperanza said. “We swam there every day until it closed — there were water aerobics and swimming. It was dirty — I mean that it wasn’t kept clean. The decks weren’t kept clean, the bathrooms weren’t kept clean.”

Many others who regularly utilized the pool agreed it was haphazardly run, but they were ultimately thankful it was open, and said it was an amazing place for the community to come together. Local artist Camp Bosworth didn’t share Esperanza’s nostalgia for the Marfa pool and took issue with its lack of lane lines and natural light, depth and inability to install a safe diving board. He said an entirely new pool would open up possibilities for more space for outdoor recreation like family picnics.

Bosworth, along with other participants who said they grew up swimming, would like to see a more kid-friendly pool for Marfa’s children. The only pool currently operating in the city is at the Hotel Saint George, where entry is limited to hotel guests or swimmers 21 and older, with a hefty $30 entry fee.

“There’s a lot of kids here that never even learn how to swim. It’s a life skill,” said Bosworth.

The subject of whether or not Marfa schools could develop a competitive swim team was also broached, with a few stating that regardless, an improved pool would be used more frequently by other types of athletes. A more professional pool could even bring in training triathletes, since Marfa is at a desired elevation, said newly-appointed Parks and Recreation Boardmember Molly Barker.

Others raised concerns regarding how the new facility would be staffed, given the labor shortage in the area. Life guards could be high school students, said some, or be visiting lifeguards on workshare with provided housing.

Johnston said they intend to budget for a full-time aquatics director to oversee the facility, and there’s a possibility that the city could hire a company to run the pool on their behalf. She emphasized that the project is in its very preliminary stages.

“Make the tourists pay for this pool. We deserve something. This town has become really catering to the tourists,” said Beeman. “Let tourism start paying back the town, for the amount of work and what we put into this town.”

The structure of the pool’s admission rates also came up in the meeting — tourists could pay a day rate to use the pool, with locals possibly purchasing annual passes. Fees for pool parties could be a revenue generator for the city, some suggested. Mendoza emphasized the need for one free pass or a free day for kids to get them excited about meeting at the pool over the summer.

In the meantime, the majority of those present pushed to see the pool open for residents as its future is decided. Many mentioned enjoying views of the train while swimming and felt the overall location of the pool was solid. Trey Gerfers, Parks and Recreation Board President, mentioned the pool’s views might be opened up a bit to include the mountains to the east and west.

“I don’t think anyone disagrees that the pool is awesome where it is,” said Gerfers “I think it just could be so much more. I mean, why does the parking lot have the best view?”

He said the Parks and Recreation Board will work to keep the pool open for Marfa residents while dreaming big for the future of the site.

“We’re committed to trying to figure out how to keep the pool open, but also how to give us something that’s good, you know, make that investment,” said Gerfers. “So we’ll have a pool for another generation or two that’s a real focal point for the town, a real meeting place.”

Others agreed a new and improved town pool would be a symbolic gesture from the city, showing it cares about its residents, not just its out-of-town visitors. Deines of Counsilman-Hunsaker will present their findings to the city council at a public meeting on the last Thursday in April.

Marfa pool
Stay in touch with The Sentinel
Related