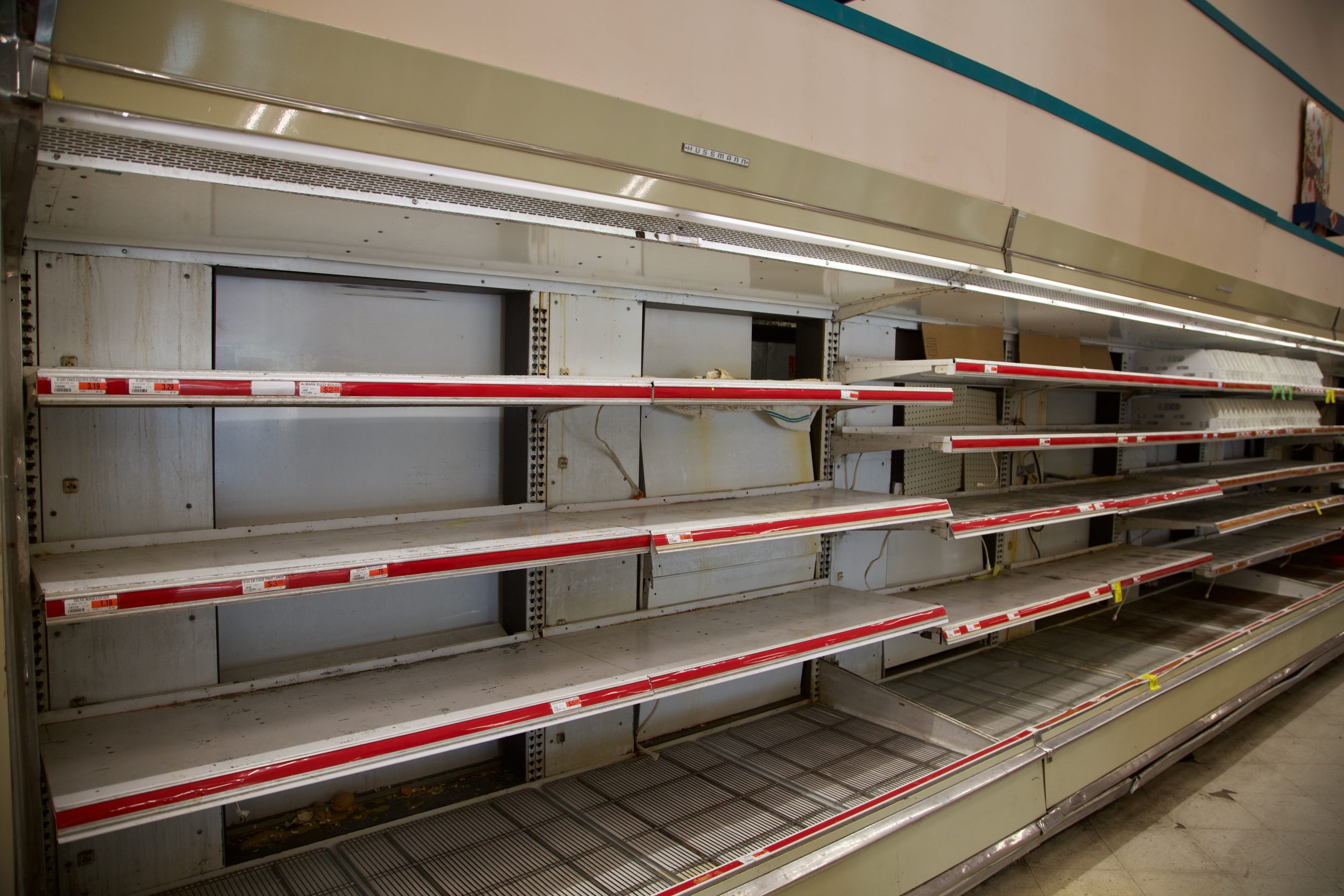 Grocery store coolers and shelves were cleaned out earlier this week at the Alpine Porter’s on 2nd Street, which was running heavy discounts to clear out inventory ahead of the location closing for a large-scale renovation. Photo by Mary Cantrell.
Subscribe

ALPINE — The Porter’s on 2nd Street in Alpine will lock its sliding doors to customers this week while the grocery store undergoes a large-scale renovation, with an expected completion in November 2022.

One of two Porter’s in Alpine — a city of just over 6,000 residents, according to the 2020 Census — the months-long closure will lead to an influx of customers at the other local Porter’s located on Sul Ross Avenue. Cashiers at that location reported a recent uptick in customers, with crowded grocery aisles and a congested parking lot.

“We ask that our customers in Alpine bear with us — we understand the enormous amount of trust you put in us to provide you with your grocery essentials. Going down to one location when the community is accustomed to two will definitely increase the traffic experienced at this location,” Porter’s recently wrote in an announcement on their website.

Ky Ellison, PR and marketing liaison with Porter’s corporate office, said all Porter’s 2nd Street employees will retain their employment, but some may shift roles depending on the needs of the Sul Ross Avenue location. They will also order more food to stock that location, he said.

“We will be receiving additional deliveries to match pace with demand. With the additional team members from our 2nd Street location, we will begin stocking trucks overnight to try and ease the traffic in-store as much as possible,” said Ellison.

Customers with overflowing carts stocked up on heavily-discounted items at the Porter’s on 2nd Street through the weekend and early into the week as the store cleared out its inventory. The grocery store provides food for Alpine locals, but also serves surrounding communities like Marathon and Terlingua that do not have stores with the same level of inventory.

Stan Nelson, a Marathon-based repairman and resident of experimental eco community and guest accommodations La Loma Del Chivo, was stocking up on hospitality supplies like soap, plus margarita mix and beer for their deck parties.

“I’m getting tons of stuff for myself as well. I’ve already been here three times, spent like $300 I’m stocked up. I got family coming in March and the only concern I have is where to put all this stuff,” said Nelson. 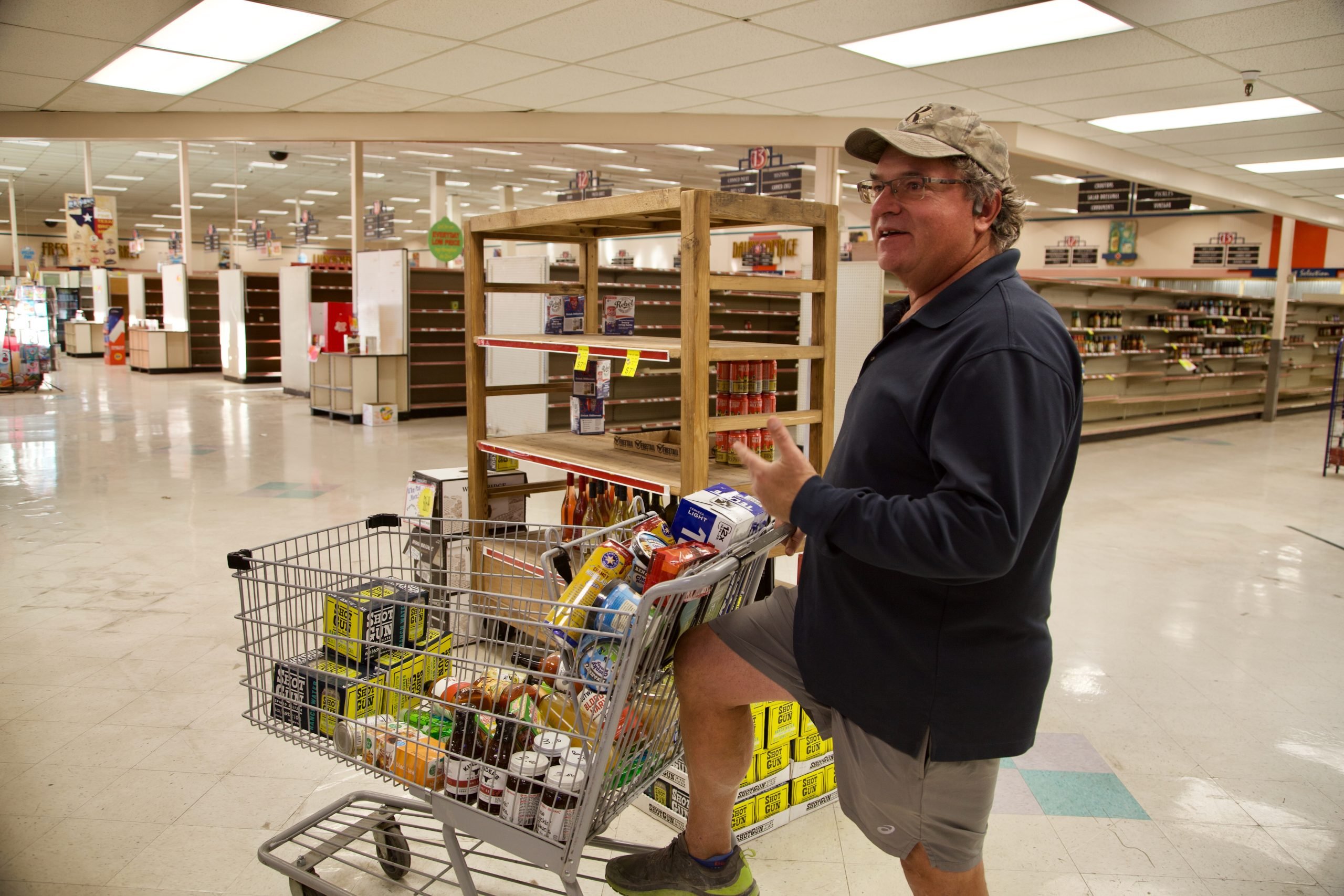 Marathon resident Stan Nelson stocks up on discounted goods at the Alpine Porter’s on 2nd Street, which will soon close for a nearly year-long renovation. Photo by Mary Cantrell.

Nelson regularly commutes to Alpine for groceries, but Porter’s has limited options and he’d ideally like to see an independent produce and meat market, he said.

“I’m not thrilled with Porter’s by any stretch of the imagination. But yeah, get a monopoly and they’re gonna make money and that’s the way it is,” said Nelson.

Keri Mac, Big Bend National Park volunteer, made the trek to the closing Porter’s from the park with her husband to purchase wine and other marked-down goods. She said the closest market to the park, Cottonwood General Store, often doesn’t have fruit and other items they need. Getting certain groceries can be a hustle, requiring Far West Texans to visit multiple grocers just to get everything on their lists. Mac was on route to the other Porter’s for her dairy products, she said.

Porter’s has been operating in Far West Texas since 1945. They are currently also remodeling a defunct Shopko in Presidio on Highway 67, but the opening has been continuously delayed, and stock is low at the old Porter’s which will close when the new one opens. Porter’s will soon break ground on an entirely new building in Fort Davis on State Street and Douglas Drive.

At the 2nd Street location in Alpine, the exterior will be remodeled and the interior will be completely gutted and redone. The building, which previously served as a Safeway grocery store, sustained equipment and interior failures as a result of old patch jobs, said Ellison, which led them to prioritize a building overhaul. The parking lot is still being assessed, he said.

The newly revamped grocery store will include all new equipment including coolers, registers and self-checkout lanes. Porter’s is also adding a hot deli, bakery and an in-store smoker to provide brisket, ribs, chicken and more. They intend to increase their selection of natural and organic products as well, said Ellison.

porter's
Stay in touch with The Sentinel
Related