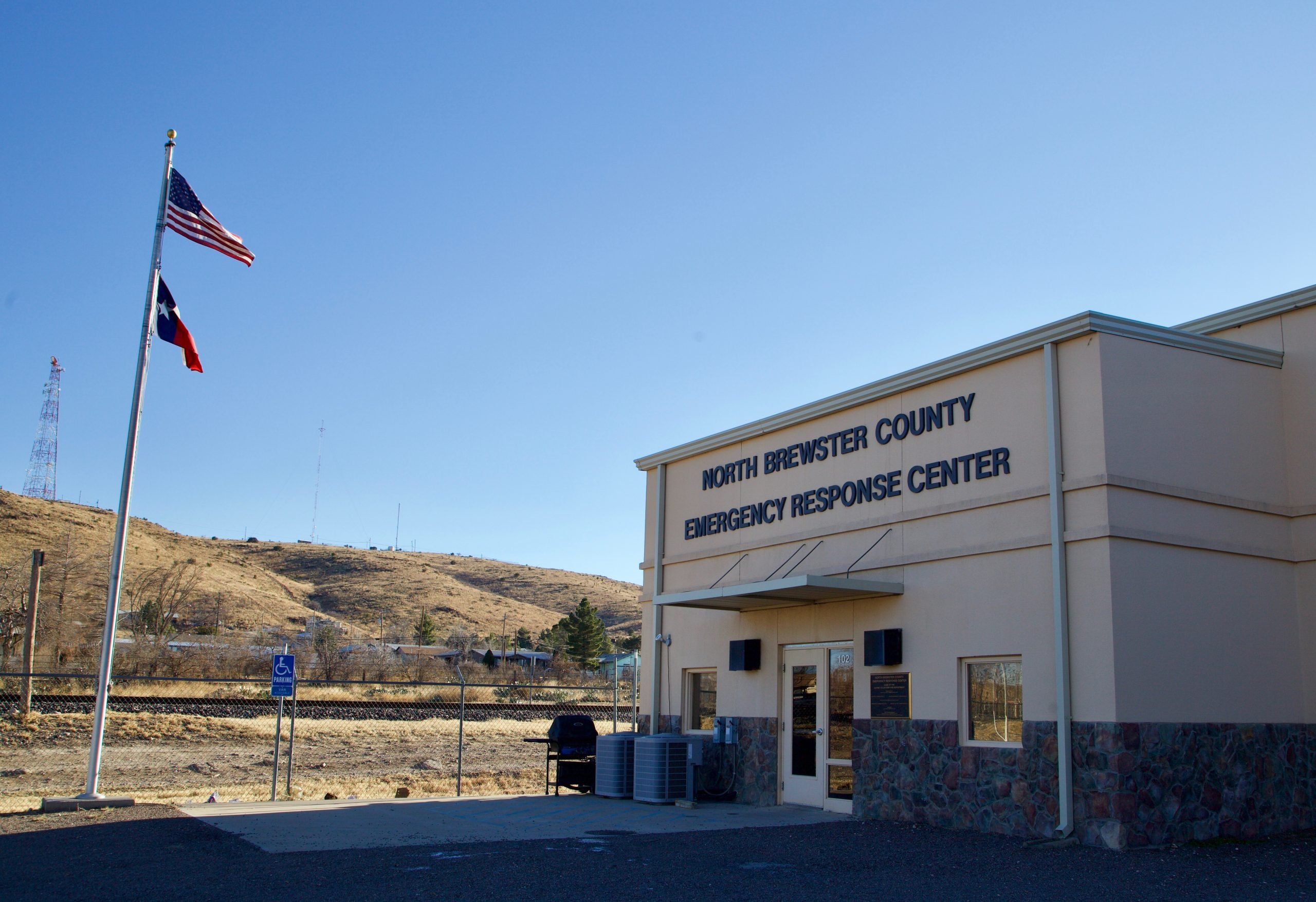 Terlingua Fire and EMS is leasing ambulances from the now-defunct West Texas Ambulance Service, or Alpine EMS, and running them out of the North Brewster Emergency Response Center while county officials seek a new EMS provider. Photo by Mary Cantrell.
Subscribe

BREWSTER COUNTY — Northern Brewster County was recently left without an emergency medical service provider after the longtime operator of West Texas Ambulance Service, Michael Scudder, died suddenly while responding to a 911 call. Terlingua Fire and EMS has stepped up to fill the service gap for 120 days, but county officials and an assembled task force are under the gun to establish new services as the April 30 deadline approaches.

“The clock is ticking as far as what [Terlingua Fire and EMS] is able to do,” said Brewster County Judge Eleazar Cano in a commissioners court meeting on Tuesday. “I would hope by this time next month the transition would be started.”

The county is currently deciding whether to implement a county-run, Big Bend Regional Medical Center-run, or private for-profit company-run EMS service. A service run by the Big Bend Regional Hospital District was previously under consideration, but the district has since bowed out, though its leadership expressed willingness to provide financial support for the new operation.

County commissioners and Judge Cano stressed the need for more information and better numbers at Tuesday’s meeting in order to measure their options against one another. Most recently, the City of Alpine put out a request for qualifications for EMS. The EMS task force is set to meet this week to analyze budget and staffing models and assess the cost of a county-run EMS. They are also awaiting a proposal from Big Bend Regional Medical Center to see what an EMS solution out of their facility might entail.

The crux of the matter officials keep returning to is how much money it’s all going to cost. Upon analyzing the numbers, officials were wondering exactly how Scudder managed to run Alpine EMS successfully for so many years.

“Honestly, a lot of what the Scudders were doing, so much of their time and effort was almost pro bono. I’m not sure how they were living,” said Cano.

Commissioner Jim Westermann said Scudder’s ambulance service was receiving $336,000 worth of subsidies a year from the county and city combined. Westermann put forth the idea that the transfer money Scudder was making running the ambulance to and from the hospital to the airport was likely accounting for around $450,000 of the company’s revenue and helping make the business viable.

“That was the missing piece, ‘How did they make it work?’ Well, they didn’t make it on what the city was paying, or the county was paying, they were supplementing that with their own money,” said Westermann.

County Commissioner Ruben Ortega said he wasn’t impressed with previous EMS coverage of the Marathon area and reminded the court of the reality of emergency situations in rural areas, which often require a greater level of citizen intervention. As it stands, those who experience an emergency in Marathon are better off driving to Alpine for treatment rather than waiting for the arrival of an ambulance, he said.

“If you get a call in Marathon you better load ‘em up in your car and head this way and then call the ambulance to meet you,” said Ortega.

During the brief EMS update, the court reiterated previous concerns over personnel and how they would attract EMTs and paramedics to live and work in the area. Ortega insisted housing be a part of the compensation package assembled for the medical care workers.

In a phone interview, Big Bend Regional Hospital District Executive Director J.D. Newsom, who is also a part of the EMS task force, said staffing is one of the primary challenges. Brewster County will be competing with Reeves and Pecos counties, said Newsom, where EMTs and paramedics are well-paid.

But EMTs’ schedules — 48 hours on, 96 hours off — allow them to pick up shifts in neighboring counties, which they often do, said Newsom.

The newly-established EMS provider will have a lot of hoops to jump through at the beginning, said Newsom, including obtaining proper licensing and supplies. While Terlingua Fire and EMS is currently leasing the old Alpine EMS ambulances from Scudder’s estate, at some point the new operation will need to purchase their own ambulances due to the fact that the existing ones have a lot of mileage, said Newsom.

“It’s important that they’re reliable. The last thing you want is to break down on an emergency call. So it’s critical that they’re in perfect operating condition,” said Newsom.

New ambulances can cost $250,000 to $300,000. The hospital district has provided grant money to the cities of Marfa and Presidio to purchase new ambulances in the past and would likely assist with start-up costs for Alpine’s new operation. But getting ambulances quickly may be an issue, as it has been in Presidio, where the vehicle’s chassis has been unavailable since funding was awarded last year due to supply chain issues.

According to Newsom, the decision to scrap the possibility of a service run by the hospital district is due to inadequate time to collaborate with all necessary parties.

“When the hospital district board met they were really hesitant to jump in and take over operations for Brewster County EMS — we hadn’t been able to get all the regional partners together to even look at if a regional solution was something that we all wanted to move towards,” said Newsom.

BBRHD serves Presidio and Brewster counties. A total of four individual EMS providers operate in the region — those run by the cities of Marfa and Presidio, Terlingua Fire and EMS, and what was Alpine EMS, previously run by Scudder. While they are working against the clock to get northern Brewster County stabilized, he said he suspects in the near future regional partners will have more time to dig into a deeper planning and detailed analysis of what a unified EMS provider would look like.

“It’s going to get harder and harder for all of these EMS providers to run their operations,” said Newsom. “I think there is a really good case for consolidation, but it’s something that’s going to take quite a bit of time to work through.”

Major challenges facing individual providers of staffing, medical direction and the cost of ambulances could be alleviated by merging regional operations, said Newsom. There’s also the possibility of creating a central supply depot for medications and supplies.

“You can get better deals, you can manage those medications better. There will definitely be cost savings on that front as well,” said Newsom.

Each EMS service provider is required to have a medical doctor oversee their protocols and services. In many cases those individuals are experienced in emergency medicine but are often serving on a volunteer basis.

“Some of them are aging, some of them are overwhelmed and don’t want to do it anymore. The challenge is that we need this medical direction but it’s harder and harder to find doctors willing to do it,” said Newsom.

Once operations are scaled up, it is also easier to attract local talent and provide more training, hopefully incentivizing locals to become EMTs and paramedics who continue to live in their community, said Newsom.

This fall, BBRHD applied for a $5 million USDA emergency rural healthcare grant which would establish community paramedicine programs in Presidio and Terlingua. The grant would allow the hospital district to hire paramedics to do house calls and assist those with chronic diseases. The grant, if awarded, would allocate funds for a new ambulance for the city of Presidio and a new rescue vehicle for Terlingua Fire and EMS.

Another initiative of the grant would fund a partnership with Texas Tech’s Health Science Center in El Paso, who would help with medical direction, protocols and training. Newsom said they expect to receive news of their application this March, but such goals and programs could bode well for the future of a unified bi-county EMS provider.

“We’ll establish an EMS Academy, where Texas Tech will be our training partner, to really elevate the skills of our first responders. Initiatives like that become a lot easier to do and implement on a consistent basis region-wide if we’re looking at a regional approach,” said Newsom.