Let Your Body Talk: Artists Joey Fauerso and Gyan Shrosbree mount a collaborative exhibition that plays with color and form 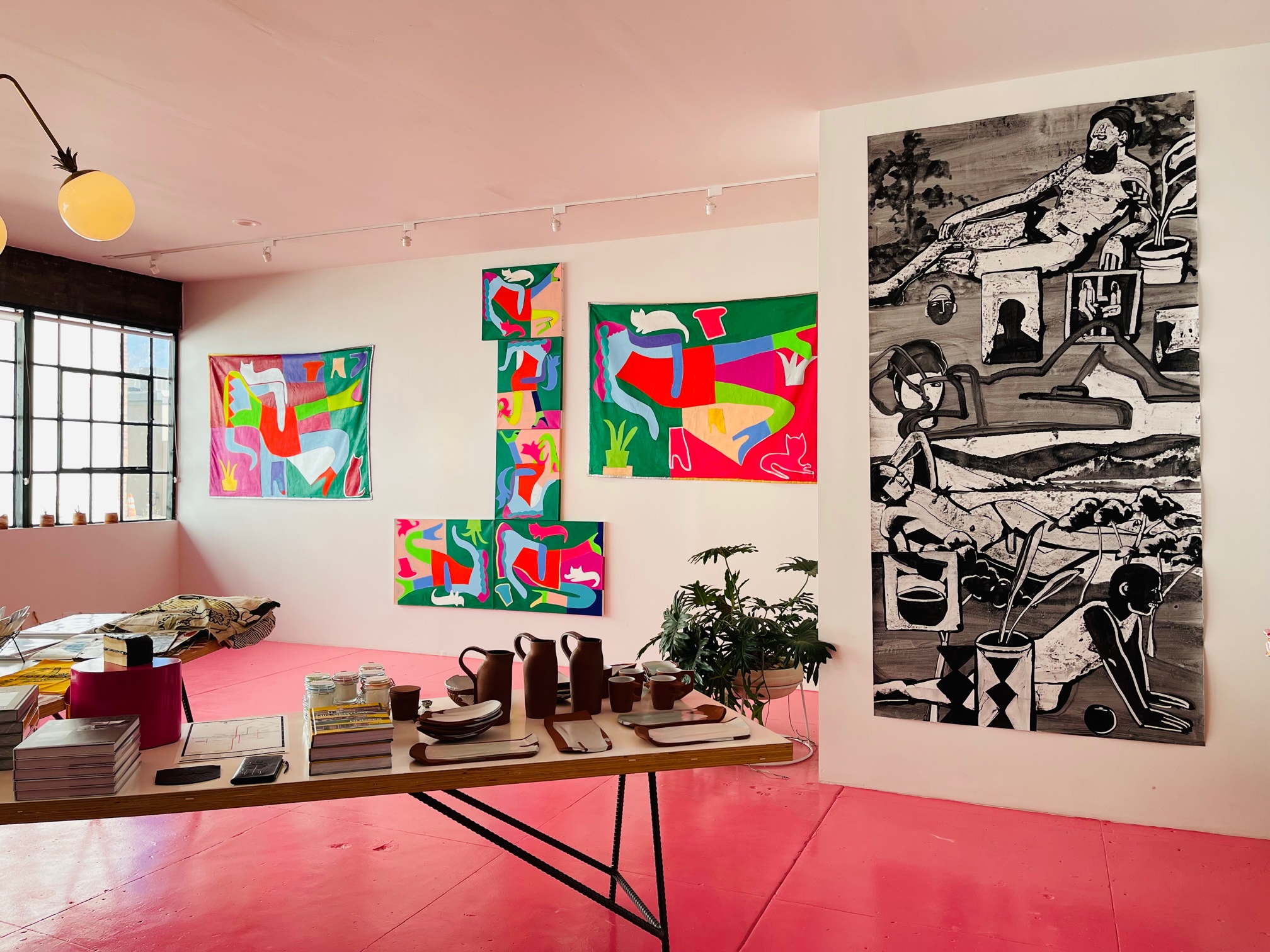 MARFA — Neon pink and yellow plants, shoes and figures fuse with textural black and white woodcuts, shapes and canvases in Let Me Hear Your Body Talk, a new exhibition by lifelong friends and artistic collaborators Joey Fauerso and Gyan Shrosbree.

The dual-location exhibition will be on view until mid-May by appointment at Do Right Hall and during regular hours at the Wrong Store. Do Right Hall, which previously served as the Wrong Store before it moved onto Highland Street, is now an artist residency and exhibition space operated by owners Buck Johnston and Camp Bosworth.

Fauerso and Shrosbree grew up together in their hometown of Fairfield, Iowa, where Shrosbree now works as an art professor at Maharishi International University. Fauerso, too, works as an art professor at Texas State University in San Marcos. The two have maintained a relationship over the years, continually connecting over their lives as artists and themes they explore in their work, they said. 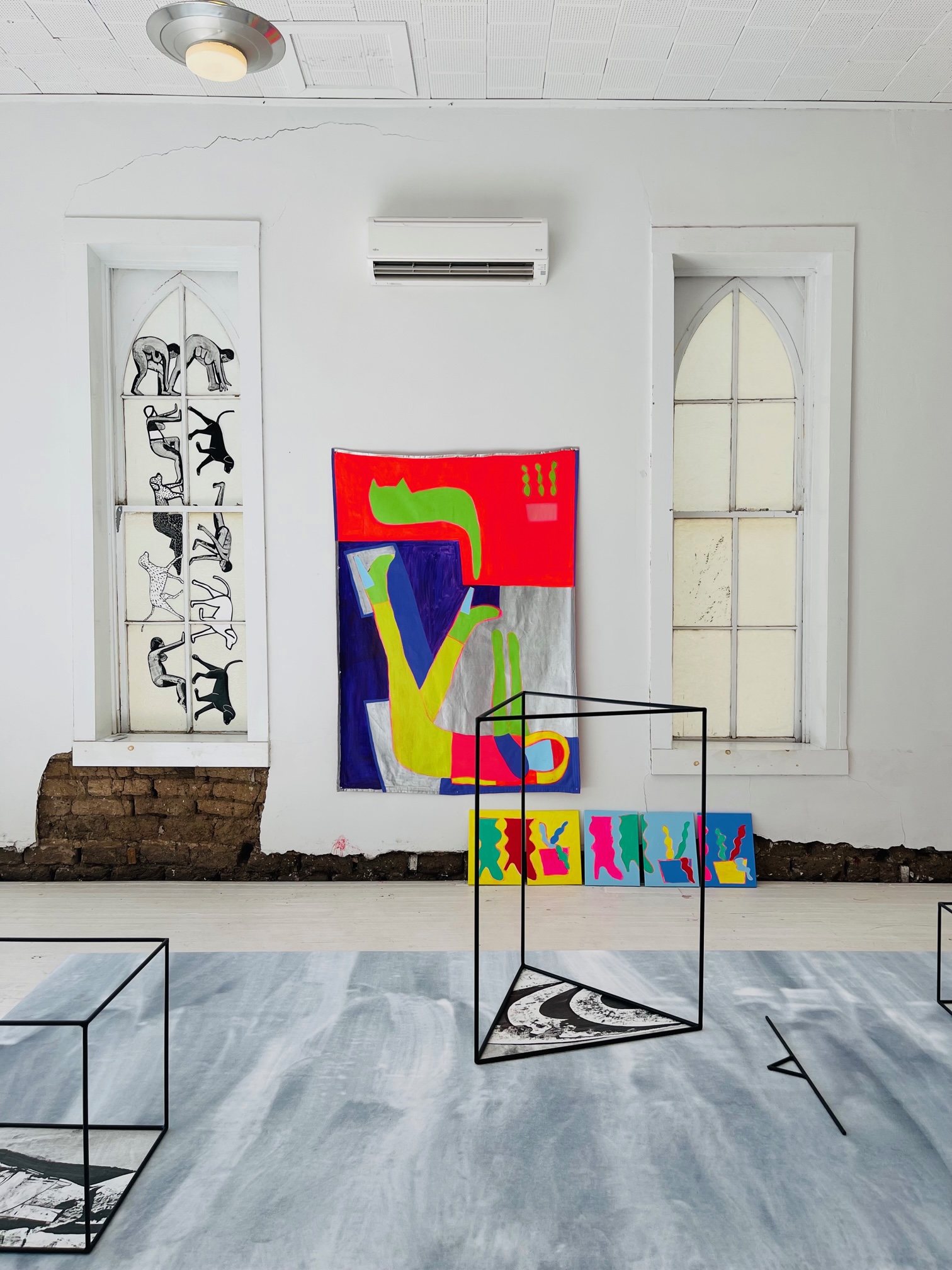 While the pair differ in how they approach the act of painting, they overlap in terms of the content they explore in their work, said Fauerso.

“We both have an interest in thinking about the history of figurative painting through a feminist lens and through our own experiences as women artists,” said Fauerso.

In addition to reflecting on their roles as women artists, both inject a sense of humor into their work and share themes of the body, interior spaces and home life. They also present collections of objects or figures which become shuffled and reshuffled to take on new meaning, said Fauerso.

Shrosbree said both she and Fauerso tend to pull inspiration from their personal lives and have learned to keep creating work no matter the circumstances.

“Both of us are traditional and nontraditional at the same time. We both are studio artists and we want to be in our studios all the time, but we also understand that we can’t always do that. I think making a studio wherever is something we’re both pretty familiar with,” said Shrosbree.

Shrosbree’s application of intense color creates an interesting contrast with Fauerso’s primarily black and white works in Let Me Hear Your Body Talk. Do Right Hall, an old adobe church, plays host to large-scale colorful paintings by Shrosbree, which are often paired with groupings of smaller canvases propped against the wall on the floor, leading the viewer’s eye into unexpected places. Series of four or more bright, leafy house plants repeat but evolve.

Shrosbree said she thinks about the colors in her paintings as simultaneously drawing in and pushing away the viewer.

“I want it to have a punch and create an intense space and also remain like a shield,” said Shrosbree. “Like it’s guarding the inside of the painting.”

Blocky, female figures akin to dress up dolls are surrounded by cats and closet remnants in Shrosbree’s paintings. Her incorporation of articles of clothing and choice of color are often generated by memories of her grandmother’s closet and feelings of nostalgia, she said.

“There’s a real connection for me with the women in my life growing up,” said Shrosbree. “There’s something that I really draw from clothing items, things that were in their homes or a pair of shoes that were shared between me and three of my friends.”

The show features Fauerso’s first color painting in over six years, and all new works by her. She practices what she refers to as “subtractive painting,” creating images by scraping paint off with various tools like clay, squeegees and rubber spatulas. Her primarily black and white paintings are rich with textures, one of which becomes superimposed from the pattern of her studio floor where she works. 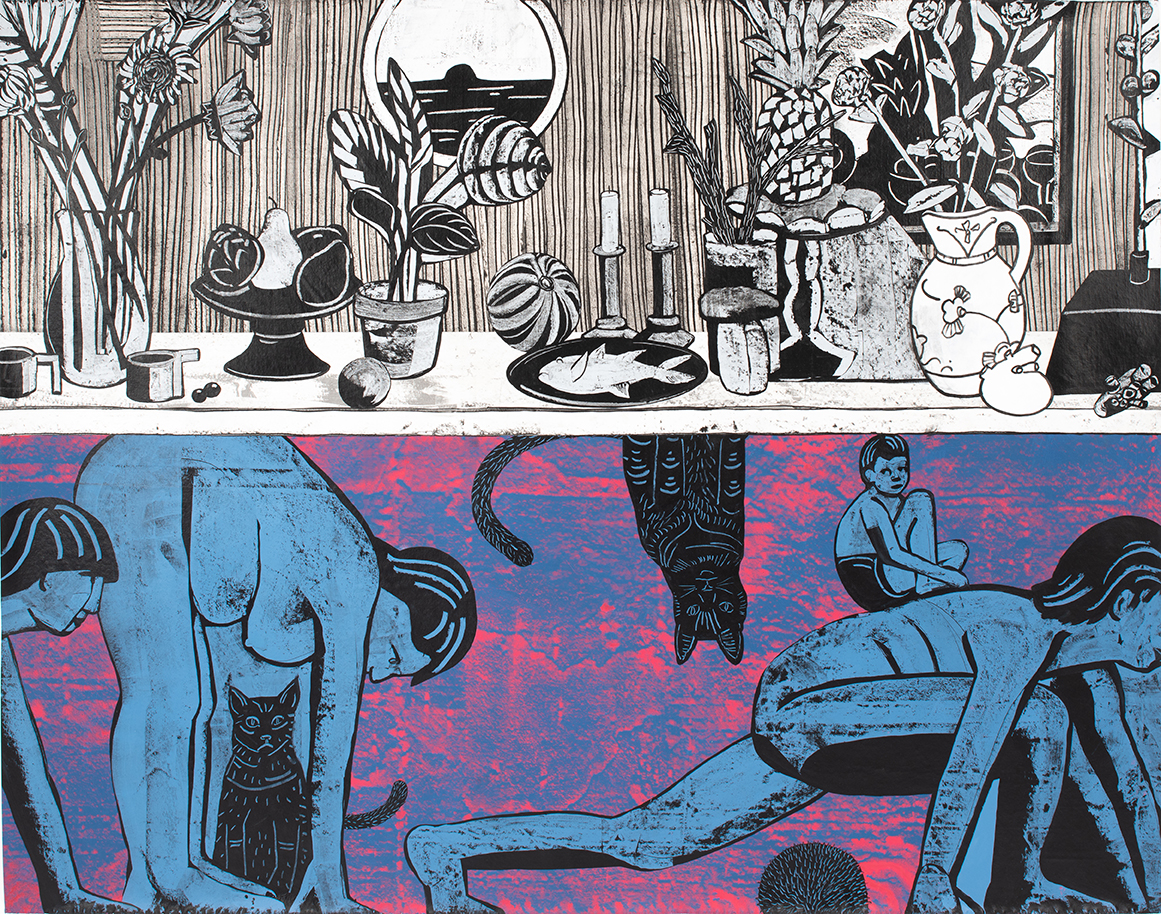 Fauerso, like Shrosbree, often draws from traditional forms and updates them based on her contemporary experience. She said she likes to explore the idea of extending the language of painting into 3D mediums and spaces, allowing 2D paintings to become sculptural.

The concept is evident in the exhibition, where Fauerso’s work takes on various forms, from paintings hung on the wall to wood cuts of body parts leaping off the canvas and onto the floor, to steel-frame geometric shapes and images of crawling women and dogs installed on the building’s cathedral windows.

“It made sense as we were laying out the exhibition, it activated the painting or pointed to the fact that maybe elements within the painting had escaped the painting and manifested on their own,” said Fauerso.

Fauerso seeks to not only disrupt the histories of painting in form but also in content. While nudes in Western art traditionally depict men in active poses, like in battle, and women in repose, objects to be beheld, Fauerso shifts gender roles by activating her female nudes and deactivating male nudes. She also often incorporates female figures crawling, as if trying to escape something, or crouched, as if being weighed down.

“I think one of the interests that I really have is taking traditional genres of painting that have been explored and kind of repeated in Western art for hundreds and hundreds of years and thinking about how to adjust them to meet my experience at this time,” said Fauerso.