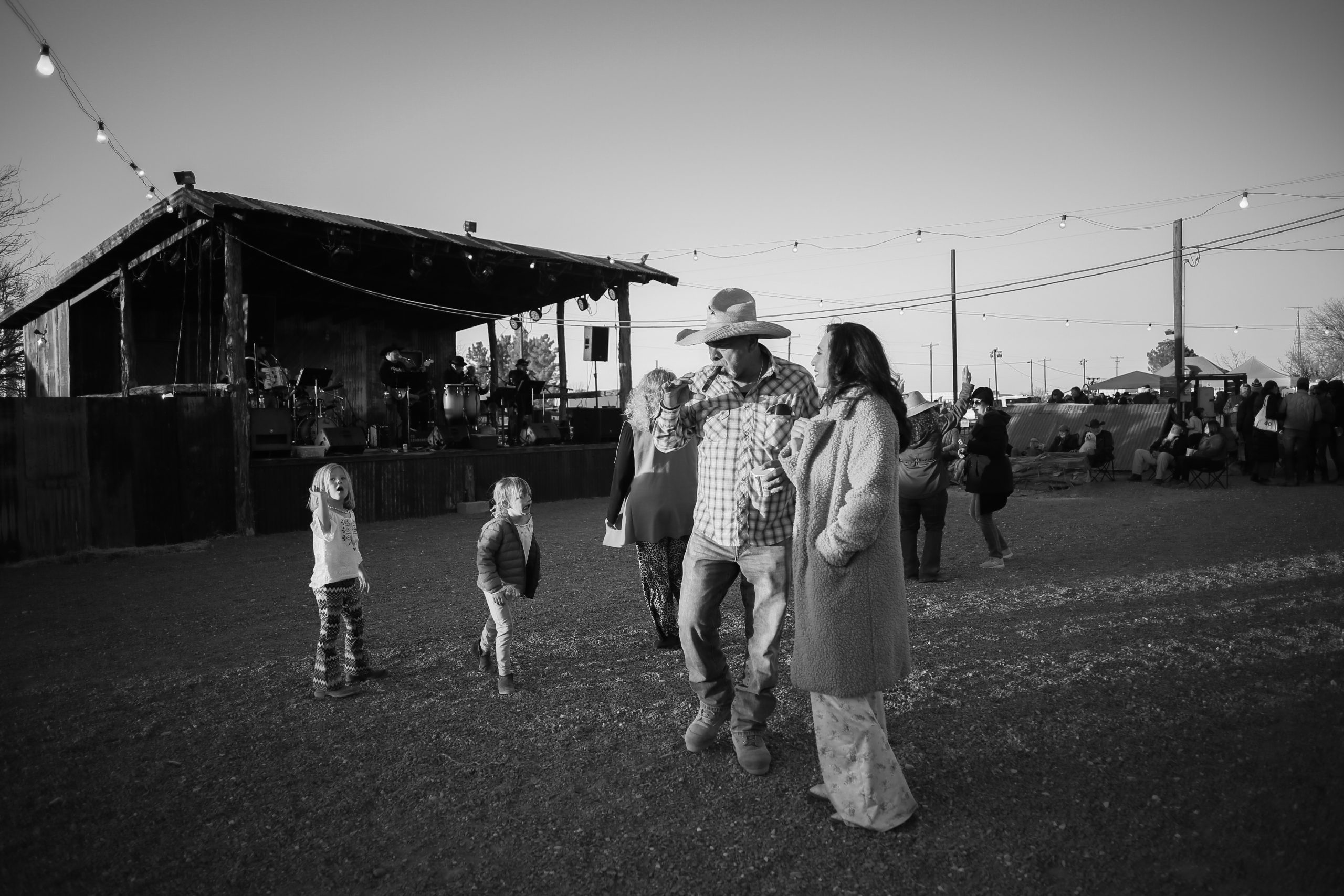 Marfa resident Belle Pena dances with a partner during Los Pecadores’ set at the Valentine’s in Valentine event last Saturday. Photo by Hannah Gentiles for The Big Bend Sentinel.
Subscribe

VALENTINE — Locals to the remote town of Valentine, Texas, and visitors alike gathered Saturday for a day of fun and dance at the Old Mercantile building for the 10th annual Valentine’s in Valentine event.

Despite the frigid temperatures, revelers enjoyed drinks and eats and dancing to live music. One Valentine local said she looks forward to the event as a time when people from all walks of life come together to have a good time.

“I had so much fun — it was really, really nice to see so many different people out and about,” said Laurel Coniglio, who has lived in Valentine for three years. “That’s really the thing that I love about Valentine’s in Valentine. Everybody from all walks of life shows up and just want to be there — whether they’re local or not, whether they’re tourists coming to the show or real deep locals and ranchers, people show up and I loved that.”

The event shines a spotlight on Valentine, which otherwise is generally known for its designer-labeled tourist attraction, said Coniglio. “It’s the one time a year people go there, instead of just going to Prada,” said Coniglio.

Coniglio noted that the annual event wasn’t able to take place last year due to a confluence of disasters — the COVID-19 pandemic collided with the February winter storm that left parts of the county without power for days — so the event this year was a welcome return to form.

Marfa local Pat Keesey, who owns land in Valentine, provided entertainment at the event with his band Grand Tourists, and said the event felt something like a return to normal after a strange, trying year.

“It was really nice,” he said. “I find it very refreshing. It’s like everything is sort of speeding up and picking up in Marfa, and it just feels kind of like old times — people come off the ranches. So many cowboys and ranchers you don’t usually see show up.”

Grand Tourists were one of several musical guests. Junior Brown, Los Pecadores, and Chad Richard also performed. The audience present in the earlier portion of the event were “mellow” but nevertheless gave Grand Tourists a warm welcome, said Keesey.

“They were very receptive,” he said of the crowd. “We were the first band and it was nicer and warmer than expected….It was pretty mellow. We only had a few people dancing.”