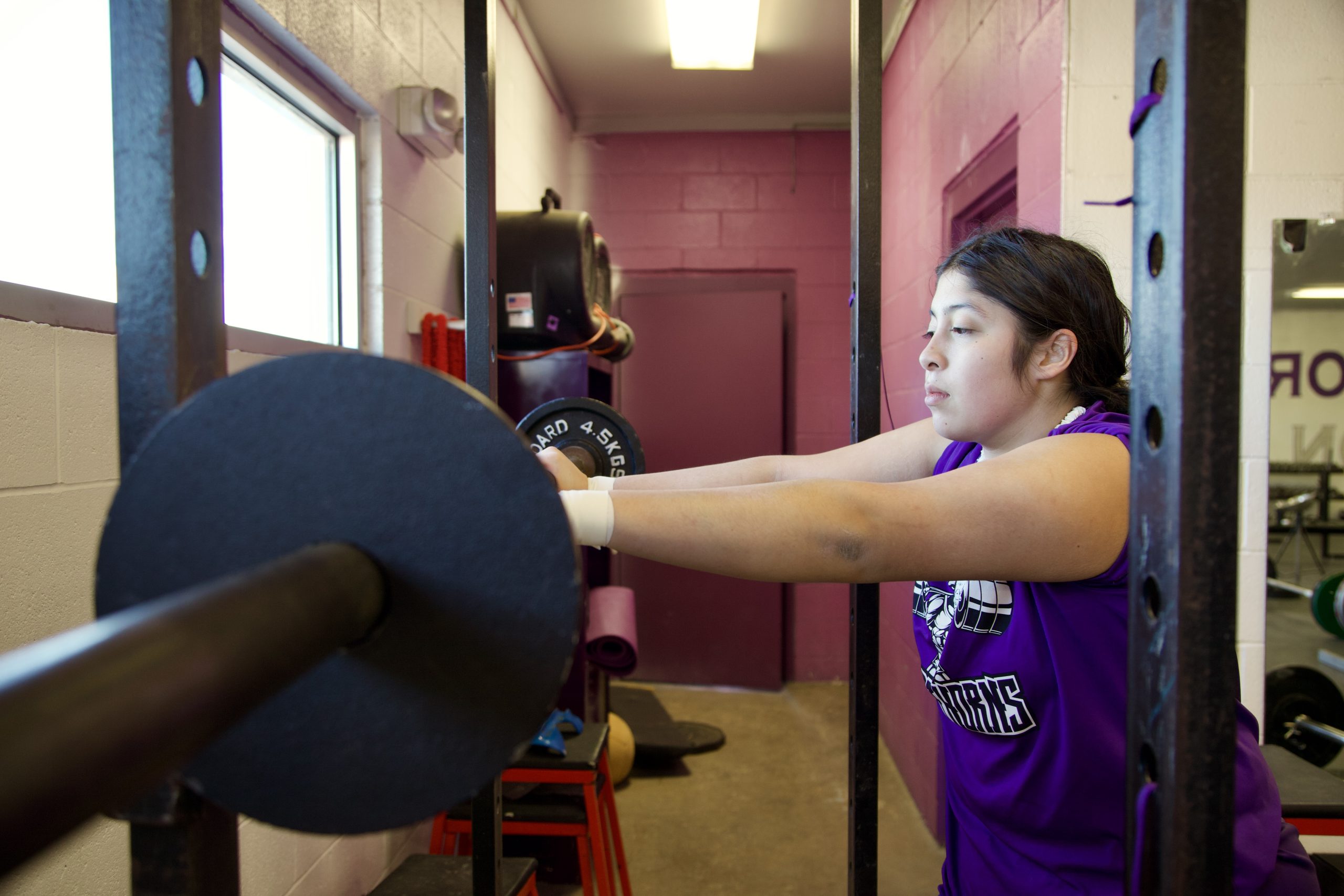 MARFA — A newly-reestablished powerlifting program is bolstering the confidence of some Marfa High School students who are training and competing in the sport for the first time after the program, which dissolved in 2008, was reintroduced this December.

“The way some of these kids came in at the beginning of the season, [compared] to how they look now and how committed they are — some of these kids, I didn’t foresee that in them,” said Athletic Director Linda Ojeda during an update to the school board in late January.

The powerlifting program has successfully garnered student interest, and focusing on building muscle seems to be resulting in healthier mental outlooks and self image for the participating athletes, she said.

“Powerlifting really creates a positive impact on kids, because they see themselves in a different way that they’ve never seen themselves,” said Ojeda. 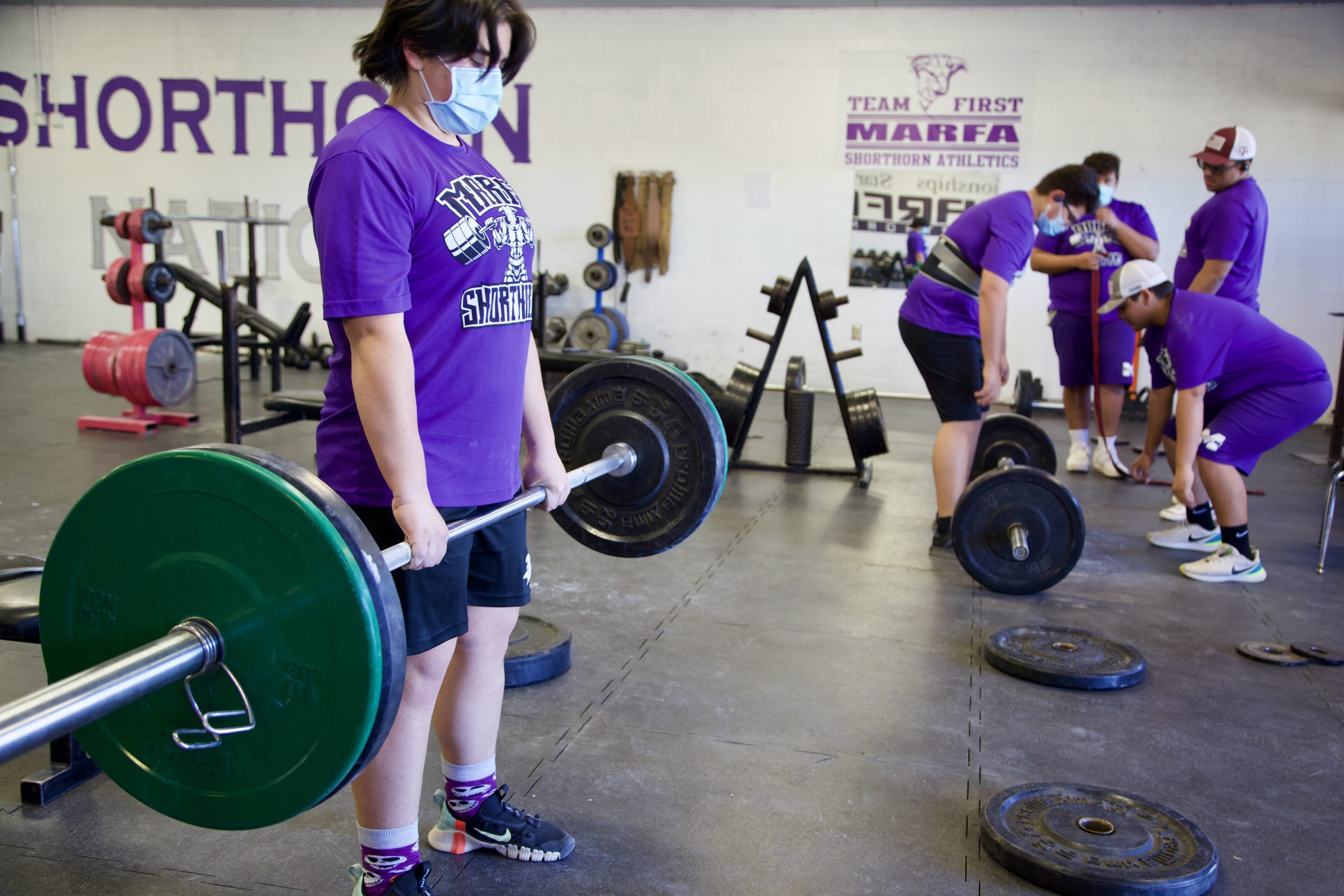 Marfa’s mighty seven member powerlifting team is composed of three girls and four boys who have been competing in meets with other area high schools since this winter. While the co-ed team practices together, at meets athletes compete in the separate girls and boys divisions.

For their inaugural year, the program will not see any of the girls advance to regionals, but the boys have one more shot to qualify Thursday, February 24, at a powerlifting meet in Pecos. The top 12 competitors in their division will advance. With junior Nathan Peña currently ranked 8th, hopes are high he will advance to compete in regionals.

The sport of powerlifting consists of three main events or lifts — squats, deadlifts and bench press. Rankings are cumulative of all three events. At their trial meet in Monahans earlier in the season, Peña was lifting a total of 1,000 pounds for all three of the events and is now up to 1,065 pounds, he said. Like many students at Marfa High School, Peña participates in multiple sports programs, but he said it helps him keep busy.

“There’s nothing to do in the town. So yeah, we need something to do,” Peña laughs.

Peña said he anticipates powerlifting helping him excel further in football and track. He said he’s been enjoying his time in the weight room and, despite the physical challenge, it’s fun to learn new skills.

“It’s new and something that we haven’t had here,” Peña said.

He said the opportunity to travel and connect with other young powerlifters are some of his favorite aspects of the sport, but getting up at 3 a.m. in order to get on the bus to Fort Stockton by 4 a.m. was one of his least favorite. 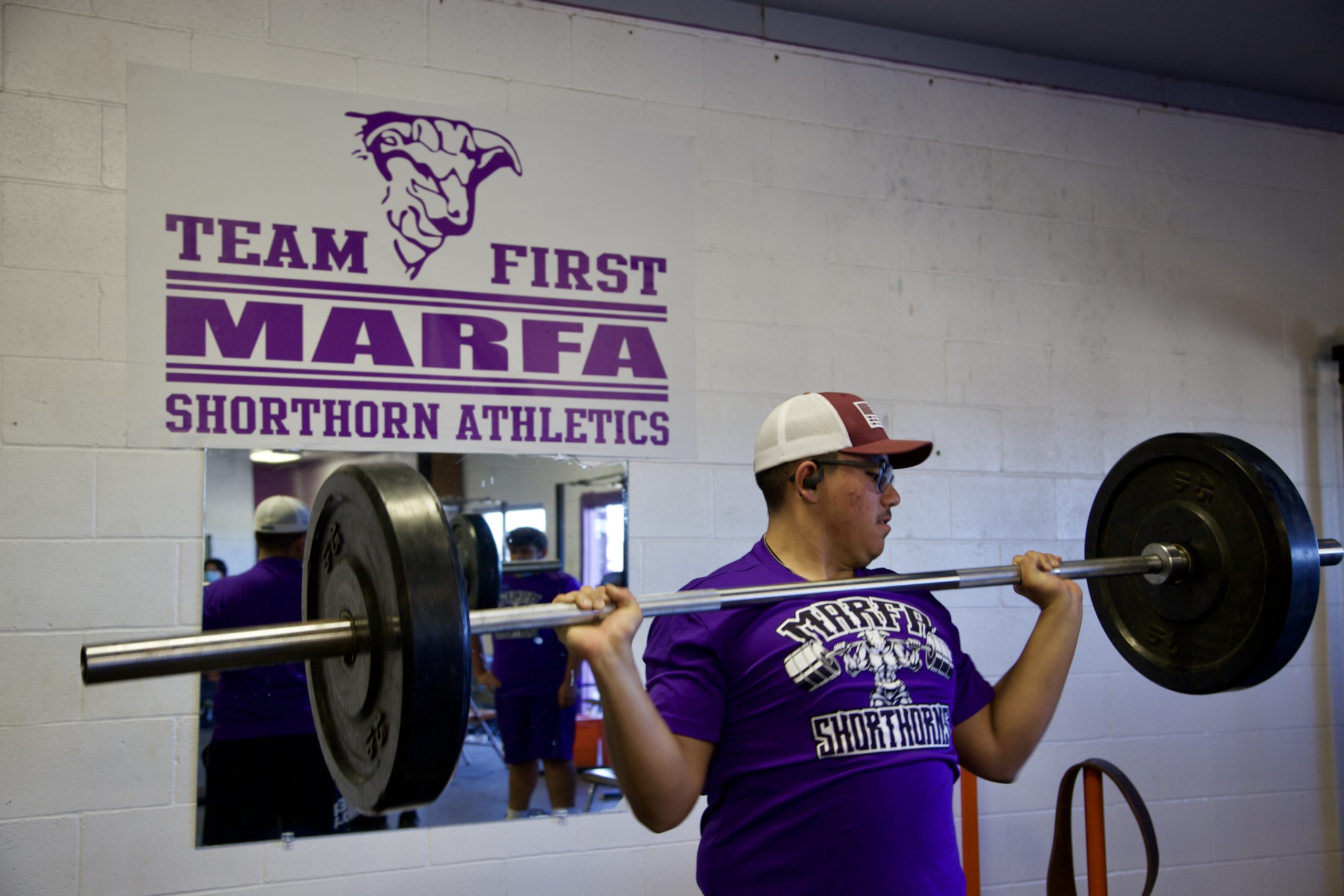 Coach Josh Kelly initiated the powerlifting program this fall in order to give kids another option to participate in school sports and to help build strength for their other sports activities. He said he is looking forward to having a full practice season this coming school year, something they did not have this year because they started training in December. The later start has also resulted in some shortages of equipment, he said.

Startup costs for the program could be high — certain equipment, like powerlifting suits, cost around $200 a piece. Kelly said he has ordered new powerlifting suits, bench shirts, belts, wrist and knee wraps and they should arrive in time for next season. In the interim, the team is sharing belts provided by parents and loaning equipment from other schools in the area, said Kelly.

Williton Grear, graduate student in the Kinesiology and Human Performance Department at Sul Ross State University, participated in powerlifting, track and football growing up in Austin. He said one of the major challenges for smaller schools in this sport, in addition to equipment costs, can be providing adequate coaching staff. He said it is ideal to have three to four coaches in the room during workouts.

“Powerlifting is a sport where the coach has to really take the time to explain and make sure that the athlete is doing it right. So, with one coach it’s going to be hard to expand their intention to everyone,” said Grear.

Grear said in general the sport of powerlifting helps young athletes learn proper weightlifting techniques and gives them more autonomy to navigate workouts in the weight room in the future. Gradual strength training also teaches students how to set and achieve goals, which is good practice for the real world, he said.

Billy Ray Laxton, associate athletic director for sports medicine at Sul Ross State University, also competed in powerlifting in high school and said while the sport has been around for a long time it is just now reaching smaller schools. It can be a particularly uplifting sport, he said, because of the way it encourages athletes to support one another — if someone is going for a personal record at a powerlifting meet, the whole gym, not just their teammates, cheers them on.

Unlike a team sport with many players and scenarios, the gains made in weightlifting are personal and evident, said Laxton, which can appeal to kids who haven’t taken to any other sports.

“In powerlifting you know for a fact if you’re lifting 10 pounds more than you did before. It’s very data-driven. And you can see right away, ‘Hey, I made a significant improvement this week,’” said Laxton.

Ashley Marquez, a Marfa High School ninth grader on the team, said she’s found her groove with powerlifting after experiencing a lack of interest in other athletics and feeling down during the pandemic. Powerlifting has helped her feel emotionally prepared for other activities, like softball and trying out for the school mascot, she said. 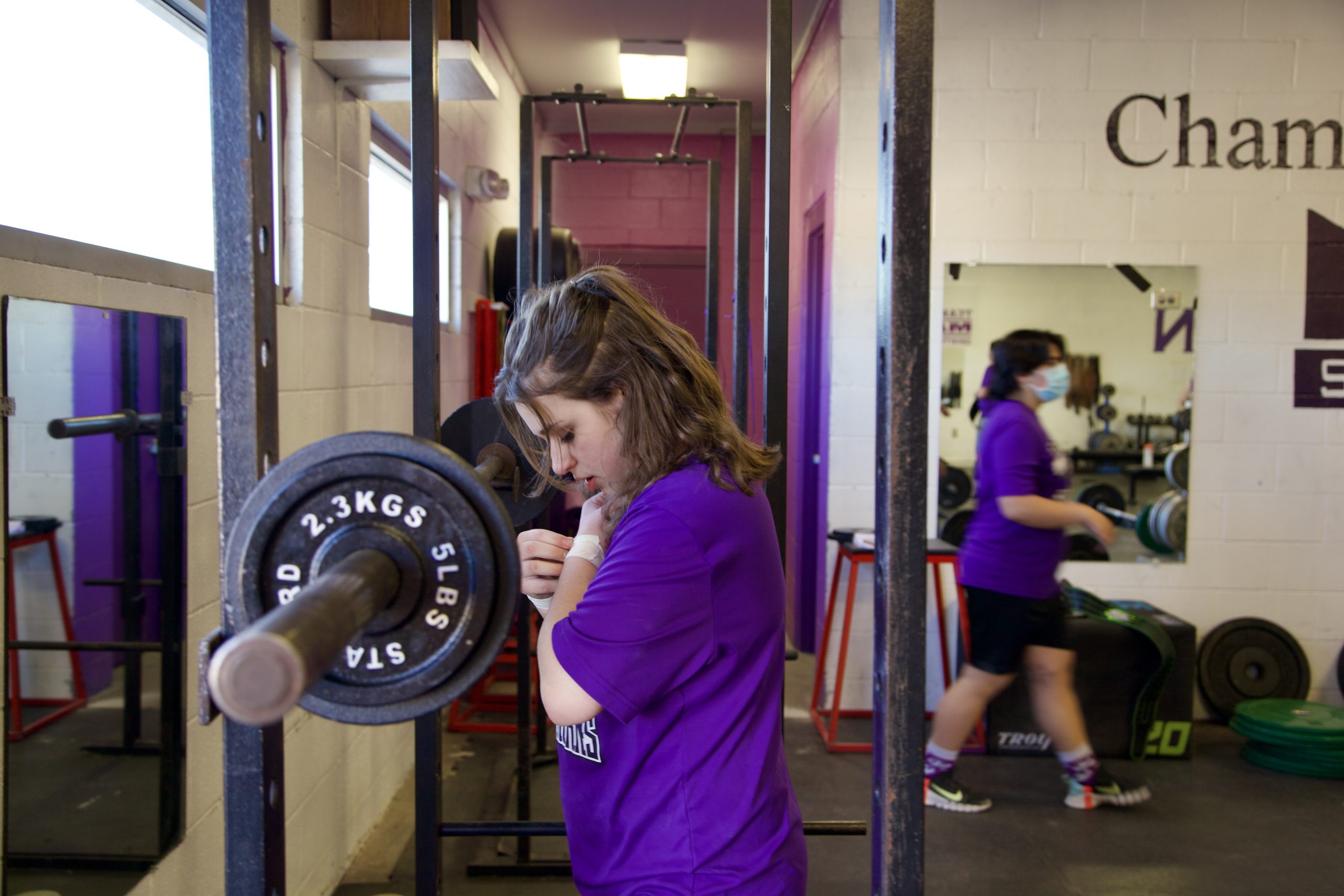 She said she has relished meeting fellow young female athletes at meets and plans to work out throughout the summer to be better prepared for next season. Her goal is to make it into the “800 Pound Club” by her senior year — right now she’s lifting a cumulative total of 425 pounds in the three events.

“I like that I can level up each time and I can get better in everything I do in the sport,” said Marquez. “It takes a lot of resilience. You have to bounce back constantly.”