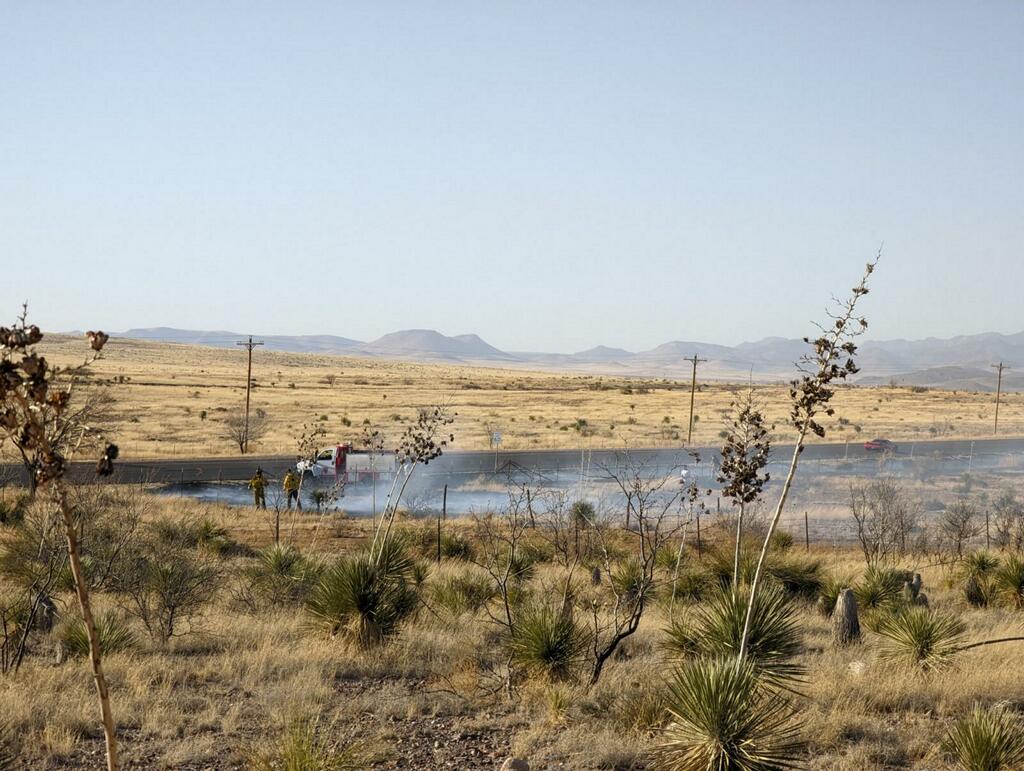 A small wildfire broke out alongside Texas Highway 17-North on Sunday evening around 5:30 p.m., scorching a swath of grass between a half-acre and an acre in length. Photo courtesy of Carolyn Macartney.
Subscribe

MARFA — The Marfa Volunteer Fire Department responded on Sunday to a small wildfire burning just outside the city limits along Texas State Highway 17-North, which left an expanse of grass between a half-acre and acre in size singed black.

The fire was prevented from spreading too far due to bare patches that acted as natural fire breaks, according to Marfa Fire Chief Gary Mitschke, and the remaining flames were quickly brought under control by the volunteer firefighters who responded to a call around 5:30 p.m. Given the low humidity and high winds that permeated the region on Sunday, noted Mitschke, the incident could have been much worse had those bare patches not been present.

“On Sunday we were under extreme wildfire conditions, so we were lucky on this one,” said Mitschke. “It kind of ran out of fuel there — that helped a lot. Otherwise it would have been much bigger than it was.”

Much of West Texas, including the Marfa area, was under a Red Flag Warning — meaning extreme fire weather conditions — beginning Sunday morning and into mid-evening that day. But the abundance of dry grass, which acts as fuel for wildfires, plus low humidity and high winds remain a source of concern, said Mitschke, creating conditions such that the tiniest spark could ignite a bigger problem.

As for Sunday’s fire, Mitschke said he wasn’t sure what had caused it — it very well could have been a cigarette tossed out of someone’s car window, he said, or a vehicle muffler or a chain dragging on the ground.

“It’s a good indicator of where we’re at with the dry fuels in the county,” said Mitschke. “We’re to the point where just about anything’s going to start a fire, so it’s pretty bad.”

Local painter and designer Carolyn Macartney, who lives on the far north side of town, was on a walk Sunday evening when she saw “a whole bunch of smoke” — she walked over the hill to see its source, and saw that the fire department was already on the scene extinguishing the flames.

“It was very alarming,” said Macartney. “I live in that neighborhood and the wind was very, very strong, and if they hadn’t gotten there it would have gone straight up the hill. It would have been devastating.”

The fire serves as a reminder to observe the burn ban currently in effect in Presidio County, which prohibits actions such as smoking without using an ashtray, driving or parking in tall, dead grass, lighting campfires, and welding in grassy areas.

The spring can be an especially hazardous season, said Mitschke, as March and April bring high winds and “dry lightning,” or lightning without accompanying rain to alleviate the dry conditions.

“All indications are that the conditions that we’re in right now are very similar to what we had back in 2011, and that’s when we had the big wildfire outbreaks, not just here in Presidio County but also over the whole state,” said the fire chief. In April of 2011, an outbreak of wildfires scorched swathes of West Texas, including Fort Davis and Marfa.

“Everybody needs to be aware of the extreme conditions we’re under and be very careful,” said Mitschke.