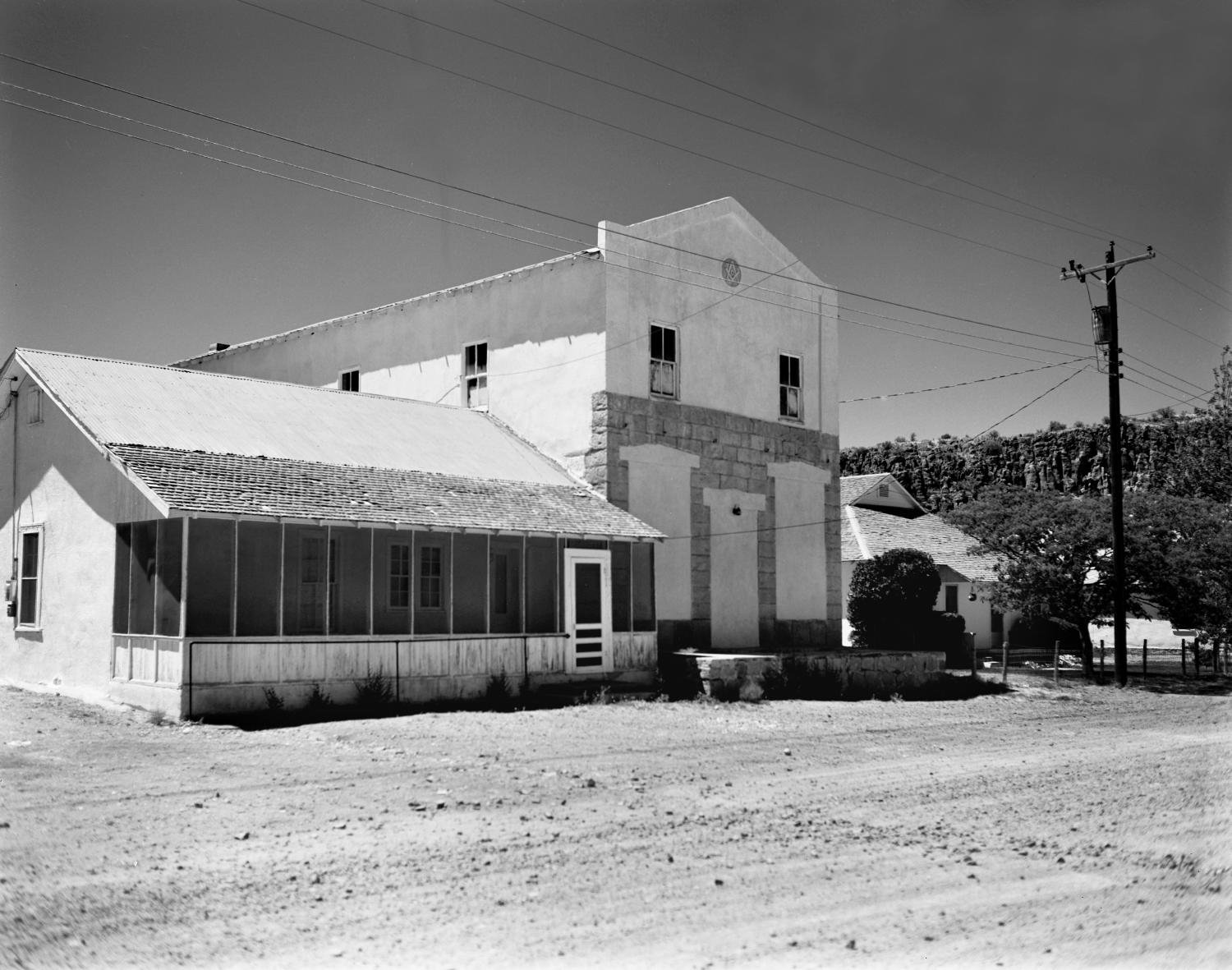 FORT DAVIS — Julie and Bruce Webb, owners of Waxahachie’s Webb Gallery, which exhibits historic and contemporary Texas folk art and antiques, first saw Fort Davis’ abandoned Masonic lodge in 2016 while on a driving tour led by the late historian and writer Lonn Taylor, with whom they were acquainted.

“He said, ‘You guys need this building.’ He had seen our building in Waxahachie, which is historic from 1902, and he knew about our interest in fraternal artwork. And we said, ‘Yes we do,’” said Julie.

The Webbs kept a close eye on the building from that day forward and finally got their chance to become its owners when Jeff Davis County, who used to own the structure, opened it up for sealed bids last year. The Webbs bid as much as they could possibly afford, they said, and made the seller aware of their experience restoring historic buildings and vision for the space.

After some time they learned they were chosen for the sale and recently came into town from Waxahachie — a day’s drive — to sign paperwork at the county courthouse and to start clearing out the space, which has been largely inactive since the 1980s.

“We’re just gonna keep working on the building and let the plan unfold and try to pay attention to what the building tells us more than what we’re going to tell it,” Julie laughs. “It’s older than we are, it’s got a lot more wisdom.”

The history of Masonic and Odd Fellows organizations in Texas can be traced back to the 1830s. Due to an aging constituency and decline in active members, smaller Masonic lodges, like the ones in Fort Davis and Marfa, eventually began to merge with larger branches, like Alpine’s, which is still in existence today. Under the Webbs’ ownership, the historic Fort Davis Masonic lodge will be restored to serve as a gallery space and museum for the couple’s collection of artwork and artifacts of fraternal secret societies.

“The lodge hall upstairs will serve as a fraternal museum and library, and downstairs we will have an extension of Webb Gallery from Waxahachie with artwork, antiques and books,” said Julie. 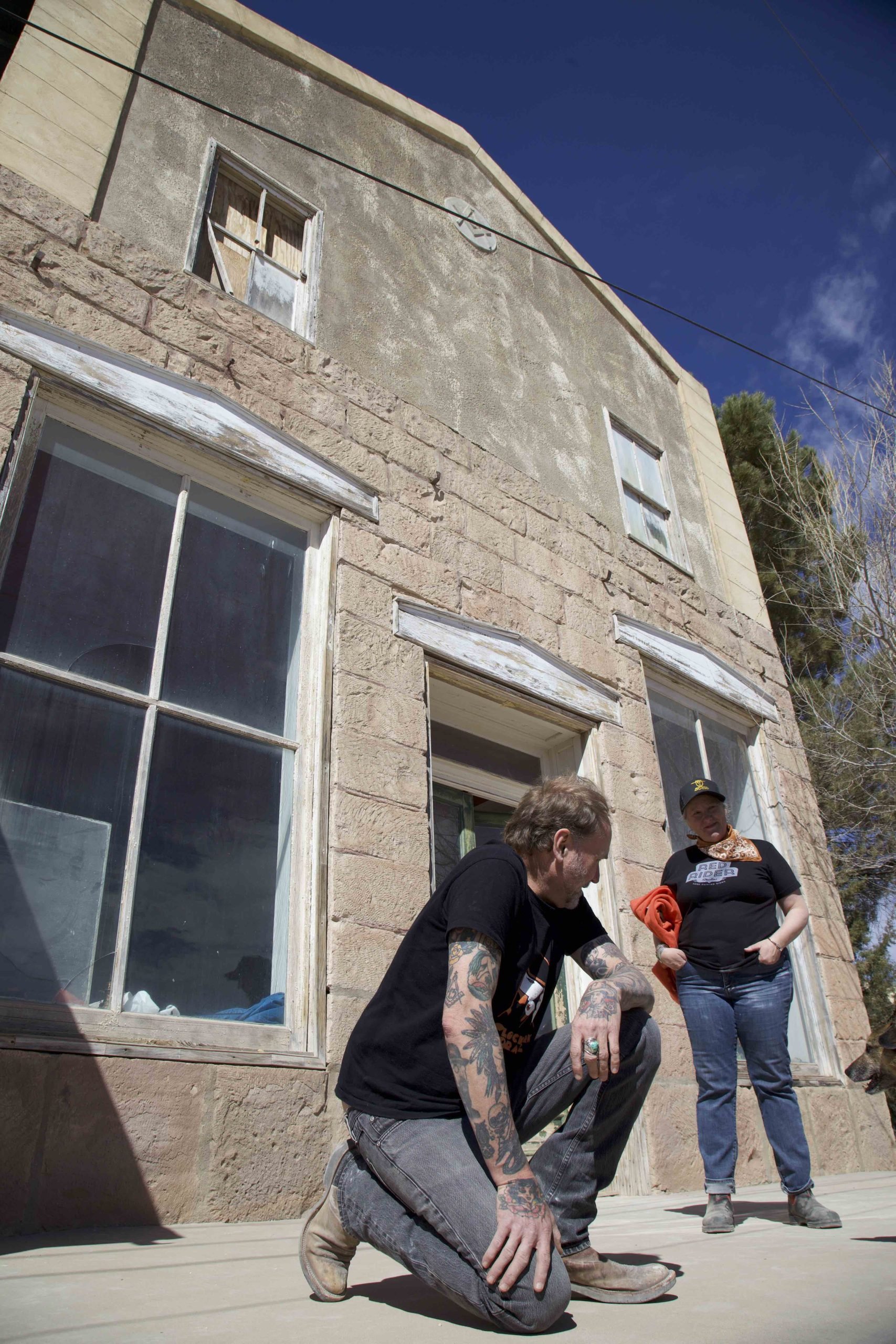 Bruce and Julie Webb in front of their newly-purchased pink limestone building, which once served as Fort Davis’ Masonic lodge. The couple intends to restore the space, originally built in 1906, and transform it into a bookstore, gallery and exhibition hall for their collection of masonic lodge artifacts. Photo by Mary Cantrell.

The couple began the restoration process by removing office cubicles that were installed years earlier. They intend to create big, flowing open spaces that better reflect the building’s history and integrity, said Julie. They are also going to restore all the windows and work from historic photographs when possible.

“We like the structure to tell the story, and a lot of times in historic preservation it’s [about] what not to do,” said Julie.

The two-story pink limestone landmark was constructed in 1906 and is situated in downtown Fort Davis along the historic San Antonio–El Paso Road, or Overland Trail, a trade route between San Antonio and El Paso utilized from the mid- to late 1800s.

The structure, after initially serving as a drug store, acted as Jeff Davis Masonic Lodge No. 896 from the 1920s to the mid-1970s. The second story was added on to the structure in 1928 in order to serve as the masons’ lodge hall and meeting space. It is one of few two-story structures in town. Triangular lintels top the building’s entrance and large front-facing windows. A still visible Freemason symbol — a builder’s square joined by a compass — near the structure’s peak reveals its past.

Immediately next to the old lodge is the “Scobee Adobe,” an 1884-built adobe home where newspaper man and pulp fiction writer Barry Scobee, for whom Scobee Mountain is named, lived. “The bard of the Big Bend” wrote a number of books on the area in addition to contributing to Weird Tales and other pulp magazines. Bruce said they have been successful in purchasing Scobee material on eBay.

Their Instagram announcement about the acquisition received over 1,000 likes and 89 comments from Webb Gallery followers and well-known Texas artists showing support and excitement for the forthcoming project. Similar to their Waxahachie location, which has been operating for 34 years, the Fort Davis gallery will host four rotating exhibitions a year and likely invite in visiting artists. Julie said while plans will continue to unfold, they are looking forward to the opportunity to create a new spin on what they do.

“There are people, who we love their artwork and we don’t necessarily show in Waxahachie, that might fit this landscape better. So it’s definitely an extension of what we do, but it will be reflected by the landscape here as well,” said Julie. 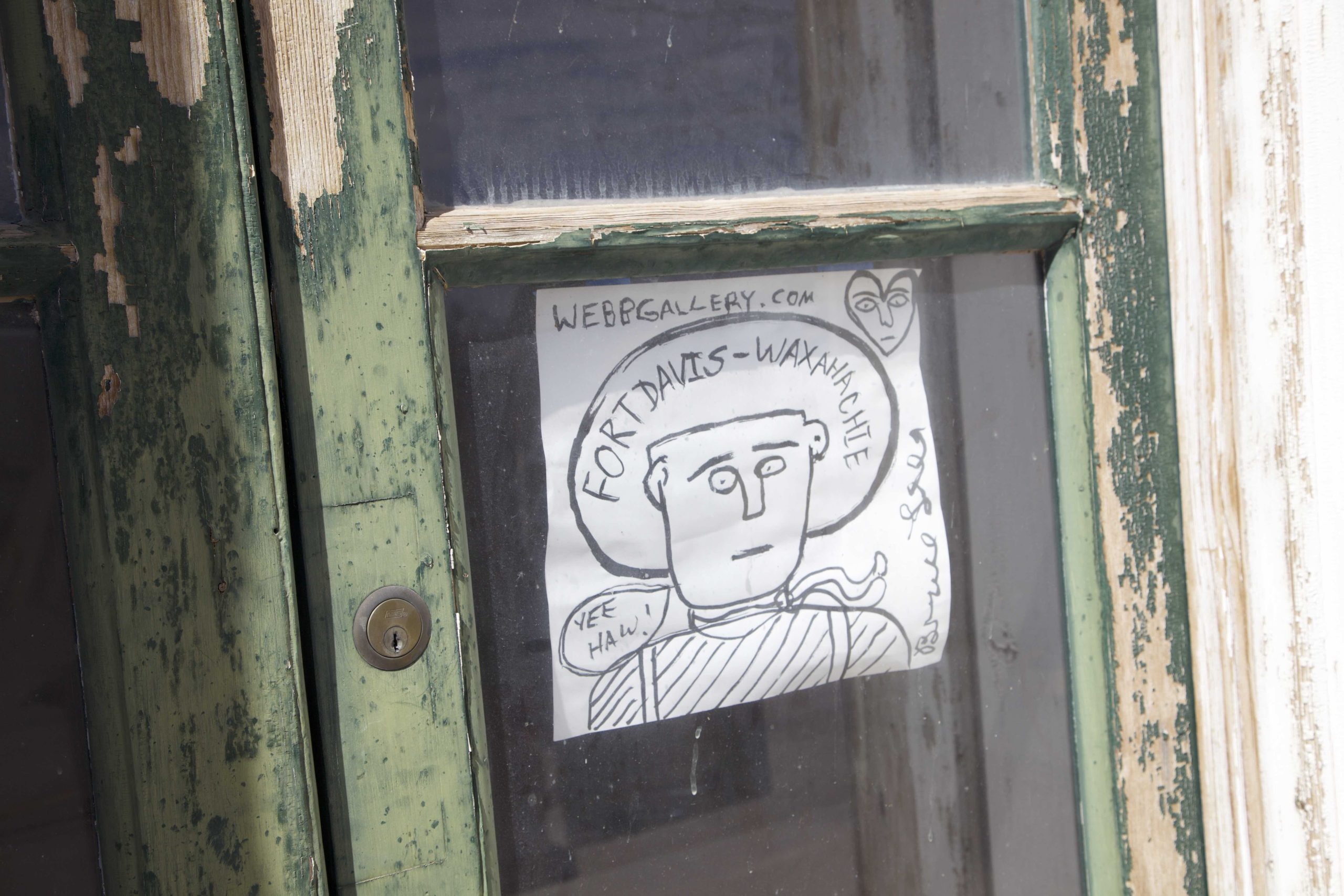 Bruce and Julie Webb of Waxahatchie’s Webb Gallery recently purchased a historic building in downtown Fort Davis which they hope will serve as a community gathering space for art exhibitions, books and more. Photo by Mary Cantrell.

The duo’s collection of Masonic and Odd Fellows folk art and artifacts consists of items from all over the country purchased from defunct lodges. In addition to traveling to antique fairs around the U.S., the Webbs ran ads in Antique Trader for “old lodge items.” Bruce, who is also an artist, recalled one of their first acquisitions: an assortment of old costumes, robes, hats and tunics fit with the emblem of the all seeing eye. He said they were attracted to the “old ritualistic feel” of the items. Bruce is also the co-author of As Above So Below, Art of the American Fraternal Society, 1850-1930, which came out shortly before the couple was introduced to the Fort Davis lodge.

The Webbs were mostly unaware of any others building similar collections, but a current exhibition on view at Austin’s Bob Bullock Museum proves they aren’t the only ones with an interest in the folk art of secret fraternal societies.

In addition to having existing connections to West Texas and an appreciation for its landscape, history and architecture, Bruce has been a member of the Freemasons since he joined the Waxahachie lodge at age 21. Bruce has even met with a previous Fort Davis lodge member, he said.

The Webbs were motivated, in part, to purchase the old Fort Davis Masonic lodge after reassessing their priorities in life in the wake of the pandemic and some recent familial losses, said Julie.

The two will continue to run their Waxahachie space but will make regular trips to West Texas and update their website accordingly, they said. The Webbs hope to help preserve the spirit of timelessness in Fort Davis and foresee their improvements to the building turning it into a welcoming space again.

“I think that we will be bringing [the town] a new exciting slice of humanity and art,” said Julie.

As fraternal lodges once acted as shared community spaces, the Webbs hope to reestablish the building as a gathering space for locals and visitors, they said. In recent days, curious citizens have been stopping by to meet Julie and Bruce, sharing advice and expressing interest in their plans for the historic structure.

“We started out in a small town. And we know what that means to be different in a small town community. We’re not entering into that one blindly,” said Julie. “We’ve always just done our own thing and love what we do and love sharing it with the community.”