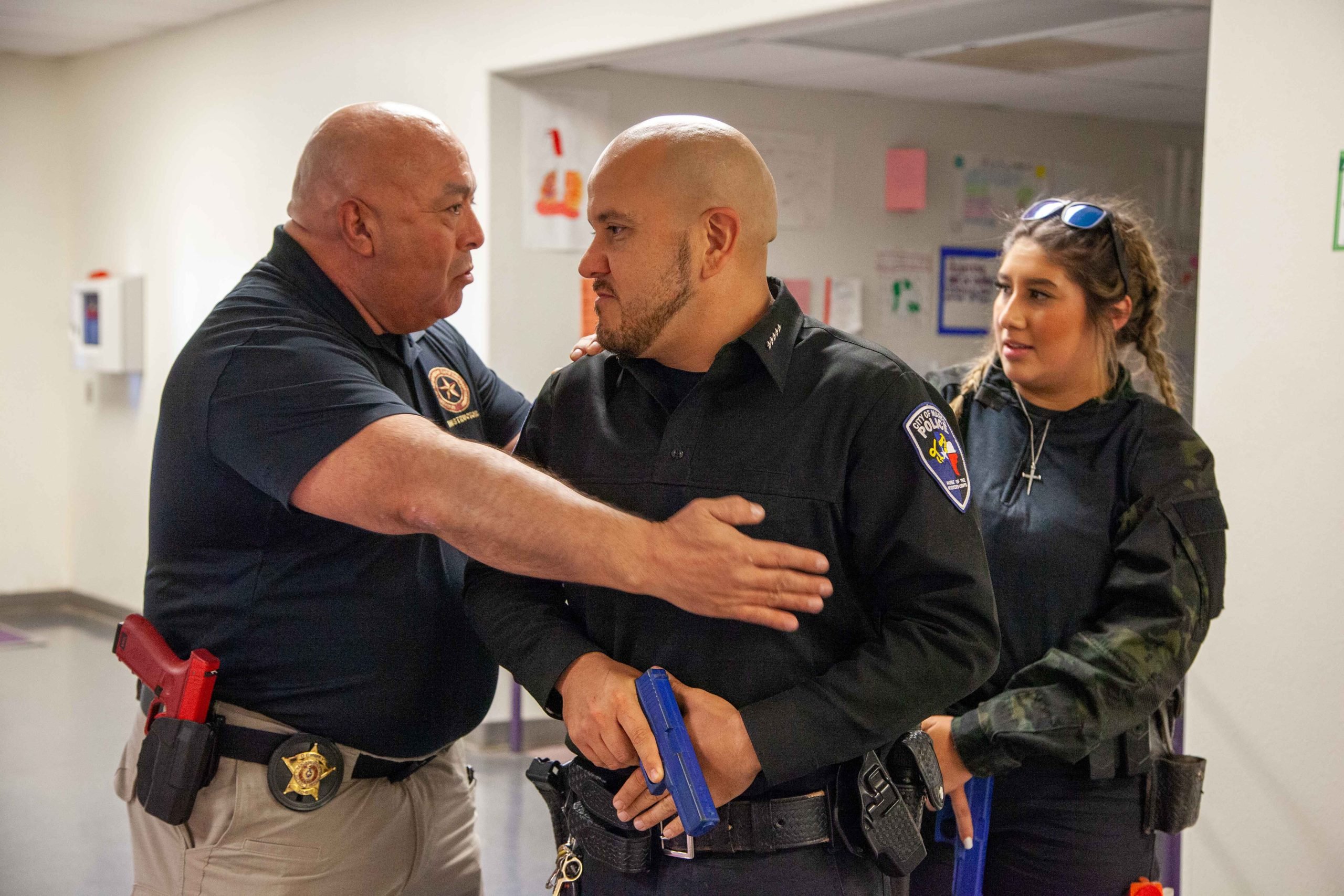 MARFA — The halls of Marfa High School, typically filled with students, are being occupied by law enforcement officers from Marfa, Alpine and Fort Stockton police departments, Pecos and Presidio county sheriff’s offices, Border Patrol and Department of Public Safety troopers this week who are participating in an active shooter training course while students are on spring break.

“I think it’s important that everybody, especially with all the different agencies that are around the area, that they all have the same mindset when it comes to an active shooter occurring here,” said Marfa Police Chief Estevan Marquez. “It’s something we hope we never have to use, but in case it happens, we do have an understanding of how it works.” Marquez said that to his knowledge, the multi-agency training is the first of its kind to take place in Marfa.

On Tuesday, the assortment of officers practiced several drills and scenarios: entering classrooms from various angles with different numbers of officers, silently signaling to their partners, shouting commands to a potential active shooter, instructing students, and quickly assessing and announcing medical situations to other first responders.

The entity conducting the active attack response training is the ALERRT (Advanced Law Enforcement Emergency Rapid Response Training) Center, part of Texas State University in San Marcos. Ian Kapets, adjunct instructor for ALERRT, said the center conducts an average of 30 to 50 classes a week around the country at no cost to the hosts. The program receives a combination of state and federal funding and, according to its website, is operating on a $22.7 million training budget for the current funding cycle.

Kapets said it is ideal for officers to train for an active attack in familiar environments and practice realistic scenarios. For areas like Far West Texas, an emergency event would likely involve the cooperation of a small ad hoc team as opposed to a singular agency, he said. 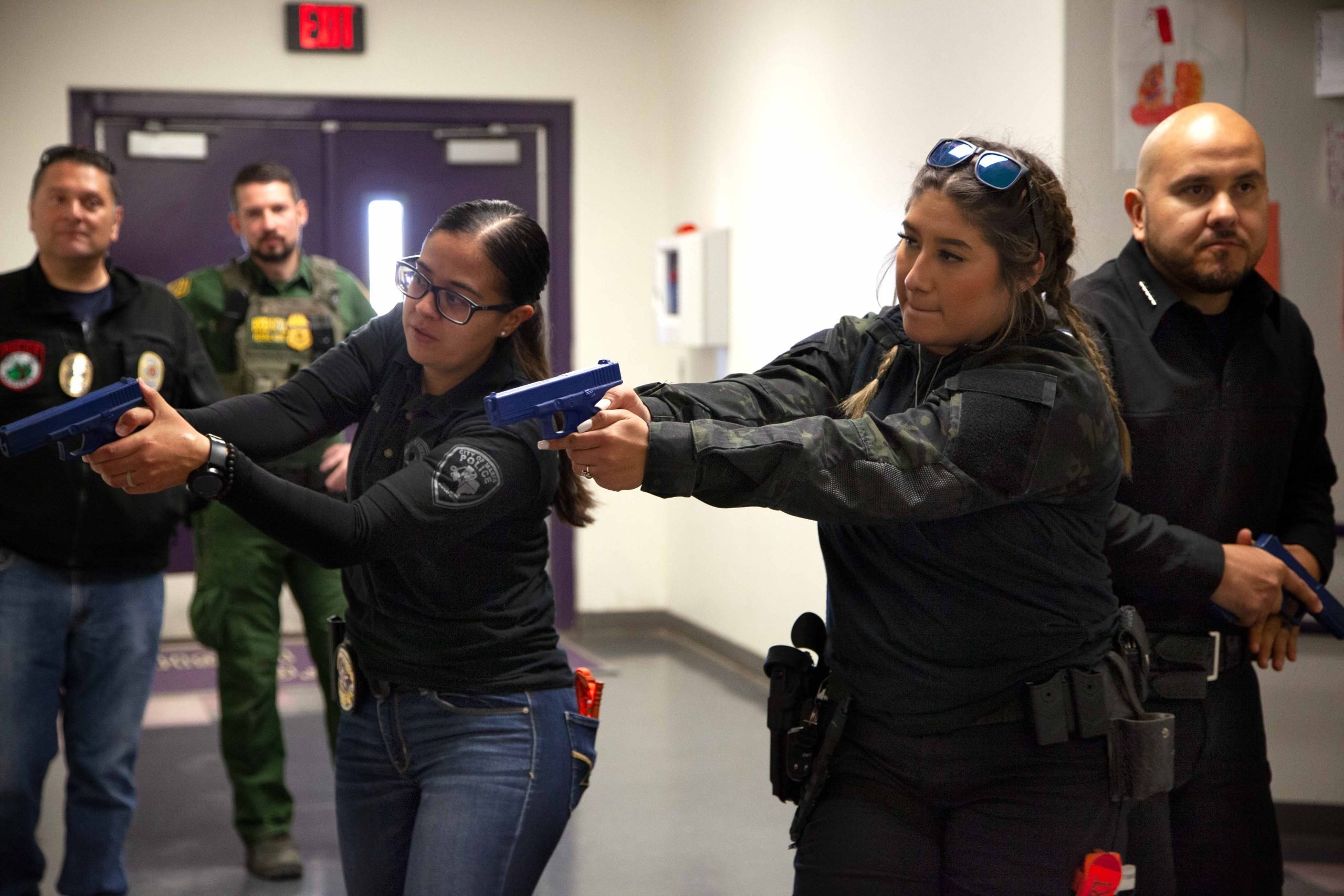 “A lot of times in small communities, specifically Marfa, Alpine and Marathon, you’re getting sheriff’s deputies, DPS troopers, game wardens and a police officer or some sort of combination. You don’t have large departments with 30 to 40 guys working at a time. So it’s really providing training across the community,” said Kapets.

Kapets said this week the group of law enforcement officers will focus on de-escalating situations and, more importantly, learn how to render medical aid, providing tourniquets and managing individuals before EMS can arrive on scene.

“That’s something we’ve seen through data, cops are really good at managing incidents and the terrible nature of what they are, but one thing [data has] shown over the last few years is we have an area for improvement: let’s work on providing medical care,” said Kapets.

Later in the week, the Marfa Volunteer Fire Department, Chief Gary Mitschke and his team, along with Marfa EMS Director Bert Lagarde and his team, will also collaborate on the active shooter training.

Marquez said in addition to new officers gaining familiarity with other first responders in the area, the active shooter training also gives them the opportunity to learn the school’s layout. Federal and state funding is likely available for Marfa Police Department to obtain mass casualty or emergency go bags for their patrol cars, which Marquez said he intends to include in his budget wishlist for the next city budget cycle.

Marquez said the police department extended an invite to Marfa ISD teachers in order for them to be aware of how officers might be communicating and entering rooms during an active shooter event. According to High School Principal Alison Scott, none of the teachers were planning to attend the training. It was scheduled in concurrence with spring break vacation.

Kapets encouraged interested parties to visit ALERRT’s website to access free civilian response training. Marquez said he and other Marfa officers are trained in instructing civilian active shooter courses, and while they used to present every year at the start of the school year, have been thrown off since the COVID-19 pandemic.

Marfa ISD employees, including counselor Luane Porter and High School Principal Allison Scott, who will retire at the end of this school year, have been working on updating the school’s security plan, which was discussed in a school board meeting earlier this fall. They have not since presented to the board on the matter, but at the latest school board meeting security was top of mind as the governing body discussed what preventive measures they could implement that would act as the first line of defense, whether it be upgrading to electronic locks or installing a fence.

School security has been of grave concern for administrators and parents after an incident involving a shelter in place order in 2019 revealed holes in the district’s lockdown procedures.

“School shootings are a big thing that happens nowadays. It’s important to continuously train for. Every situation is going to be different. You never know what’s gonna happen. I believe we need to continue these trainings,” said Alferez.