‘The ropes and the reins and the joy and the pain’: rodeo returns to Redford 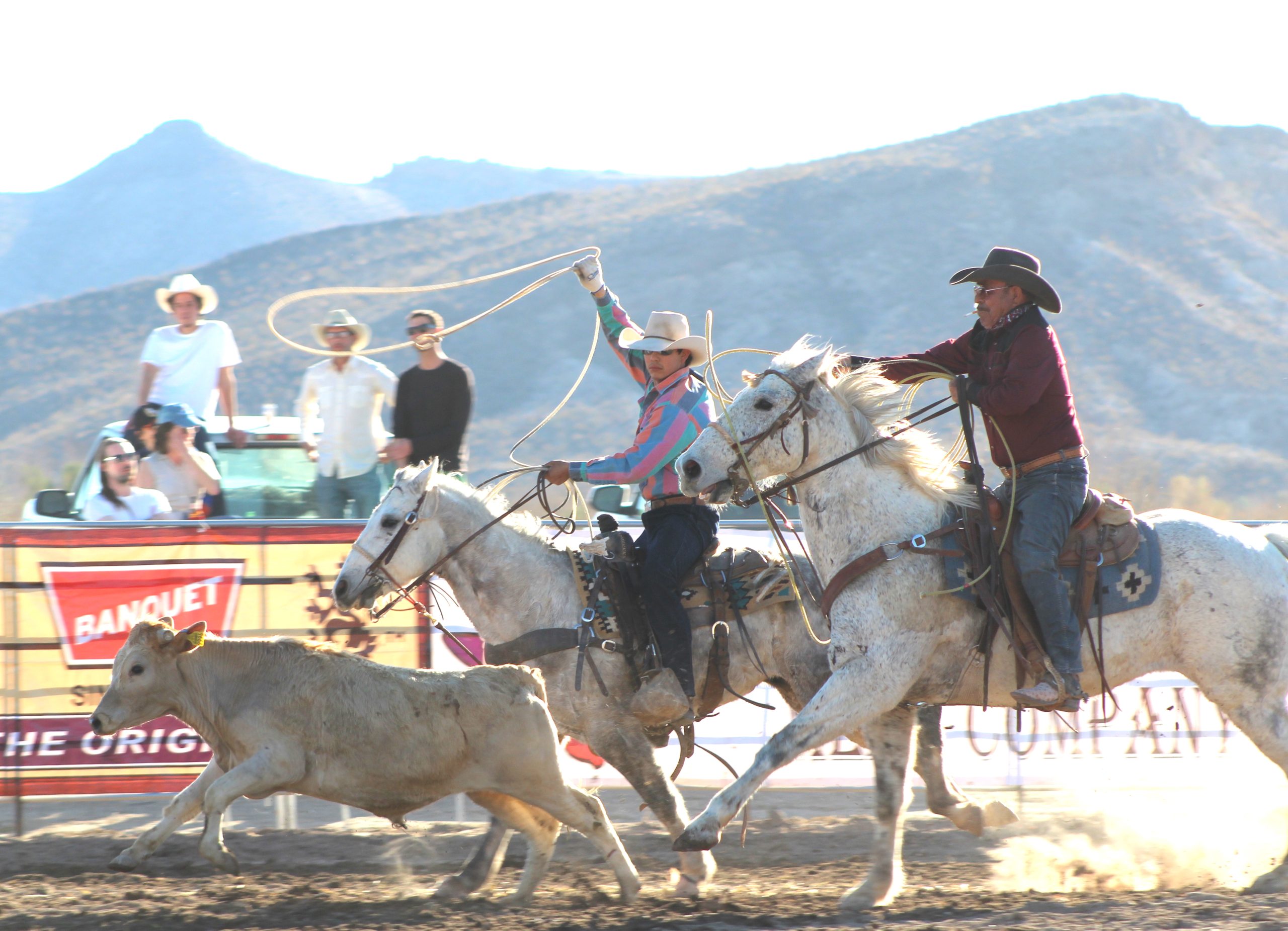 REDFORD — Dust rose over the DVM Arena this weekend for the first time since last summer, marking the return of a new Redford tradition: rodeo. Cowboys from across Texas converged on the tiny River Road community to show off their skills in the hopes of taking home cash prizes.

Census data used for county redistricting suggests that Redford, about 15 miles down the road from Presidio, has a population of 32. Population figures are notoriously unreliable in the Big Bend, but after a few decades of border closures, militarization and the Permian Basin oil boom, not that many folks have stuck around. Still, the Presidio school bus faithfully makes its way downstream twice a day for a handful of kids, and the community is inventing new ways to celebrate Redford pride.

David Marquez, who’s lived in Redford for most of his life, started organizing the rodeo last summer. It was initially conceived as a team roping competition between friends across the Big Bend and has started to grow — this weekend’s competition hosted 20 cowboys. “I’ve been around horses since I was a kid,” he said. He trains them for a living now, and as a young man competed in rodeos as far away as Junction, Texas.

The rodeo is a family affair. The arena is named for Marquez’s children: David, Valeria and Marina. Marquez not only competed in the weekend’s team roping, but also served as the announcer and master of ceremonies, and took time between events to spray down the arena with water from a fuel truck he bought in Presidio and specially converted for the job. His wife and kids manned the cattle chute, helping load a line of cows waiting for their turn in the ring and lifting the gate with each wave of the official pink flag. “The hardest part is rounding up the cows and keeping the arena wet,” he explained. “It’d be nice to have someone else on the microphone, announcing and choosing songs.”

Marquez said that the best part of the day was watching the younger kids compete in the ring in between grownup events like barrel racing and trailer loading. A fan favorite was ‘Calf Panties,’ an event Marquez invented that involves putting women’s undergarments on young cattle. The kids were also eligible to compete in events like a boot scramble that brought merriment — and lots of mud — to the crowd. “It’s always nice to see the kids have fun,” he said.

While rodeo guests were encouraged to BYOB, Presidio’s Butch Acosta and Laura Viramontes provided the crowd with elevated cowboy grub. Acosta and Viramontes serve barbecue from a trailer Saturday mornings at the Presidio Farmer’s Market, but took the weekend off — and 45 pounds of brisket — to help an old friend. Acosta spent part of his childhood in Redford, and has known Marquez since he was young. “This has been the fourth time I’ve been [to the rodeo], and I’ve enjoyed it,” he said. “We sold out of everything.”

As the dust settled from the action-packed team roping competition, the festivities came to a close with the highly-anticipated beer barrel racing competition. A men’s team and a women’s team assembled from members of the audience took turns relaying across the arena. Each competitor ran from one end to another, drank a Lone Star as quickly as possible, and raced back to tag in the next competitor. While the men’s team eventually took the victory, not all of the male competitors were able to keep their Lone Stars in their stomachs.

Daena Baeza and Ysla Castro of Presidio led the women’s team with grace and poise. “Every time we come out, it gets better and better,” Baeza said of the event. Baeza’s husband, Cesar, also helped sponsor the rodeo through his business, Baeza Cattle Company. “It’s important to support your local people,” he said.

While the majority of the competitors came from the Big Bend and Permian Basin, one roper made an eight-hour trek with his horses from Weatherford, Texas. Fonzi Gonzalez, who works on the A-2 Ranch just outside of Fort Worth, took the journey to be able to catch up with old friends, the Navarretes, many of whom hail from Valentine. Gonzalez had never been to Redford before. “I thought it’d be kind of rough, but it was really good,” he said. “That’s what rodeo is — a family reunion.” 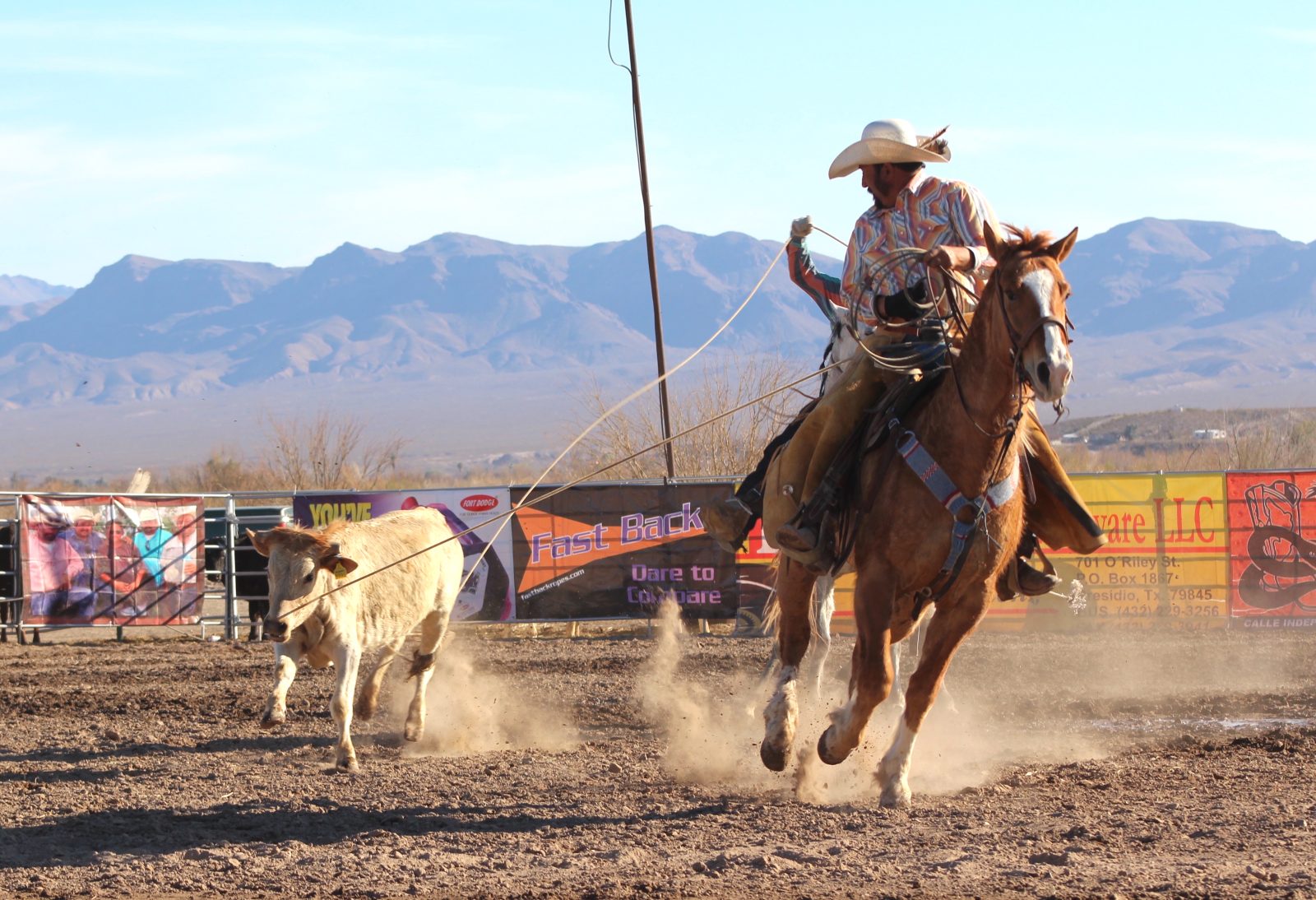