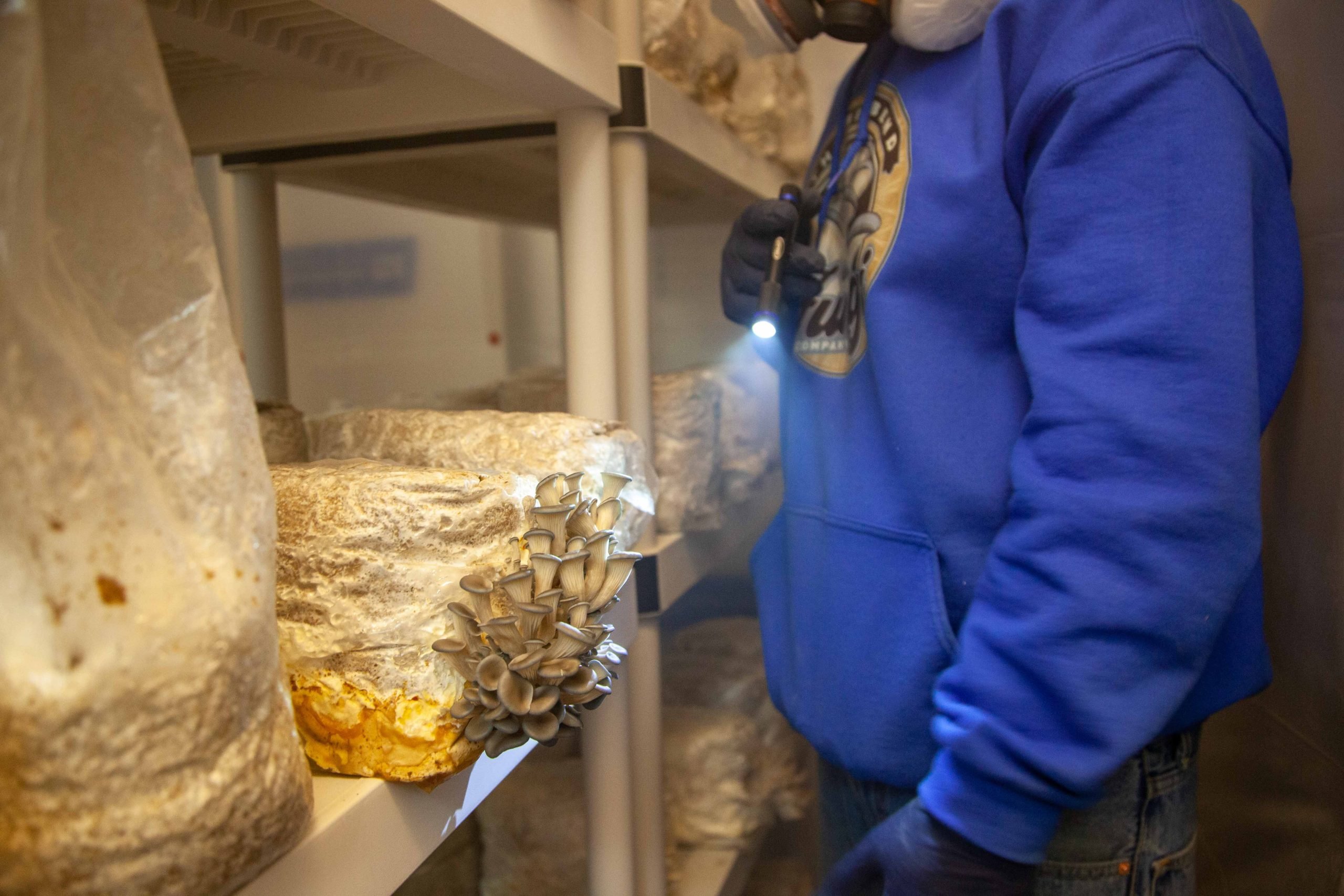 Cody McCollum, founder of Fort Davis-based mushroom farm Big Bend Fungi Company, in their grow room where fruiting blocks are stored to produce mushrooms. The grow room typically maintains 80 to 98 percent relative humidity and temperatures between 50 to 65 degrees. Ultrasonic foggers funnel fog into the grow room and an exhaust system pulls air out to cut down on the amount of spores and carbon dioxide. Photo by Mary Cantrell.
Subscribe

“Before I had even mastered it, I was like, you know what? I’m going to start a mushroom farm,” said McCollum of his company, which has been in operation for less than a year.

McCollum built his mushroom farm and much of the accompanying equipment himself out of a small two-car adobe garage in Fort Davis, where he grew up after relocating from Houston. He holds an Associate of Applied Science degree, with a specialization in heating, ventilation, and air conditioning (HVAC) from Midland College, a bachelor’s in psychology from the University of Texas Permian Basin and a master’s in Eastern theology from the University of Balamand. He was on track to pursue a PhD when the pandemic hit, and he began growing mushrooms as a hobby.

Out of desire to ensure quality control, gain more autonomy and comprehend the mushroom cultivation process from petri dish to plate, he quickly started acquiring supplies and scaling up his operation with the intention of growing enough mushrooms to turn it into a bonafide, profitable business.

“You just get better mushrooms when you do it all yourself,” said McCollum.

McCollum said he was initially drawn to mushrooms due to their appearance, health benefits, and the fact that they are found all over the world. He said because they are relatively inexpensive to grow he also liked the message they sent to the local community, particularly Fort Davis’ youth.

“When I was growing up and I looked out, there was nobody who came up on hard work and dedication. It was always tied to money or who they knew or something like that. This is a very poverty stricken community. Mushrooms are the great equalizer on a lot of levels: anybody can grow them,” said McCollum.

Fort Davis is transforming to offer more opportunities lately, he said, and he felt Big Bend Fungi Company would coexist well with the town while offering something different from the usual fare.

“I thought about what I wanted to bring to the community of Fort Davis, how it would benefit [the town] — would it be something that’s really unique? We have enough barbecue and beer. We need something else,” said McCollum.

Big Bend Fungi Company, already a limited liability company (LLC), is now working toward obtaining an agricultural exemption from the state, which allows agricultural landowners to have their property taxes tallied according to agricultural output. McCollum intends to purchase land and construct a fully-functional mushroom farm from scratch in Fort Davis sometime in the future. 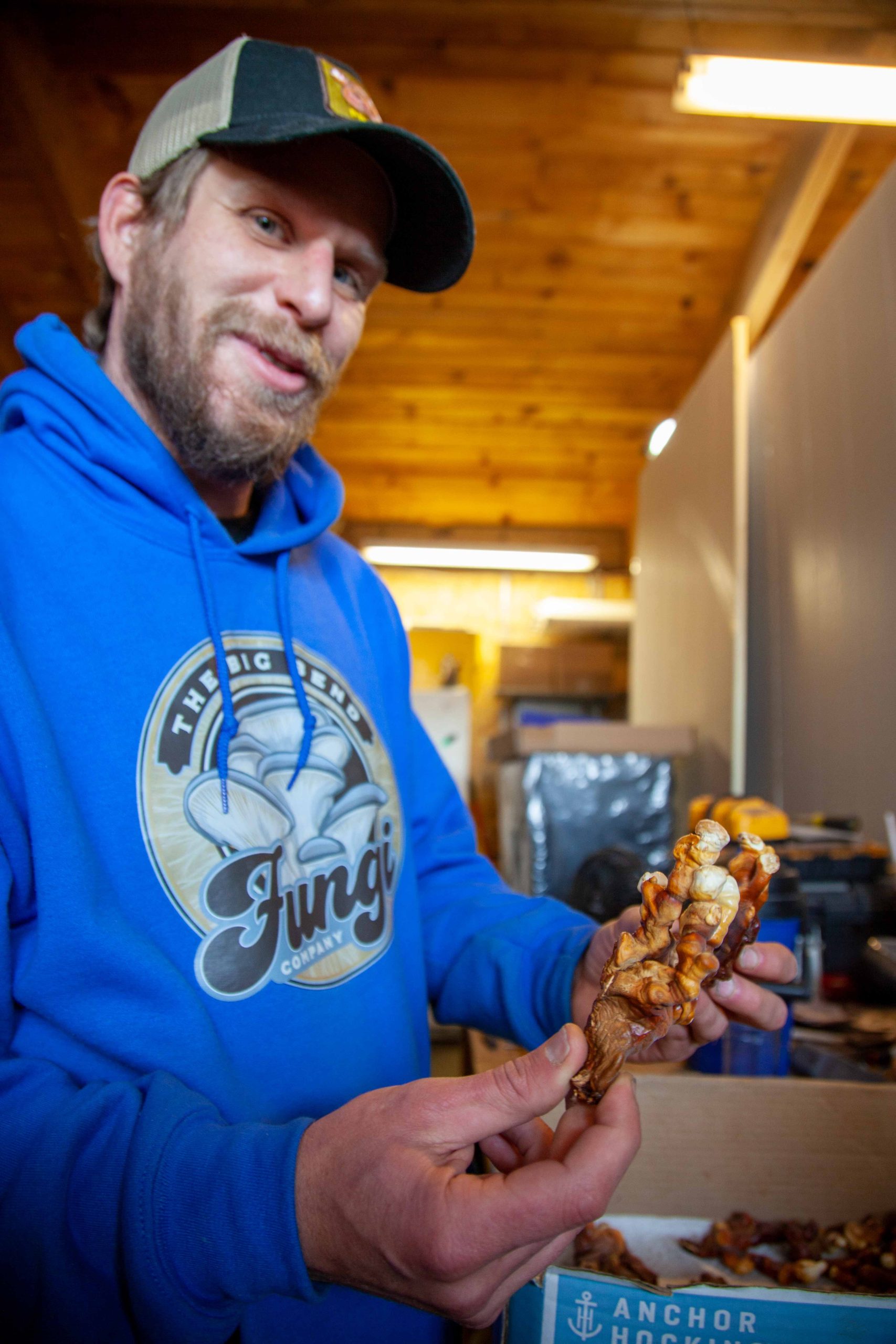 His current garage-turned-mushroom-farm consists of a lab and grow room which acts as a separate, fully-contained chamber within the larger structure. Every square inch of the 1,350-square-foot space is being utilized, the garage door just barely clearing the roof of the interior grow room. Wooden walls McCollum put up provide additional insulation. Structures McCollum added to the garage are designed to be taken out and moved for the company’s pending expansion, he said.

The lab area is awaiting the installation of a laminar flow cabinet with high efficiency particulate air (HEPA) filters, where McCollum will select cultures and make and pour petri dishes that contain mycelium, a root-like structure from which mushrooms grow. One 15 by 100 millimeter petri dish potentially contains up to a million pounds of mushrooms, said McCollum. Mushroom farmers are sometimes referred to as “mycelium runners” because of their work developing mushroom cultures. McCollum will harvest a piece, or tissue sample, of an idyllic mushroom, about the size of a grain of rice, and place it in a sterilized petri dish with agar, a gelatinized form of seaweed, to inoculate the mycelium.

“As things get bigger, [the lab is] where I’ll spend most of my time, because that’s what I need to do: find the perfect mushroom, keep that going,” said McCollum.

Another central part of the mushroom growing process is the creation and sterilization of vacuum sealed biodegradable bags that contain grain spawn, or substrate, the mushrooms grow on. McCollum built an atmospheric steam sterilizer out of a 55 gallon drum, which works off time and temperature to sterilize the grain, killing off any bacteria before introducing the mycelium. Grain bags typically spend up to 10 hours in the 196 degree sterilizer.

In the grow room McCollum minimizes contamination to the mushrooms by wearing sanitized latex gloves, and to himself by wearing a respirator — the grow room’s microclimate is temperature and humidity controlled to the fungi’s liking, but too much exposure to the air’s high spore count over time can be dangerous for humans. The highly-controlled environment runs off of timers and is complete with an exhaust system that removes excess carbon dioxide and spores from the air.

“This room, it’s filled with spores that you can’t really see, so they need to be removed from the room,” said McCollum. “The cleaner you can keep everything, the less contamination you’ll have.”

McCollum describes the smell of the grow room as “a whole lot of wet fungus.” 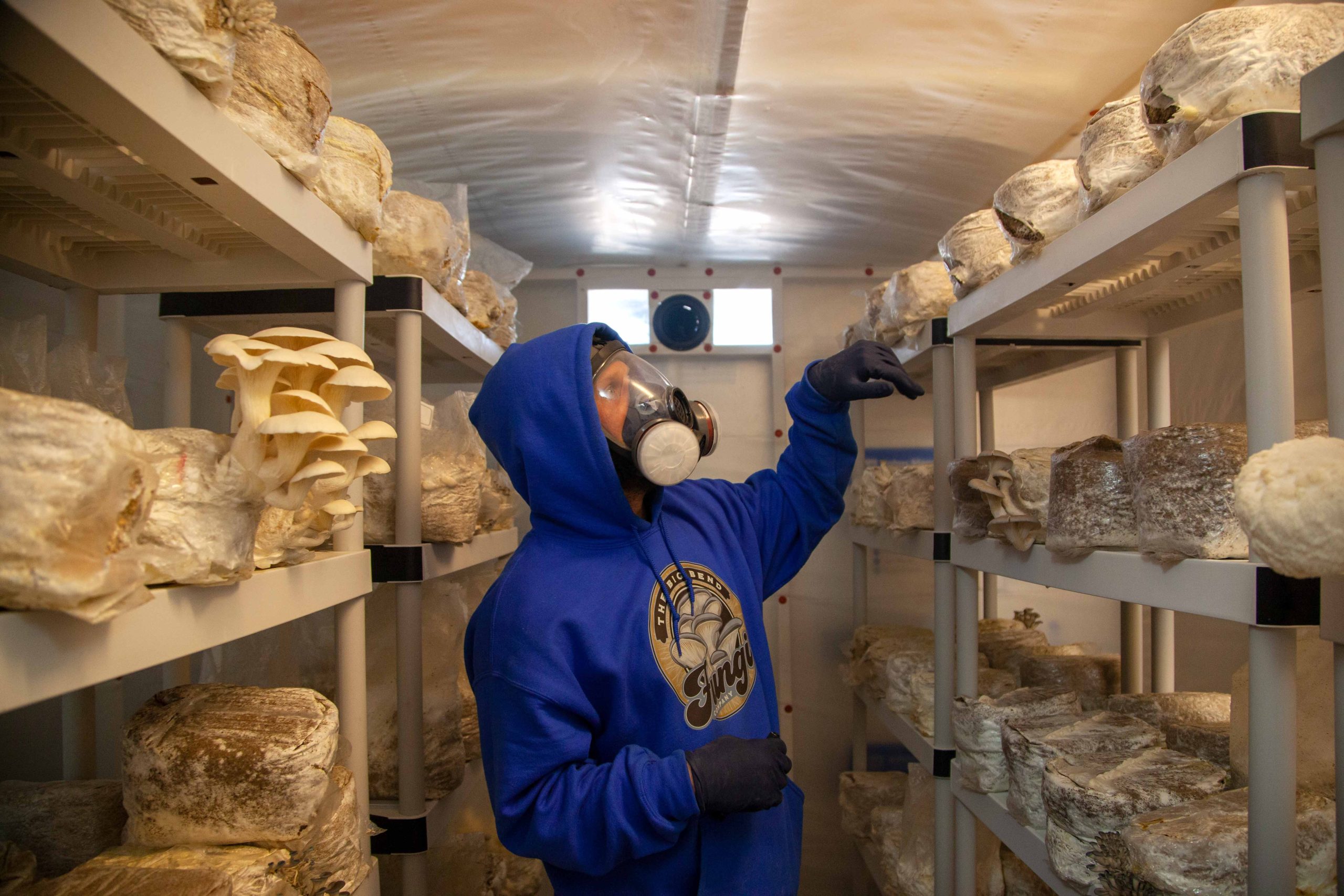 Big Bend Fungi Company produces 60 to 80 pounds of mushrooms a week out of a two-car adobe garage in Fort Davis which has been partially converted into a grow room. Photo by Mary Cantrell.

Inside the fruiting room’s plastic walls are rows of stacked shelves containing mushrooms growing on fruiting blocks of sterilized grain spawn. McCollum carries a small flashlight and ducks into the narrow aisles, illuminating the grow bags, some with freshly-sprouted fungi and others in earlier stages, to check on their progress and look for potential problems.

“Once things go in the grow room, that’s it. That’s considered the art part of it. We’re just throwing all our hard work into that grow room, hoping that the mushrooms do their thing,” said McCollum.

He said he confronts the same concerns on a weekly basis: “I hope these mushrooms grow, then I hope I can sell these mushrooms.” He’s learned it’s important to have a constant supply of fungi available. But that level of production requires constant supervision, he said.

“You are bonded to these mushrooms for the first couple years. There’s a need to be there every day. That’s how you make the money,” McCollum said.

McCollum is presently producing anywhere from 60 to 80 pounds of mushrooms a week. His ultimate goal is to reach around 96 pounds a week, to maintain the business’s viability. When he started Big Bend Fungi Company he wasn’t sure whether people were going to be interested in the mushrooms, but reception has been favorable.

His farmers’ market customers are excited to see more options for fresh produce, he said, and enjoy looking at the different varieties of mushrooms McCollum offers, which are beautiful and otherworldly, varying in color, size and shape. He has also been surprised that his medicinal lion’s mane mushroom tinctures, which support brain and nerve health, have garnered significant interest.

Cactus Liquors now hosts a cooler supplied with Big Bend Fungi Company mushrooms and restaurants like Blue Mountain Bar and Grill, Cochineal and Aster are regular customers. McCollum has been making all of the deliveries himself and still holds another job in addition to operating the mushroom farm. Fellow mushroom farmers further into their careers told McCollum not to expect a vacation for two to three years and to be ready to cry over the mushrooms at times. He said he was skeptical, but both of those forewarnings have come to fruition and the start-up process has been grinding.

“It’s trying to make yourself a farmer,” said McCollum. “Most of these people who have farms out here, their grandfather bought the tractor, and their father maintained the tractor. And now because they have the tractor, they’re getting into farming, too. Putting yourself in that industry, trying to build all those things, it’s just constant uphill work.”

While learning how to become a mushroom farmer, McCollum is simultaneously grasping what it means to be a business owner, running his own website, social media and outreach. McCollum donates his discarded fruiting blocks to local gardens, including the Marfa Food Pantry, which use them as fertilizer. In addition to offering area youth hands-on lab experience with Big Bend Fungi Company, he hopes to eventually host lectures, classes and free events.

“I really want to do this and give people opportunities,” said McCollum. “I’m gunning for the top. I am going to try and supply the entire Big Bend from Terlingua to Marathon, all over.”