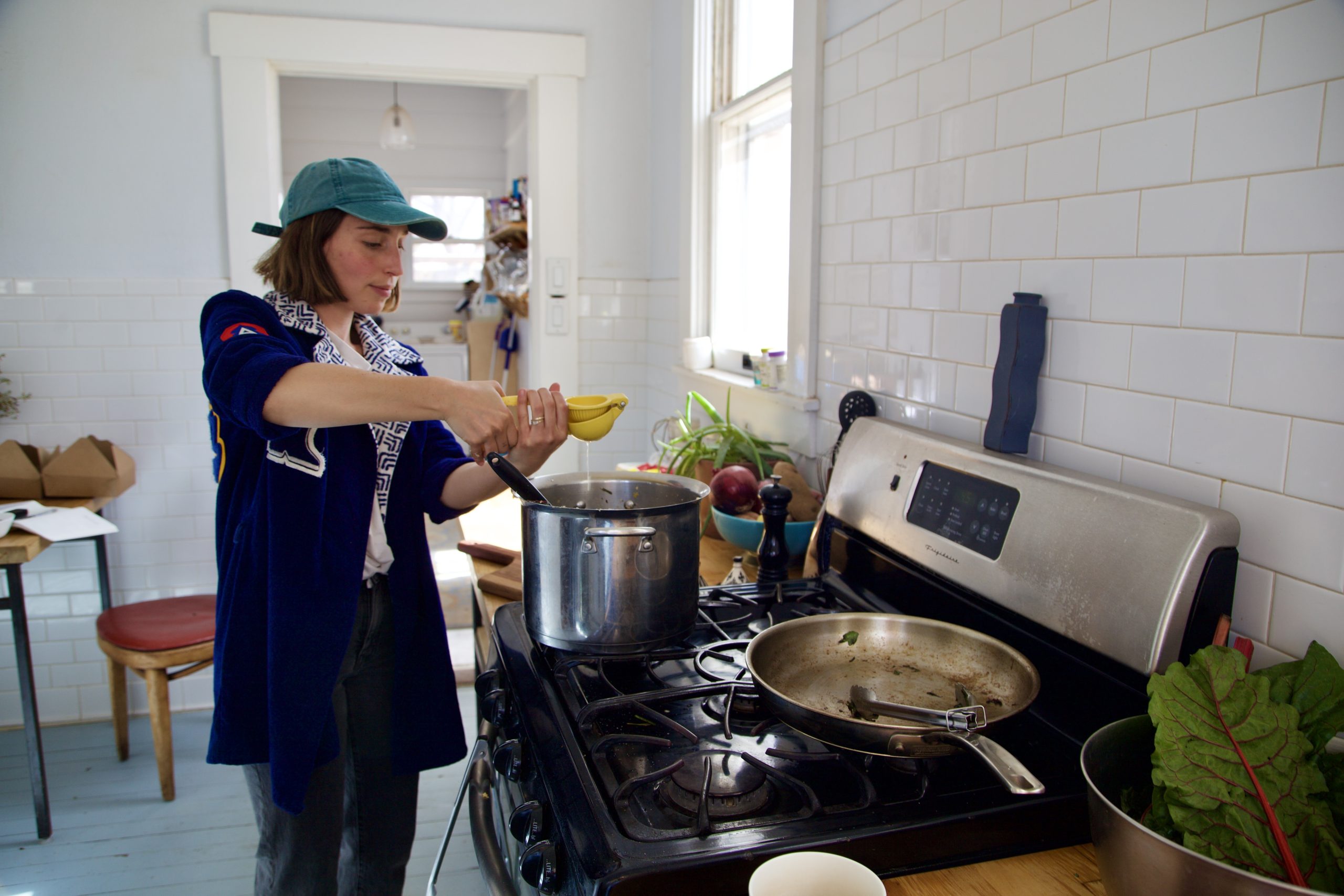 Marfa resident Natania Frydman puts the finishing touches on her vegan rainbow tabbouleh in her home kitchen. Frydman has been cooking and selling healthy food on Monday nights for fellow Marfa community members, but a new city ordinance might cause her to cease the practice. Photo by Mary Cantrell.
Subscribe

MARFA — Food establishments within Marfa city limits — including restaurants, retail food stores, temporary food establishments, mobile food units and roadside food vendors — are now required to obtain a permit from the city in order to operate, with a deadline of March 31.

“The purpose of this ordinance is to protect both public health and the public wastewater system,” states the city’s website.

Roane said the new process will also allow for the city to regulate all businesses fairly across the board, an issue previously raised as a concern, she said.

“Making sure that all food establishments are being held to the same standards listed in the permit application seems like a reasonable way to do that,” said Roane.

The ordinance further outlines various processes regarding food establishments, including a requirement to submit construction plans before work has begun if extensively remodeling or converting an existing structure.

Nonprofit organizations, such as churches, are exempt from the city’s new permit requirement, but must still comply with state rules, according to the city. Food establishments without a posted permit will face a $2,000 fine plus court costs. There is no fee to apply for the permit, which holders will need to renew annually.

The one-page permit application, which can be found on the city’s website, inquires as to whether at least one employee holds a Texas Food Managers Certification or a Food Protection Manager Certification, whether the facility is outfitted with a grease trap — as required by another city ordinance — and the pound capacity and company name of the grease trap. Copies of a most recent health inspection and Texas sales tax ID permit must also be submitted along with the application.

In a city council meeting hosted in early February, council members and Roane discussed establishing stricter guidelines for food establishments and people selling food out of their homes after it was discovered discarded grease was causing issues with the city’s wastewater system.

Public Works Supervisor Chuck Salgado and his team were visiting establishments to check for proper grease trap size and maintenance at the time. At the February city council meeting, Roane said the ordinance was meant to ensure anyone selling food was making it in a commercial kitchen so conditions could be properly regulated.

According to Texas’ food establishment rules, which the city is adopting, regulations do not apply to foods allowed by Texas cottage food laws — primarily baked goods and other items. Roane said essentially anyone selling food that could spoil depending on time and temperature requirements will need a permit.

The code enforcement department will see the new ordinance is being followed. According to Roane, Salgado and representatives from the code enforcement department are checking in with local establishments this week to make sure they are aware of the new permit requirements. So far, Roane was only aware of two establishments that have submitted permit applications, she said.

The new guidelines and permit requirements could make it difficult for someone making and selling food out of their home to operate legally. During the pandemic, some local citizens began selling food out of their homes for the community after restaurants ceased operations. Local food truck Line Thai got their start delivering food to Marfa residents before scaling up their operation.

Marfa resident Natania Frydman recently began making and selling food out of her home on Monday nights, when most local restaurants are closed, and has consistently received around 20 to 25 customers each week, she said. Frydman is an Ayurvedic health counselor and has plans to open Marfa Health House, a brick and mortar yoga studio, in the near future. She said that she enjoys participating in the holistic health practice of Ayurveda by providing nutritional food for others.

This week at home she was cooking up a large batch of vegan rainbow tabbouleh which consisted of swiss chard, asparagus, roasted almonds, couscous, lemon juice and more and is meant to promote liver health.

“What’s the easiest way to allow people to come into health? Through a meal prepared by somebody else with a lot of love, that day. It’s super fresh,” said Frydman. “My goal is to help people be healthy.”

She said she personally takes care to properly prepare ingredients and compost the waste from the meals she makes. Frydman said she finds cooking for others fulfilling and it allows her to make a good chunk of money in the process.

“It’s a great way for people to make an income in a way that both serves them and their community,” said Frydman.

Frydman said she is unsure how the city permitting process will affect her business, but said the level of control and need for regulation is frustrating.

Marfa resident David Gomez, who used to run Marfa Mystery Wings out of his home, released an episode of his podcast “Just Talk” this week dedicated to his point of view on the city’s new food establishment ordinance. He said he understood the reasons for the ordinance, but in the end was mostly against it.

On the podcast, Gomez said when he sold wings it allowed him to make extra money and he believes others should be able to continue to operate home food businesses as long as they have a food handler’s permit, as he did while operating Marfa Mystery Wings.

“I just feel that this ordinance in some aspects is bad because it’s not letting people make that extra buck,” said Gomez in the “Just Talk” episode. “I would start selling again if I could because it was such good money and it was something that this town didn’t have, or doesn’t have.”

He said for individuals who cannot work, selling food out of their homes can help them stay afloat financially. Gomez said he has heard some people argue that homegrown culinary operations take businesses away from traditional restaurants that are struggling to turn a profit. But, he said, the local real estate market in Marfa makes the prospect of opening a formal restaurant inaccessible for many people, and it’s nice to have more food options.

“A lot of people in this town support one another. So if somebody is posting that they’re selling Mexican plates, like flautas or enchiladas or something, I know I’m going to support them, because they’re trying to make a living,” said Gomez.

Editor’s Note: Natania Frydman works part-time in the coffee shop/restaurant side of The Sentinel.

wastewater food establishments
Stay in touch with The Sentinel
Related