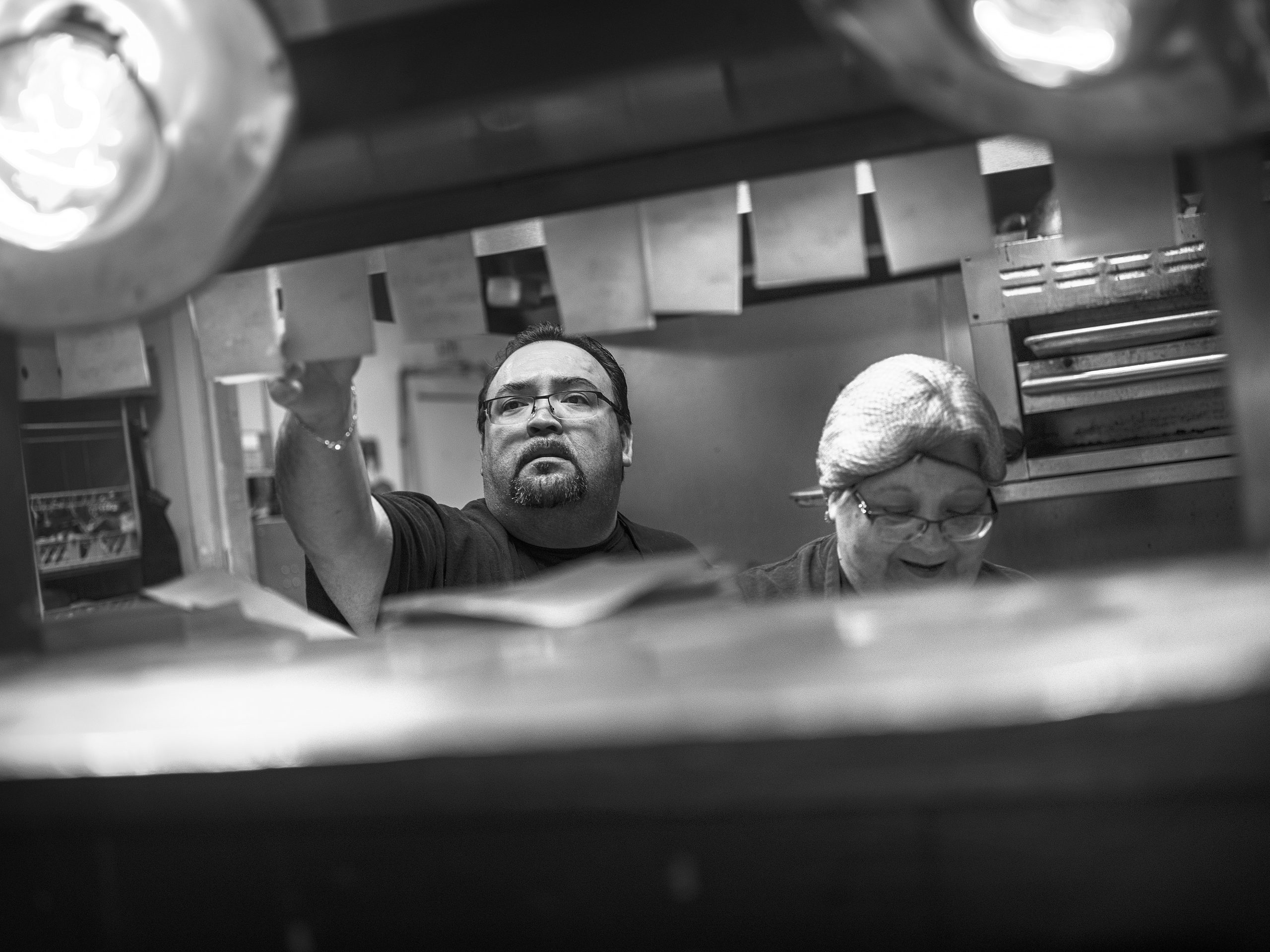 Retired Mando’s owners Mark and Liz Rodriguez at work in the kitchen in 2019. Photo by Maisie Crow.
Subscribe

MARFA — The building that once housed Mando’s — the beloved local Tex-Mex restaurant on the west side of town that closed its doors to disheartened, loyal customers in December 2019 — has sold to Austin restaurateur Shawn Cirkiel, chef and owner of Parkside Projects restaurant and hospitality group.

Cirkiel has yet to announce the style of cuisine that will be served in the new establishment, and said that while he knows he could never replace the original Mando’s, he hopes his venture provides the welcoming, community-oriented feel that made the local standby so beloved.

“Our goal with Mando’s is to continue on as a gathering place for Marfa and for all Marfans and to have a sense of place,” he said. “We’re not trying to do anything major [in terms of] style or brand or anything like that.”

At this point, there is no clear timeline for opening, but Cirkiel said he is currently in the process of evaluating the building to develop an action plan for necessary updates and fixes, and hopes to start work on the structure sometime this year.

Mando’s was run for nearly 20 years by Liz and Mark Rodriguez, and before that by Liz’s parents and family relatives. The earliest iteration of the restaurant dates back to 1960 when Armando “Mando” Uranga opened Mando’s Drive Inn, a Tex-Mex and burger joint. In 1963, Uranga built and began operating his business out of today’s existing cinder block structure.

Cirkiel grew up in Austin and his wife, Bria, grew up in Iraan in Pecos County. He said she competed in sports in Marfa growing up and ate at Mando’s while in town. The Cirkiels own a number of properties in town and have been visiting for many years, he said, but finally decided to take the plunge into opening a Marfa restaurant in order to spend more time here.

“Like many of us from Austin, all over the world, and all over Texas, we have been going out [to Marfa] for many years and just started to slowly fall in love more and more,” said Cirkiel.

The new Marfa restaurant won’t be Cirkiel’s first rodeo. He is deeply-rooted in the Austin restaurant industry, owning and operating a number of establishments around the city. Parkside, his flagship restaurant named for the Bronx housing project in which his father grew up, is a gastropub located on 6th Street specializing in farm to table ingredients and oysters.

Parkside opened in 2008, and since then Cirkiel has opened two Neapolitan pizzerias, Italian restaurant Olive & June, Tex-Mex eatery Vamonos, as well as two airport restaurants in the form of a juice bar and second Parkside location. The restaurant and hospitality group also runs an event center on central Congress Avenue.

Cirkiel, who studied at the Culinary Institute of America, first got his start working at his parent’s vegetarian restaurant as a teenager.

“I started in the kitchen as a dishwasher when I was 14, and I’ve been in the business ever since then,” said Cirkiel.

He said the search for a restaurant space in Marfa ended when he ultimately closed on the old Mando’s building this fall. The rich history of the site appealed to Cirkiel, who hopes to emulate the sense of community the old restaurant held.

“Mando’s in particular, the history and what it meant to the community, is similar to how we think of restaurants as gathering places, and parts of the community. And that’s what Mando’s was, and that’s what all of our spaces are in Austin,” said Cirkiel.

Cirkiel said he plans to hire locals to work in the restaurant, and expects to offer event space at the new venture, providing a spot for community gatherings such as school and athletics banquets.

Previous Mando’s owners Mark and Liz Rodriguez will be cooking up signature Mando’s burgers, complete with housemade green chile sauce, at an Easter egg hunt on the courthouse lawn hosted by the Marfa Chamber of Commerce on April 17.

The Big Bend Sentinel caught up with Mark to discuss how life has been for the couple since they decided to forgo Mando’s in 2019. Catering requests have been numerous, he said.

“Lots of people have called us, it’s been unreal — for private events, weddings and quinceañeras,” said Mark. “From big to small, they’ve been calling us. Of course, we don’t do that. Once we were out of the business, we were out of business.”

But the couple has come out of retirement on a couple of special occasions. In addition to the forthcoming Marfa Chamber Easter event, the Rodriguezes have served burgers at a fundraiser for St. Mary’s Catholic Church, where they sold over 500 patties, said Mark.

Mark is currently working at the Marfa Nutrition Center and Liz is helping out with various things here and there, he said. As to whether or not the couple finally took their long-awaited honeymoon — which was delayed by the duo being thrust into running Mando’s shortly after their wedding — the celebratory trip has yet to come to fruition.

“We haven’t gotten there yet,” Mark laughed. “We still look forward to that but right now everything keeps us pretty anchored down here.”

Mark has yet to meet Cirkiel, but said he anticipates the new eatery will be a departure from the restaurant he ran for nearly two decades.

“I guess it’s something different for Marfa, period. Another choice for everybody,” said Mark. “It’s not gonna be like Mando’s anymore, that’s for sure.”

But while there is no true replacement for the legendary Mando’s, that chapter has come to a close, said Mark, and he wishes the new restaurant the best.

”Hats off to them,” he said. “We had our run and it was great. Now it’s somebody else’s turn to take over and hopefully do great things with it.”