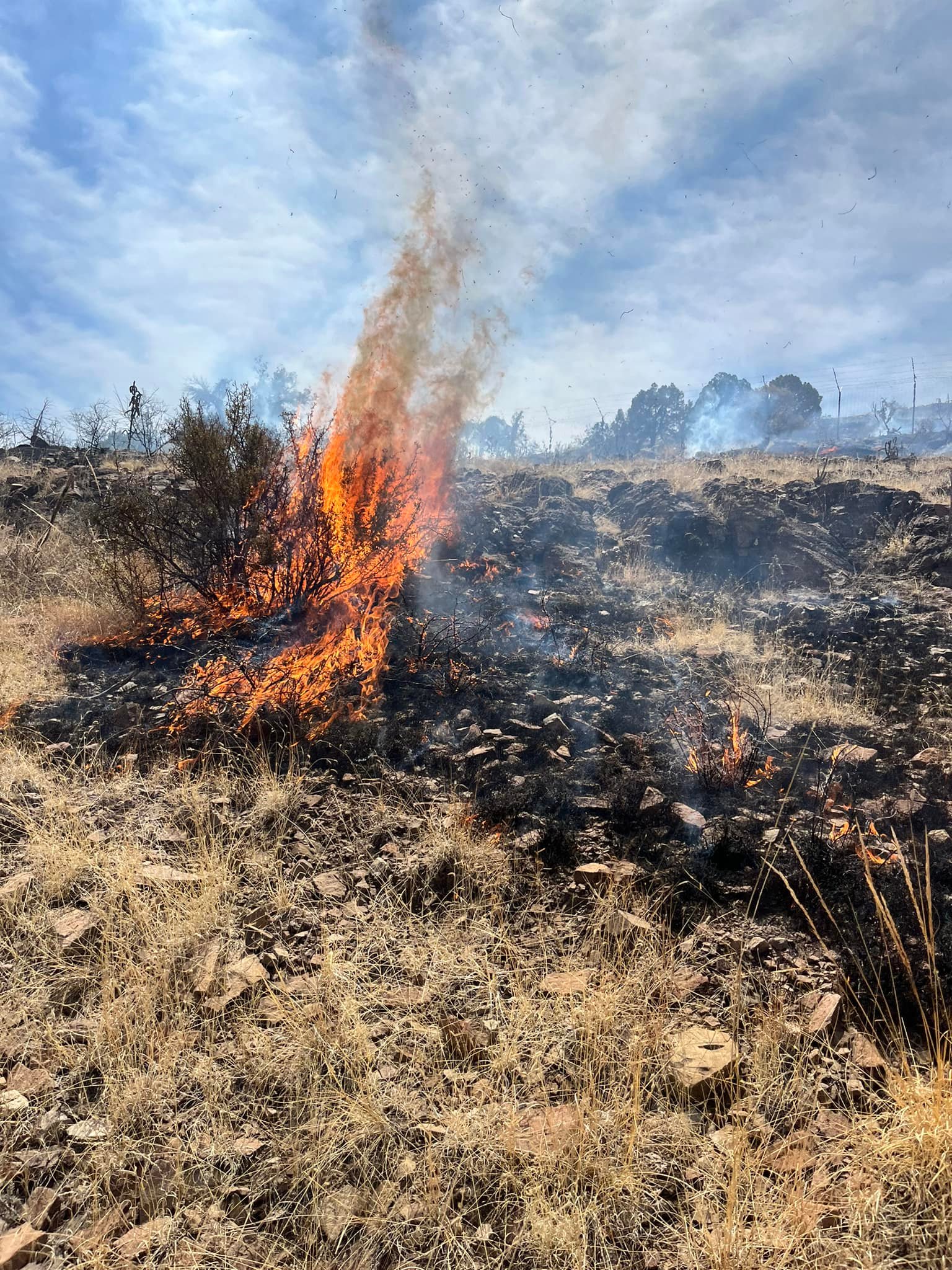 The Nunn fire broke out on Monday across rugged, remote terrain in northern Jeff Davis County. The cause of the fire was electrical. The fire grew to encompass 650 acres and was 50% contained at press time. Photo courtesy of Fort Davis Volunteer Fire Department.
Subscribe

JEFF DAVIS COUNTY — A wildfire broke out in northern Jeff Davis County on Monday, triggering a multi-agency response effort complete with firefighters, air tankers and helicopters. As of midday Wednesday, the crew successfully put out the active fire, according to Jim Fowler, public information officer for the Fort Davis Volunteer Fire Department.

Ground crews were still working Wednesday afternoon to fully eradicate the fire, focusing on putting out hot spots — yuccas, agaves and plants with thick vegetation which were still smoldering, said Fowler. As of press time, the fire encompassed 650 acres and was 50 percent contained.

Containment is measured by the percentage of the fire’s perimeter that no longer poses a threat of expansion, said Fowler. The fire’s perimeter was established by dropping retardant from air tankers onto the ground to create boundary lines. For an area to be classified as “contained,” the fire must be completely extinguished within 50 feet of the boundary lines of the fire. There was no change in acreage of the fire from Tuesday afternoon to Wednesday morning, according to Fowler.

The area saw an increase in humidity Tuesday night and was experiencing 25 percent humidity during the day on Wednesday, said Fowler, which helped subdue the flames. The area was still seeing 40 mph winds coming from the west, he said, but the progress was promising. Severe drought conditions in West Texas, including Jeff Davis County, lead to an increased likelihood of fires. 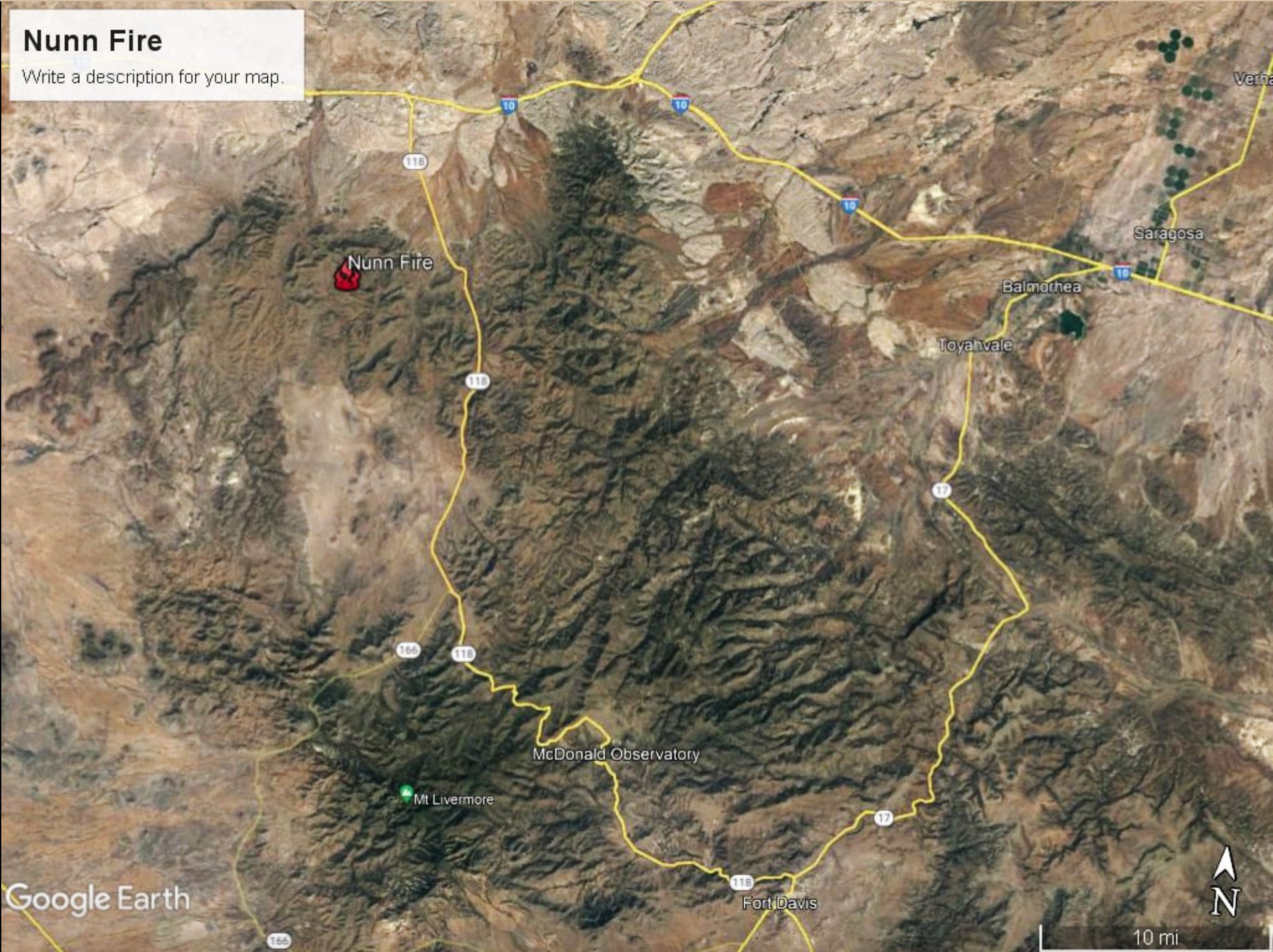 What is being referred to as the “Nunn” fire was determined to have been caused by an ant nest built inside of a water well’s electrical box that led to a short circuit, generating sparks that set off the grassfire, said Fowler. The fire is burning in a remote, rugged location 22 miles north of McDonald Observatory on the west side on Highway 118. The primary property affected by the fire is High Lonesome Ranch, and it had potentially spread to neighboring Rancho Del Cielo, but the exact boundaries of the fire have yet to be determined, said Fowler.

Texas A&M’s Forest Service was working Wednesday to eradicate the remaining hot spots. A wind advisory was in effect in the area until 7 p.m. Wednesday night and a red flag warning, or fire danger warning, was in effect until 9 p.m., according to the Texas A&M Forest Service. A break in strong winds is finally expected to arrive Thursday morning, according to the service.

“Get on the fire quickly, with a lot of people and resources if you can, and work it aggressively, always with safety in mind. But really work to get that fire out,” said Fowler of their early strategy.

“We don’t want it to become a big fire like we’ve had in the past that takes resources away from the rest of the state,” said Fowler.

The Texas A&M Forest Service was called out Monday to assist local firefighters. Fowler said there were around 10 crew members who camped out overnight at the site on Monday and Tuesday.

“It is hard to get enough people. Typically we will work a fire as an initial attack, but if it looks like it’s going to be a large fire or we’re not going to be able to get it out we will call the Texas A&M Forest Service,” said Fowler.

Air tankers dropping fire retardant operated in the area on Monday and Tuesday, forming retardant lines to stop the fire’s advance. The retardant makes it more difficult for grass to burn and by containing the spread it allows crews on the ground to better focus their efforts, said Fowler. On Tuesday, tankers were swapped out for a helicopter due to high winds. The helicopter was able to perform more targeted drops on the active fire, said Fowler.

Winds were originally blowing from the southwest, causing smoke and the fire to be driven northeast, he said — although due to the grass not being very dense, the smoke wasn’t heavy.

Both High Lonesome Ranch and neighboring Rancho Del Cielo are working cattle ranches that may be negatively impacted by less available grazing land for cattle, said Fowler, though no structures were in immediate danger during the emergency event. Rancho Del Cielo’s headquarters were in the path of the fire, but it would have had to travel miles, jumping mountainous terrain, to reach the structure, he said, and given the current status of the fire that was extremely unlikely to occur.

For up to date information on the fire, visit https://www.facebook.com/FortDavisFireDepartment/ and https://inciweb.nwcg.gov/incident/article/68001