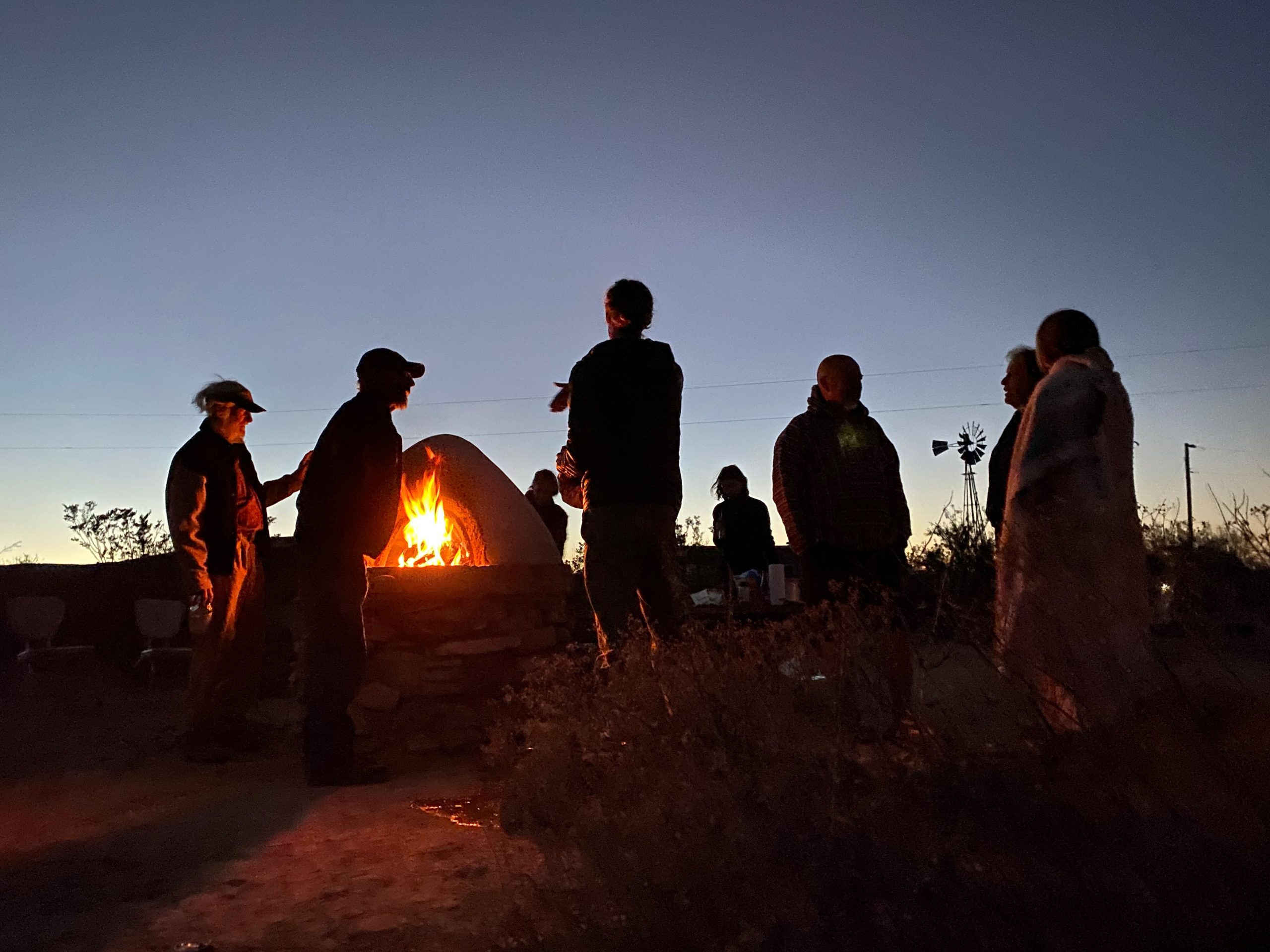 Students at Terlingua’s School of Constructive Arts celebrate a long day of hard work around the pizza oven. Photo by Voni Glaves.
Subscribe

TERLINGUA RANCH — This Saturday, the board and volunteers of the School of Constructive Arts invite the public to join them for a clean-up event that will culminate in a pizza party at the school’s Terlingua Ranch campus. The event marks the “final push” toward clearing away construction debris and personal belongings of the late Don Bryant, whose ideas served as the catalyst for the organization.

The School of Constructive Arts is a field school based in Bryant’s former homestead. Bryant, a longtime Terlingua resident known for building distinctive domes out of rebar and ferrocement, attracted numerous formal and informal students to his property throughout his lifetime. “He was beloved by many,” said Bob Estrin, director of the School for Constructive Arts. “He was a builder, a teacher, a farmer, kind of an eccentric guy.”

Estrin and his board now use what’s left of Bryant’s homestead to help teach a new generation of earth builders ways to construct with the local environment in mind. Students at the school will learn to put concepts like passive cooling and water catchment into practice, all against the dramatic backdrop of the Christmas Mountains in South Brewster County.

The school currently hosts seasonal volunteers and hopes to expand their programming through collaborations with universities and local schools. In order to make those connections, they need to make the campus a hospitable place for visiting builders so that they can be housed on the school’s remote property. “We’re going to build our first livable facility,” Estrin explained. “It’s going to be a building that combines earth construction — using ancient techniques — with modern technology.”

The facility will sleep eight to 10 students and include workshop and classroom spaces. A large part of the effort will go toward installing water infrastructure, including a solar-powered pump house and shower. The school’s next class of volunteers will take on these projects, putting their newfound skills to the test as they go.

“We need a clean slate to move into the next phase of construction on our land,” Estrin explained. He hopes that neighbors from around the Big Bend region will come out to help the effort and learn more about the school’s mission.

The amount of effort Estrin and his volunteers have put in is tremendous. “I think it’s important to note how much has already been done even though it’s not very visible, because much of what we’ve done is remedial,” he said. “I’ll put it this way: we’ve removed over 3000 cubic feet of garbage.”

To reward those who make the journey, the school will treat volunteers to pizza made in their wood-fired oven — itself originally a volunteer project aimed at teaching key concepts in earth building. “I wanted a project that would teach some of the core skills but was small and achievable within a timeframe,” Estrin explained. “Plus, we wanted something that would lure people to our distant campus. It turns out pretty damn good pizza.”

Volunteers are welcome to show up anytime in the afternoon and stay through the evening’s festivities. They should be dressed for an afternoon moving around in the Terlingua sunshine — sun protection and plenty of water is a must. Some refreshments will be provided, but guests are encouraged to BYOB and are welcome to bring musical instruments to play around the campfire.

The School of Constructive Arts campus is newly Google Map-able, but to navigate the old-fashioned way, start heading east on Terlingua Ranch Road toward the lodge. At 4.8 miles in, take a right on Snake Road. The campus will have a sign posted 1.2 miles down Snake Road to mark the entrance.

“We’re in the final stages of this major effort, and we want to celebrate it together,” Estrin said.