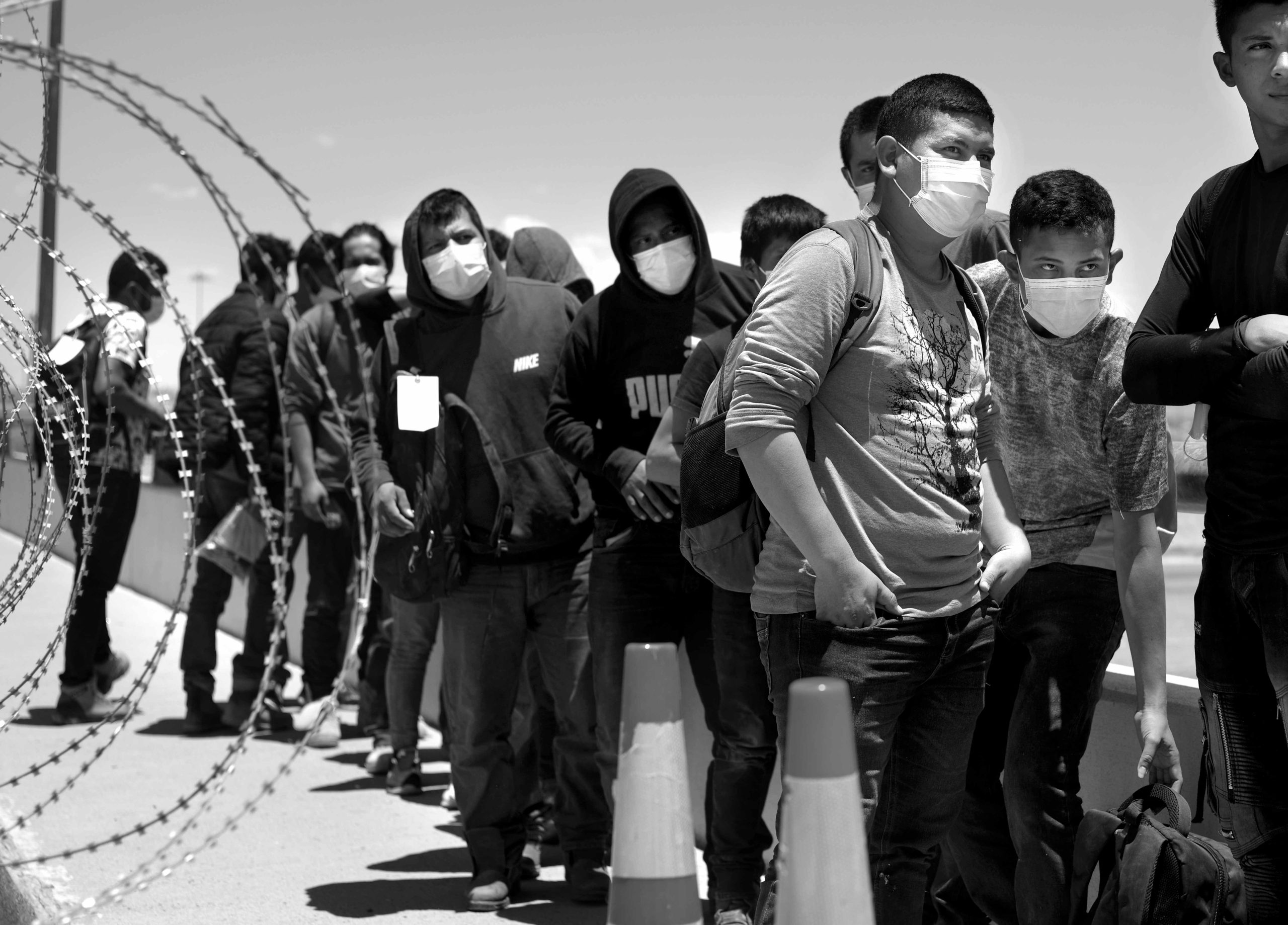 A group of recently apprehended undocumented immigrants lineup at the U.S.-Mexico border as they prepare to walk back into Mexico after being expelled from the U.S. under Title 42. Staff photo by Maisie Crow.
Subscribe

FAR WEST TEXAS — The Centers for Disease Control and Prevention recently announced Title 42, a controversial policy which allows for the immediate expulsion of undocumented migrants from the U.S.-Mexico border, will be suspended on May 23.

The CDC first authorized Title 42 under the Trump administration, during the emergence of the COVID-19 pandemic in March 2020. The 1944 Public Health Service Act was created in order to allow the government to suspend entries from other countries to “prevent spread of communicable diseases.”

Title 42’s opponents have argued it supersedes U.S. asylum law and violates human rights. Under the public health order, migrants and asylum seekers are expelled swiftly, without the right to trial or the ability to make an asylum claim. Expulsions carried out under the order also carry no legal repercussions, as they are carried out without criminal proceedings. Since March 2020, DHS has carried out over 1.7 million migrant expulsions under Title 42, according to government statistics.

The CDC ordered the suspension of Title 42 last week, stating it was no longer needed in order to prioritize public health or prevent coronavirus.

“With CDC’s assistance and guidance, DHS has and will implement additional COVID-19 mitigation procedures. These measures, along with the current public health landscape where 97.1% of the U.S. population lives in a county identified as having ‘low’ COVID-19 Community Level, will sufficiently mitigate the COVID-19 risk for U.S. communities,” the CDC said in a press release.

Texas’ Republican leaders, including senators John Cornyn, Ted Cruz and Rep. Tony Gonzalez of Texas’ 23rd Congressional District, are urging the Department of Health and Human Services and the Department of Homeland Security to keep Title 42 in place. A letter signed by Cornyn, Cruz and Gonzalez argues the DHS appears unprepared to handle an increase in apprehensions along the U.S.-Mexico border that would likely follow the suspension of Title 42.

“At the current levels of cross-border migration, DHS currently lacks adequate capacity to process and detain all migrants apprehended along the southwest border … Furthermore, small border communities lack the appropriate housing, transportation, and healthcare infrastructure to manage the ongoing release of migrant populations into their jurisdictions,” said the letter.

Under Title 42, undocumented migrants can be deported in as little as 15 minutes, according to government statistics, a process that otherwise lasts as long as 50 hours for an individual or 62 hours for a family unit.

“Not only does this take a toll on our agents, it creates a new incentive for migrants to make the life-threatening journey across the border and, with the hottest months of the year on the horizon, we’re bound to see the already historic numbers double, leading to a record number of migrant deaths,” said Rep. Gonzales in a press release following a briefing with Border Patrol agents.

Groups including the American Civil Liberties Union (ACLU) and The Southern Border Communities Coalition (SBCC), who have been advocating for the suspension of Title 42, have released statements in support of the CDC’s decision.

“The new order is a huge step forward in the fight to ensure that people fleeing violence and persecution will once again be able to seek safety in this country, as our laws require. Title 42 has been misused for over two years to illegally shut down asylum at the southern border and send thousands of people directly back into harm’s way,” said Jonathan Blazer, director of border strategies at the ACLU.

The SBCC issued a press release on Wednesday urging senators to vote against anti-immigrant amendments — aimed at keeping Title 42 in place — that the Senate’s Republican leadership may attempt to tack on to a new COVID relief bill, which will be voted on soon.

“The United States has the capacity to face the challenges at the border that may result from ending an unethical use of Title 42,” said Vicki B. Gaubeca, director, Southern Border Communities Coalition. “Now is the time for our nation to right those wrongs and implement infrastructure and policies that welcome people in a safe and dignified way, and connect them quickly to resources.”

Litigation to stop the suspension of Title 42 is already underway, with Republican officials in Louisiana, Missouri and Arizona filing a lawsuit against the CDC, arguing the agency’s decision is “arbitrary and capricious” and could spawn “catastrophe” at the border.

New technology is further assisting capabilities of Border Patrol agents, said Davis, and initiatives like Operation Stonegarden, a federally-funded program which provides money for overtime and equipment to local police and sheriff’s departments for Border Patrol assistance, are enabling local law enforcement agencies in the Big Bend region to offer support for CBP.

U.S. Customs and Border Protection Commissioner Chris Magnus said in a statement that as a result of CDC’s termination of Title 42, CBP is expecting an increase in migrant border crossings above current high levels. He said they intend to utilize on-ground monitoring, drones and support personnel to free up Border Patrol agents from processing duties when possible.

“There are a significant number of individuals who were unable to access the asylum system for the past two years, and who may decide that now is the time to come,” said Magnus. “We are doing everything we can to prepare for this increase, ensure we continue to process people humanely, and impose consequences on those who break the law. At the same time, we will continue to use all available resources to secure our borders.”

title 42
Stay in touch with The Sentinel
Related