Cause of Columbia Street fire out of reach for now, says Marfa fire chief 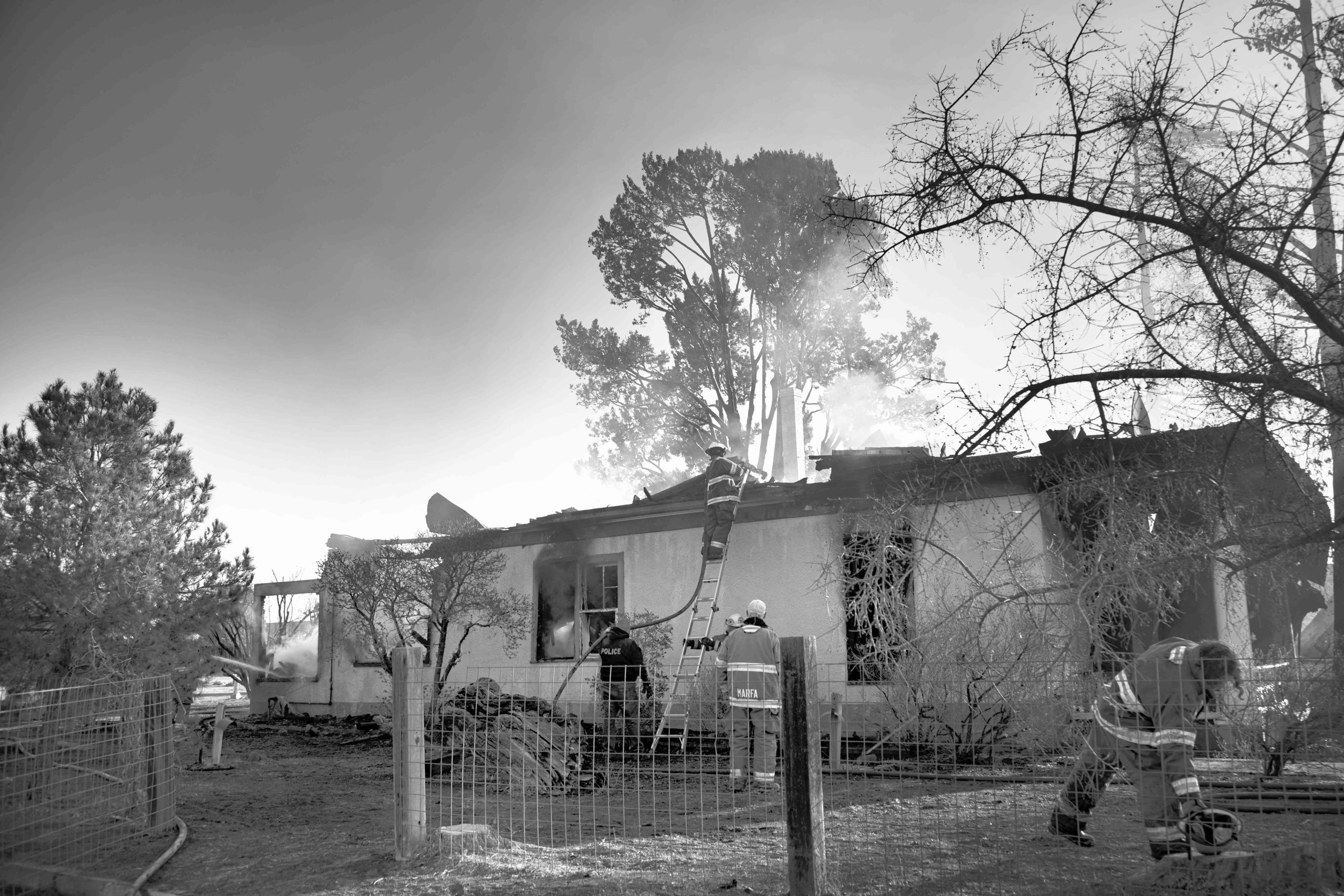 Firefighters with the Marfa Volunteer Fire Department work to extinguish a fire at a Columbia Street home on Saturday morning. Photo by Maisie Crow.
Subscribe

MARFA — Early Saturday morning, in the pre-dawn hours, neighbors to 401 E. Columbia Street heard a woman screaming for help and ran to offer assistance, only to be met with a raging inferno that had all but decimated the home. By the time the Marfa Volunteer Fire Department arrived, it was far too late to salvage the structure, said Fire Chief Gary Mitschke.

“When we got on the scene, it was already gone,” he said.

On Monday, firefighters were still putting out lingering “hot spots” under the rubble, and on Tuesday they were still keeping an eye on the spots — the top floor of the two-story home had collapsed onto the ground floor, trapping those hot spots underneath. Though the flames had been largely subdued by 7 a.m. Saturday morning — within an hour and a half of the department’s arrival — firefighters will likely continue to monitor the situation, said Mitschke, just to be certain it was completely extinguished.

The fire seems to have started in the back, north-facing side of the house before spreading to the front, said Mitschke. But as for what sparked the fire in the first place, the fire chief offered little clarity. He said he was not optimistic about his department’s ability to pinpoint the cause in a definitive fashion, given the extent of the damage and the volume of debris.

“I’ll be perfectly honest — it’s going to be very, very difficult to make a definitive [determination],” he said on Tuesday. “The actual cause, I really don’t think we’re going to be able to determine that.”

But Mitschke said he is still in the process of interviewing people for his report on the incident for the fire department — he has met with the homeowners, but wants to speak to a few eyewitness neighbors as well. He will likely wrap up his report next week, he said.

The shocking incident is still fresh, having burned the quaint, tree-lined home near Nevill Street — once belonging to the late artist Donald Judd — to a crisp just a few days prior. The trees in the yard are now singed black. What remains of the house itself is cordoned off with yellow tape, cautioning onlookers to give the unstable structure a safe distance.

At the time of the fire on Saturday, a family of three was inside the house — all three were safely evacuated before the fire department had even arrived, with the help of neighbors who jumped into the role of first responders around 5 a.m.

“I think it’s a miracle they did get out alive,” said Mitschke.

Retired Border Patrol Agent Humberto Hernandez, who lives nearby, was the first to arrive on the scene Saturday morning. When he heard screams coming from the house, he looked out his window and saw the flames — when he sprang into action, he was just being a “caring neighbor,” he told The Big Bend Sentinel on the morning of the fire. He wasn’t afraid for his own safety, he said: “I was more concerned for the safety of everybody else.”

When he got to the house, he found a woman and a small child standing in the yard, having already escaped the blaze. He guided them to safety, then helped rescue a man who was still trapped on the top floor. At that point, Presidio County Sheriff Danny Dominguez had arrived on the scene with his son-in-law, having heard the screams from his nearby home.

“We heard screams, and I told my son-in-law, it sounded like a lady screaming in distress, so we better go look,” said Dominguez the morning of the fire.

Dominguez asked the woman if anyone else was still inside, and she said her husband was on the top floor. Dominguez and his son-in-law, along with Hernandez, grabbed a ladder and helped the man climb down from the window where he was gasping for air. The man was treated by emergency responders for smoke inhalation at the time, according to Marfa Police Chief Steve Marquez, but he was not transported to a hospital.

Though Mitschke said he believes his report will point to something “general, not anything specific,” he hopes to have more information on the fire in the coming days. “There may be more definitive things in the future,” he said.

This is a developing story. The Sentinel will provide more information as it becomes available.