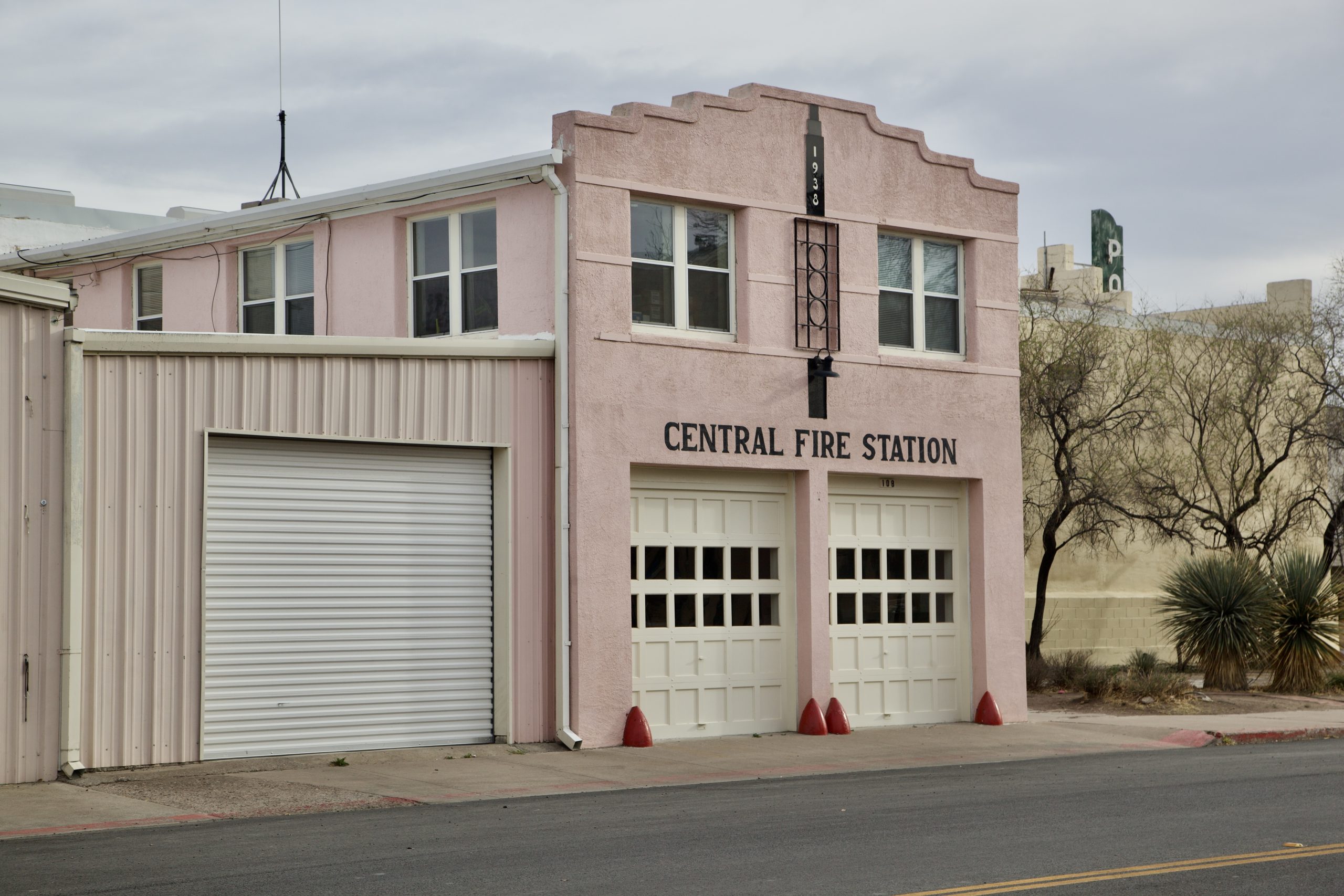 The Marfa Volunteer Fire Department recently received approval on their formal plans to expand their facilities from the city, who owns the building. The project now enters into the next phase of attracting a contractor in order to begin construction. Photo by Cody Bjornson.
Subscribe

MARFA — Marfa’s Volunteer Fire Department station, which has been slated for a much-needed expansion for a handful years, may soon see the reality of a new-and-improved station, with the city recently approving the solicitation of requests for bids from contractors.

The proposed expansion will primarily involve building onto the back of the metal building where trucks, vehicles and equipment are currently stored, allowing the department to double their weatherized storage space. The project also involves constructing a new ADA-accessible bathroom with a shower, laundry room and kitchen. The overall design prioritizes simplicity and economic viability, said Councilmember Yoseff Ben-Yehuda, who is also a member of the volunteer fire department, in a recent city council meeting.

The additional space should allow for the relocation of lockers and improvement of training space, said Mitschke. The way he sees it, the expansion will be a gradual process.

“Hopefully, it’ll give us enough room to do everything we need to do,” said Mitschke. “It’ll be what it is, then we’ll figure out how we’re going to utilize it the most.”

MUDLAB, a local architecture firm run by Elizabeth Farrell and Zeke Raney, donated their time to render architectural plans, which were also reviewed by a number of contractors. Raney is a member of the volunteer fire department.

The fire department will essentially be taking up the remainder of their lot’s available space in order to extend the metal structure, which was originally built in the 1970s and was designed to be expanded upon. Fire engines and hoses sitting outside deteriorate at faster rates, said Mitschke, due to sun exposure. Storing the emergency vehicles outdoors also poses problems in the winter, when water has to be drained from fire engines to prevent valves from freezing.

“You can’t really have [fire engines] ready to go when they’re sitting outside during the winter,” said Mitschke.

The fire department also recently secured an easement from the appraisal district for a permanent fire lane which will allow them to run a one way system in and out of the facility with their emergency vehicles.

There is around $175,000 currently budgeted for the project, $50,000 of which has been provided by Presidio County and $122,000 from the city. The city owns the fire station and has budgeted for the expansion for a number of years. In an earlier budget-focused meeting this fall, Ben-Yehuda advocated to increase the existing funds allocated from $82,500 to $122,000 for the fire house revamp, with Mayor Manny Baeza urging the department to get moving on spending the money already budgeted.

But the fire department has argued their reasoning for continually rolling over funds was necessary in order to beef up the project’s budget to a feasible amount.

“How do you start a project that you don’t have enough money to pay for?” said Mitschke. “You can’t start something like this and stop in the middle of it because you run out of money. You really need to have the funding available to do it.”

At a city council meeting last week, Ben-Yehuda presented the plans for the expansion project and stated it was now up to the city to decide whether they wanted to proceed with the project or not.

“This is the city’s building. The city has allocated funds to it. You’ve got a group of 20 to 25 dedicated volunteers that runs this department that shows up weekly, and for incidents, to take care of the building, to take care of the equipment,” said Ben-Yehuda. “We’ve gone through the process to try to bring a proposal.”

Council members and the mayor were excited to see the plans for the expansion and voted to approve putting out requests for bids, although some expressed concerns regarding their ability to attract the right contractor.

Marfa’s fire station is also designated as the go-to the Emergency Operation Center for Presidio County, meaning the building serves as an emergency management site for local officials in the case of a major incident. Mitschke said the space last served as an EOC in 2011 during the Rock House Fire. Mitschke also serves as emergency management coordinator for Presidio County.

The fire station’s original 1938 Art Deco-style, pink-hued building is an iconic structure with a lot of history, said Mitschke. Marfa’s volunteer fire department can trace their roots back to the year 1910, said Mitschke, who has researched the service. He said he wanted to hold onto the existing site and work on making it as functional as possible, as opposed to building from scratch.

“I don’t want to give up the history of the old station here,” said Mitschke. 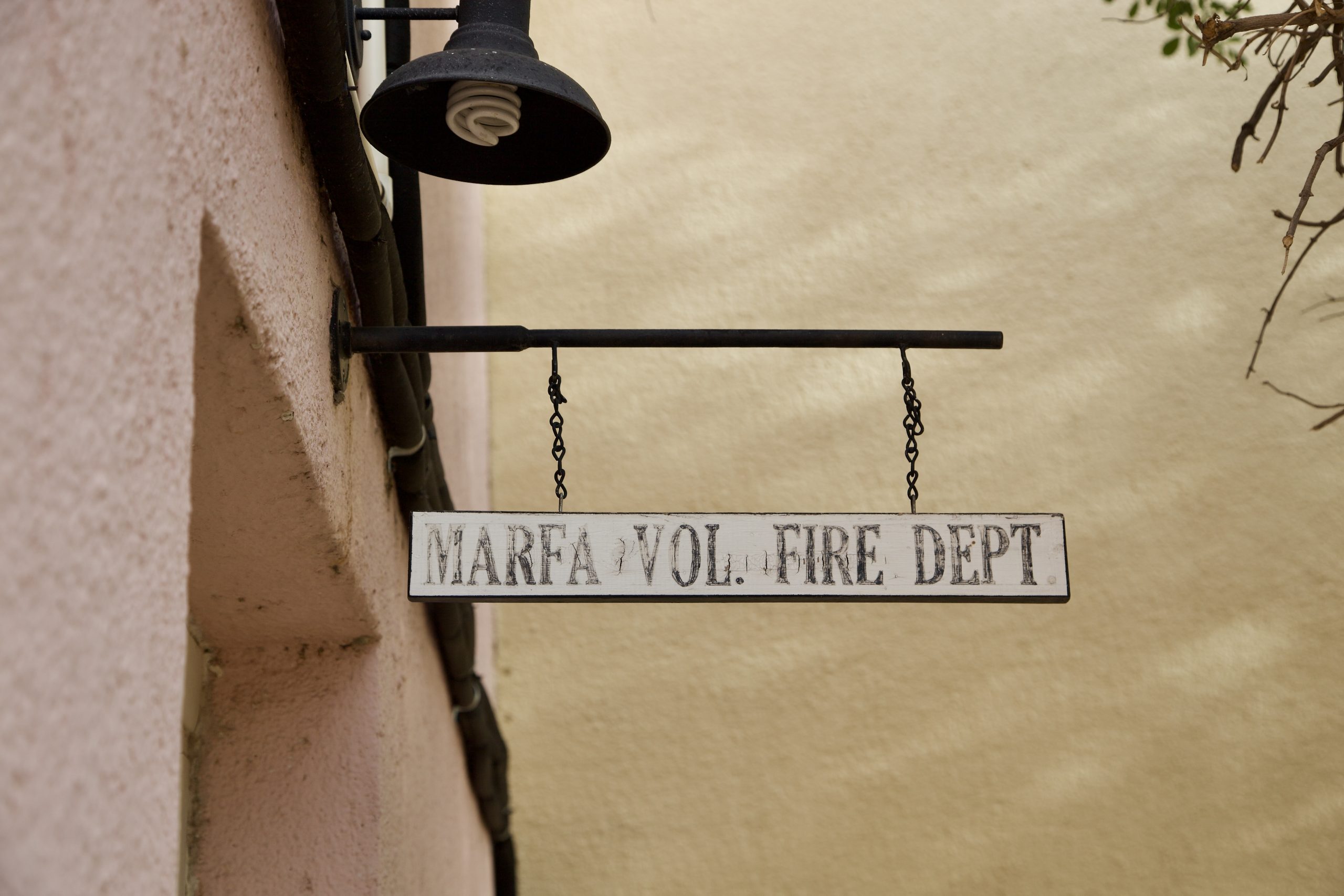 The original station, which has been expanded on with additional structures, is complete with an upstairs living quarters where firefighters used to live, and an old-fashioned fireman’s pole. Mitschke hopes to declutter the area, which is currently a miscellaneous storage space, and turn it into a mapping area. He said he’d also like to better display some of the old archival images and artifacts from the station.

Mitschke is currently operating with a crew of around 25 volunteer firefighters, he said. Their bylaws allow them to have up to 34 members. He said the expansion project will better support their crew and let them know their hard work is appreciated.

“Anybody who hasn’t been in fire, doesn’t really understand how much work it really takes to do this and what everybody gives up to do this. We have pagers, we’re on call 24/7, we don’t get a day off,” said Mitschke.