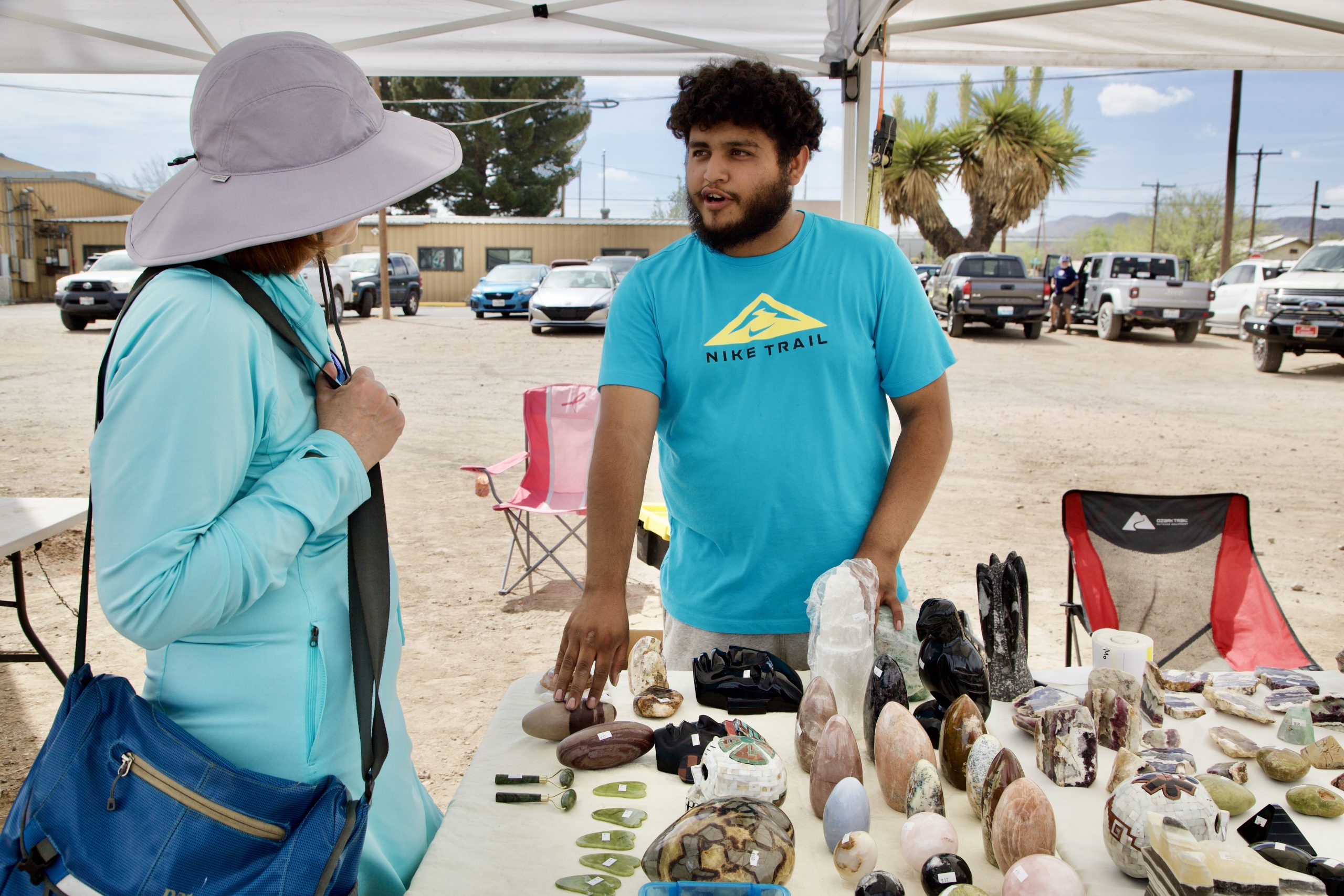 Alex Nuñez chats with a customer this past weekend at Alpine’s 31st Annual Gem and Mineral Show. Photo by Mary Cantrell.
Subscribe

ALPINE — Various rocks and minerals in the form of calcites, fluorites, agates and many more shone underneath the West Texas sun, dazzling their viewers this past weekend at Alpine’s 31st Annual Gem and Mineral Show hosted by Big Bend’s Chihuahuan Desert Gem and Mineral Club.

The well-attended, three-day celebration, hosted at the Alpine Civic Center, consisted of around 45 vendors both indoors and outdoors. Shops from the surrounding area and from around the U.S. displayed their wares, selling everything from raw, unrefined rock specimens to finished jewelry products and other lapidary art.

Chihuahuan Desert Gem and Mineral Club President Judith Bruski and show dealer Sue Franklin of Davis Mountains and Balmorhea Rock Shop hosted this year’s fair. In addition to putting on the annual show — which was back this year after being canceled in 2020 and 2021 due to coronavirus — the club seeks to share the appreciation and education of earth sciences with its members and the public.

On Friday morning, Alex Nuñez of El Paso-based Nuñez Minerals slung deals beneath a pop-up tent outside, bagging up his customers’ purchases and offering them insights about his products — a variety of rocks, minerals and jewelry Nuñez hand makes. Small, colorful, polished rock charms for Croc shoes, Nuñez’s idea to capitalize on the popular fad, sat on a neatly-displayed table next to other-wordly orbs shaped out of mined rock specimens. 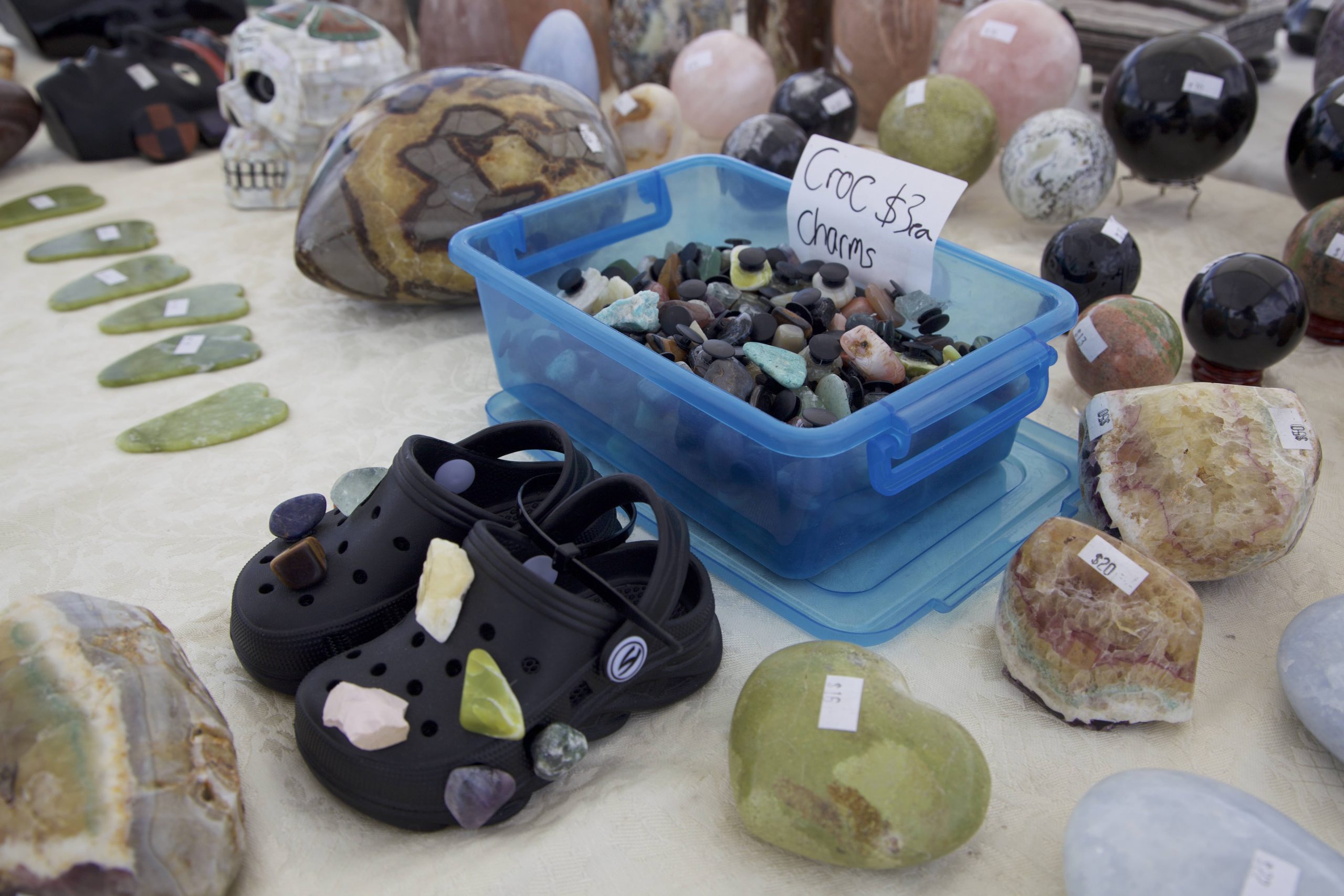 Nuñez, who was accompanying his father, uncle and brother at the event, grew up in the gem and mineral business, he said. His father, José, purchases rocks and minerals primarily from miners in Chihuahua and Durango, Mexico — areas rich in mineral deposits with many active mines.

Nuñez said he hopes to own a brick and mortar shop one day in town. He said his customers are often looking for gems and crystals with healing properties or that can remove bad energies. He assists customers with ease as they inquire after an adjustable obsidian ring, purchase a small handful of citrine from Brazil and ask if he knows where to source amethyst geode columns. He said he enjoys being a part of the family business and that it is connected to some positive, formative memories.

“When I used to go outside there always were rocks outside because my dad would buy them. I grew up with them, that’s why I like them. I can feel the energy sometimes, because you do feel the energy, and it makes me happy,” said Nuñez.

Tents away, Edgar Ruiz of Trini and Julie’s Mexican Gems and Minerals from Anthony, Texas, was in good spirits, happy to be back at the Alpine fair after the two-year, virus-induced hiatus. Ruiz’s annual income, similar to other vendors, is heavily reliant on the circuit of gem and mineral fairs that take place across the country. During the height of the pandemic, he said, they took to selling online to stay afloat.

Ruiz attends around 30 shows a year, traveling in his R.V. to save on hotel costs. Sporting a hat with his business’ name, he explains he’s been attending the Alpine Gem and Mineral Show since age seven. Now 31-years-old, his father, who started the business, has retired and Ruiz, one of six siblings, was the only one to take up his father’s path and continue to run Trini and Julie’s Mexican Gems and Minerals.

Rocks stacked and categorized by variety were available for wholesale at Ruiz’s booth, most originating from the mines of Durango, Chihuahua and Sonora, Mexico. Ruiz takes trips to Mexico to mine the rocks himself — paying fees to commercial and private mines and claiming harvests with the government. The Mexican government regulates the amount of minerals that can be mined. Ruiz travels south to Guerrero, Mexico, to mine rare firework obsidian. He said he is familiar with the area but many miners choose not to travel there due to the heavy presence of cartels. 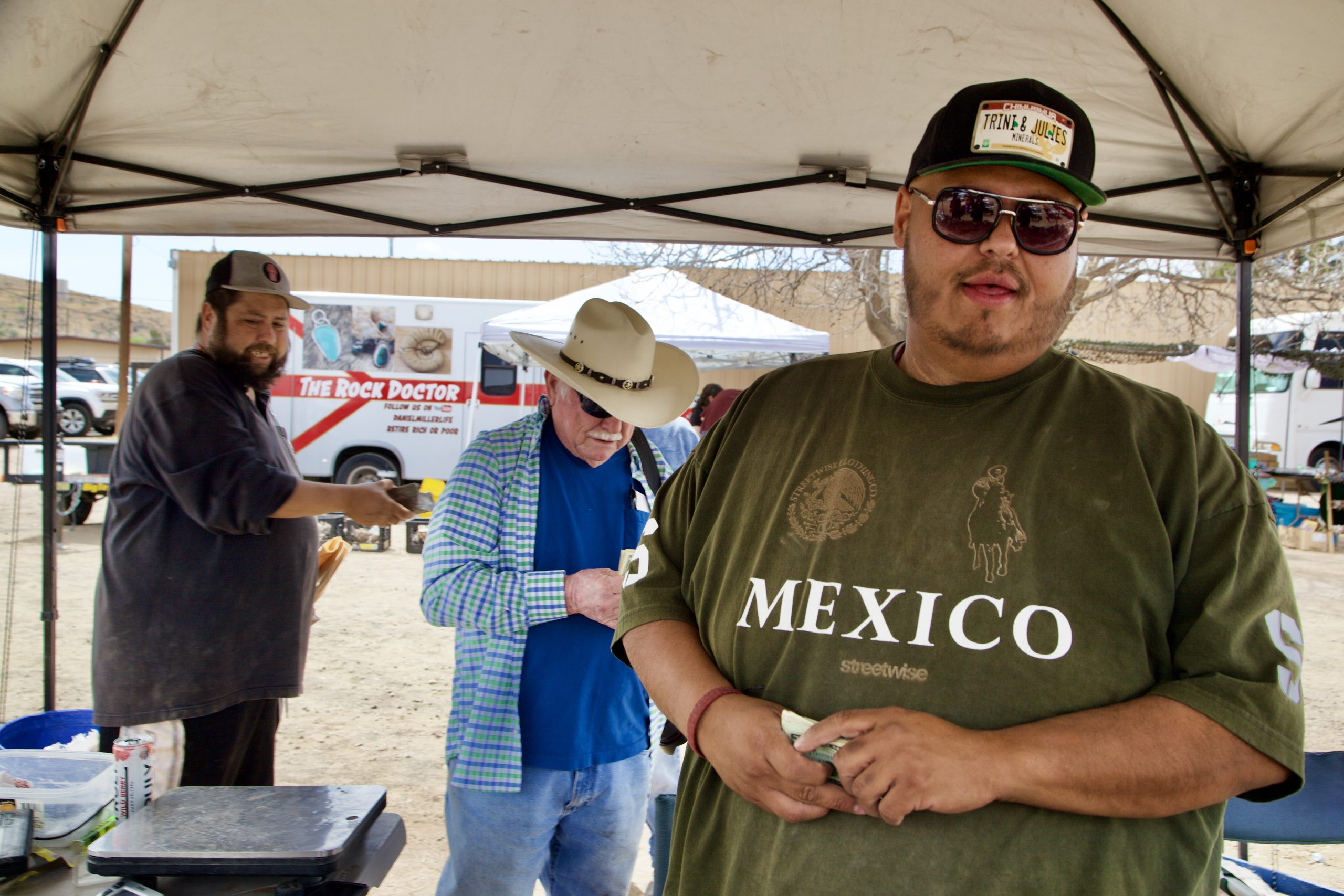 Ruiz will often ship his supplies of rocks and minerals to Juarez in order to avoid complications that come from traveling with them. Operating his business requires knowledge about everything from importing laws to metaphysical properties of the minerals, which younger crowds have more recently become engaged with.

“I think a certain percent of people have a genetic disposition towards appreciation [of rocks]. We just kind of naturally pick shiny things up and we value it,” said Graybeal. “I recognize it, I see it in little kids, their eyes get big and they get excited.”