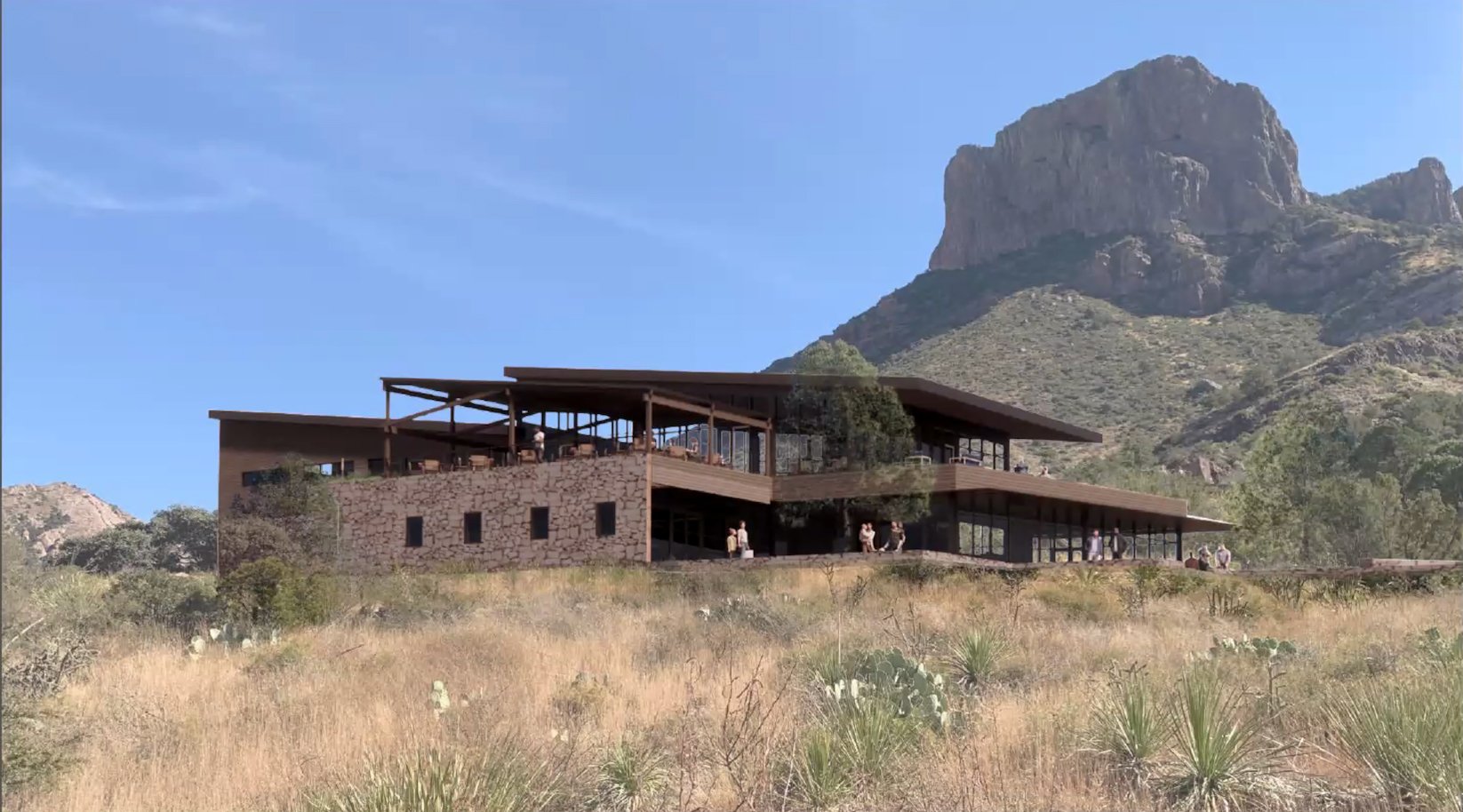 A conceptual design for an all-new Chisos Mountains Lodge at Big Bend National Park shows an exterior view of the structure, which would take up the same footprint as the current facility, with a view of Casa Grande Peak. Courtesy NPS / Architectural Resources Group.
Subscribe

BIG BEND NATIONAL PARK — Last week, officials from Big Bend National Park hosted a public virtual meeting to share a first look at the future of the 1964-built Chisos Mountains Lodge. While much is still up in the air, park officials shared in the meeting they were leaning toward constructing a new lodge, as opposed to renovating the existing structure.

The existing lodge is dilapidated in its old age, and public health officials have flagged it for safety concerns — but the required renovations would be so extensive and costly that replacing the structure altogether has turned out to be the more practical option. Plus, a replacement would give the park the opportunity to build a lodge better able to accommodate a growing number of visitors.

“We started off with the idea that if we can rehabilitate this, that is the preferred goal. It is a historic building. But that’s not really looking very positive,” said Park Superintendent Bob Krumenaker.

Big Bend National Park was awarded $77 million in 2020 from the passage of the Great American Outdoors Act, which allocates energy development revenue to national park infrastructure projects. The act was created to address growing deferred maintenance backlogs at national parks around the country. Of the total $77 million granted, the national park will allocate over $22 million to the new lodge and over $54 million to rehabilitate the park’s water systems.

Tom VandenBerg, chief of interpretation and visitor services for the national park, kicked off the meeting by introducing the project as well as its leads — Krumenaker and Debbie Cooper, principal from Architectural Resources Group — to a Zoom meeting room of over 100 curious attendees. Presenters discussed the history of the lodge, issues surrounding the current structure, proposed designs for a new lodge, and concluded with an audience Q&A.

The Chisos Mountains Lodge currently serves as a landing pad for visitors to the basin, complete with restaurant, gift shop, bathrooms, storage and concessionaire offices. While there is no actual lodging in the building, motel and cabin guests do check in and out of the facility. The adjacent motel units and visitor center are not a part of the lodge replacement project, but could be considered for a remodel in a later phase.

“Once we identify exactly what the scope of the funded elements of this project are, we’re going to step back a little bit and look at what else is needed in the basin,” said Krumenaker.

The lodge has been in structural decline for years as a result of being built upon unstable soils, and a significant increase in park visitation has rendered the facility inadequate, said park officials, who began seriously considering a renovation or replacement of the lodge a few years ago. Krumenaker said when the lodge was first built in the ‘60s the park was experiencing one sixth of its current visitation.

“There’s been continued movement throughout the building because the foundations weren’t designed correctly for the expansive clay soils that are below it. That has caused damage throughout the structure which has compromised its functionality,” said Cooper.

In the meeting, park officials shared that after gathering further data — including a floor level survey conducted by Cooper’s team which revealed almost 10 inches of variation in the building’s slab — they were ultimately advocating for an entirely new lodge. Cooper, whose team has been working with the park service on the project since 2018, said the current lodge would likely lose a lot of its character in the process of rehabilitation due to the complexity of repairs needed, and those fixes would be costly, making a rebuild the preferred option.

Cooper said numerous cracks have appeared in walls and ceilings, and there is a critical area in the lodge kitchen where the roof is having to be shored up by support frames. Even dining room walls which have retained their original framing are in poor condition despite being reglazed and would need to be replaced to meet current fire codes, she said. While the Chisos Mountains Lodge has continued to pass health inspections, Cooper said the U.S. Public Health Service has raised “significant concerns” and “strongly recommended a major renovation or replacement of the building.”

A U.S. Public Health Service employee assigned to serve as a consultant to the National Park Service noted in a 2019 report that the building “does not appear to be structurally sound” while recommending a replacement or renovation with structural stabilization, Krumenaker later clarified via email. Krumenaker stressed that the building is safe for use and not in danger of collapse, per the structural engineers that monitor it.

Project leaders said an entirely new building would not only resolve safety concerns but could also serve as an opportunity to improve and modernize the original building design which Cooper said is “not well-oriented to the visitor experience.” One of the goals of the new building would be to make visitor arrivals more centralized and less disorienting, as well as better hide unattractive building elements like the loading dock.

The new lodge would take up a similar footprint, said Krumenaker, in terms of size, energy and water usage. The current lodge was done in the Mission 66 style, so named for a 10-year program run by the park service to construct and improve visitor facilities across the country which ended in 1966. Krumenaker said the new build would aim to preserve key elements of the Mission 66 style, known for connecting indoor and outdoor spaces, while making much-needed improvements to the multi-functional space.

“We want to make sure that we somehow integrate the best parts of Mission 66 and also do a better job of harmonizing with the setting of the national park because this building was built for a very small fraction of the number of visitors that we have today,” said Krumenaker.

Krumenaker said a well-engineered, complex foundation will be paramount moving forward. In addition to increasing the efficiency of the building by moving storage around and potentially widening hallways, the new structure would have improved ADA accessibility and be wildfire resistant.

Cooper walked meeting attendees through preliminary architectural drawings for the lodge. The primary design includes a shed roof scheme with stucco and stone building materials in keeping with the overall look of the original building. A first-floor outdoor terrace with mountain views would act as a catchall for visitors, connecting to the visitor center, parking lot and adjacent trailheads, said Cooper, making pathways more purposeful. The basin’s camper store will be removed and incorporated into the lodge as well. The lodge will likely offer more grab and go meal options, and contain larger restrooms that would remain accessible when the building is closed. 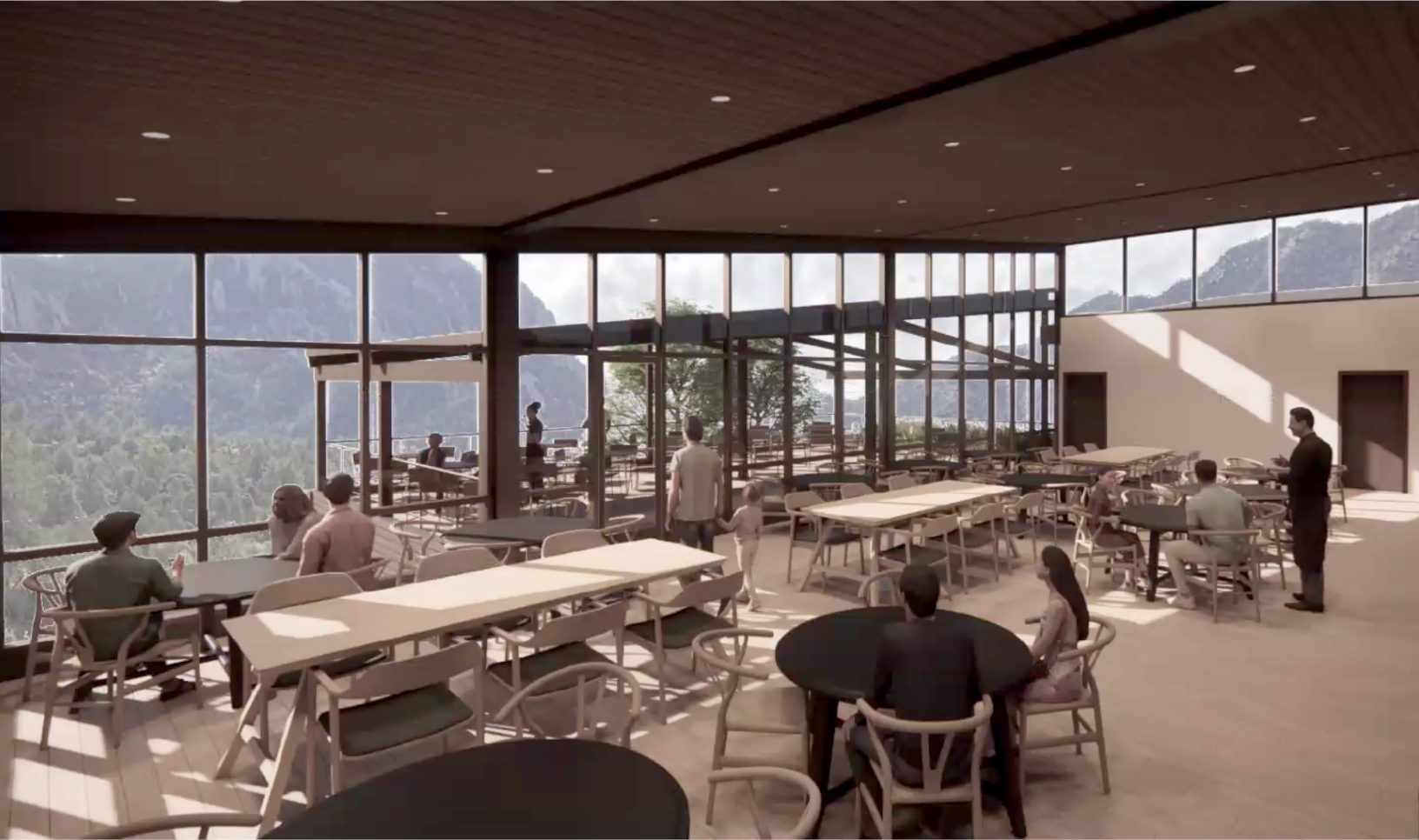 A conceptual design for a new second-floor dining room, with a view towards the Chisos Mountains. Courtesy NPS / Architectural Resources Group.

The new-and-improved lodge restaurant, located on the building’s second floor, would host 150 seats for indoor dining and 80 seats for outdoor dining. The building’s orientation toward the sun and the option of putting in solar panels are also being considered. Large glass windows will offer improved views of the surrounding landscape. Some meeting attendees raised concerns over large glass windows letting in too much heat, or posing a threat to the area’s bird population, to which presenters addressed and requested formal submissions of citizen feedback.

In order for Big Bend National Park to move forward with the development of the new lodge, there will be an extensive review process as the existing lodge is a historical structure. Krumenaker said Big Bend would work closely with the State Historic Preservation Office and the National Park service in order to meet requirements.

The target timeline for demolition of the old lodge is set for summer 2023, with the completion of the new lodge slated for sometime in 2025. According to the National Historic Preservation Act, because the lodge is a historic structure, the park service is required to consider public views before making any official project decisions. In addition to the public meeting, the park service will now solicit feedback from the public regarding the replacement of the Chisos Mountains Lodge.

Architectural Resources Group, Cooper’s company, will provide schematic designs as well as specifications for a design-build contract. The park will have to hire another firm to finish the designs and build the new lodge — Krumenaker said their current goal is to fast track that process. Bids will be nationally advertised, he said, and the park will utilize the same company to perform the park’s water system upgrades.

“We are spending a lot of energy trying to figure that out right now, obviously, there’s going to be major disruption, but to what degree? We don’t know yet,” said Krumenaker.

Some spoke up, inquiring as to whether current lodge employees would lose their jobs during the transition. Aramark, the private concessionaire company that the park contracts to operate food services and gas stations, would continue to operate other locations, said Krumenaker, and while some roles may change, he said, they are hoping to retain all employees.

The Chisos Mountains Lodge is one of the biggest contributors to Brewster County’s HOT (hotel occupancy tax) fund, bringing in the third largest contribution of taxes for the county, said Brewster County Tourism Council Executive Director Robert Alvarez in a comissioner’s court meeting this Tuesday. He said the county should be prepared for their HOT funds to be impacted for the duration of the basin’s lodging closures.

To submit comments regarding the Chisos Lodge replacement project to the National Park Service, email [email protected] by May 21, 2022. To view the Zoom meeting in full, visit https://www.nps.gov/bibe/learn/news/future-possibilities-of-the-chisos-mountains-lodge.htm