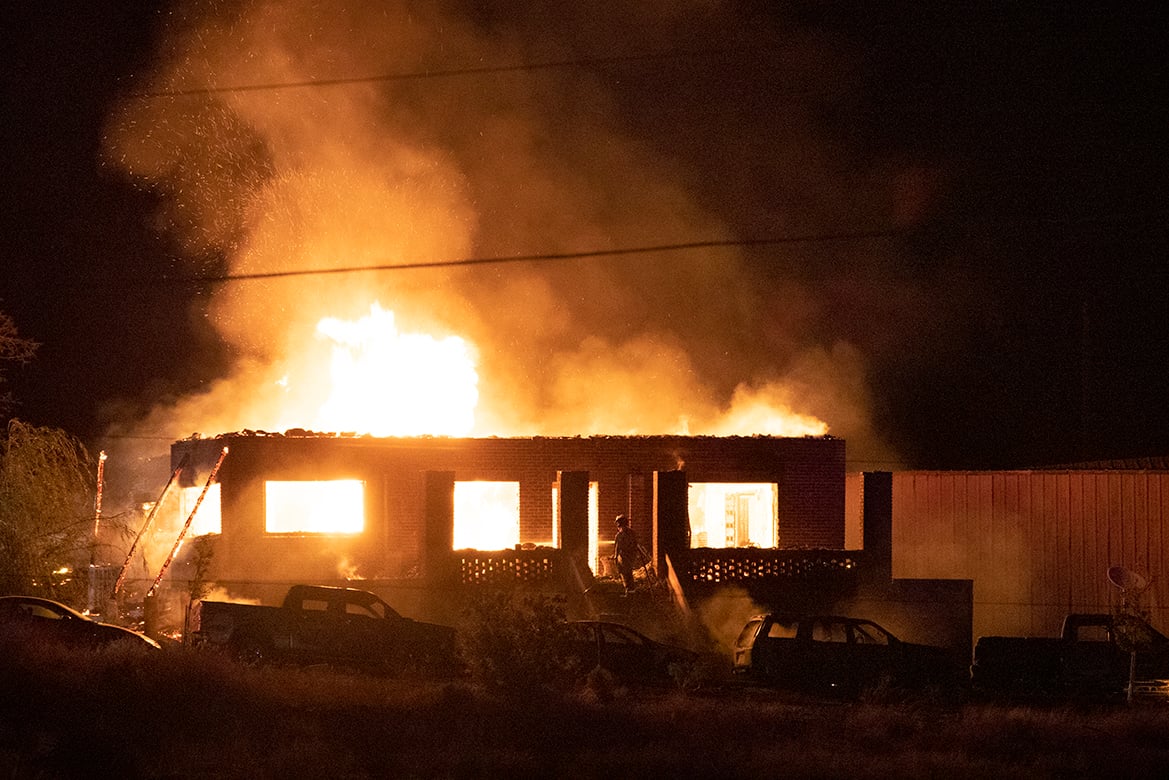 A house located on Church Road in Alpine was destroyed in a fire Saturday night. Staff photo by Maisie Crow.
Subscribe

ALPINE — On Saturday evening, an Alpine home was engulfed in flames, leaving the structure largely decimated while also torching over a dozen surrounding vehicles. The house’s inhabitants, a man and a woman, escaped unscathed, according to Brewster County Sheriff Ronny Dodson, but the fire did claim the life of a family dog.

Firefighters with the Alpine Volunteer Fire Department rushed to the scene of the fire — a large, fairly remote house on Church Road, neighboring Hillside Baptist Church and in the vicinity of Sul Ross State University — at around 7:30 p.m. to find the structure completely engulfed.

“There was nothing anybody could do to save it,” said Dodson, who was present at the scene. “Just keep it from spreading to the grass around.

Firefighters had managed to subdue the flames by around 11 p.m., said Alpine Fire Chief Andrew Pierce. “From there it was just mopping up hot spots and getting the cooling down, because all that debris was still super heated,” he said.

The jarring scene was compounded by “ammunition and vehicle explosions,” the fire department shared in a Facebook post.

“There was some ammunition left in the house,” confirmed Dodson, who said that ammunition “pops” in such conditions. There were also several oxygen bottles left in the home, presumably from a person’s previous illness, he said, to which he attributed the “major explosions” occurring as a result of the fire.

The man who lived in the house was an antique car collector, said Dodson, so the home was surrounded by his collection, plus the family’s vehicles for personal use  — approximately 14 to 15 cars were destroyed, while around three were spared. “His personal truck, it burned so bad you can’t even tell what kind of truck it was,” said Dodson. “It melted it.”

Witnesses gathered in the parking lot of the Holiday Inn Express & Suites along Highway 90, situated across the street from the home — the vantage point in the parking lot allowed a clear view as the house burned up on the hill. While those gathered watched the blaze from a safe distance, a fire truck with the Alpine Volunteer Fire Department pulled into the parking lot to retrieve water from a nearby fire hydrant — the nearest available water source, confirmed Dodson. The sheriff also noted that the County Road and Bridge Department provided a large tanker full of water — “One of our life savers,” he said.

Those gathered outside the Holiday Inn recalled seeing the fire start up at around 7 p.m., only to be completely engulfed within a half-hour. “The third story collapsed, then the second story — it all fell down fast,” said Moroni Vargas. Then there was an explosion, said Vargas — presumably from the oxygen tanks referenced by Dodson. Then, “All you hear was was kind of like fireworks popping off — that was all the ammunition they had inside the house.”

As of press time, the cause of the fire remains under investigation, per Dodson.