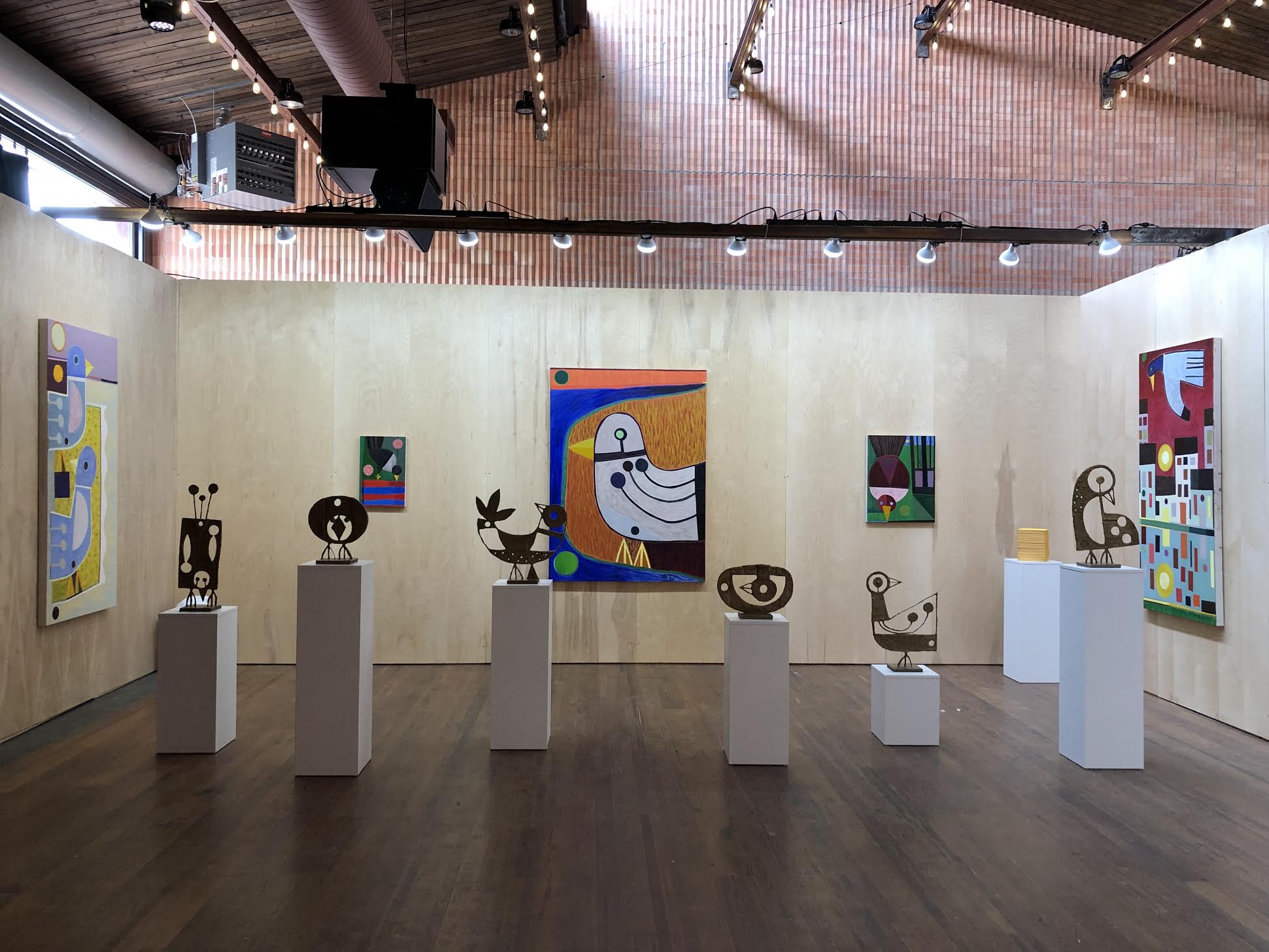 MARFA — The Marfa Invitational, a contemporary art fair which attracts art enthusiasts from across Texas, the nation, and the world to the remote arts destination of Marfa, will host its third annual event this weekend at venues across town.

The inaugural event took place in 2019, was canceled twice due to the coronavirus pandemic in 2020, and finally regrouped last year for its second annual gathering.

The art-filled weekend commences Thursday and lasts through Sunday. VIPs will have access to a multimedia performance by fashion designer Cynthia Rowley, musical performance by Louis Price, book talk with architecture firm Lake|Flato, and more. The hub of the event, Saint George Hall in downtown Marfa, will feature gallerists’ booths set up to showcase their artists, and will be open to the public. Open hours are 10 a.m. to 5 p.m. Friday and Saturday, and 10 a.m. to 1 p.m. Sunday.

This year’s participating galleries, many returning exhibitors, are from New York, Los Angeles, Palm Springs, Miami, Austin, Taos and more and include Nino Mier Gallery, Half Gallery, The Pit, Richard Heller Gallery, Bill Brady Gallery, Lora Reynolds Gallery, and others. First-time exhibitors include Carl Kostyál Gallery, based in London, and Baldwin Gallery, based in Aspen.

This year’s event involves a new component of outdoor sculptures, works collectively titled “Monuments,” by artists Ethan Cook, Charles Harlan, Ryan Schneider and Emma Stern, on view from 10 a.m. to noon Saturday at the future site of the Marfa Invitational Foundation, situated on the edge of Marfa on Hwy 90 and Golf Course Road.

Phelan announced in February of 2021 that Marfa Invitational was working on constructing a permanent space in town in order to host installations and performances year-round and extend their event space during annual fairs. Marfa Invitational is a nonprofit foundation and the space would act as the fair’s fulltime home. At the time, Phelan told The New York Times the site would be situated on five acres and would open fall of 2021.

Earlier this week, Phelan told The Big Bend Sentinel that the Marfa Invitational Foundation was hoping to receive building and construction materials in late summer or early fall 2022 and cited supply chain issues and the pandemic for the delay.

Marfa Invitational’s “VIP program,” in which attendees pay for an all-access pass to event goings-on such as private tours, artist talks and parties, is helping fund their new foundation space, said Phelan. Costs to enter into the event as a VIP range from $700 for out-of-town guests to a discounted $400 for tri-county residents.

Still in its early, formative years, the Marfa Invitational has received wide acclaim from the art world at large for its intimate VIP programming, swift art sales and locality in the high desert. As Phelan sees it, the four-day event aims to “provide context for the art exhibited and performed, while establishing a space and atmosphere conducive to viewing and experiencing art among the vast landscape and historical backdrop of Marfa.”

The event, which will host visitors from Paris, Berlin and Brussels, means big business for the town. Hotels and Airbnbs are fully booked and shops see an influx in sales for the year, said Abby Boyd, director of tourism for the City of Marfa.

“Marfa Invitational brings in a huge amount of visitors to Marfa. I’ve heard from some of our shop owners that their audience has made a big impact on sales in past years,” said Boyd. “Our hotels and short-term rentals are close to being sold out the weekend of the event, which is great for those businesses and the tourism department. Those HOT tax dollars will go into promoting Marfa as a whole.”

Putting on an art fair in the middle of the Chihuahuan Desert, where resources and skilled arts labor can be hard to come by, is no easy feat, said Phelan, who organizes all of the logistics of the event with the help of his wife Melissa Bent. The set up at Saint George Hall, which involves constructing booths and hanging fine art which is being shipped into Marfa from around the world, must take place within two short days, he said.

“Just days following each edition, I am back to work curating and organizing the next year’s edition,” said Phelan. “Each edition is a year in the making.”

marfa invitational
Stay in touch with The Sentinel
Related