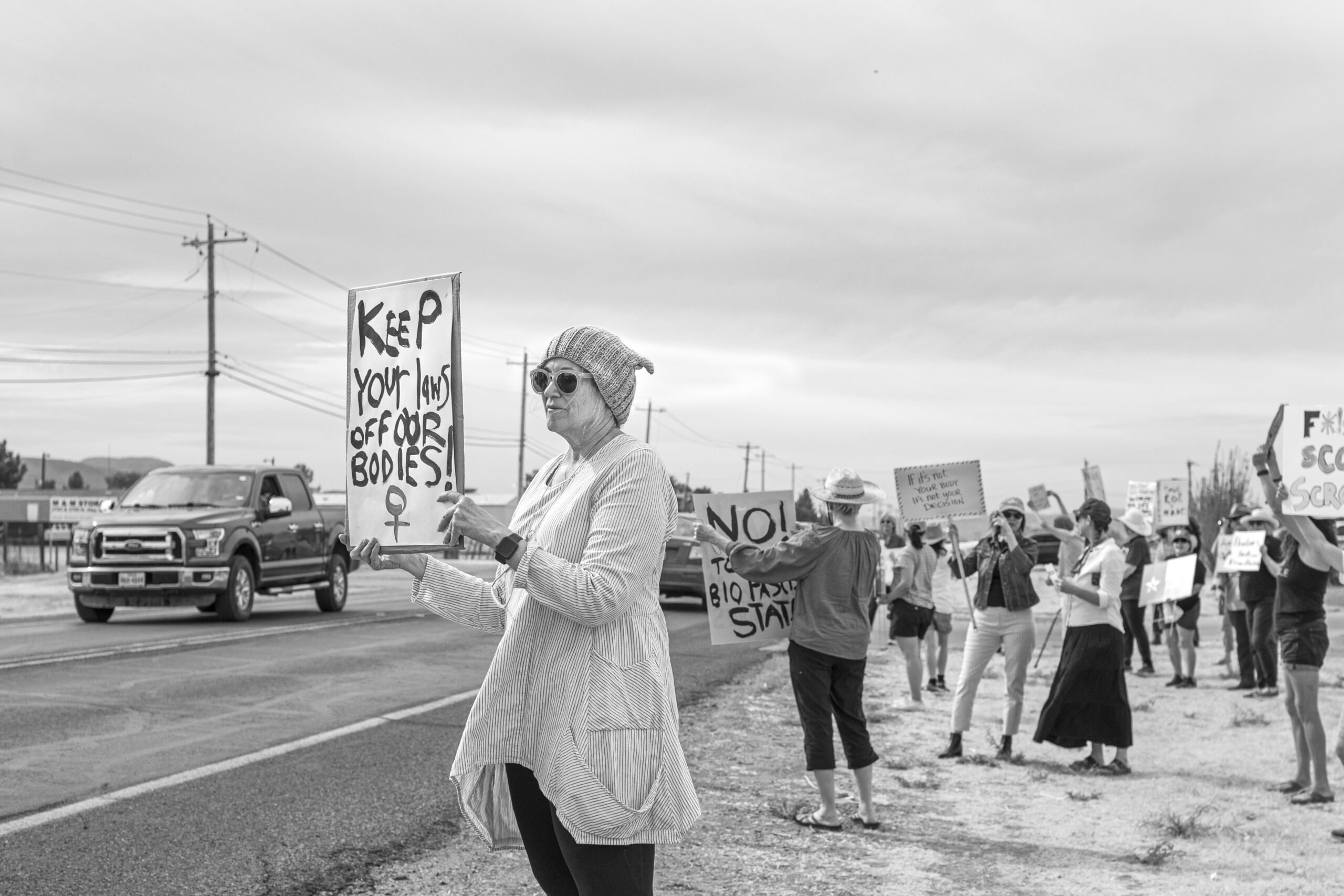 Staff photo by Maisie Crow. Annie Wilson of Alpine joined others from the tri-county area in front of the Texas Western District Court in Alpine to protest a draft abortion ruling that was leaked from the Supreme Court of the United States on Monday evening. The draft shows the court overturning Roe v. Wade.
Subscribe

ALPINE — On Monday night, Politico reported that the Supreme Court had voted to strike down Roe v. Wade, the landmark 1973 decision guaranteeing constitutional protections for the right to abortion, citing a draft majority opinion leaked to the news site. By Tuesday evening, rallies for abortion rights had sprung up around the country, as the Women’s March organization urged pro-choice protesters to gather outside their federal courthouses.

Brewster County swiftly heeded the call. Alpine resident Erica David had created an event on Facebook titled “Defend Reproductive Rights” early Tuesday morning — angry citizens would come together for a “peaceful gathering” protesting the leaked decision at 5 p.m., the local time slated for every other rally across the nation. That day, outside Alpine’s federal courthouse, David held up a sign that read “Never again,” skewered with a wire hanger and dripping in red paint.

“I was in such a rage, I couldn’t do anything else,” she said of the whirlwind organizing. “And I saw that it was happening across the country at federal courthouses — which we have one, with a parking lot, owned by the people. I figured I would just come here, and tell everybody to come here.”

Last year, Texas passed a “trigger law” that will go into effect 30 days after the overturning of Roe v. Wade, which would make performing abortion a second-degree felony. Texas Lieutenant Governor Dan Patrick released a statement celebrating that anticipated outcome. “If the leaked draft is indeed accurate, it is a great day for innocent babies in the womb,” he said. “They will finally be safe in Texas and other Republican states. Prayerfully, in time, all states will protect them.”

Over 30 participants of all ages showed up at Tuesday’s rally, from Alpine and from neighboring Marfa. Drivers in passing cars honked to show their support, eliciting cheers from the small but impassioned crowd, which had been drawn to the courthouse by Facebook and word of mouth. Mollie Durkin, who lives in Alpine and works in Marfa, said David had texted her that morning, and she had gone on to invite others. “I texted a big group of Alpinians and Marfinians that would come out and show their support,” she said. She then went to David’s house to make signs — hers read “Reproductive justice is a class war.”

“I see this as such a class war,” Durkin explained. “Rich white women are going to be able to fly out and get their abortions. This is going to affect more impoverished women who can’t pack up and leave the state.”

Some of those gathered remembered when Roe v. Wade came down from the Supreme Court. Annie Wilson, now 64, was 14 at the time — she found it shocking to witness such a reversal in her lifetime. “It’s like going backwards,” she said.

She also was not surprised that the rally was entirely free of counter-protesters — folks in Alpine tend to abide by a “live and let live” philosophy, she said.

A few women at the rally had traveled farther than Presidio County. Nancy Thompson, founder of the PAC Mothers Against Greg Abbott, had come to the Big Bend region from Austin, in pursuit of a vacation with her two friends. When she heard the news Monday night, she resolved to grab her signs and head to the nearest federal courthouse.

“We were going on a girl’s trip to get away, because I needed to relax,” she said. “It kind of didn’t work out.”

Thompson founded Mothers Against Greg Abbott (“MAGA the good,” joked Thompson) in August of last year, after Abbott had banned mask mandates. Her youngest son was very sick at the time with a non-COVID virus that she feared had weakened his immune system, and she was terrified to send him to school. She made a handmade sign and posted up alone outside the Texas capitol building for three hours — her one-woman protest got over a thousand likes and hundreds of shares on Twitter.

Since then, her organization has taken on more causes. In September, when Texas’ six-week abortion ban went into effect, the group’s “membership really exploded,” Thompson recalled, and it took off from there. “I have always been a ‘mind your own damn business’ kind of person,” she said. “Even though I’m a Catholic and I had a baby at age 43, I would never impose my beliefs on anyone. I think everybody should make their own personal choices for what’s best for their family.”