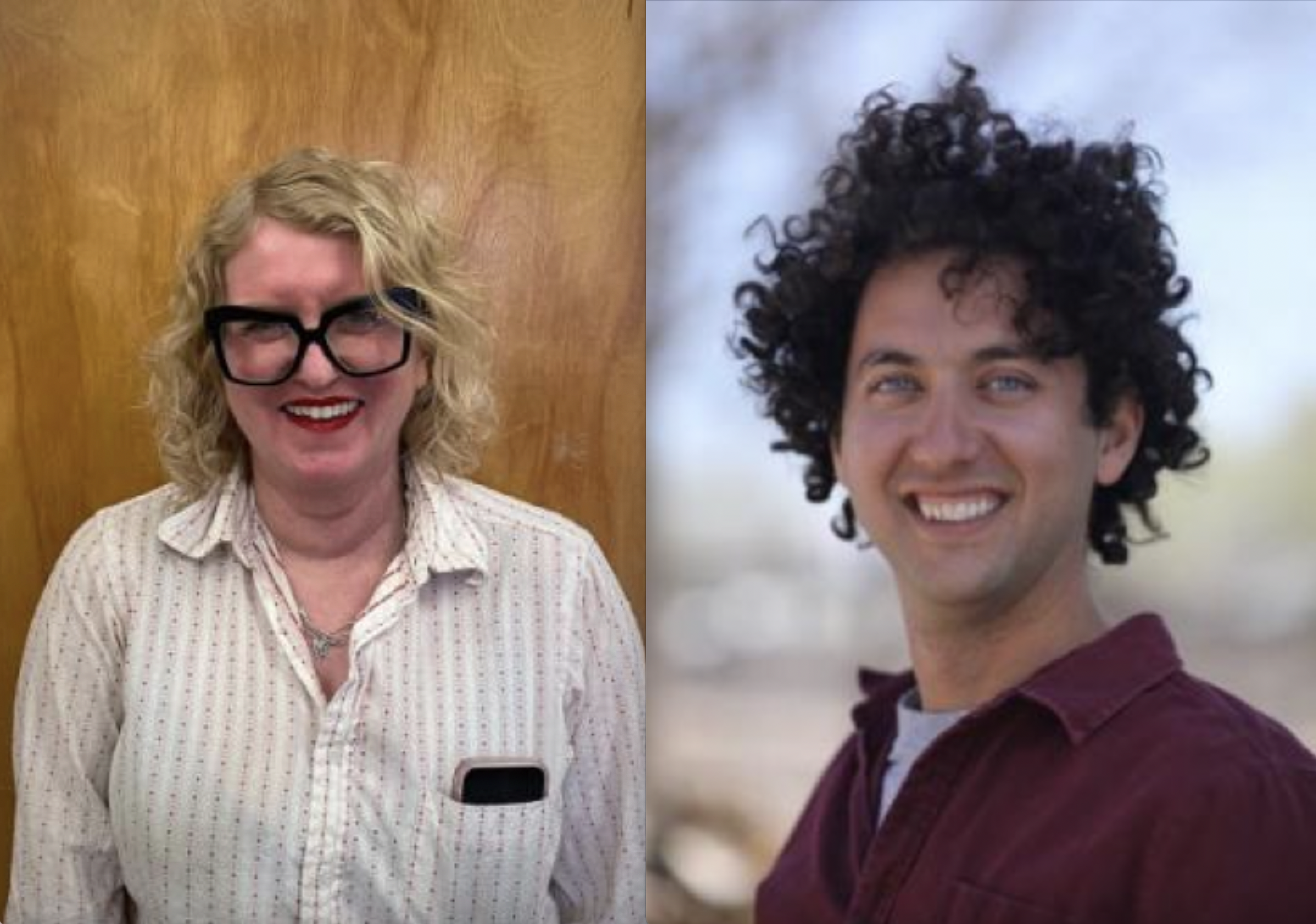 Councilmembers Buck Johnston and Yoseff Ben-Yehuda participate in their final city council meeting this week as their terms expired this May. Both promised to stay involved serving the community in some capacity. Photos courtesy City of Marfa.
Subscribe

All council members were present at Tuesday night’s meeting, and a few sported purple polos with white “City of Marfa” logos for the occasion. After a swift approval of a new proposed logo for the Marfa Library, City Manager Mandy Roane brought up Marfa Activity Center pool operations, including price breakdown for admission and age limits.

“We know the pool is not like a huge moneymaker. We’re not trying to do that. We’re trying to make it really affordable,” said Roane.

The pool, which has been closed to the public since May 2020, is set to open for the summer season on May 31 and stay open until August 6.

Pending adequate staffing, the facility will be open to the public five days a week from Tuesday through Saturday and will be available to rent for private parties on Sundays. Sunday rentals will run $150. The city is not yet taking reservations for private pool parties. The city is working on hiring lifeguards and a pool supervisor — applications can be found on the city’s website.

Councilmember Johnston insisted lap swim and aerobics timeslots don’t overlap on the daily schedule and Roane proposed a tentative daily schedule of lap swim from 10 to 11 a.m., water aerobics from 11 a.m. to noon, closed for lunch from noon to 1p.m., and open swim for the reminder of open hours from 1 to 6 p.m.

Later, in her city manager’s report, Roane said the pool bathrooms are currently being cleaned up, and toilets and sinks were being repaired by the public works department.

Council voted to keep the age limit for unaccompanied children at age 8 or older, with council members Johnston and Eddie Pallarez voting nay.

Next up was an agenda item to approve a request for proposals (RFP) for a water and wastewater rate study, which the city budgeted $20,000 for in the last budget cycle. Roane said rates hadn’t changed since 2015 and the study would provide them with a five year plan, which would be helpful to have in hand when going through the next budget cycle.

“It’s definitely time for us to update it and I think having the study will make it a little bit easier. We can justify the changes that are being made and we can understand a little bit better what we should be charging,” said Roane.

Council voted unanimously to approve the RFP for the water and wastewater rate study. Trey Gerfers, Parks and Recreation Board president as well as board chairman for the Presidio County Water Conservation District, then joined council members to discuss a variety of updates on federal and state funds available for the city’s and county’s future water infrastructure projects.

Gerfers said with a recent influx of money from the federal government from the bi-partisan infrastructure law, which allocated $50 billion in funds to the Environmental Protection Agency for water and wastewater infrastructure funding, the city was well-poised to receive money for their laundry list of projects. That money will be administered by the state revolving funds run by the Texas Water Development Board, said Gerfers, and because Presidio County is traditionally underserved, it may receive more backing from the federal and state government for the next five year funding cycle.

“They are really desperate at the national level to have to make quick points and they want to be able to point to a community that’s working together — county, all entities. They love that we’re rural, remote, underserved, the whole thing. And so just all these stars are aligning.”

Fort D.A. Russell and East Heights neighborhood were among the projects on the city’s water infrastructure wishlist to be funded with the received funds.

Gerfers said state revolving funds that are administered are often forgivable loans from 75% or more. He has been working with a variety of groups on an ongoing basis, including the Environmental Defense Fund, Water Finance Exchange, as well as other grant writers and consultants, and has submitted funding requests to the Economically Distressed Areas Program (EDAP).

Next steps were to set up a local steering committee, headed by Gerfers and consisting of six to eight other representatives from around the county. The steering committee will work together to achieve accountability and transparency, said Gerfers, and would set priorities for water infrastructure projects, work through issues, and budget before money is granted.

Their proposals are currently being reviewed by the TWDB. They will likely be invited back in August to further discuss the funding and process and could receive funds as early as November, said Gerfers. He said he would continue to check in with the council in the coming months.

He wrapped up his presentation by suggesting to council that the forthcoming water infrastructure projects and hopeful funding influx could also act as an opportunity to plan for the direction of the city’s growth, which is sure to come, he said.

“If the city can guide the growth, you grow your tax base, you grow your rate base, and you avoid those sorts of headaches down the line where you’ve got all these wells drilled and all this septic failing, so it’s something for you guys to think about,” said Gerfers.

Council moved on to the next agenda item regarding the Marfa Farmstand location. There was confusion amongst council members and citizens present at the meeting for this specific agenda item as to whether or not council was supposed to be discussing the renewal of a previous agreement which allows the farmstand to utilize the USO pavilion for their Saturday morning markets, or whether council was deciding on the farmstand’s new proposed move to the Marfa Public Library courtyard.

Farmstand organizers including Mainda Beeman and Bob Schwab were present for the meeting, as were library representatives. Schwab wanted to be clear that the idea to move the farmstand to the library courtyard came from library staff, not the farmstand. He said library staff thought the event could provide good exposure for the library and there was an opportunity for joint programming.

“It was a library staff who said ‘We see some opportunity for some great collaboration here.’ It’s more visible, it might allow us to enhance some Saturday programming, and a lot of kids come to the market,” said Schwab.

Marfa Library’s board of advisors, which Schwab also serves on, unanimously approved the concept, he said, after thinking about the move a great deal and assessing logistics like parking. But a current rule prohibiting commercial activity in the space, which can be waived by the current librarian for exceptions, led the farmstand to put the decision in front of the council, said Schwab.

“Given that particular rule, [we thought] it might be best to come before council to have that endorsed by the council or agreed to by the council, as opposed to letting just the library make the decision,” said Schwab.

But because the wording of the agenda item was about renewing the USO agreement, council was unable to act on a proposal to move the location to the library, but will include an item to discuss the farmstand’s use of the library courtyard on their next agenda for a meeting in late May.

In the meantime, council authorized the continued use of the USO pavilion for the farmstand while the library site agreement gets worked out. The primary issue with the USO space is the fact that it can be rented out on short notice, thus displacing the market. Meeting attendees were only aware of that issue occurring once before. Schwab said they were eager to provide the market to the community and were already behind schedule for this year.

“We’ve already started about a month ago, typically, and so we delayed this. We were hoping this would be on a prior agenda. It’s been delayed to this day. So the market is getting a very late start this year,” said Schwab.

After canvassing the local special election in which the reauthorization of the quarter-cent sales tax for street improvement projects passed, Roane and Police Chief Steve Marquez gave their reports. Roane reported to council that city staff was working with EMS Director Bert Leggarde to host Stop The Bleed training and Chief Marquez reported new police fleet vehicles would be in soon. He also said the police department is experiencing increased call volumes and is still seeking one more officer.

Ben-Yehuda said he joined the council to learn about the city’s innerworkings and will walk away with much more than that. He said he plans to stay involved with the volunteer fire department and the Presidio County Appraisal District Board.

“I really appreciated working with all of you, the [city] staff. It’s totally bittersweet,” said Ben-Yehuda.

Through teary eyes, Councilmember Johnston thanked city staff members, recalled challenges brought on by the COVID-19 pandemic, and promised to stay in the loop, assisting with grants and more.

“It’s been really rewarding. I mean, it’s been hard. And I’ve learned so much about the community, and about myself,” said Johnston.

Councilmember Pallarez, making a fisherman reel in motion, said he’d continue to work with Ben-Yehuda on the Marfa and Presidio County Museum, and encouraged Johnston to stay on with the MAC pool project. Councilmember Raul Lara said Ben-Yehuda and Johnston helped make up the best city council they’ve had in years, despite not always agreeing on everything.

“But that’s what the whole thing is about — why do you want a council that’s going to agree on everything?” said Mayor Pro Tem Irma Salgado, to which all agreed.

“I want to thank Councilmember Johnston and Councilmember Ben-Yehuda for serving the city of Marfa. I know it’s a thankless position,” said Mayor Manny Baeza. “We argue at times, but what I love is that we see the world through each other’s differences and viewpoints. It’s been an honor to work with both of y’all. And I wish you all luck.”

The meeting concluded with farewell handshakes and hugs all around.

marfa city council
Stay in touch with The Sentinel
Related