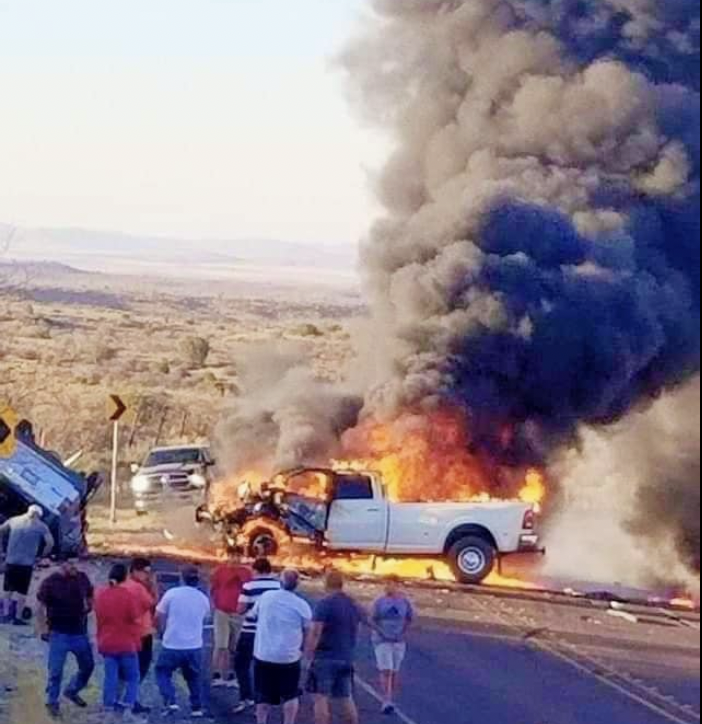 MARFA — A Chihuahua man died in a car crash on U.S. Highway 67 while traveling south between Marfa and Presidio when a north-traveling car veered into the southbound lane, hitting the man’s car head-on and causing it to flip. The two occupants of the other vehicle sustained serious injuries but survived, while their car erupted in flames.

Mario Rodríguez, 62, was killed in the collision that took place approximately 18 miles south of Marfa on Sunday evening, around 7:28 p.m., according to the Texas Department of Public Safety. A preliminary report from the department indicates that Rodríguez had been driving south towards Presidio at milepost 952, where the speed limit is 70 miles per hour, when a northbound Dodge 3500 pickup truck veered into his lane, hitting him head-on.

A DPS spokesperson said the collision was still under investigation, and the department could not say why the northbound driver had veered into the southbound lane.

Rodríguez’s son, Daniel Rodríguez Contreras, told The Big Bend Sentinel that he and his brother had been driving ahead of their father along the corridor towards Presidio, which was a normal route for them to travel as a family — the Estación Consuelo residents would often drive along the highway to visit family in the United States, he said.

On Sunday, the brothers were driving ahead of their father’s Ford Aerostar passenger van when their father could no longer be seen trailing behind them. “He was following us,” recalled Contreras in Spanish. “My brother no longer saw him and looked back and that was when he saw the accident.”

That Sunday was Mother’s Day, and Rodríguez had traveled into the United States to retrieve gifts and visit family, said Contreras. His car had been loaded up with gifts to bring back to Mexico for a Mother’s Day celebration. “He was going to throw a party for all his children, his mother and his relatives who are mothers, and he brought in his truck many gifts that he had bought at Walmart and other stores for all the moms,” said Contreras. “All of that stayed [in the truck].”

Contreras said his father had been a devoted husband, parent and grandparent. “My father was a humble, simple, hard-working man who never got into trouble with anyone,” he said. “He always worked to give the best to his three children and his wife, and his grandchildren.”

The surviving driver and passenger of the other car involved were transported to Big Bend Regional Medical Center, said Marfa Fire Chief Gary Mitschke, who had been at the scene. That car’s passenger was subsequently airlifted to El Paso for surgery, according to a GoFundMe raising money for his medical expenses. The organizer of the Gofundme did not return a request for comment by press time, and the driver of the car could not be reached by press time.

Mitschke said he spoke to one of the car occupants upon arrival, who was on the ground and indicated he felt pain in his abdomen. The other occupant was farther away and receiving treatment from EMS, who were arriving on the scene. “They were far enough away from the burning vehicle where I felt they were safe,” said Mitschke.

The car fire on the highway spread to grass on the roadside, said Mitschke, creating a brush fire. “We actually had two fires to deal with,” he said. “I had the rescue truck work on the vehicle and then a brush truck start working on the brush fire that was next to the road there — that was our biggest concern, and also to make sure everybody was safe and well away from there, because a burning vehicle can still blow up.”

Contreras stressed that he and his family have no desire to file charges over the accident — they are merely hoping that the expense of transporting his father’s body from Alpine back to Mexico can be covered. “We don’t want to file charges against the other person because we know it was an accident,” he said. “We don’t hate him or want revenge against him because he caused death.”

Mitschke said U.S. Highway 67 is a “tough highway to travel,” noting it can be dangerous due to the high volume of traffic and the speed at which cars often travel on it. “There’s a lot of places that you just need to slow down, and I will tell you for a fact that, I think the speed limit is 70, [but] people go 80 or 85, and they will pass in no passing zones,” said Mitschke.

With an eye towards safety improvements, the Texas Department of Transportation recently added additional passing lanes to the route after conducting a years-long study of the corridor. Per a department spokesperson, passing lanes were added between mileposts 966 and 968, near Cibolo Creek Ranch Airstrip, as a result of the study.