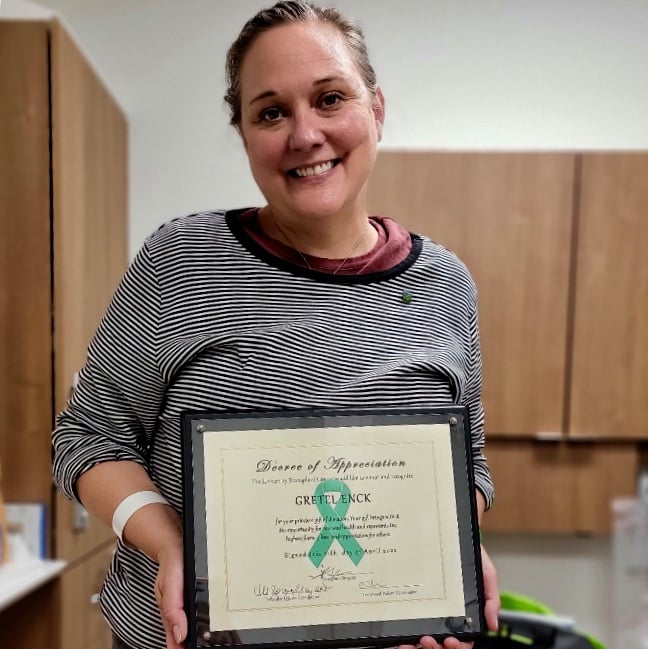 MARFA — Local resident Gretel Enck is back at home in recovery after undergoing successful kidney donation surgery, in which she gifted the organ to a stranger she has yet to meet.

Before traveling to the University of Texas San Antonio Transplant Center for the procedure, Enck, who had long prepared to be a kidney donor, said the news of an official surgery date was initially a bit of a shock.

“After my nurse contacted me in March with a date, I had a day of ‘Oh crap, what am I doing? Who thought this was a good idea? Ahh!’ And it went away,” said Enck.

Enck had never had surgery, but was surprised at how easy the whole process was, she said. She was inspired to donate a kidney by her friend Allison Scott, who had also undergone the procedure, and through reconnecting with someone from her past — an old boyfriend who had donated a kidney to his sister, prolonging her life by three years.

“Before surgery, I thought, ‘I want this person to get 30 years out of my kidney. But if all they get is three years, that’s better than nothing.’ Honestly, really, what I want for them is to know that they are loved enough in this world that somebody did this for them,” said Enck.

Kidney disease affects around 37 million people in the U.S., or 1 in 7 adults, and is a leading cause of death in the country, according to the National Kidney Foundation. People suffering from kidney disease who receive donations from living, versus deceased, donors have better long-term results, according to the University of Pittsburgh Medical Center.

After speaking with her family and meeting with doctors who ran a number of tests, she discovered she was a viable candidate for kidney transplantation. Enck is classified as an “altruistic donor,” and was eventually paired with a recipient that was a good match. Through meetings with a psychiatrist, social workers, surgeons, nurses and nutritionists, Enck felt well-prepared for the surgical procedure and had a lot of time to consider her motivations, she said.

“When you go to do all the medical testing, everybody you see asks you ‘Are you sure you want to do this?’ So you have lots of time to think about, like, why am I doing this? Why do I want to do this?” said Enck.

Part of her motivation for the donation was to help create the world she wants to occupy, she said.

The politics of the time, with the threat of Roe v. Wade being reversed, was weighing on Enck’s mind as well.

“[Women’s] bodies are capable of amazing things,” said Enck. “I happen to have this healthy kidney that I didn’t need, and my body could pass that on. It’s just kind of remarkable.”

Enck said she is excited to meet the recipient of her kidney in a few months. Because Enck is a federal employee, working as an administrator for the Fort Davis National Historic Site, she received 30 days paid leave for the organ donation. Her travel expenses were paid as were all the costs of surgery.

From her sister and brother-in-law flying in from Virginia to act as her caretakers, to people covering her hours at the Blackwell School — where she is the president of the Blackwell School Alliance and volunteers time to keep the museum open — Enck said she has felt the support of the community. Library books, her cats, and plates of food from community members are aiding in her recovery, too, she said.

“It takes a village to donate a kidney,” said Enck. “I could not have done it without lots of people’s support.”