PRESIDIO COUNTY — Pinto Canyon Road was well-traveled Sunday morning, as tri-county residents and visitors ventured past roaming horses and scenic mountain views 40 miles south of Marfa to Judd Foundation’s Casa Perez property for an annual “Ranch Day,” which was back after a two-year interruption due to the pandemic.

Around 140 people turned out for the event, which included an educational talk on efforts to reintroduce populations of native bighorn sheep in West Texas bookended by self-guided tours of the Casa Perez ranch home, catering by Convenience West and live music by Primo y Beebe.

Casa Perez is the most accessible of the three properties on Judd’s Ayala de Chinati ranch, which also includes two other homesteads, Casa Morales and Las Casas. During his lifetime, Judd continually acquired land in southern Presidio County in order to preserve it and prevent future development. At the time of his death, he maintained a total of 40,000 undeveloped acres. 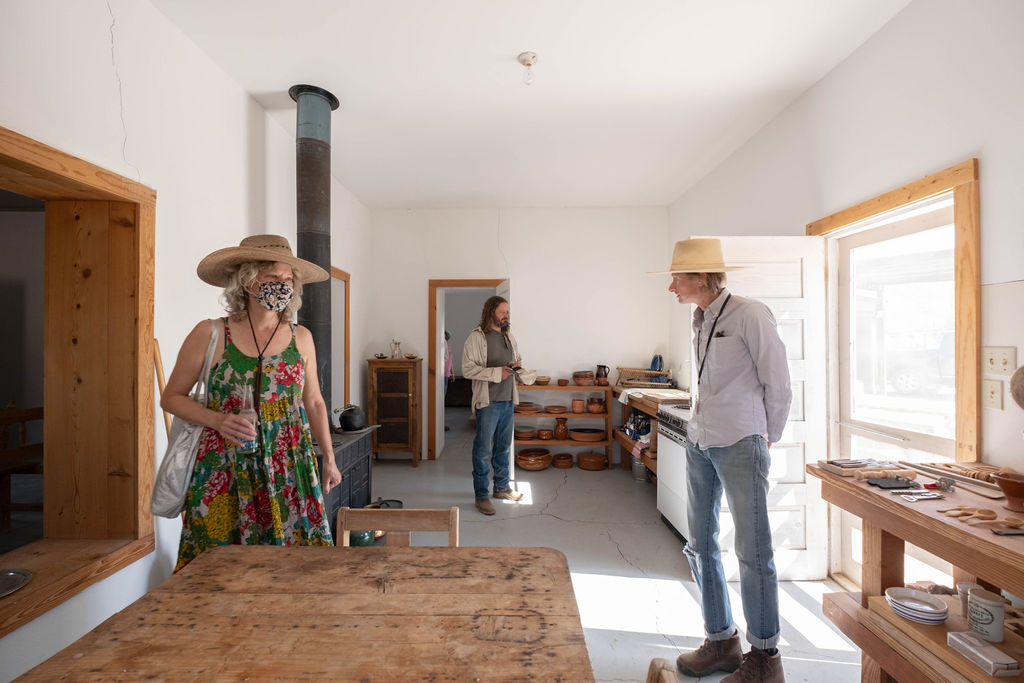 So named for the Perez family, which operated a goat farm on the land as early as the 1940s, Casa Perez is a four-room adobe structure originally built in 1910. Purchased by Judd in 1983, today the home features a kitchen with Mexican dishware and furniture, two works by Judd in aluminum and acrylic, a Francisco Goya etching, Judd-designed pine bed frames and more.

Backing the main home are additional, small storage and bathhouse structures Judd constructed as well as a water tank with sunning platforms at the base of a windmill.

Judd-designed benches and tables sit beneath two long pergolas, also of the artist’s making, which Ranch Day attendees gathered beneath for shade as event organizers introduced the morning’s speakers on the home’s front porch.

Rainer Judd, president of the Judd Foundation and daughter of Donald Judd, sat cross legged holding a microphone and welcomed attendees to the seventh annual event. Lizards scurried in the dirt and red dragon flies and wasps hummed.

“We are so happy to be back at Ranch Day,” said Judd. Acknowledging the gathering point, Judd emphasized the biological diversity of the Chinati Mountains and the need for greater ecological studies in the Chihuahuan Desert. 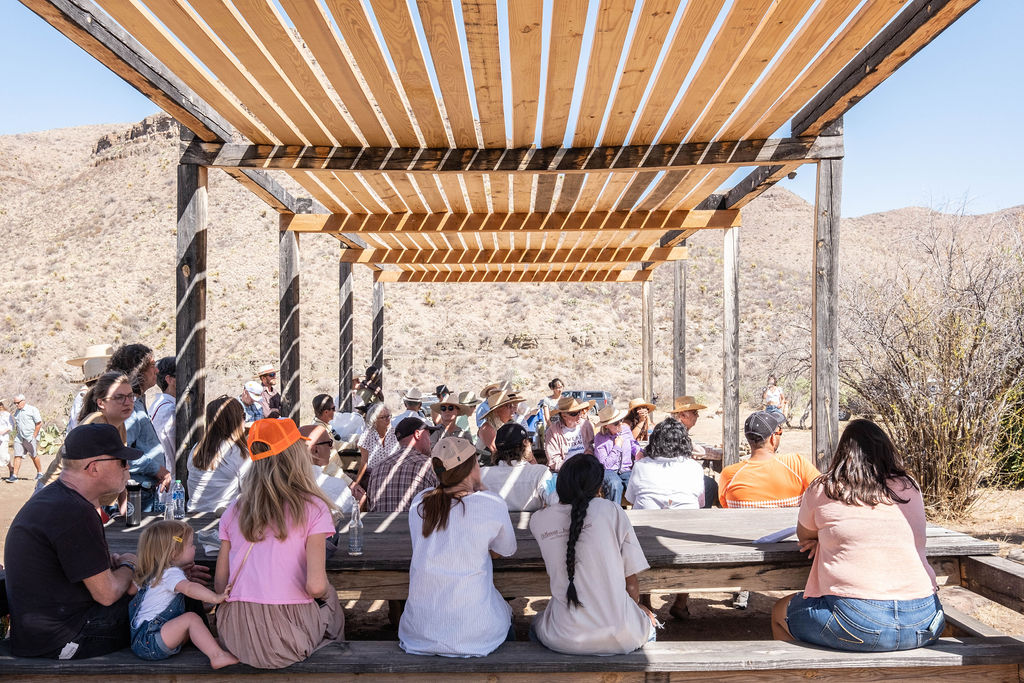 “We’ve all got something to do to contribute to keeping this beautiful land healthy and happy,” said Judd as she passed off the microphone to Froylan Hernandez, Desert Bighorn Sheep Program Leader at Texas Parks and Wildlife, who was first up to speak.

Hernandez began by discussing the history and demise of the Trans Pecos bighorn sheep — which were extinct in their native mountain ranges by the 1960s due to disease spread from domestic livestock, increased resource competition from domestic livestock and aoudad and unregulated hunting. He reported on the status of TPWD’s restoration and translocation efforts, stating bighorn sheep population levels were now similar to that of the 1800s. TPWD estimates 1,500 bighorn sheep were populating the region as of 2018, according to their website.

Of their most recent developments, Hernandez said TPWD had recently observed a herd of 18 to 20 bighorns which had migrated from Nine Point Mesa Ranch to the Christmas Mountains, a promising sign, and TPWD is working to secure funding in order to further assist Mexico with increasing their bighorn sheep populations.

After a brief audience Q&A, Carlos “Lalo” Gonzalez, Professor of Habitat Research and Management at the Borderlands Research Institute at Sul Ross State University, took the floor to go over current and future research projects, including efforts to collar sheep and study resource competition between aoudad and bighorn. He said aoudad can breed up to 10 times faster than native bighorn and while it is not feasible to fully eradicate them, efforts to control the population are key in aiding the bighorn sheep’s survival.

Hernandez took back the mic to conclude the informal talk, impressing upon listeners how aoudad grazing also leads to devastating effects on the environment. Acknowledging that TPWD introduced the aoudad to the area in the first place, he said their ongoing efforts to curtail the spread of aoudad through aerial shootings “weren’t pretty,” but were necessary.

“We are in charge of protecting our habitat and our native species, in that order,” said Hernandez. 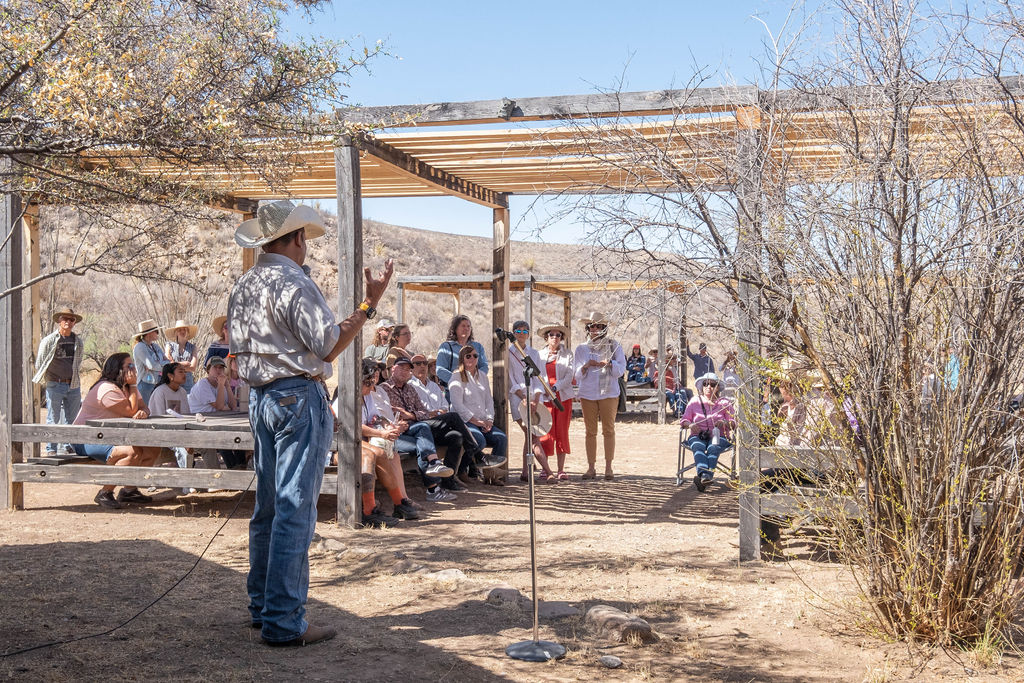 When the talk wound down, Caitlin Murray, Director of Archives and Programs at Judd Foundation, thanked the speakers and encouraged everyone to line up for free barbecue, red enchiladas and kale salad as Primo y Beebe geared up for their musical set. Guests followed suit, grabbing ice cold water bottles from a stock tank-turned-cooler.

In an interview with the Big Bend Sentinel, Murray said a version of Ranch Day has been a tradition since the 1990s and a number of years back was expanded to offer an educational talk in addition to the staples of music and food. Since then, Ranch Day has hosted a variety of historians, biologists and geologists from the region.

“We have such an incredible wealth of amazing people in our region who have a deep knowledge of the Chinati Mountains and of West Texas, in general,” said Murray.

Ranch Day also offers the public a further glimpse into Donald Judd’s extensive interests and dedication to fields other than art and architecture, said Murray.

“We know at Judd Foundation that this land, the understanding of this land and previous cultures was so important for Donald Judd, was something he read about, something he was engaged in and that’s a tradition that we maintain,” said Murray.

As Judd Foundation pursues its mission to manage the ranch homes and land, talks have tended to be more ecologically-focused as of late, said Murray, who hopes the event also informs newcomers with less institutional knowledge of the area. 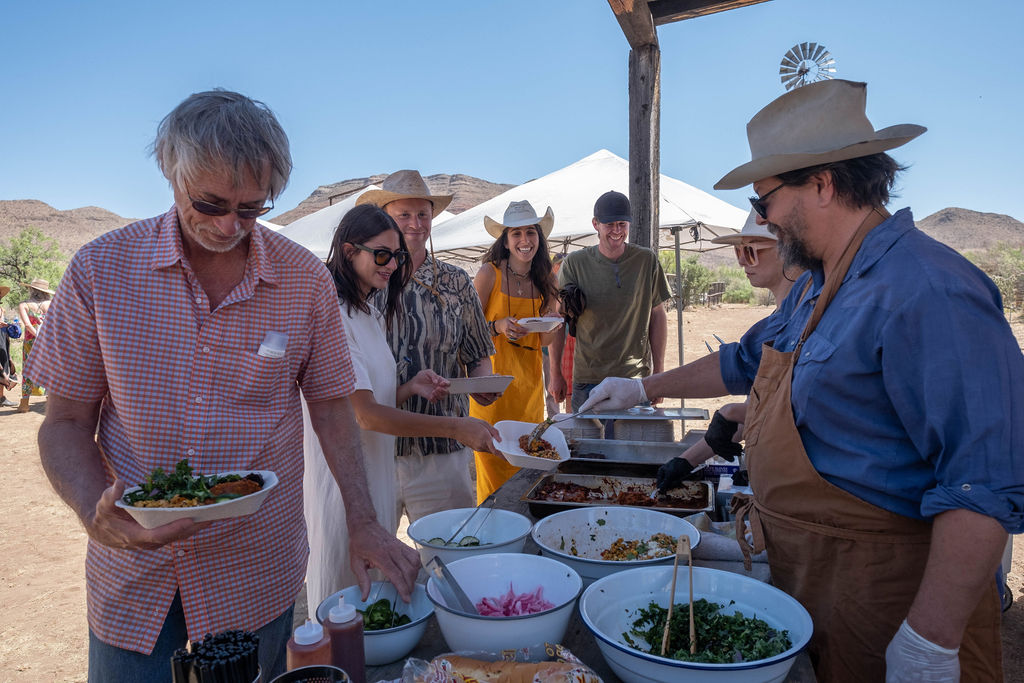 “We take it as an opportunity for us to learn more about the great work that’s going on in our region and some of the longer history of this area well before Donald Judd that people who are maybe newer to town might not have access to that information as readily,” said Murray.

The next Ranch Day is set for Fall 2023. A hike, which in the past has been led by Facilities Manager Randy Sanchez, was not offered this year due to high temperatures, but will likely be a feature of the forthcoming Ranch Day. Murray said at its core the day allows for people to spend time on a private ranch, an experience not everyone has regular access to.

“I think, for a large group of people to be able to come out, eat, and spend time together in Pinto Canyon,” said Murray. “That is a little bit more rare.”