PRESIDIO COUNTY — Last Friday, community members marked the 25-year anniversary of the death of Esequiel Hernandez, Jr., a teenager from Redford who was killed by Corporal Clemente Bañuelos of the US Marines in a drug interdiction mission gone tragically wrong. The Big Bend Sentinel and Presidio International broke the news for a local audience on May 22, 1997, and continued to provide coverage as a trial, lawsuit, and Congressional investigation failed to bring charges — or legal consequences of any kind — against Bañuelos. The following is a series of excerpts from the two papers’ coverage, and from letters to the editor and wire reports reprinted in our pages. Bylines, where available, are attributed after each excerpt.

He added that authorities on the scene wouldn’t let Hernandez’ father approach his son’s body and treated the father rudely Tuesday night.

Family members told him it was Hernandez’ daily routine after school to tend the family’s herd of goats and take a gun with him to shoot rabbits and snakes. 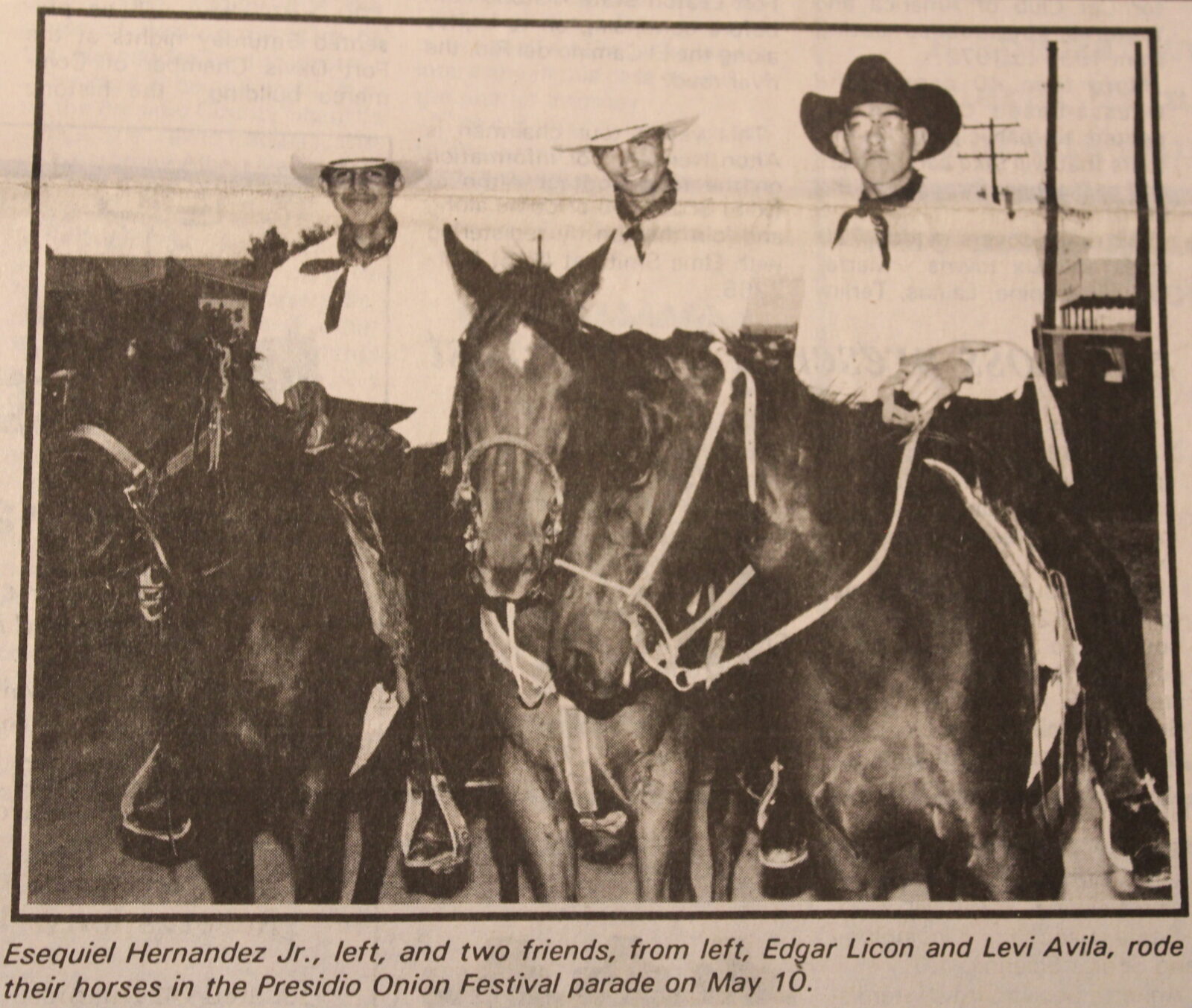 83rd state judicial attorney Albert Valadez said the last name of the soldier who shot Hernandez is Bañuelos. “That’s all I can tell you.”

Rarely does a crowd appear in any county of sparsely-populated West Texas, but in the remote hamlet of Redford, in south Presidio county, on the splendid river road east of Presidio, between 500 and 800 mourners climbed the promontory where Esequiel was laid forever to rest. – Simone Swan

There was no attempt to make verbal contact with the boy or fire warning shots, Kelly said, adding that a stiff wind at the time prevented the soldiers from communicating well with each other, much less with Hernandez.

However, a family member said the wind was calm at the time, although a thunderstorm developed a short time later.

Esequiel Hernandez Jr. was an always smiling student with a strong interest in the history of his home. In August I assigned the first long paper of the year. While most students wrote of childhood incidents, Esequiel chose to write a brief history of how the Mexican Revolution of 1910-17 affected the Big Bend region. – Kevin Stahnke, English II teacher

In my opinion, I think that nothing will be done in this matter, because Esequiel Hernandez, Jr. is Hispanic and was by himself. – Jesus Sanchez, Presidio High School Student

He was a very well behaved young man. He did whatever was asked of him without complaint. He was very quiet and very likeable. – Deanne Mejia, PHS librarian

“The whole community feels violated. We were invaded by people we didn’t know. Any one of us could have met a similar fate. They were wearing camouflage with no insignia.” – Rev Mel La Follette, retired Episcopal priest from Redford

“Nothing is yet known about the soldier who did the shooting. It could be that he is another young man who was scared out of his wits and is now devastated over having killed another young man.” – Emilie B. Severin, Alpine

“I cannot conceive that a young man of integrity like Esequiel Hernandez, Jr. could possibly launch an offensive assault on four U.S. Marines!

The U.S. Marines are unquestionably a force of able-bodied fighting men who have served our nation with distinction in wartime situations. But I question the logic in using men who have been trained as warriors in non-battlefield situations.” – Steve Haggard, Children’s Minister at Big Bend Church in Terlingua

In the 1910s while U.S. Cavalry troops were stationed along the border in the northern part of our valley, just north across the arroyo from one of the family ranches — a tragic incident similar to the recent one in Redford happened to an uncle of mine. Filiberto Gonzalez, a US citizen, was tending his animals, having gone down to the river to water them, when US soldiers apprehended him, brought him to their encampment, and shot him! – Aurora Hernandez, a former Presidio county resident

The mere existence of Joint Task Force 6 is not only blatantly unconstitutional (not that that matters much anymore), it is causing our founding fathers to thrash in their graves. Just the thought of employing our military against our own people was revolting to them. – Dr. Jimmy T LaBaume, Chair, Brewster County Libertarian Party

Hernandez’s wound seems to indicate the right-handed teenager was not facing the Marines when he was shot.

My old man made me go out and feed the cows every day after school in Paris, Texas. Ten miles out in the country, I always took a .22 or shotgun on the detail. I plinked around, as most any teenager would. It made the chore somewhat enjoyable.

On May 22, Esequiel Hernandez Jr. went out to tend his family’s livestock after that day’s classes at Presidio High School. He, too, had a .22-caliber rifle with him. A Marine shot him dead. – Edward Devilla Holman III, Dallas

I am concerned about the militarization of the Texas border. I support the use of military equipment and supplies to help fight drug trafficking, but I believe the US Border Patrol should be in charge of the border. – George W. Bush, Austin

“In June, it was a front-page story in the New York Times, the nation’s largest daily newspaper. USA Today and the Los Angeles Times also have covered the incident.

The CBS and NBC television networks each featured the story on evening national news reports. The Associated Press has routinely budgeted the story — and updates — on its national and Texas wires.

Family members have said Hernandez usually carried the 1890s-vintage rifle given to him by his grandfather to protect the goats from animal predators.

We note that although a number of Redford residents have knowledge of details relating to this case, none has been interviewed by any branch of law enforcement. – Rev. Mel LaFollette, Enrique Madrid, Redford

JTF-6 supplies intelligence, equipment and when needed, manpower to assist the Border Patrol in its ever increasing role of law enforcement.

The Associated Press, the San Antonio Express-News and the Conroe Courier reported Tuesday night that Valadez had offered immunity to the trio of Marines in return for their testimony.

“They are appearing voluntarily,” Valadez said. “It’ll be a lot better than reading cold, hard statements that can’t answer questions. You grant immunity to those that you want to have testify about the facts that might result in a prosecution.” 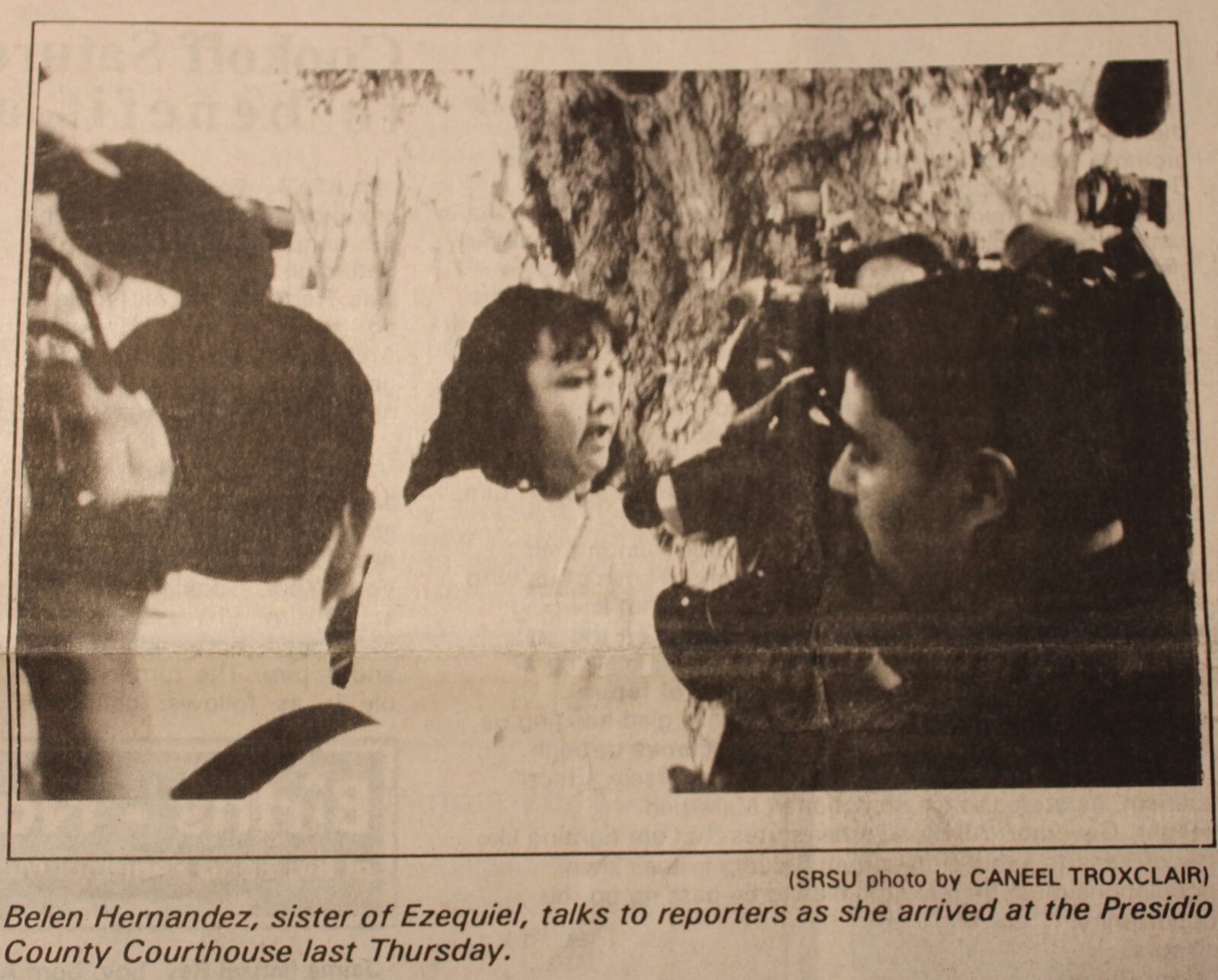 “Marines cleared of wrong-doing in death of Redford youth”

Presidio County Sheriff Danny Dominguez on Friday turned over to the FBI all the Redford shooting evidence in his custody as a federal civil rights violation investigation began.

The Justice Department’s entry into the case came after 83rd State Judicial District Attorney Albert Valadez couldn’t muster an indictment in the case, and a Presidio County grand jury failed to return an indictment.

“Low response to summons a factor in grand jury selection”

Rumors of collusion and a government cover-up are rampant. One issue that keeps coming up is the fact that several of the grand jurors are government employees.

Judge Kenneth DeHart of the 394th State Judicial District Court said that with the number of federal employees living in the county, it’s not unusual to have them selected for grand jury service or be in a petit jury pool.

“I have my feelings about the make-up of the grand jury, but I can’t tell them,” DeHart said. ‘I have to follow the law. It wouldn’t be proper for me to select a grand jury. If we had a better turn out…”

The judge was referring to the fact that 33 of the 75 persons summoned to this grand jury selection didn’t show up or their summons cards were returned by the post office. – Rosario Salgado Halpern 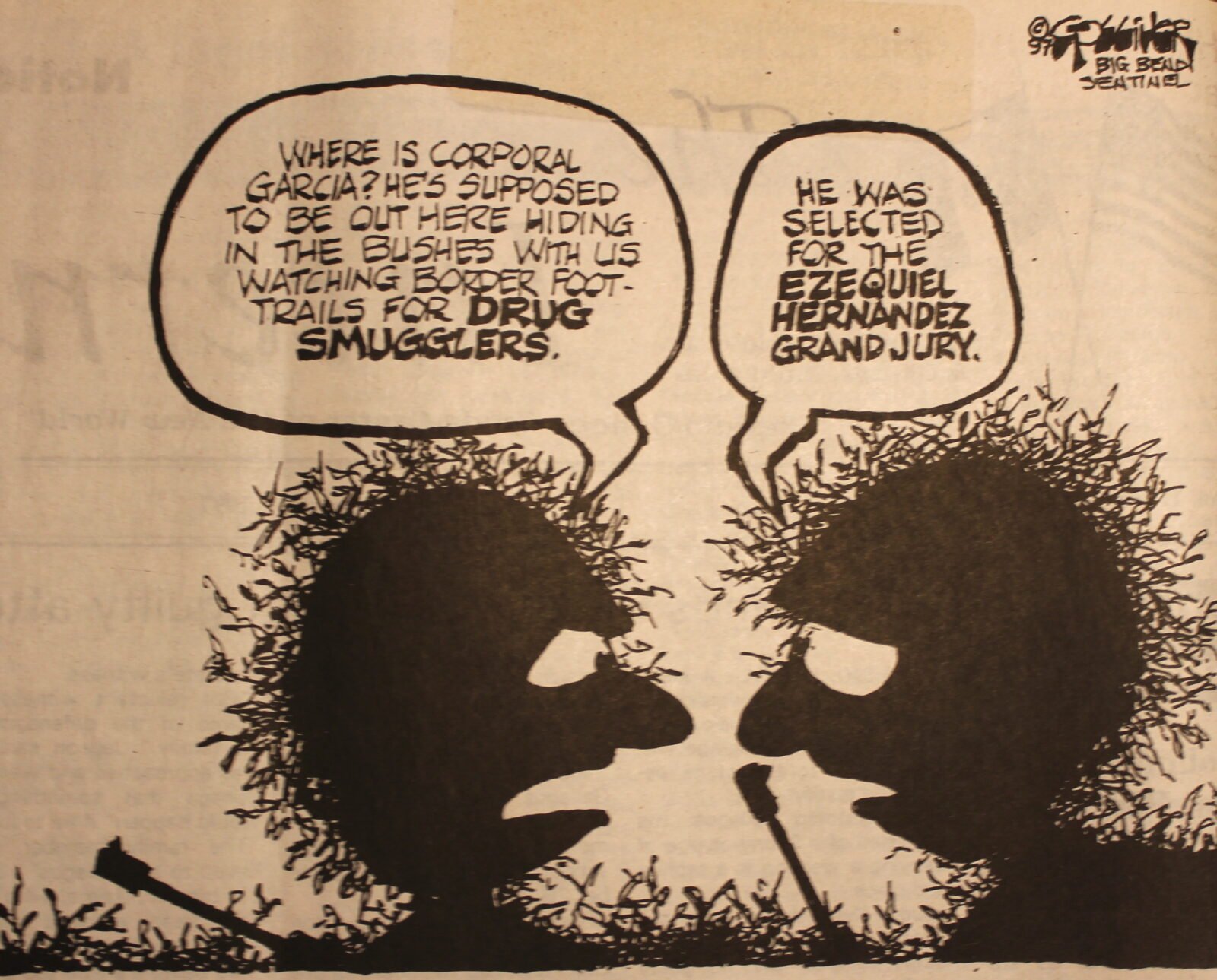 As an American woman with a son of my own, I beg you, Border Patrol, don’t pretend you are doing this on our behalf. Please stop gunning people down in this over-zealous attempt to prevent humans or drugs from entering our country. To point out the obvious but mostly ignored truth: the majority of our ancestors were immigrants. And maybe the effort would be better spent inside our borders, inside our homes, to work on the drug problem; if the demand weren’t there, neither would be the supply. – Christina Warren, San Diego, California

I don’t blame the Marine. He was doing what he was taught to do. I blame the bosses that put him in a position like that. I came here in 1953 in charge of this shation. I would never have put a rookie Border Patrolman on the river unless he had an old officer with him. – Buck Newsome, United States Border Patrol, Marfa

Pecos attorney Bill Weinacht said that he has been careful not to exploit the publicity surrounding this case, but “because I’m walking on sacred ground,” he said. “It’s impossible to avoid publicity in a case like this.”

After meeting with Attorney General Janet Reno, the head of a House immigration panel decided Tuesday to delay his inquiry into the fatal shooting of a Redford teenager by a Marine on a drug interdiction mission for the Border Patrol.

Two months after the House voted to allow the deployment of up to 10,000 troops along the Southwest border, lawmakers reaffirmed their support recently.

On a 261-150 vote, the House endorsed an effort by Rep. Jim Traficant, D-Ohio, to ensure that negotiators hammering out the final version of next year’s defense bill include the troops measure. 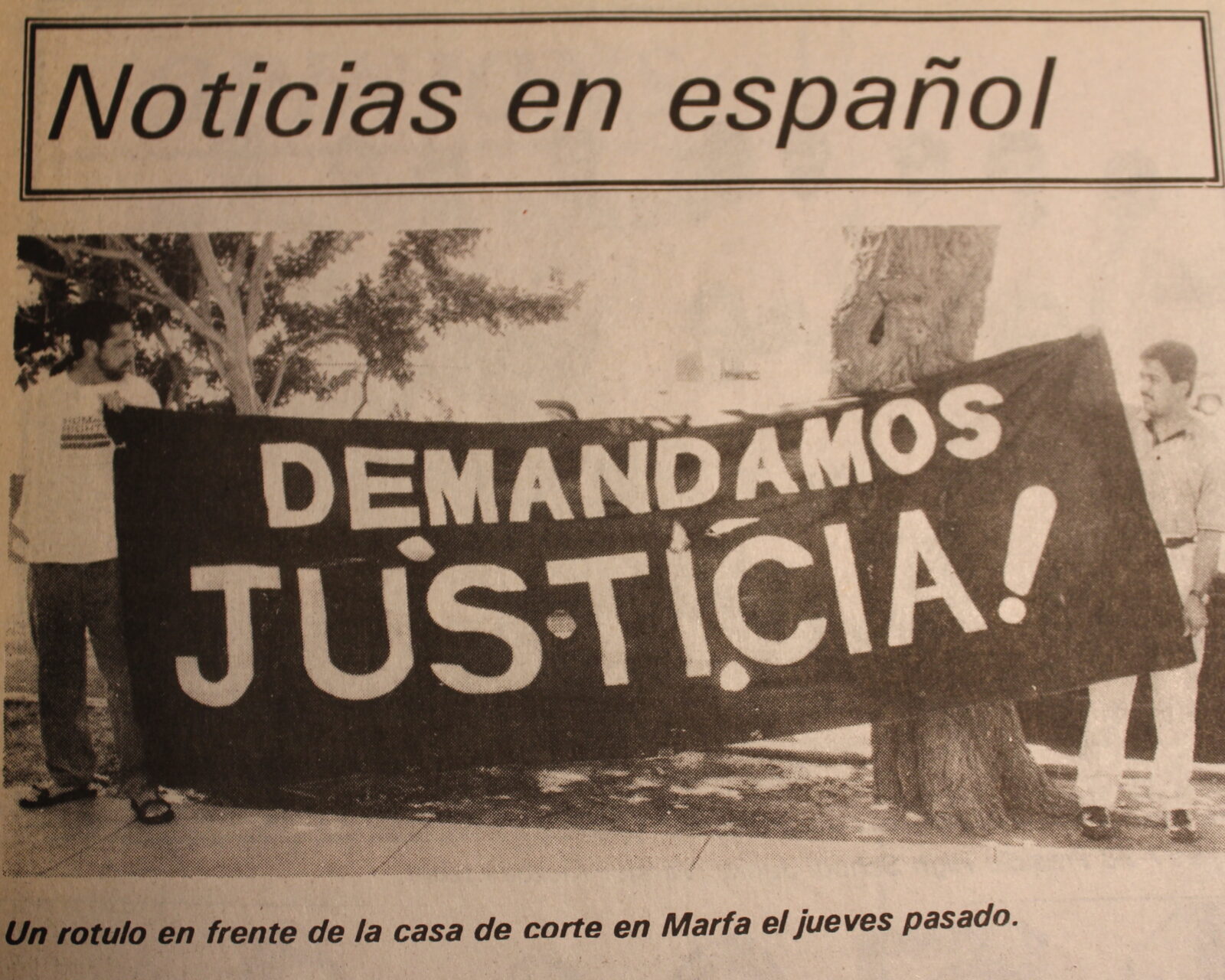 Meanwhile, Hernadez’ brother, Margarito, a Presidio County jailer who lives in Alpine, has named his new-born son after his slain brother.

The students brought candles, flowers, pan de muerto, calaveras, all kinds of fruit, tamales, candy, coffee, pictures of Esequiel, newspaper clippings about his death and pictures of icons of their favorite virgins and saints.

They also brought special things that they knew Esequiel liked — pictures of horses (some he drew), a rope, a sombrero, spurs and other personal items that belonged to him.

The three Marines have testified once again, but so has a Redford couple whose home backs into the hills where Bañuelos shot Hernandez. The pair was not called before the Presidio County grand jury.

Jesus and Diana Valenzuela said they were glad they finally had the chance to testify. The Valenzuelas said they heard the shot fired by Corporal Bañuelos that killed Hernandez. – Dick Sheffield

“It’s not worth the legal liability for our soldiers, and the actual amount of drugs seized throughout the performance of those missions proved to be modest,” said the senior defense official, who spoke on the condition of anonymity. –  the Scripps Howard News Service

Bañuelos remains a Marine and is stationed at Camp Pendleton, California.

“The family feels justice is too much to ask for at this point,” said Belen Hernandez, sister and family spokesperson. – Dick Sheffield

“A serviceman acted within the law when he shot a West Texas teenager while on a border drug patrol, Marine Corps investigators concluded in a report released Monday.” – the Associated Press

“It still affects me,” said Presidio County Chief Deputy Rusty Taylor. “Not only because an 18-year-old young man was killed, but that there was no justice in this entire case, no one was brought to trial. I learned that when dealing with the government, things do get swept under the carpet. If you had said that to me before this happened, I wouldn’t have believed you. I never believed it until this happened.”

The Hernandez family received $1.9 million in a settlement regarding Esequiel’s death, but they haven’t moved from Redford or changed their lifestyle much. HIs parents are reluctant to talk about the events outside the family, explained Margarito Hernandez, Esequiel’s older brother. “Some days I can’t even speak about it,” he said. “My throat gets a knot in it.”

Hernandez went into law enforcement after his brother died. “That’s mainly why I went into it,” he said. “I wanted to make sure people won’t be mistreated.” – Sterry Butcher

Around The Big Bend: Weekly Events in the Region