Once a Shorthorn, always a Shorthorn: Marfa High School graduates Class of 2022 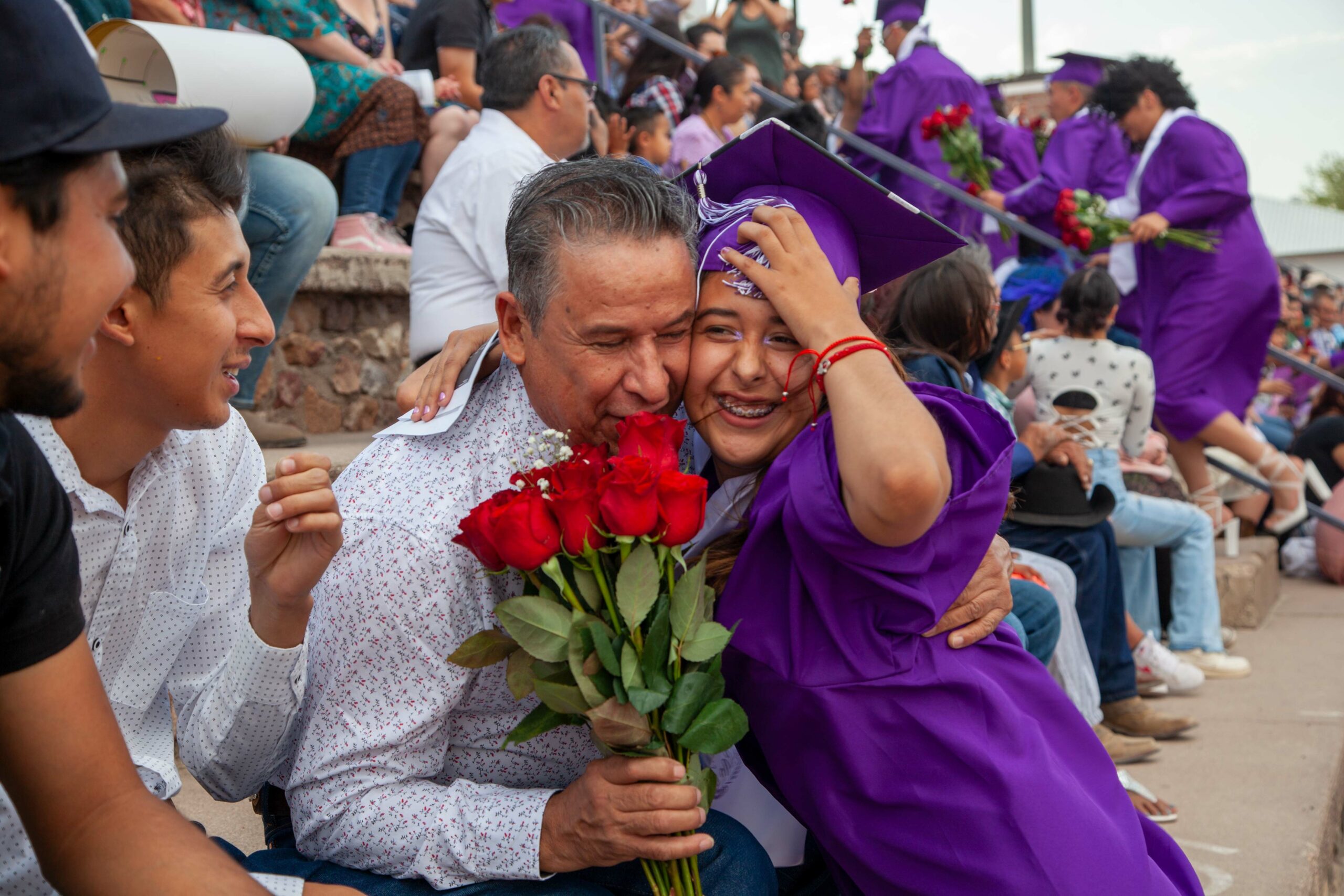 MARFA — On Friday evening, Marfa High School’s Class of 2022 formed a triumphal procession onto Martin Field in their purple graduation robes and caps, just as clouds of dust and sprinkles of rain began to clear from the venue, making way for the commencement ceremony.

Holding bouquets of red roses — and their caps, to prevent them from blowing away in the wind — the senior class of 29 students walked along the newly-laid track as announcer, English teacher and Athletic Director Linda Ojeda introduced them to cheering crowds of family and friends gathered in the stands.

Marfa Independent School District Superintendent Oscar Aguero wore a royal purple suit jacket and the board of trustees sat on the field alongside school administrators. It was the final graduation for Junior and High School Principal Allison Scott, who is set to retire this year and will be replaced by school counselor Luane Porter. 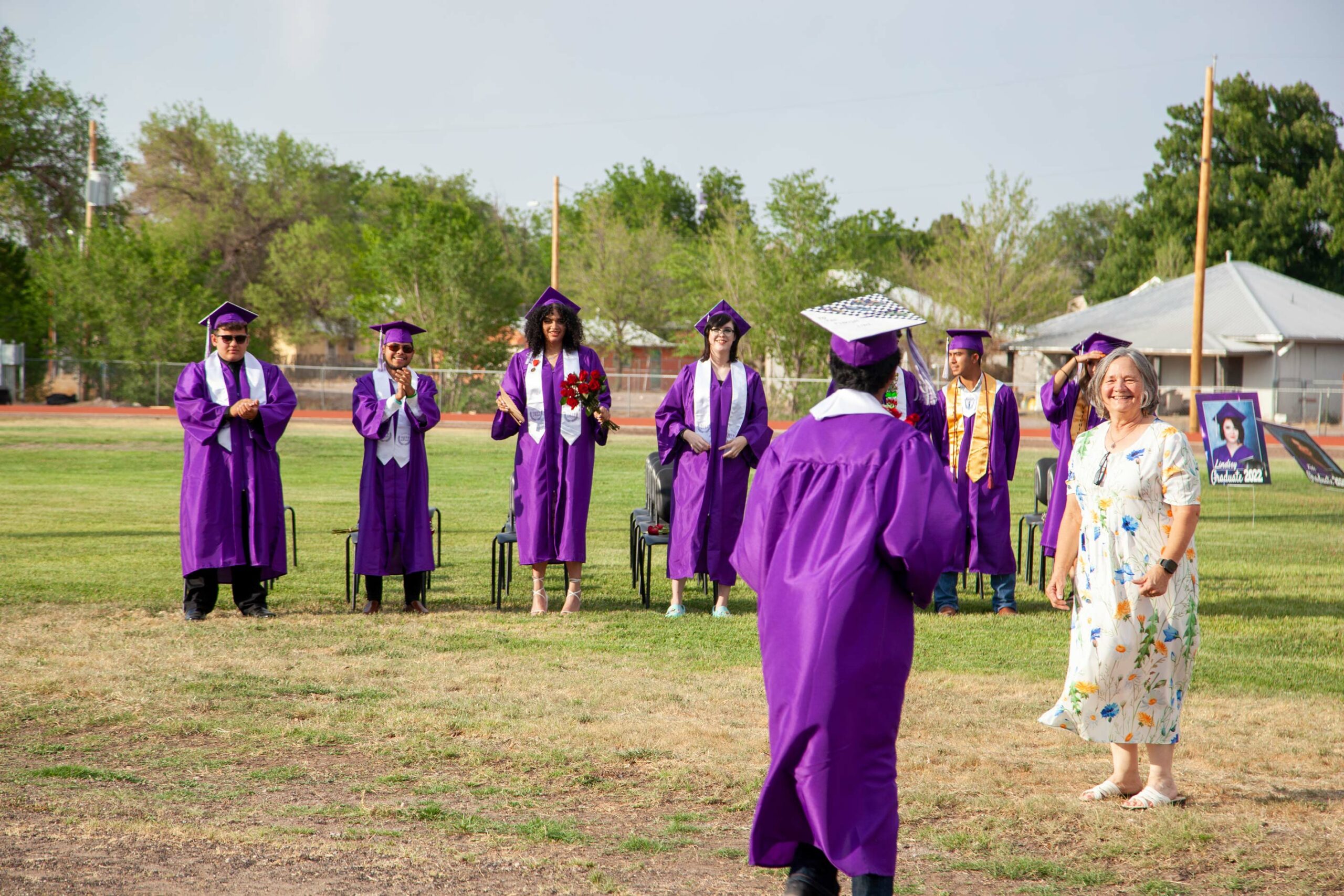 High School Principal Allison Scott greets senior Saul Garcia onto the field for the Class of 2022 graduation ceremony this past week. Photo by Mary Cantrell.

Before speeches began, the graduating class took part in the traditional parents’ tribute, flooding spectator seats to pass out their roses in a symbolic gesture thanking loved ones, as “I Hope You Dance” by Lee Ann Womack played through the stadium speakers.

Salutatorian Cristian Ontiveros took to the mic first, steadfastly delivering his prepared speech despite the wind’s interruptions, and thanked all those who made his high school career a success, from teachers to coaches to his grandmother for keeping him fed.

“To Marfa, as a community, thank you for giving me a safe and positive environment to grow up in,” said Ontiveros. “We aren’t just a small community, but rather a family. I am definitely proud to say I grew up in Marfa, Texas, and I’ll never forget where I come from.”

To his fellow seniors, he encouraged them to leave a lasting impression in their adulthood by making their communities a better place and being an effective force for change.

“My challenge to you all, beautiful people, is to go out and make a change to society so big that no one will forget who you are,” said Ontiveros. “I have confidence that many of us will be changing lives and making important decisions. Because after all, we are the future of this planet.” 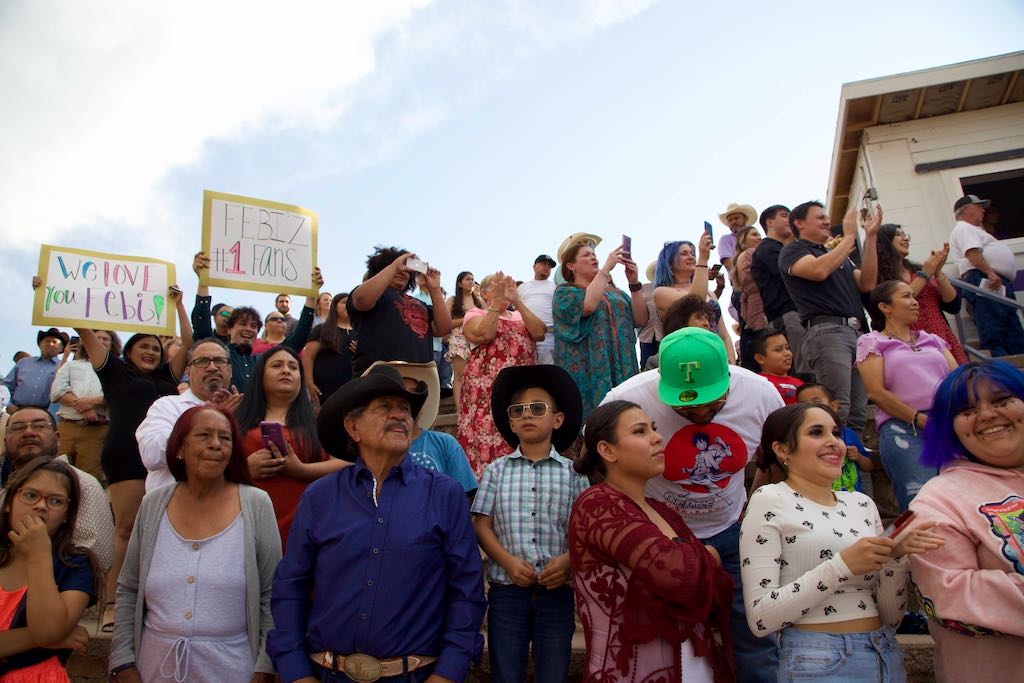 Next up was Valedictorian Odalys Chacon, who paused to tie up her hair before proceeding with her speech, which struck a humorous tone, acknowledging the diplomas they were going to receive that day were fake and the official awards would be received later this summer. Chacon thanked her family, teachers and the coaching staff, whom she said felt like parents at times and bestowed upon their athletes more than just the skills needed to excel in sports.

“Thank you for teaching us many life lessons that come from the court and applying it to future life lessons. Your job was to prepare us for when district [competitions] came around, but you did much more than that,” said Chacon.

She went on to recount collective memories from the past four years of her and her classmates’ high school experience — from the challenges brought on by the pandemic to new students and staff members, they had been through waves of change, she said.

In true small town fashion, Chacon poked fun at members of her cohort for finally getting their driver’s license, or a girlfriend, and recalled students breaking up, coming out of their shells and scoring high points in basketball games, revealing an intimate appreciation for her graduating class’s journey into young adulthood.

“Wherever you end up, strive for better, make a difference,” said Chacon, concluding her speech and introducing keynote speaker Zuri Izworski, a teacher at Dallas ISD, who formerly worked in Marfa and taught the class of 2022 as seventh graders.

Izworski ad-libbed her speech in part, using the experience as a lesson to show the students things wouldn’t always go according to plan and it was important to take life as it comes.

“Having a plan is cool, but life has different plans and she rules all. It is okay not to be prepared at times,” said Izworski. “It is how you adapt to the situation that shows how strong you truly are.”

She left the class with more nuggets of wisdom, promising infinite possibilities and constant change ahead of them. 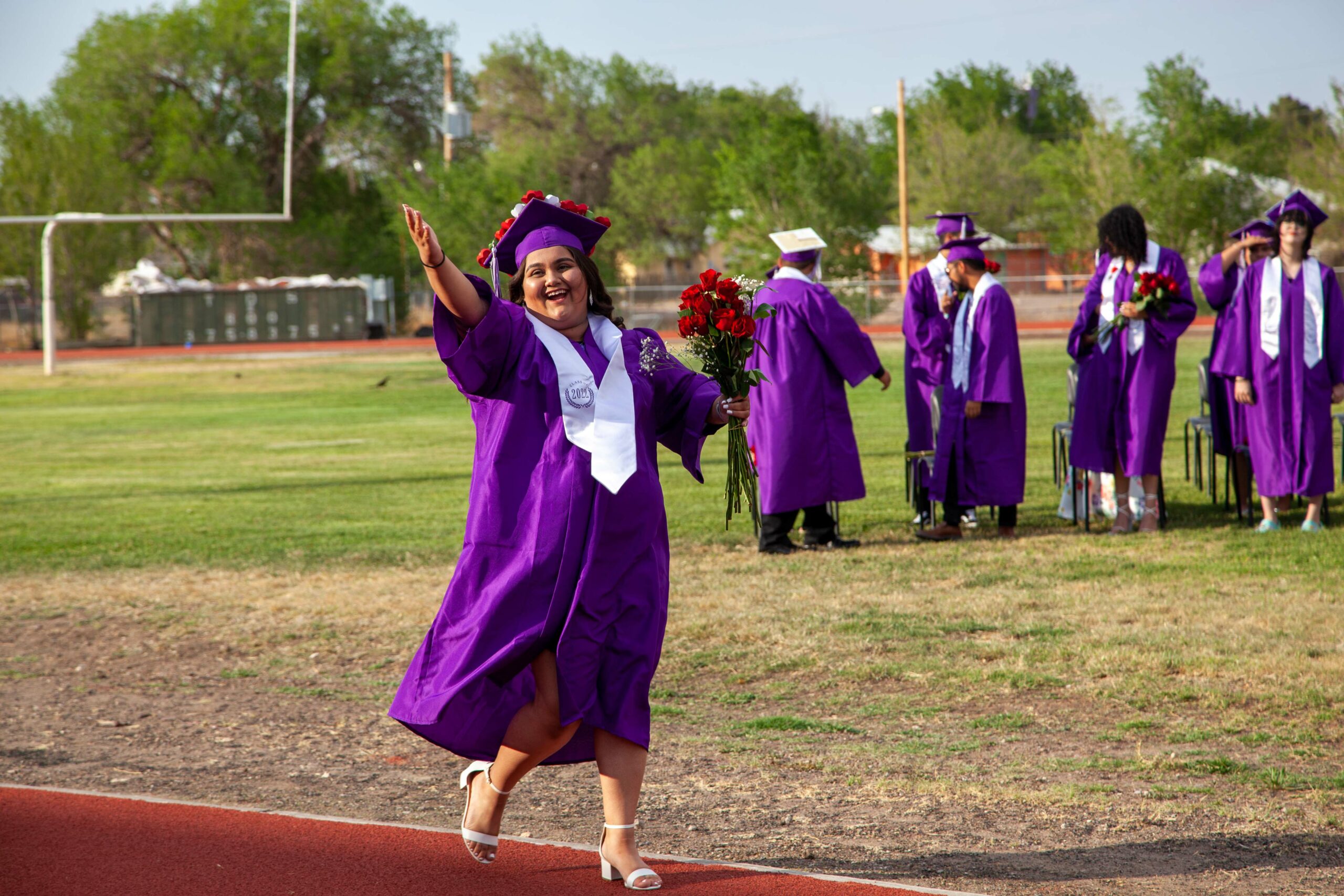 Graduating senior Brianna Ramos acknowledges her supporters as she heads onto Martin Field for the Marfa High School Class of 2022 graduation ceremony this past week. Photo by Mary Cantrell.

“I now challenge you to explore. You have been confined by the four walls that are Marfa, Texas, for many years. It is time to spread your wings and start new paths for yourself and future generations,” said Izworski. “The person that you are right now is not the person that you will be in 10 years. And that’s okay, go along for the ride. It’s fun at times. It’s challenging at other times, but it is well worth it.”

Principal Scott then certified the graduates, who ceremoniously moved their tassels and met in the middle of the field to form a circle before flinging their caps into the air in celebration. The ceremony concluded with the singing of the school’s alma mater, to which graduates and their families faithfully raised their hands in gestures symbolizing their Shorthorn mascot.