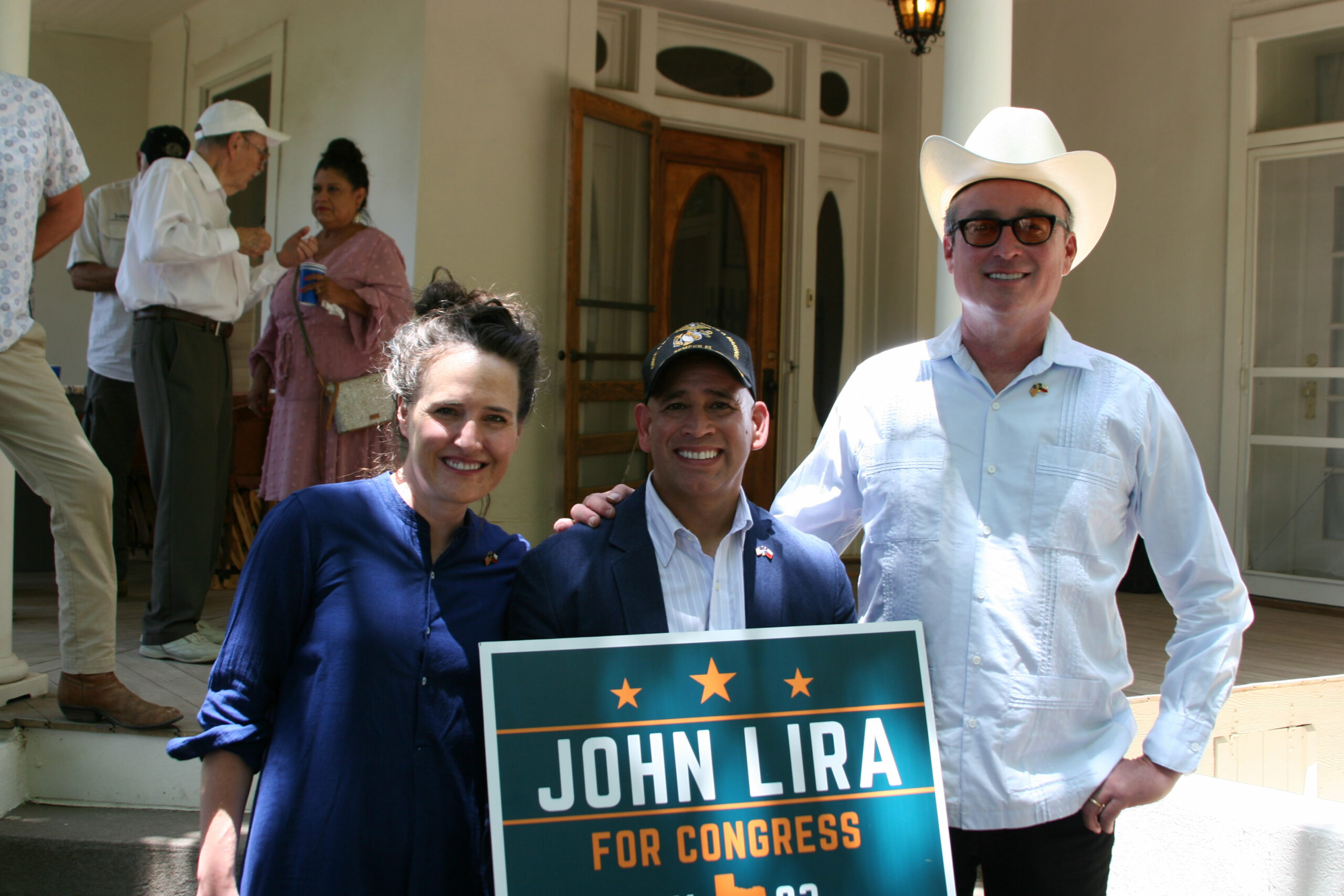 Lira, who is running against Republican incumbent Congressman Tony Gonzales, is visiting all 29 counties that make up Texas’ 23rd District this summer and fall ahead of the November election to spread the word about his campaign and meet constituents. Marfa’s meet-and-greet hosts were Hilary Scruggs Beebe and David Beebe, Democratic candidate for County Commissioner Precinct 4, who welcomed citizens and Lira at their home.

Miniature Texas and American flags were staked into the soil lining the entrance to the Beebes’ home, where a few dozen attendees, mostly Presidio County residents, snacked on tea sandwiches, cold beet soup and ice cream sandwiches. As David Beebe introduced Lira, attendees fanned out onto the front porch and lawn to hear an informal speech from the candidate, clutching cups of water and iced tea to beat the heat.

“John Lira needs your vote to unseat the incumbent. Unseating incumbents is very difficult,” said Beebe. “Incumbents, whatever party, have been here too long. We need some new leadership.”

After requesting support for his own campaign for county commissioner, Beebe took a moment to shout out another Democratic candidate in the audience, Jose Portillo Jr., who is running against Cinderela Guevara in the Presidio County Judge race in this November’s general election.

Lira, wearing a Marines cap, suit jacket and jeans, took the floor to claps from the audience and started off by introducing his campaign to unseat incumbent Congressman Gonzales, which he said was gaining momentum.

“I believe this district can absolutely flip. With your vote, with your help and with the help of folks in Fort Davis and Alpine,” said Lira. “We can finally win back this seat.”

Lira discussed his qualifications, which varied from serving in the Marine Corps for over 11 years, to earning a master’s in public policy from Carnegie Mellon, to working for government agencies such as AmeriCorps and the U.S. Small Business Administration for the Office of Veterans Business Development. Recently, Lira worked in the office of California Congressman Jimmy Panetta to introduce legislation he helped author while serving with the National Commission on Military National Public Service called the “Inspire to Serve Act.”

“The government has not only trusted me to go overseas and fight as a soldier, as a Marine, but it also trusted me to manage national programs and write national legislation,” said Lira.

Because Texas’ 23rd Congressional District is so expansive — including San Antonio, the seventh largest city in the U.S., many miles along the U.S.-Mexico border, bilateral trade ports, oil fields of the Permian Basin as well as aerospace company Blue Origin near Van Horn and a potential rare earth mine in Sierra Blanca — the district is facing broad challenges, said Lira.

“What happens here is going to have serious implications not only to you and I, but for our fellow Texans, for our nation, and actually has a global impact. We need somebody in this seat that takes his job seriously,” said Lira.

Next, Lira expounded on how the national spotlight was recently shone on the district and, more specifically, Congressman Gonzales in the wake of the mass shooting at Robb Elementary in Uvalde in late May. Lira noted that Uvalde, which had a campus officer and a local police force, wasn’t even one of the district’s most vulnerable areas in regards to school security. New evidence including law enforcement transcripts and school security footage revealed a 46-minute delay from the time officers entered the school to the time they broke into the classroom where the gunman was holed up. Investigations into law enforcement’s response are ongoing.

Lira, who supports bipartisan gun safety reform, including prohibiting the sale of some semiautomatic firearms to people under 21, criticized Gonzales’ continued opposition to gun control measures, including his decision to vote no on the Enhanced Background Checks and Bipartisan Background Checks acts of 2021.

“[The tragedy in Uvalde] has brought national negative attention to Congressman Tony Gonzales, who refuses to answer basic questions on national media interviews and votes no against the Protecting Our Kids Act and has doubled down on the NRA line to not support any bipartisan gun safety measures,” said Lira.

When reached for comment, Congressman Gonzales defended his opposition to the Protecting Our Kids Act, arguing it did not address the “root causes” of shootings.

“I voted no on legislation that fails to meaningfully prevent widespread gun violence or ensure the safety of our kids in schools,” said Congressman Gonzales. “This purely partisan, messaging package focuses on unrelated provisions, such as restrictions on gun storage, that don’t address the underlying issues behind the Uvalde shooting.

“My constituents want real solutions like access to mental health services and improved school safety. That’s why I am laser focused on having serious, bipartisan discussions around legislation that will address the root causes of violent and heinous crimes,” added Congressman Gonzales.

At his meet-and-greet in Marfa, Lira stated he himself is a gun owner and understands the culture around ownership of firearms is strong in the state, but that serious reform is required.

Acting as a community partner and advocate and working to bring additional resources to the district are key roles in serving as a Texas representative, said Lira. Unlike his opponent, he said, he would have voted for the American Rescue Plan, John Lewis Voting Rights Act and bipartisan infrastructure bill which would have brought jobs to Texas.

“Is this the type of representation that we want? Is this the voice that is representing us right now, accurately, in Washington, D.C.? I think not. I think we could do better,” said Lira.

Lira wrapped up his speech with a request for support, asking those gathered to spread the word about his campaign on social media, donate and volunteer. He stayed to take questions from Presidio County voters and pose for photos. Attendees filtered out, some toting newly-acquired “Lira for Congress” yard signs.

Lira is set to return to the Big Bend region in September. Gonzales’ office did not provide information regarding whether or not the congressman would be visiting the tri-county area or hosting virtual town halls in the lead up to the November election. 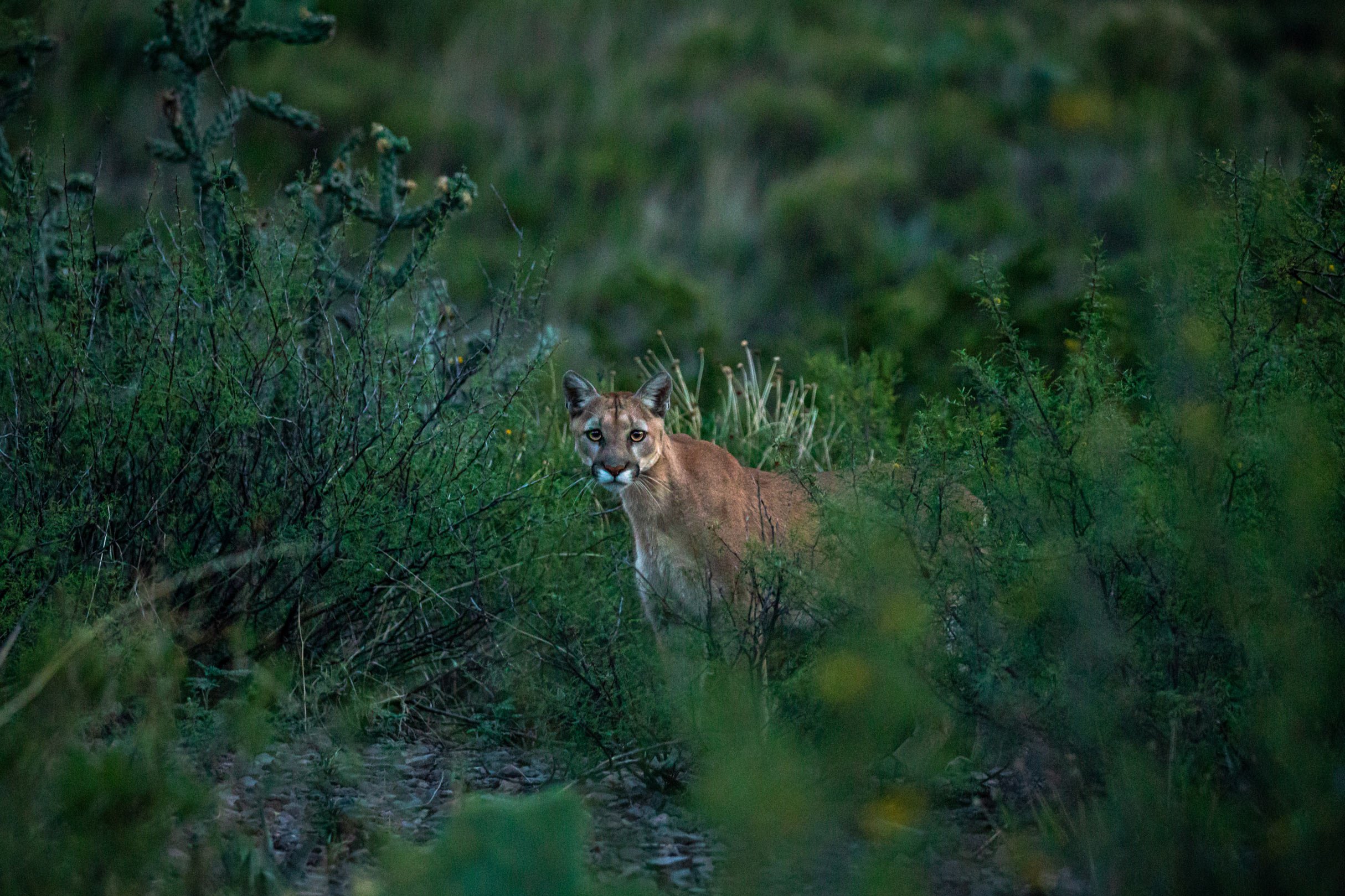