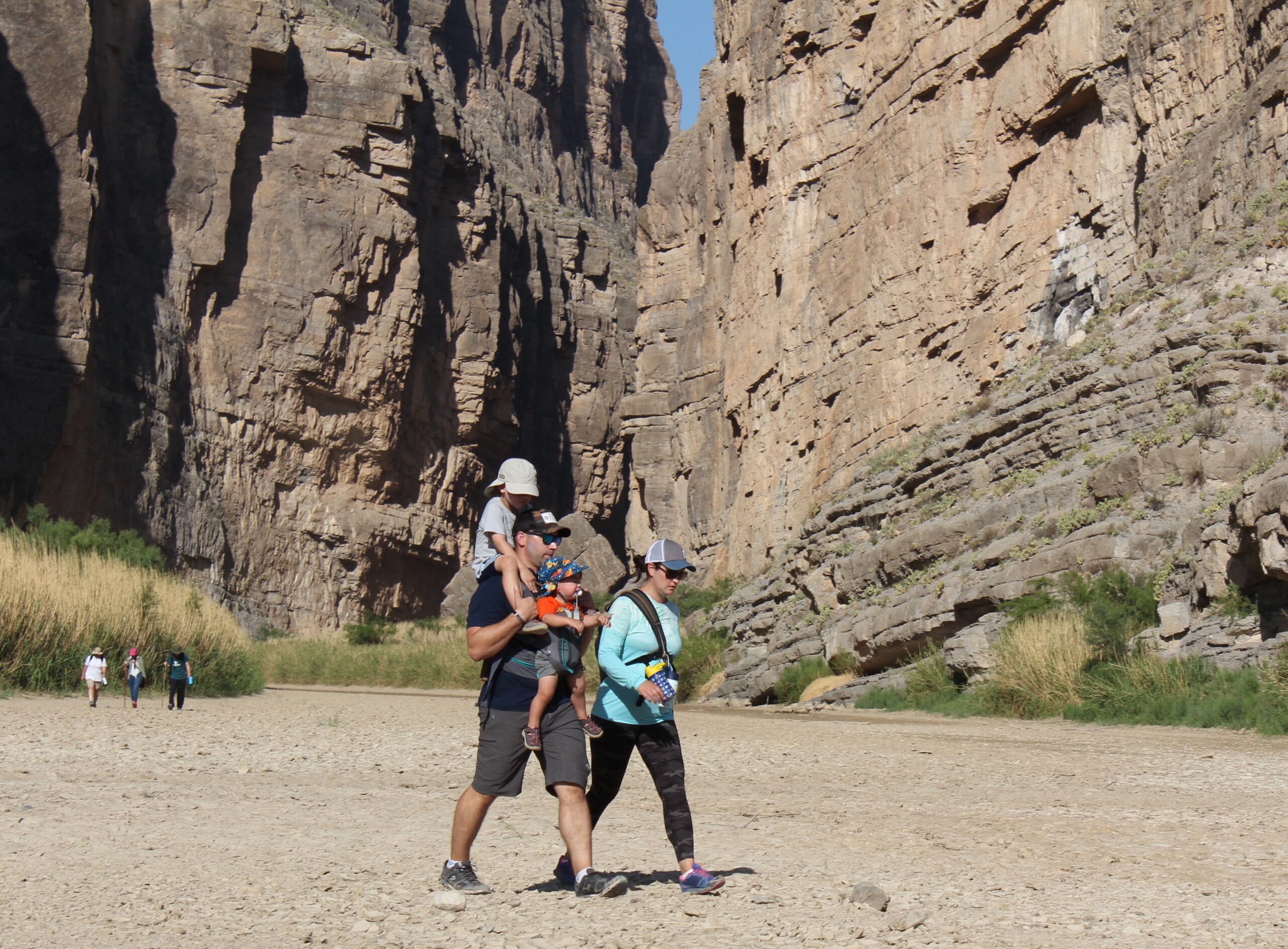 Samantha and Matthew Cohen of Central Texas hike with their sons, Luke and Liam, in the dry riverbed in Santa Elena Canyon. Photo by Sam Karas.
Subscribe

BIG BEND NATIONAL PARK — A report released at the end of June detailed just how much Big Bend National Park supports the regional economy, to the tune of $61 million dollars. That’s the estimated boost the park provided to neighboring “gateway communities” in 2021, a year that saw inflated visitor statistics in the wake of the COVID-19 pandemic.

Back in January, the park announced in a press release that the previous year had smashed visitation records. 2021 saw 581,000 visitors, a 49% increase from 2016. In the midst of periodic park closures due to the pandemic, more tourists than ever before made the trek to one of the most remote parks in the contiguous United States.

The report released last month puts a price tag in front of those numbers. According to the National Park Service, visitors spent an estimated $53 million in the region last year, supporting 726 jobs that wouldn’t exist without the tourism boom. The $61 million total figure includes increased wages and benefits boosted by visitor spending.

Big Bend National Park Superintendent Bob Krumenaker explained that while folks who live and work in the area are feeling the impact of increased visitation, the hard data provided by the National Park Service is speculative. “​​None of the data for Big Bend National Park is based on actual counts from things that are happening locally this year,” Krumenaker explained. “They’re based on a picture of what the economy here looks like, and then they use national algorithms to figure that out.”

Lynne Koontz, an economist for the National Park Service based in Fort Collins, Colorado, explained that’s because the algorithm’s data for Big Bend is missing an important piece: on-the-ground surveys of visitors tracking their spending and lodging. Those systems are already in place in other parks; it’s not yet clear when they’ll be implemented at Big Bend. “For parks that haven’t been surveyed yet, we used survey data from similar parks that have been surveyed to develop generalized spending profiles,” she said.

One of the challenges of quantifying Big Bend National Park’s economic impact with anything “generalized” is the remoteness of the park. The Park Service’s algorithm defines “gateway communities” as any community located within any county that touches a 60-mile radius of a park. For Big Bend and the Rio Grande Wild & Scenic River, that includes Presidio, Brewster, Terrell and Pecos counties.

Some of the park’s “gateway communities” have tourist economies that don’t always overlap with park visitation. For example, 49,000 people visited the Chinati Foundation in Marfa in 2019; for decades, the museum has been considered a pilgrimage for art lovers, many of whom visit the region specifically to tour Chinati and opt out of the long drive to visit the park during their stay in Marfa.

Krumenaker also pointed out that the vast majority of park visitors drive a long distance from somewhere else. “Regardless of the exact definition of a gateway community, it clearly doesn’t include Dallas or San Antonio, and yet a very high percentage of park visitors come from far away. There’s money being spent by those people on gasoline, on lodging, on renting equipment — that’s not being counted.”

Despite the park’s statistical quirks, Krumenaker still appreciated the perspective the survey offers. The statistics make it clear that parks around the nation are seeing similar upward trends. “One of the strengths is that it’s a consistent formula year after year and every park is going through the same analysis,” he explained. “The weakness, frankly, is that it is not site specific, so the author doesn’t really know what’s going on in Fort Stockton or what’s going on in Marfa.”

Krumenaker also noted that the park’s own visitation statistics are not hard-and-fast numbers — they’re based on traffic counters and river permits. Sensors at Persimmon Gap and the Maverick Entrance Station count the number of vehicles that drive by, but not necessarily the number of people inside those vehicles or repeat visitors to the park. Similarly, river permits filed commercially or at satellite collection bins don’t always accurately reflect the number of boaters enjoying the park’s waterways.

Krumenaker noted that record-smashing visitation to the park was a complicated issue for local residents. “It’s really interesting, I think it is a mixed blessing,” he said. “A lot of people in this area obviously make their money from the tourist economy, but the average wage in the tourist economy is low and we’re hearing more and more concerns about change. I think people want to manage the tourists as much as possible so that the changes are positive and not negative. That’s a very challenging thing.”

The reality is even more nuanced for the folks who make their living directly interacting with tourists. Isai Llanes, a server at a popular bar and restaurant in Terlingua, works so he can support his partner and their baby daughter. He moved to the area just before the pandemic, and has worked a number of service industry jobs in and out of the park to get by.

Despite seeing inflated paychecks during the tourism boom, he has serious concerns. “My fear is that we are growing too fast and we don’t have the resources,” he said. A few examples: there’s no clinic he and his family can pop into for regular checkups, and no vet he can take his dog to in an emergency. The national baby formula shortage hit the local grocery store, forcing his partner to travel three hours round-trip just to feed their daughter.

There’s also nowhere to live for folks like Llanes and his partner — millennials hoping to live and work in the area full-time and raise families. According to AirDNA, a company that tracks vacation rental statistics, there are 293 active short term rentals in Terlingua; finding a long-term rental is nearly impossible for people without local connections. The price of land has ballooned, pushing young upstarts into the far reaches of Terlingua Ranch, where commutes to service industry shifts get costly and time-consuming. “There’s plenty of jobs, but just not enough housing,” Llanes said.

Because he started working in the local service industry before the pandemic, he’s watched as the profile of tourists who visit Big Bend has changed. “The majority that come are avid outdoor enthusiasts that want to hike, want to camp, want to do the river,” he explained. “But there’s more people coming in that saw the Instagram post or the TikTok post and they just want to recreate that picture. People aren’t doing their research, they’re just coming out here because they saw it online.”

That kind of surface-level tourism strains local services and utilities. “As a tourist, you have to know that it’s not the city. Enjoy that there’s limited resources, because it puts in perspective how blessed we are,” he said. “[Locals] are conscious of the environment, about how long we take showers, about how much water we use. I think a lot of people aren’t conscious of that. Yes, they’re bringing in money, but at what cost to us?”

The pandemic had an exponential effect on the already-booming tourist economy in Terlingua. Llanes definitely enjoyed a heavier wallet after the state reopened for business in May 2020, but it put him on the front lines of potential COVID exposure. “The money was great in 2020 and 2021 — gas prices were low, and people still had their [stimulus] checks. You couldn’t fly, so everyone was driving somewhere,” he explained. “Everybody had the same idea to isolate, but it was a catch-22. They thought [Terlingua] was the best place to isolate but then they’d all come to the busiest restaurant in town.”

Llanes used his own stimulus money to launch his dream side hustle: making T-shirts and stickers mostly geared toward locals, with inside jokes and catchy slogans. He has a small brick-and-mortar in the Study Butte RV Park called Pollo Prints. He’s hoping to expand so other artists can make and sell work there, too. “I just want people to come in and enjoy local art, local community, local stuff,” he said.

What he loves most about Terlingua is that community — a community he acknowledges is in flux. Though her hometown’s future is uncertain, he wants his daughter to grow up with the same values. “I don’t know the Terlingua of old, I’ve heard the stories,” he said. “It’s a new little boomtown. It’s scary, but it’s exciting. Change is inevitable, so you’ve got to adapt to the change and accept it.”

Despite juggling multiple jobs and dealing with the region’s challenges, he’s not here exclusively to make money. The natural beauty and quality of life he enjoys in Terlingua with his family make it all worthwhile. “I was making a ton of money in Houston, and felt like I never had enough. Now I make half of what I used to make and I feel like I have more than plenty.”