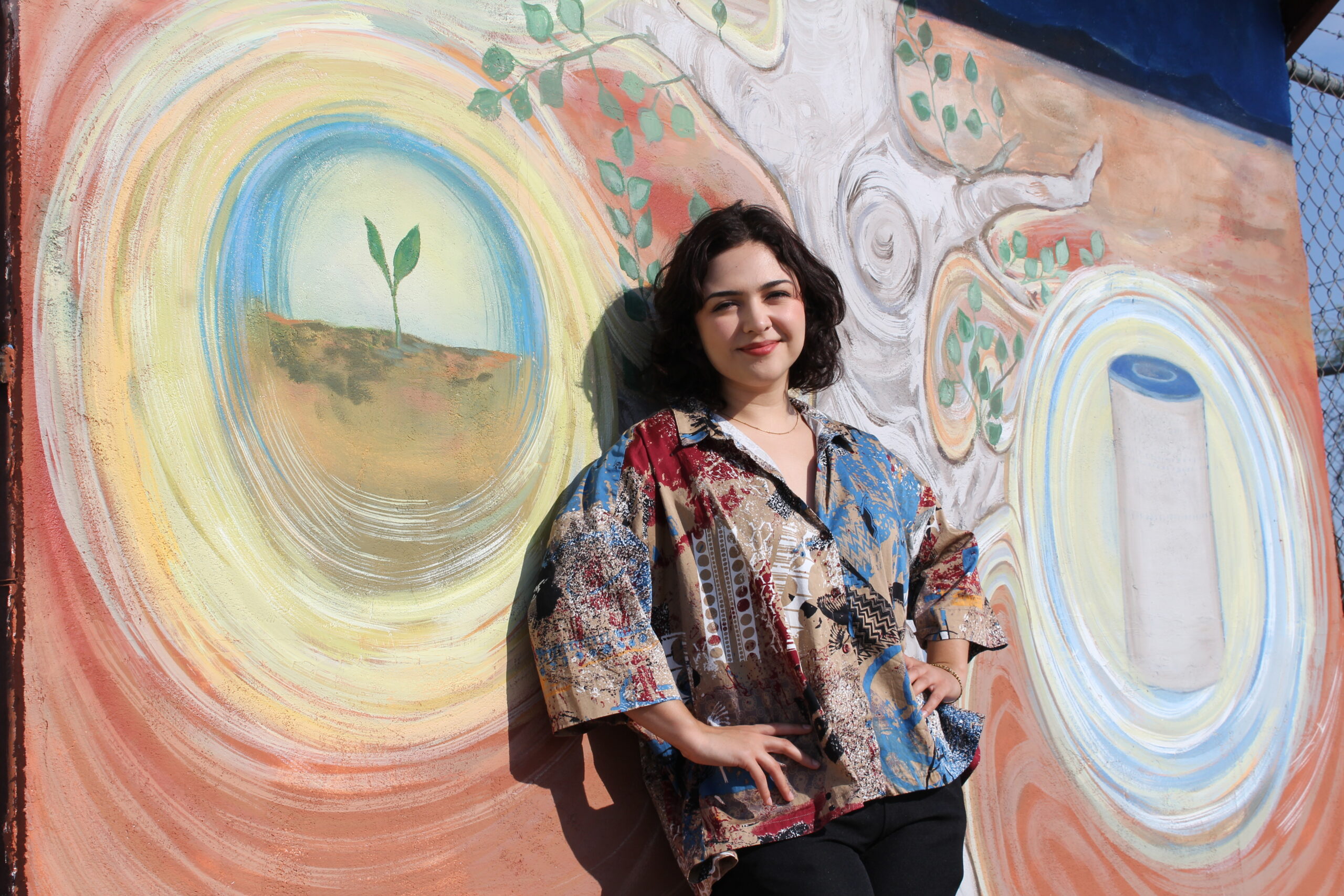 Yosdy Valdivia strikes a pose in front of her mural at the Presidio Recycling Center, celebrating Project Homeleaf and local youth’s commitment to environmental causes. Photo by Sam Karas.
Subscribe

PRESIDIO — The Presidio Recycling Center has a fresh new face, thanks to local artist Yosdy Valdivia. Valdivia has partnered with Project Homeleaf to bring public art to the Recycling Center, which celebrated its 10th anniversary last month. The mural combines symbols of Project Homeleaf’s efforts around town with Valdivia’s signature artistic flair.

Valdivia was inspired as a budding artist by Laurie Holman, a local artist and teacher, to take her talent to the next level. Holman encouraged Valdivia to enter competitions and to pursue a Bachelor of Fine Arts at Texas State and Sul Ross. After she graduated, she came home to Presidio and Ojinaga to try to make a living as an artist.

In the past few years, she’s slowly starting to get more gigs — the Frontier Travel Center on Highway 67 hired her to paint a mural, and then she was contacted by Ramon Rodriguez of Project Homeleaf. “What they’re doing is something nobody really does,” she said. “They wanted something that would represent what they’re doing and call attention to it.”

Valdivia was happy to lend her skills to the effort. Her painting is tied together by an alamo, or cottonwood tree, to pay homage to the local ecosystem. Radiating out from the alamo are environmentally conscious images, like wind turbines and tree saplings. Project Homeleaf members chose the design, and Valdivia brought it to life.

Ramon Rodriguez, founder of Project Homeleaf, said that the only writing on the mural is a motto: “if not us then who, if not now then when?” The meaning is supposed to cause passersby to stop and reflect. Rodriguez sees the mural itself as a kind of instruction manual, helping light the way for future climate activists. “We want people to ask questions, because asking questions is a way of spreading awareness,” he explained.

Last fall, Project Homeleaf, along with the recycling center’s founder, Elvira Hermosillo, struck a deal with the city to keep the recycling center open in exchange for a promise that they’d keep it staffed. Since then, the center has seen record-high turnout, a well-attended anniversary party, and the installation of recycling bins around town for folks who can’t make it when the center is open.

Hermosillo reported that 33 people — eight new recyclers — attended the “Recycling for Raspas” event to celebrate the recycling center’s anniversary. For that event, the Big Bend Conservation Alliance partnered with the Pink Flamingo to offer snowcones to folks who showed up to the party with recyclable goods.

The mural project was supported by the board of the Presidio Municipal Development District (PMDD), which donated $2,500 to cover Valdivia’s costs and materials. The City of Presidio donated the space, and Cesar Leyva offered his expertise to help the young activists erect the board the mural is painted on. Leyva had the bright idea to make the board mobile: if the recycling center grows or changes locations, the mural can move with it.

Valdivia is hoping that this project will help her grow professionally as an artist. Her parents own El Camino, a grocery store on the outskirts of Ojinaga; while she enjoys working with family, she’s hoping to one day fully support herself through her art. “I’m really trying my best to make it out here as an artist. Hopefully I can get out and work on my masters,” she said.

It will take her a little while longer to finish the project — Project Homeleaf is hoping to host a celebration of her work, date to be determined.

The Presidio Recycling Center is open Tuesdays and Thursdays, 4:30 p.m. to 6 p.m.