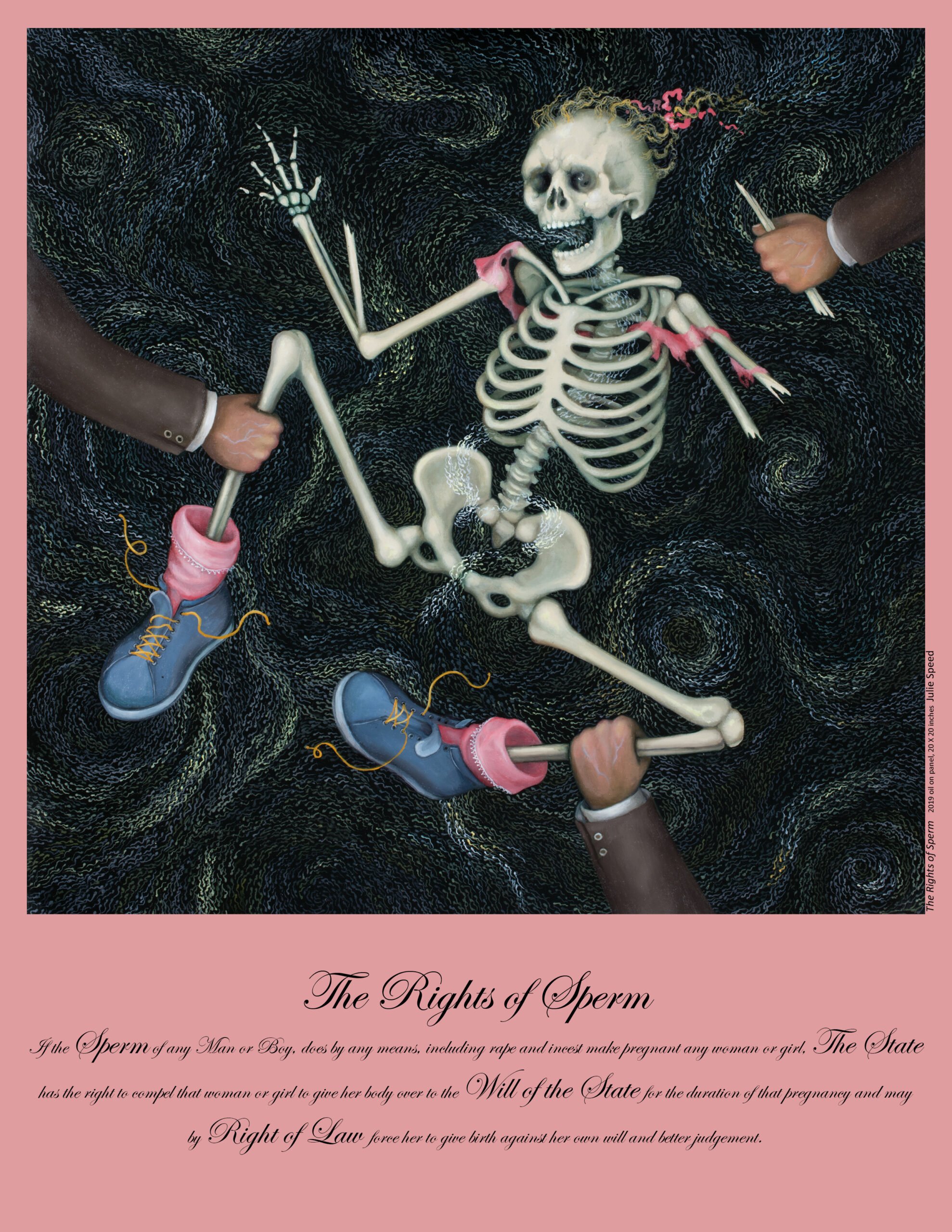 “The Rights of Sperm”, a painting by Julie Speed, will be available in a limited-edition print for purchase at Monday’s fundraiser for the Big Bend Reproductive Coalition.
Subscribe

MARFA — On Monday, the Big Bend Reproductive Coalition is inviting the community to come out for a dinner and a show at El Cosmico. Proceeds from a selection of work by local artists and food dished out by Cloudy’s Desert Bistro and will go to benefit the group’s mission: spreading educational materials about reproductive healthcare in Far West Texas.

The Big Bend Reproductive Coalition was formed in the wake of the Supreme Court’s decision to strike down Roe v. Wade. The group can’t provide abortion services or contraceptive healthcare directly, but they’re hoping to help Big Benders make informed decisions about their reproductive health.

The event will kick off at 6 p.m. Tiger Eyes, an all-girl outfit from Alpine, is the headliner; Thor & Friends will also perform with Lindsey Verrill. DJ Calletana Vargas will then provide beats for everyone to dance the night away. Local businesses supporting the event with raffle prizes include Marfa Meats, The Get Go, Cochineal, Convenience West, Margaret’s, the Big Bend Fungi Company, Aster, and Marfa Maid Dairy.

Local painter Julie Speed has donated ten signed posters of her painting, The Rights of Sperm, to Monday’s fundraiser. The painting — a play on the Stravinsky ballet The Rite of Spring — was a gut reaction to a 2019 abortion law passed in Alabama that was the strictest of its kind at the time. “It kind of set my hair on fire,” Speed said. “I am old enough to remember when there was no access to abortion healthcare for women. I never thought that these laws would stand or that Texas would also follow suit.”

Speed is an avid follower of current affairs and often listens to the news while she works, but tries not to make overtly political statements in her paintings. Issues facing women, however, strike a special nerve — around the same time as The Rights of Sperm, she made another piece critical of the Supreme Court called Odalisque, Armed. “They’re an attempt at angry humor,” she explained.

The collage shows a woman on a bed wrestling with a man in judge’s robes, a visual reference to allegations of sexual assault against Supreme Court justice Brett Kavanaugh. The figures are positioned almost identically to Artemisia Gentileschi’s Judith Slaying Holofernes, a famous Enlightenment-era painting. “I usually try not to be ham-fisted or didactic, but when I get pressed, I do it anyway,” Speed said. “The pieces turn out didactic because I mean them that way.”

For Monday’s fundraiser, she teamed up with local printmaker Mary Lou Saxon to make a limited run of posters. The prints are signed and set on high-quality Hahnemühle paper. So far, 45 other businesses and artists have signed on to support the event, which will be held at El Cosmico next Monday, August 1, starting at 6 p.m. For more information, you can find the Big Bend Reproductive Coalition on Facebook and Instagram.