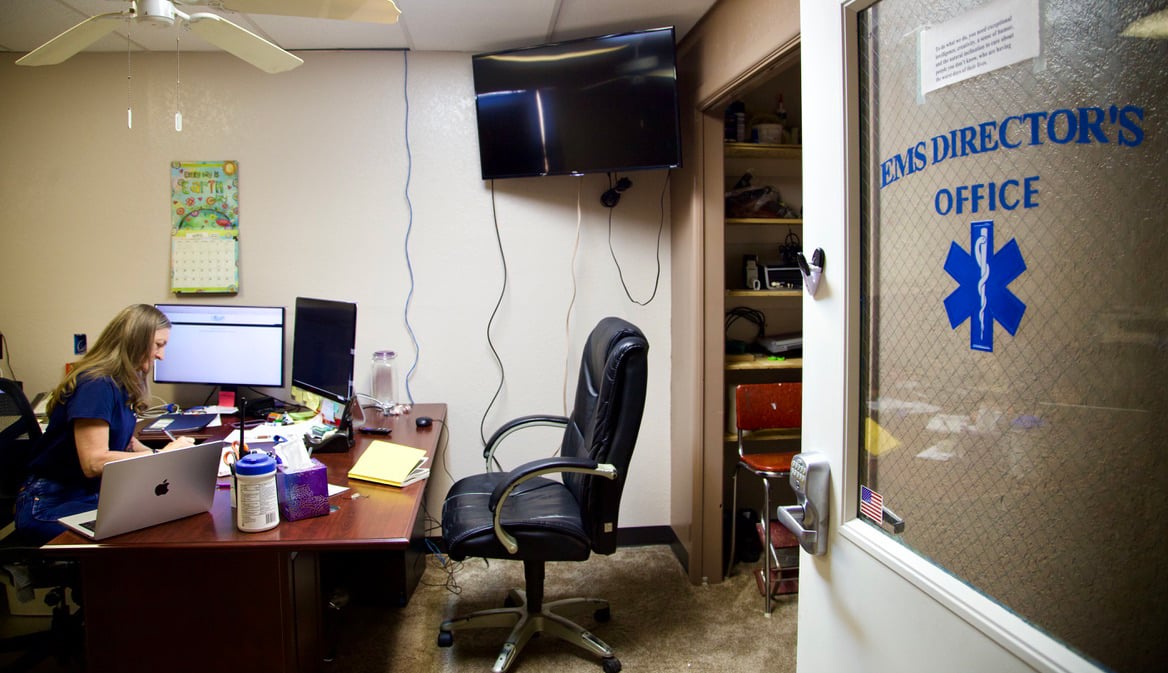 Jeff Davis County EMS Director Vickie Fowler is in the process of stepping down from her role to make way for a newly-appointed director who will officially take over in December. Photo by Mary Cantrell.
Subscribe

JEFF DAVIS COUNTY — Jeff Davis County has appointed a new EMS director to lead their volunteer-run “Mountain Medic” service, Peggy Fonseca, who is in the process of transitioning into the role and should be fully in place by December, if not sooner.

The county launched their search for a new EMS director around six months ago after Vickie Fowler, who served in the role for over 13 years, announced she’d be retiring this June. Fowler is not yet fully-retired, but is primarily working on administrative duties from home while existing EMS crewmembers Sandra Billingsley and Jim Chandler act as assistant EMS director and operations manager respectively.

“I’ve got competent people that have been here for a long time. So they’re familiar with how we run everything and what needs to be done,” said Fowler. “That takes a huge load off.”

Jeff Davis County is the only volunteer-run service in the tri-county area, with all certified EMTs and paramedics donating their time. The EMS director is the only salaried position and is paid for their administrative duties by the county, but not to go out on 911 calls. The director is essentially in charge of all aspects of running the emergency service, from scheduling EMT shifts to keeping drugs and ambulances in compliance with state regulations.

Fowler said the county initially struggled to find a qualified candidate to take over the position, but finally found Fonseca, who turned out to be a good fit and brought years of experience running EMS services, a familiarity with state regulations and requirements and the skill of grant writing to the role.

“She has a really broad range of skills and talents that are going to be so valuable to EMS and the county. We’re really excited about having her on board,” said Fowler. “We have somebody more qualified than we were even hoping to get.”

Fowler said the months-long transition period will consist of integrating Fonseca with EMT crews, conducting training sessions and more. Fonseca is already using her grant writing abilities to help the county apply for a Community Development Block Grant for new cardiac monitors and power load systems for their ambulances.

“Her enthusiasm is very refreshing. She’s already so capable that the transition is going to be pretty seamless,” said Fowler. “Helping us do these grants that are coming up that we’re finding has just been invaluable to the county.”

Fowler previously stated the future of the Mountain Medics would rely on their ability to move away from relying solely on volunteer efforts, transforming into a hybrid or fully-paid service. She said the idea is still being considered and their new initiatives to host more training programs for locals are a step in the right direction. She said she hopes in the future Jeff Davis County EMS can recruit local high schoolers and give them careers as EMTs or attract younger workers that can help move the service forward.

“We definitely need young people in the agency because we are all getting older, and [their] enthusiasm would be perfect for this and make the transition a lot easier as well,” said Fowler.

The department is also in the process of building a station bunkhouse with bedrooms and a community kitchen to offer a space for on-call EMTs to hang out, which they have come close to completely funding and expect to move on soon, said Fowler. Jeff Davis County’s remote location and lack of affordable housing were previously mentioned as potential challenges to overcome when finding a qualified candidate for the EMS director role, but Fowler said West Texas worked its magic on Fonseca, who will be moving from the San Antonio area, and she’s following up on some promising housing leads.

“The more she was here, the more she just loved the peace of the mountains and the beauty. It just, like it did for a lot of us, kind of grabs you by the heart and hangs on,” said Fowler.

Fonseca did not return a request for comment by press time.