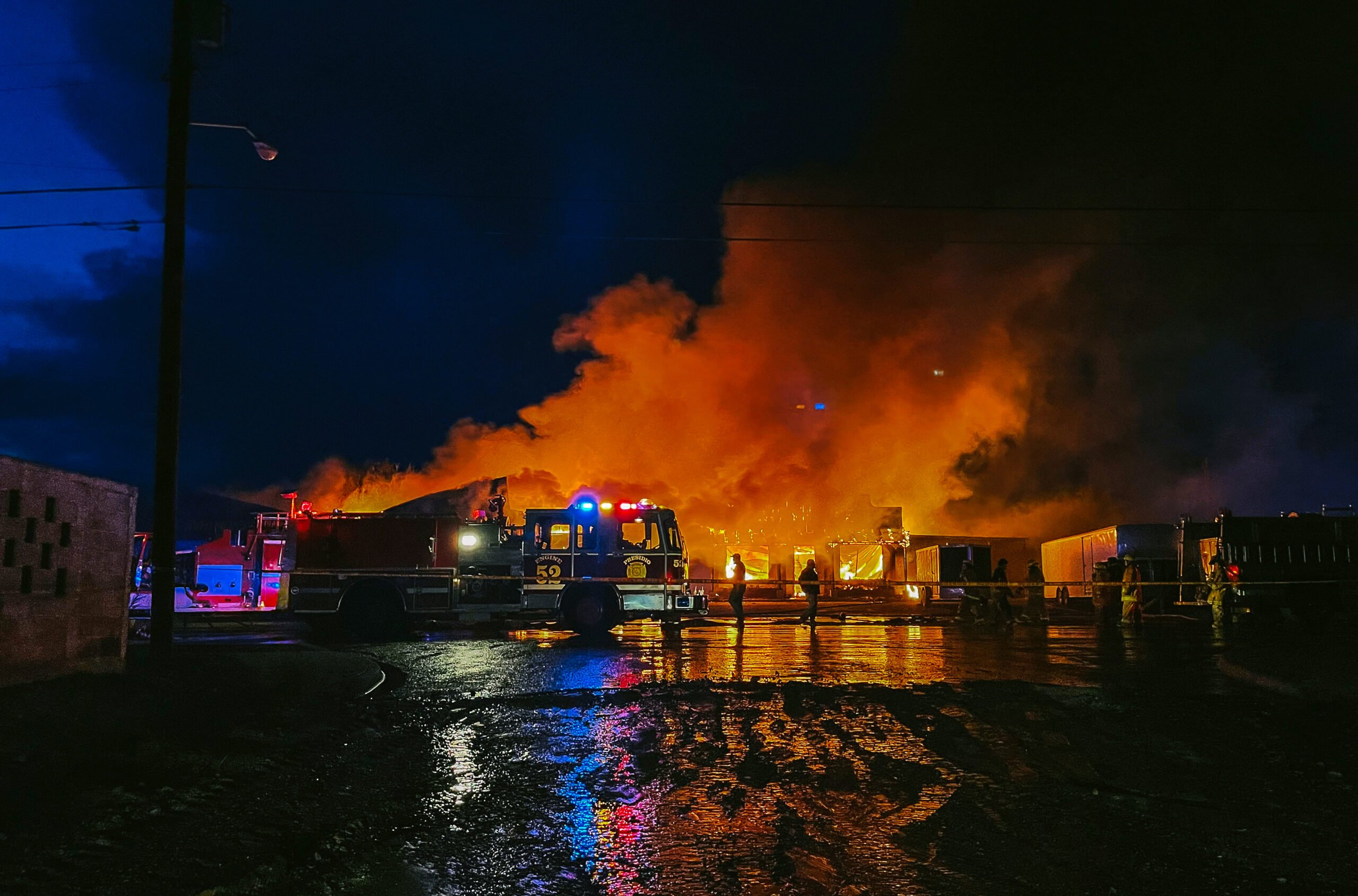 PRESIDIO — Around 8 p.m. last Wednesday night, a fire broke out in Presidio near the corner of O’Reilly Street and Ojinaga Avenue. Multiple agencies responded to the blaze, which resulted in a total loss of property for NAPA Auto Parts and Santa Fe Cabinets. For days, dark smoke rose from the buildings as local firefighters worked to control the flames.

Mayor John Ferguson arrived on the scene around 30 minutes later after receiving a call from Saul Pardo, Presidio’s fire chief. Pardo was out of town, attending a training at Texas A&M. Panicked, the mayor took to social media. “I was like, ‘Oh, my goodness, who’s even here?’” Ferguson recalled. “We did have a few people turn out from our volunteer fire department and they worked super hard.”

Presidio has an agreement with the volunteer fire department in Ojinaga that allows the mayor of either town to make a distress call to the other and pool the resources of both departments. While it’s typically the Bomberos Voluntarios de Ojinaga who cross the border to help Presidio’s Volunteer Fire Department, the agreement is intended to protect both cities during an emergency.

Ferguson sounded the alarm around 8:30 p.m., and the Ojinaga fire crew responded quickly. “They were here within 10 minutes,” he said. “For them to get here that quickly was really impressive.”

Comandante Sergio Urias, Ojinaga’s fire chief, said most of their response time was spent waiting on the bridge to go through customs. “When crossing the bridge you lose some time waiting to enter the country,” he explained.

Urias led a crew of eight volunteers to the scene. By then, most of Santa Fe Cabinets and a storage building used by NAPA were engulfed in flames. Both the Presidio and Ojinaga fire departments were soon joined by Presidio EMS, Customs and Border Protection, Texas DPS, and the Marfa Volunteer Fire Department.

Ferguson kept everyone at home updated through Facebook. “They all had to be exhausted,” he said of the hardworking first responders. “I was exhausted just standing there!”

Gary Mitschke, Marfa’s fire chief and Presidio County’s emergency management coordinator, got to the scene as quickly as he could. The Marfa Volunteer Fire Department arrived around 10:30 p.m., at which point Santa Fe Cabinets and the NAPA storage building were destroyed and the main NAPA storefront was starting to catch fire.

Mitschke speculated that the building’s metal walls prevented it from being the first building to catch, but that the cause of the fire was likely to remain a mystery. “There was so much damage, they may not be able to pinpoint the location — at this point, they’re going to have to interview people who got a visual on it before it got completely destroyed,” he said. “That is the only way you’re going to get close to pinpointing where the fire started.”

Urias, who arrived on the scene two hours earlier than Mitschke, agreed. “It’s hard to know exactly where it started, because by the time our team arrived there was already a lot of fire,” he said. Photos provided to the Presidio International by the Bomberos Voluntarios de Ojinaga, taken around 8:45 p.m., show both Santa Fe Cabinets and the NAPA storage building ablaze.

Presidio Fire Chief Saul Pardo described the fire as a “total loss” of all three buildings. Three Presidio firefighters were checked out by EMS, and one Ojinaga firefighter was transported to Big Bend Regional Medical Center but has since been released. “We don’t know if its smoke inhalation, dehydration, heat exhaustion — it was a pretty hot environment, being exposed to that,” Pardo said.

In the past week, the community has banded together to try to help Rene Morales, the owner of Santa Fe Cabinets. The neighboring NAPA Auto Parts was insured, but Morales’ shop was not. He estimates that he lost $60-70,000 in the fire. “We lost everything, we don’t even have a single screwdriver. We lost the down payment, we lost the advance payments, we lost materials. All our profits went to ashes.”

Osvaldo Acosta, the owner of Rio Grande Wrecker Services just across the alley from Morales’ shop, started a GoFundMe for his neighbor. “Mr Morales lost everything in the structure and also doesn’t have insurance for repairs, so any donation is greatly appreciated,” Acosta wrote. At press time, Acosta had raised $1,500.

Morales reported that Presidio residents had responded with creative ways to help even when money was tight — he’s also received donations of tools and time. “All my friends are saying, if you’re going to build another shop just let us know, if you get a piece of land just give us a call and we’ll help you out. We can’t help with money, but we can help with labor.”

Jeran Stephens, executive director of the Presidio Municipal Development District, was quick to act. With the help of her board, she was able to offer three weeks’ pay to all four employees of Santa Fe Cabinets and will continue to offer support and counseling to help get them back in business. “Our small businesses are the lifeblood of Presidio and their employees are the backbone of our community,” Stephens wrote in a press release.

Mayor Ferguson agreed. Morales has done work for a number of local clients, including big names like the Lajitas Golf Resort. Ferguson believes his kind of handiwork is what makes Presidio-made products special. “That’s exactly more of what we need in this community,” he said. “[Morales] has got these clients looking for high-end stuff. I’m really hopeful that he can get going again because people gave him advanced money to go buy the lumber for projects they wanted and then it went up in smoke.”

At Monday night’s Presidio City Council meeting, Presidio Municipal Judge Viviana Cataño informed the public that the office of the Texas State Fire Marshal had already begun their investigation into the fire and its causes. “They’ve been in contact with us since Thursday,” she reported. The Presidio International will continue to follow these developments.

To donate to the GoFundMe for Rene Morales, visit https://www.gofundme.com/f/rene-morales-santa-fe-cabinets.