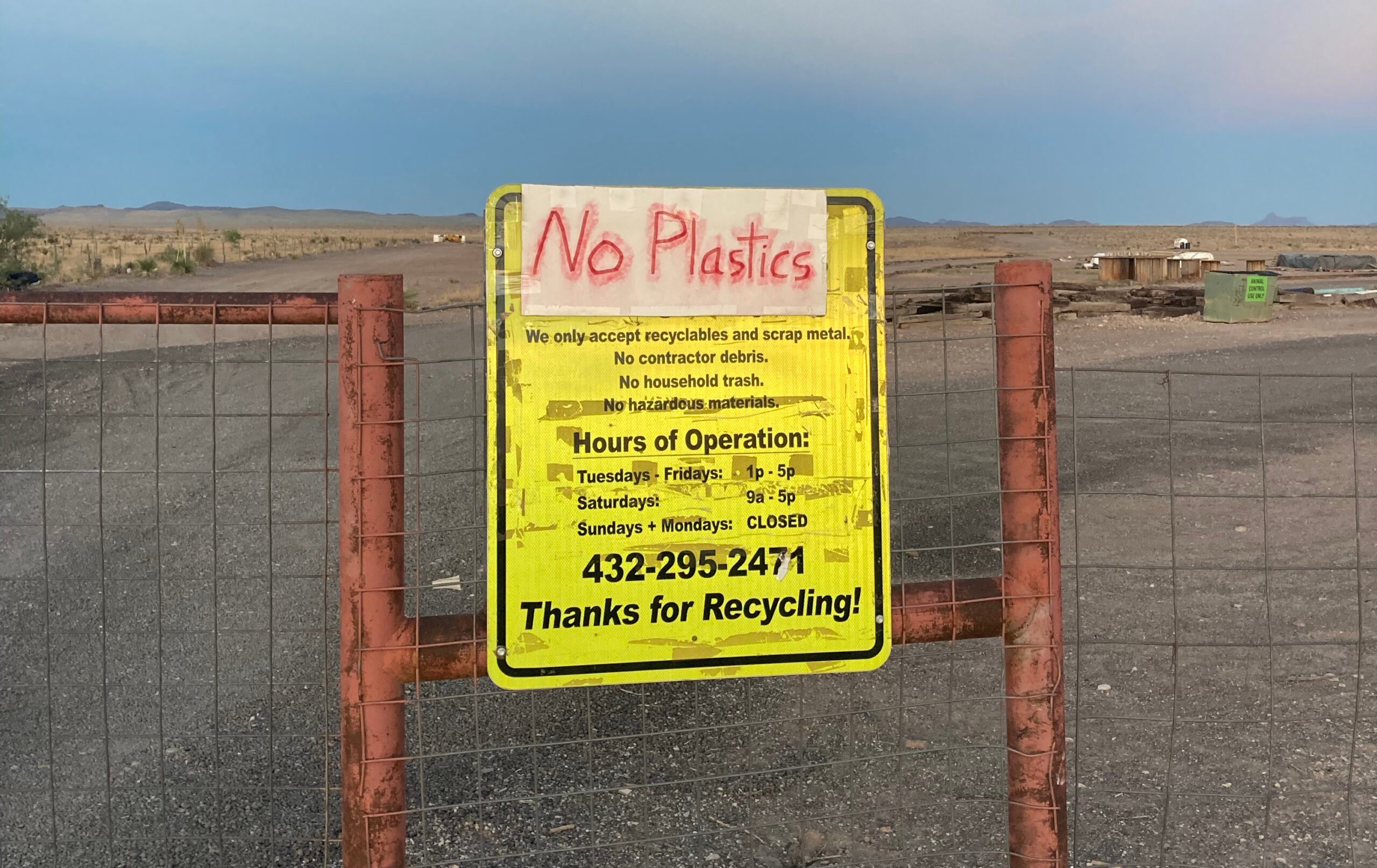 MARFA — The Marfa Recycling Center has suspended its acceptance of plastics, a temporary measure brought on by shifts in the global economy of recycling, according to the city’s recycling supervisor.

Surrounding recycling centers that would normally take Marfa’s materials are not currently accepting plastics, explained Villareal — previously, Friedman Recycling in El Paso took Marfa’s plastics, he said, but when he called them recently about taking the accumulated materials off his hands, he learned the center there had changed hands. When he called the company that accepts Marfa’s cardboard and paper products, he was told it wasn’t interested in plastics.

Villareal made calls to other recycling companies, but had no luck — ”It’s all the same story,” he said. “It’s not one place, it’s all over.’

Now, the Marfa recycling center has about 14 bales of plastics it needs to offload — a relatively small amount, said Villareal, considering those have piled up over the last nine months. He estimated about 75% of the products that wind up at the center are cardboard, with plastics comprising a fairly small percentage of the output.

Put simply, plastics are not currently profitable, and if they can’t be sold for a profit, recycling companies aren’t interested in taking them — then there’s the matter of arranging transportation from a remote location like Marfa.

But Villareal and the City of Marfa are currently in talks with Butts Recycling in San Angelo, the company that handled Marfa’s recycling pre-pandemic, in hopes of striking a deal. The company will need to come back to the city with a price for the pickup, ostensibly by Monday.

The values of plastic and other materials fluctuate, explained the general manager of Butts Recycling, and right now the plastics market is down — as of right now, the company is still accepting plastics, but they are hoping the market sees a rebound soon.

“It’s a commodity,” said General Manager Shawn Stine. “A lot of time it follows the petroleum market — if petroleum is going down, that goes down. It’s just a commodity, so it bounces around more than anything else.

“It’s tough,” he continued. “It’s getting low, and hopefully it’ll bounce back, but sometimes when it gets low, it’ll be hard to move it. It takes money to process it.”

Villareal noted the recycling industry was thrown into upheaval several years ago when China, once the largest buyer of plastics from the U.S., stopped accepting most plastics. Recyclers in the U.S. then had to find buyers; a lot of plastics ended up in landfills.

Stine confirmed that Butts Recycling is currently in talks with Marfa to see if the company can help the city out.

In the meantime, Villareal made the decision to stop taking any more plastics to avoid a pile-up. “I did not feel it would be feasible to stockpile plastic when I have no idea when anyone would ever pick it up in the future,” he said.