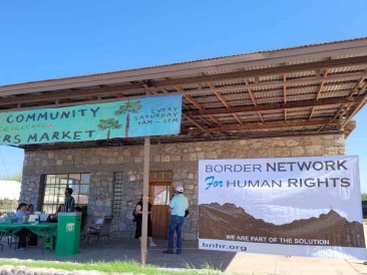 PRESIDIO — Last weekend, El Paso’s Border Network for Human Rights (BNHR) hosted an event at the Presidio Farmers Market to help connect locals with information about human rights and immigration issues. The Presidio event was presented in solidarity with marches in El Paso, Pharr, and Brownsville by a network of activist organizations including BNHR, Frontera Texas, Proyecto Libertad, and Border Workers United.

There wasn’t a march in Presidio — Saturday’s event was aimed at spreading awareness of BNHR’s mission. BNHR is hoping to have more of a presence in the small border city, and is currently looking for office space and potential employees. A handful of locals have signed on to attend training through the fall.

The actions in El Paso and other border communities, however, were intended to protest Operation Lone Star, Governor Greg Abbott’s surge of funding and law enforcement to border communities. “For the first time, multiple border cities and counties unite to condemn Gov. Abbott’s Operation Lone Star, which is responsible for the migrant deaths along the border and the misuse of Texans’ money to fund anti-immigrant policies and operations,” BNHR’s Mynellies Negron wrote in a press release.

Though Presidio County has been receiving Operation Lone Star money for over a year, the debate over immigration policies has become more heated recently as County Judge Cinderela Guevara issued a declaration of “invasion” by undocumented migrants. Commissioner Brenda Bentley raised concerns about the use of that rhetoric at the last Presidio County Commissioners Court meeting.

At the meeting, Bentley reported that many constituents had written in to her decrying the use of the word “invasion.” “It’s the kind of language that incited what happened in El Paso,” she said, referring to the 2019 mass shooting committed by a gunman who believed his actions were combating a perceived “Hispanic invasion of Texas.”

The materials distributed at Saturday’s event echoed these concerns. “Immigrant advocates at the border will decry these policies and the dangerous spread of invasion rhetoric, which stokes fear and resentment, dehumanizes immigrants, and escalates violence, and will call for establishing humane immigration policies that welcome migrants in an orderly, just, and dignified manner,” Negron wrote.

One of the BNHR’s main outreach goals is helping people understand what their rights are when they interact with local law enforcement. A pamphlet titled “Know Your Rights!” outlines five steps when apprehended by an officer. “What you say to the police is very important, because what you say can be used against you,” the pamphlet cautions.

Though you may be required to show license, registration, and insurance in a traffic stop, folks apprehended by the police or Customs and Border Protection are not required to show proof of nationality or immigration status. The pamphlet advises to remain calm and respectful, but refuse to produce immigration documents or to submit to a search without a warrant, even if the officer threatens to enhance charges. “You can plead the charge later in court,” it says.

BNHR is planning to open an office in Presidio, and are looking for locals hoping to offer their services. Celia Arzaga, a Presidio resident who has a long history of advocacy work for rural and underserved schools in Ojinaga, is hoping to use her knowledge of both communities to keep neighbors informed about their rights. “It’s been one of my dreams to be a promoter of human rights, to make them known and put them into practice,” she said.

Arzaga believes that questions of citizenship and nationality are complex in a place like Presidio, where people are used to crossing the border frequently and having a life split between countries — traditional notions of citizenship don’t always apply. Her children are citizens; she and her husband are legal residents. “A lot of people have commented ‘I don’t want to renounce my Mexican citizenship,’” she said. “I tell them that when we come to this country for better opportunities, we are no longer going to think about ourselves, but about our families.”

Having families with mixed immigration status can provoke anxiety and uncertainty, especially when it comes to interacting with law enforcement. “I want to be that voice where I can change their way of thinking,” she said. “Whether we’re white, brown, short, tall, whatever we may be — we all have the same rights and we can help each other.”