MARFA — Wonder School Marfa, a newly-established kindergarten through eighth-grade “microschool,” welcomed the community this week for an open house in their space located on the ground level of the First United Methodist Church on Washington Street. The tuition-funded school will begin its first school year in about a month with 10 students enrolled.

As attendees stepped down a short flight of stairs and were greeted at the school’s entryway by sounds of children playing and gold letter balloons spelling out “WONDER,” some ditched their shoes in cubbies and opted to roam barefoot on the bright red carpet. From the entrance nook, a large room opens up, where antique fixtures diffuse warm light across white walls and wooden furniture give off a homey ambiance. A project to create an origami fox, the school’s mascot, was set out on a child-sized table.

This was the second public event for the school, the first being a preliminary meeting at the Marfa Public Library which took place earlier this April. Teachers, or “guides,” Emily Steriti, Sam Watts and Kristal Cuevas, who also serves as the school’s director, have been hard at work preparing their rented space for the upcoming school year.

Cuevas said the school’s early info session this spring gave the staff valuable time over the summer to take in parent and community feedback and refine their program. The school hosted a garage sale over the summer, which the community helped support with item donations, and with the addition of a student-run lemonade stand, the school raised around $1,000. The school is still seeking supplies to outfit their computer room, including a table, chairs, Google Chromebooks and headphones.

The school will have, in total, 135 instructional days, with a schedule of 8:30 a.m. to 3 p.m. Monday through Thursday, and Friday field trips once a month. Cuevas said field trips are still in the works but may include locations like the Judd Foundation, Chihuahuan Desert Research Institute and the Museum of the Big Bend. Their school year is set to start on September 12 and end on May 25. The school will meet state homeschooling guidelines for its education requirements and will track attendance. Wonder School is not yet an accredited institution but might explore that possibility in the future, said Cuevas.

Tuition for the Wonder School is $400 per month per child, with a 20% discount for siblings and a $200 registration fee. Cuevas said the school’s goal is to eventually become completely tuition-free, and they are working on becoming a nonprofit organization, which will open up more funding opportunities in the future.

At Monday night’s open house, families already enrolled in the program showed up to hang out and enjoy refreshments, and a handful of new visitors also came through the space. The church ground floor the Wonder School is now occupying once served as a Montessori school years prior. It consists of a main community room outfitted with a piano and numerous Montessori-inspired learning stations centered around practical skills, geography, language learning, and more. Rooms including a kitchen, library-slash-yoga room, bathroom, computer room and office space stem from the main room.

Cuevas said Wonder School wanted to host an open house in order to invite the community to view the new school space and ask questions. They timed the event before the start of Marfa ISD’s school start date, August 17, in case some parents were still weighing their options, she said. While their school might not be the best option for everyone, said Cuevas, Wonder School is able to offer something unique — a hybrid focus on academics, life skills and spending more time outdoors.

“When I speak to parents about that, it’s focusing on all of the great things that we’re able to provide instead of having this strict regimented routine of subject to subject to lunch to recess and all of the time in between that maybe gets lost. We are packing our day with full-on learning in a very different way,” said Cuevas, whose two children will be attending Wonder School.

Parent Stela Fuentez, who enrolled her two children, Amaya, 8, and Roman, 6, in Wonder School for the forthcoming school year, said their family was attracted by the program’s emphasis on tactile learning and mindfulness. They also wanted to continue their children’s education with Steriti, who her children had previous positive experiences with at MISD in the Montessori program. (As of the 2022-23 school year, MISD no longer offers any Montessori courses.) 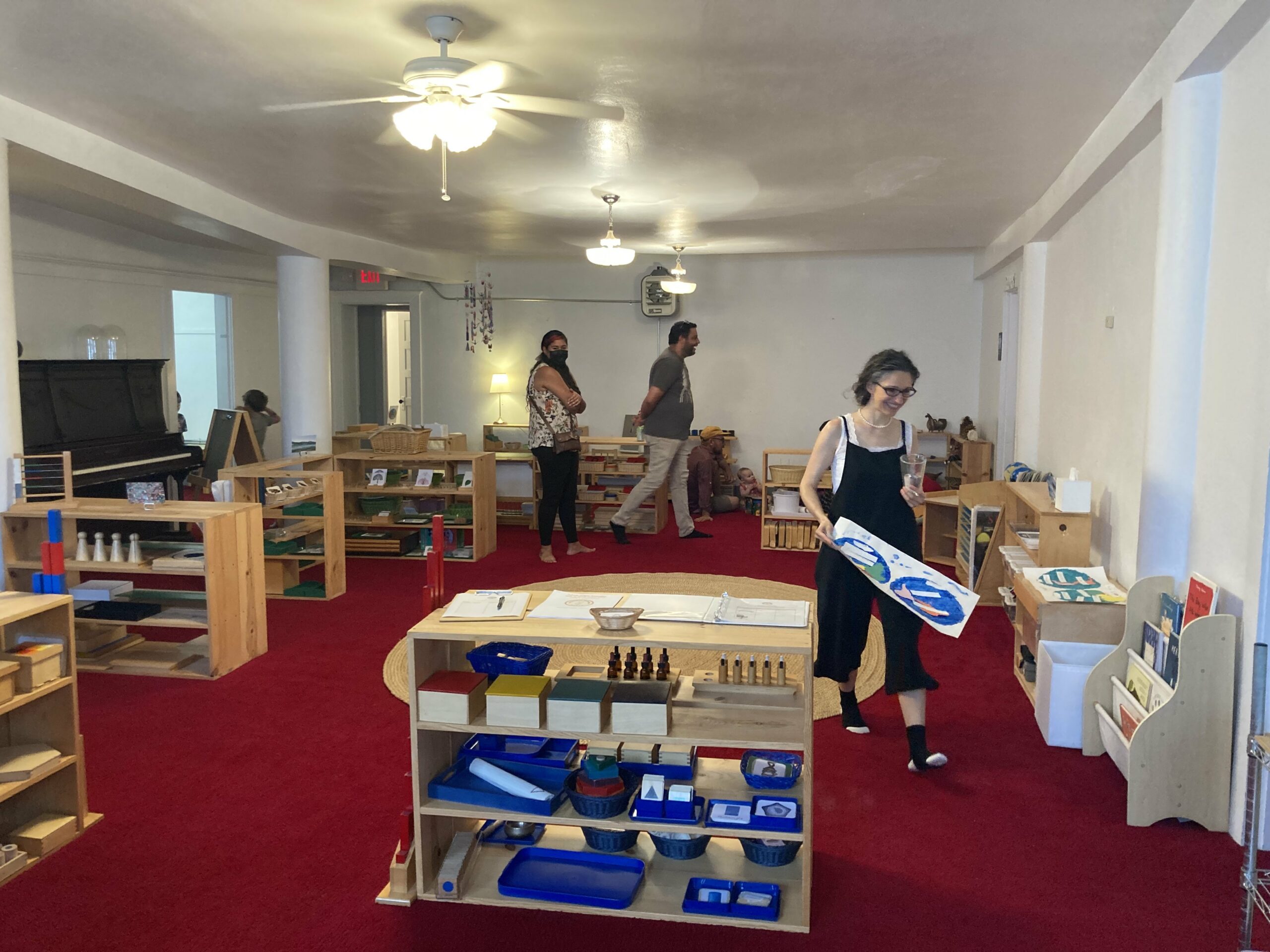 “We’re really excited about this opportunity for Marfa,” said Fuentez. “Emily and Sam both do this for the love of the children. They really do. You can see it, they would do this for free. And that’s what we want it for our kids to feel that energy and that passion they have in the philosophy that they carry.”

Steriti previously founded the independent nonprofit Marfa Montessori, which operated for a few years before being incorporated into MISD in 2013. Looking ahead to the coming school year, she anticipates being challenged by educating a large age range of students and stepping outside of the strictly Montessori mindset. She said she was expecting more people to reach out to her who were curious about the Wonder School, but so far she hadn’t heard from anyone. However, she said she is excited for the start of the year and hopes the school is successful.

Cuevas said the school is still hoping to attract a few more pupils, but regardless of enrollment numbers, she and her team are proud to be offering an alternative to traditional public school for local families looking for different educational routes.

“What matters is that those few families that want this are able to have it because we have a space and we have amazing guides that are putting their heart and soul into it despite [the fact that] we’re so new,” said Cuevas. “We are on a shoestring budget. There’s very little right now, but we’re willing to work, we’re willing to do the hard work necessary to fundraise and to put our name out there and to establish ourselves as a school just to offer that option.”

“It’s just a personal choice that parents have to make in this community. I’m just glad that there are options, and that there isn’t just one singular route to take,” added Fuentez.

Due to the coronavirus pandemic and families homeschooling their children in the wake of repeated school closures, many, including Cuevas and some of her fellow Wonder School Marfa families, came out of the experience rethinking the role and format of a formal education, she said.

“One of the silver linings of the pandemic is that we’ve been given permission, confidence and ways to take an alternate route and kind of see where that leads us,” said Cuevas.

The school’s daily schedule will consist of online learning in the morning for the two older children, ages 10 and 12, and hands-on project-based learning for the younger students, ages 5 through 9. The afternoon will consist of various “enrichment” activities including library time, art and music making, lunch and playtime outdoors, cooking, Spanish language learning, and more. There’s also a plan in place for the two older students to accompany a Wonder School parent on their weekly Meals of Wheels delivery route.

“What is beautiful about this alternative program is that we can change things if we see there’s a need for change. We can be flexible, we can see what the kids are interested in then follow that,” said Cuevas.

The online learning platform the school was previously considering utilizing, Prenda, is no longer a part of the school’s programming. Instead, the school staff has opted for a combination of programs they deemed equivalent including Khan Academy, IXL Learning, and Spanish in Nature.

The Wonder School will seek to foster an environment with parent involvement, asking each family to donate 20 hours of time annually to a school-related fundraiser, project or classroom time. All parents are invited to chaperone and attend Fieldtrip Fridays. Cuevas said she already has projects in mind that would be aided by parent and community assistance.

“The playground in the back, it’s basically all dirt, one tree, very little shade and zero place to sit down. We would love to make that into a fun Saturday project and invite not only parents but community members to give their time and maybe their skills or supplies to establish a more beautiful play space for the kids outside,” said Cuevas.

Wonder School will continue to get the word out about their establishment, said Cuevas, and will have a children’s arts ‘n’ crafts station run by Watts at the Trans-Pecos Music Festival as well as participate in the Marfa Lights Parade. Cuevas said she has been in conversations with individuals who worked closely with Marfa’s defunct International School, which operated from 2013 to 2016 and closed citing financial issues, who shared advice on how to ensure the school’s longevity, but for now she is taking one day at a time. While the Wonder School is still getting its wings, it will hopefully grow to draw in others, like Marfa families who send their kids to Alpine Montessori School, said Cuevas, but she understands that some may be hesitant to try something new.

“I want people outside of Marfa that want to move to Marfa but have kids, I want to give those families another option,” said Cuevas. “There might be some families out there that want to see it just get started the first year or so and then they’ll make their decision.”

Fuentez said she believes in the staying power of the program and one of her main goals is to help make Wonder School available to everyone in the community — hopefully offering full scholarships down the road.

“It’s going to attract more folks to come and be part of the community and really embed themselves instead of just being the weekend residents. Come in and bring your kids — there’s wonderful opportunities here,” said Fuentez.

wonder school marfa
Stay in touch with The Sentinel
Related