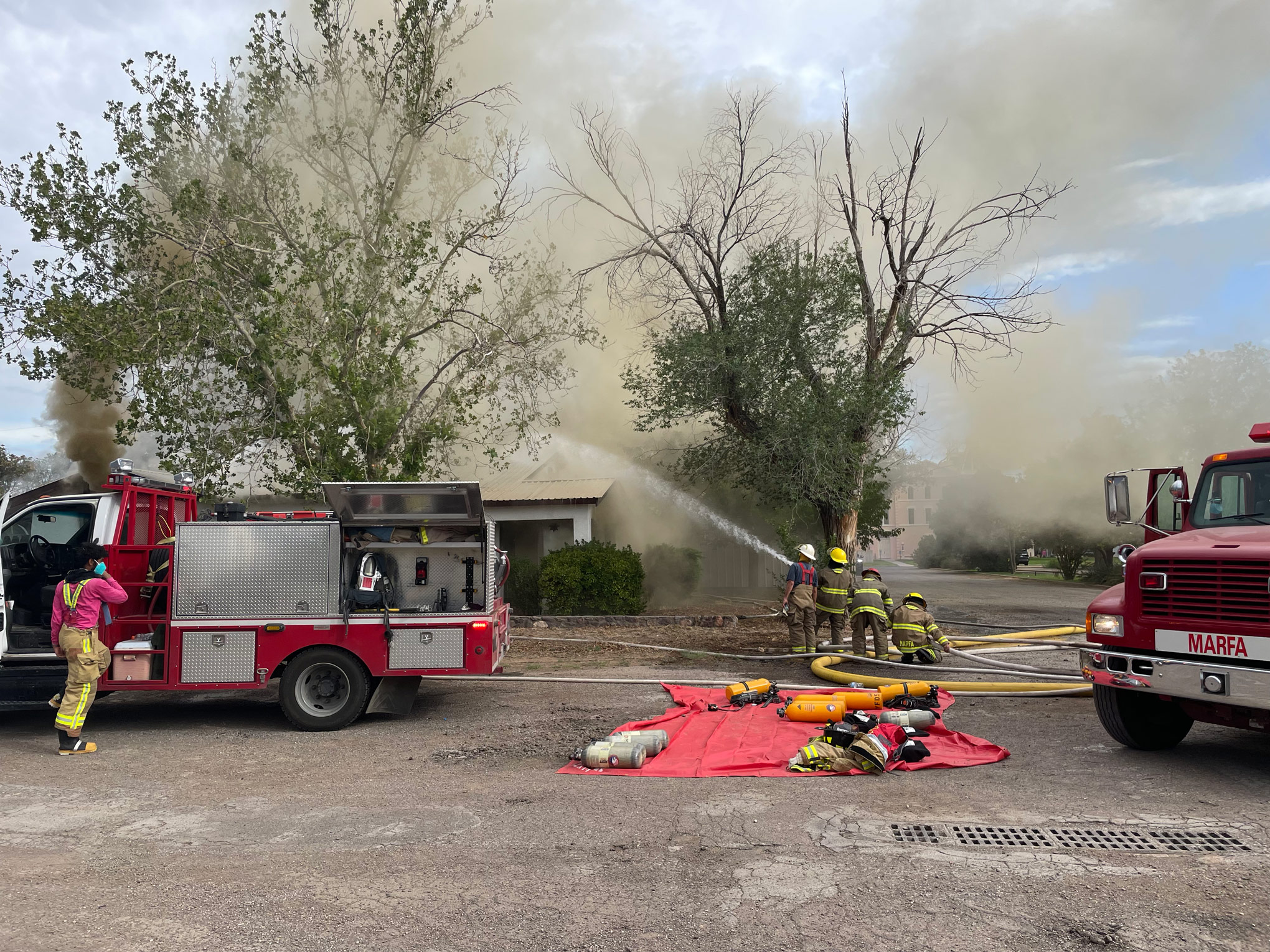 MARFA — A fire broke out at a Highland Street home on Thursday afternoon, largely decimating the interior and the roof, though the structure remains standing. Still, Marfa Fire Chief Gary Mitschke estimated the extent of the damage he saw amounts to a “total loss.”

“I think the house is a loss, in my opinion, with the roof gone and a lot of smoke and heat damage on the inside,” said Mitschke. “I didn’t see anything on the interior that I thought didn’t receive some kind of damage from smoke or heat or water.” The structure, though still standing, has been rendered unstable, he added

Before the house itself caught fire, an individual renting a casita on the property had been burning items in the home’s fireplace — but the house fire was ignited in the attic, above the fireplace, due to a faulty chimney, said Mitschke. That was the conclusion of an investigator with the Texas State Fire Marshal’s office who assessed the site on Tuesday morning, he said, though the Marshal’s office won’t have an official report complete for several weeks.

A split in the metal pipe chimney attached to the fireplace, which runs through the attic, allowed the chimney contents to escape, said Mitshcke.

The Marfa Volunteer Fire Department received word of the fire around 4:30 p.m. and arrived on scene shortly after to see smoke billowing out of three roof openings. The firefighters were battling the flames for hours and didn’t leave the scene until after 2 a.m. 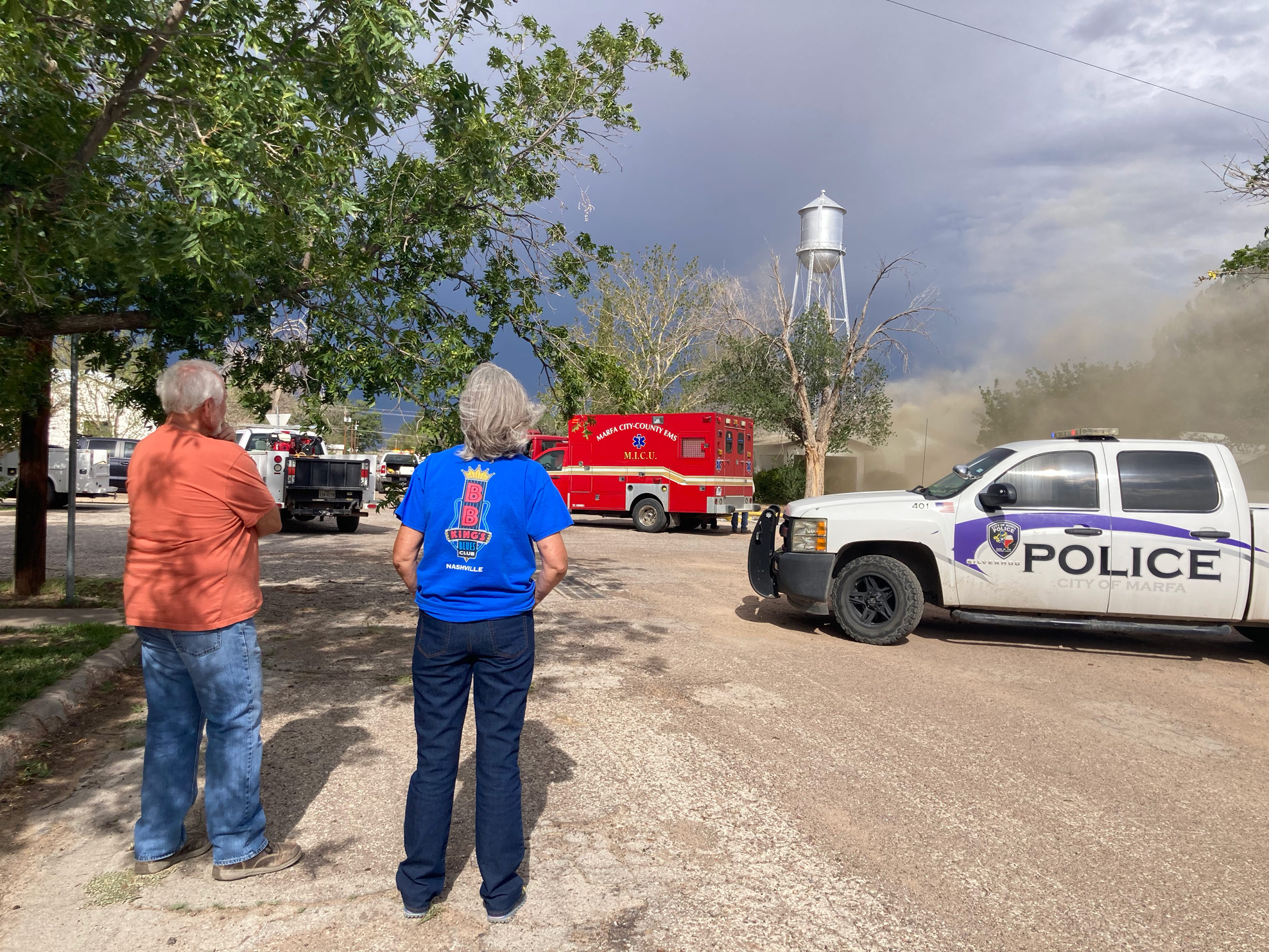 Joe Morales and Mary Joan Webb watch last week as volunteer firefighters work to put out a fire which started at the home next door to them on Highland Avenue. Staff photo by Mary Cantrell.

The Marfa Police Department, Presidio County Sheriff’s Office, Marfa EMS and the City Gas Department showed up to assist the fire department, and some local residents dropped off refreshments for the first responders. Neighbors Joe Morales and Mary Joan Webb, who first notified authorities of the incident, watched as crews worked to put out the fire from a safe distance across the street.

The home’s owners, Doug and Paige Pecore, were “devastated and heartbroken” by the loss — many of the items lost in the blaze held personal significance for the couple. “It’s all hand-done,” said Paige. “The dining table was hand-made by Doug.” A mere 72 hours before the fire broke out, Doug had newly refurbished the bathroom.

“It is heartbreaking,” said Paige, who was quick to add, “It is just stuff.” But some of the items lost were sentimental in nature and truly irreplaceable, she said. The couple used to own the now-shuttered bar Padre’s — along with David Beebe, Democratic candidate for Presidio County commissioner, Precinct 4 — and the Highland Street house had showcased framed posters of the bands that had played there.

Paige said Doug was at the site on Wednesday to assess whether any items inside the home can be salvaged.