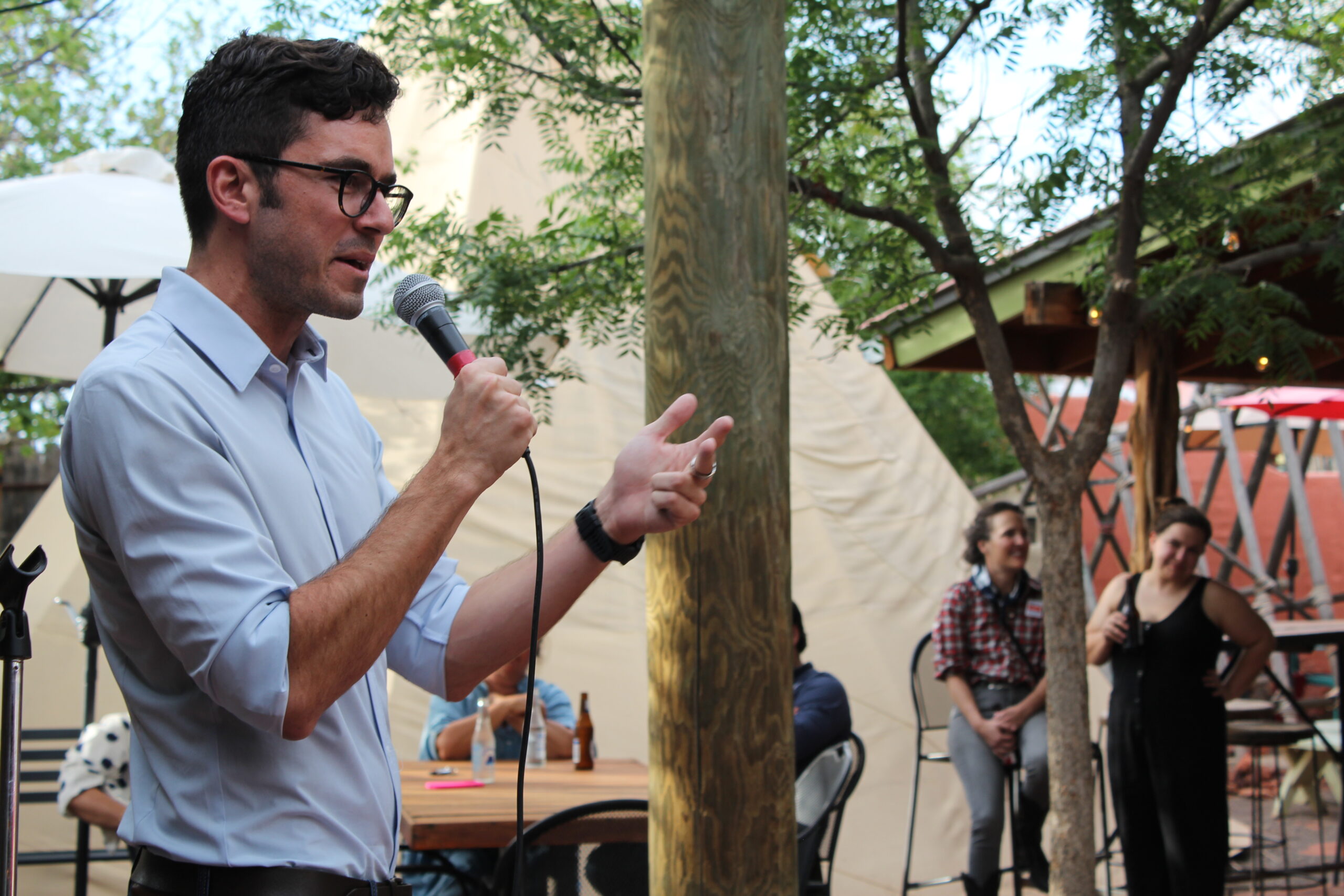 At 33 years old, Warford is the youngest candidate on the ballot this November and the youngest to run as a Democrat for statewide office in over 30 years. The hundreds of deaths caused by widespread grid failure during Winter Storm Uri in 2021 inspired him to run for office.

“The Texas Railroad Commission could have prevented what happened last February,” he said.

Back in 2011, a winter storm cut out the lights for over four million Texans. Multiple outside investigations were launched into these widespread grid failures, and Texas’ energy providers were given a set of weatherization recommendations. “It was the Railroad Commission’s job to make those rules and enforce them,” Warford explained. “They didn’t do it, whether out of corruption or incompetence.”

Warford has hit the campaign trail via train to spread the message that, despite its name, the Texas Railroad Commission hasn’t had anything to do with the railroad for almost a century. The state agency was originally started in 1891 to prevent railroad monopolies from forming, and when the oil and gas industry took off in the early 20th century, the commission’s duties shifted to serving the same function for the state’s energy producers.

In its contemporary form, the Railroad Commission has a much wider set of responsibilities. “Despite being misnamed, the Texas Railroad Commission actually regulates the Texas oil and gas industry — that makes it one of the most important elected offices in the state, for our economy, for our environment, and for our ability to keep the lights on,” Warford explained to the crowd.

There have been numerous attempts from both sides of the aisle to change the Texas Railroad Commission’s title — most recently, in 2015’s legislative session. Such proposals were “victims of a mix of nostalgia and concerns about unintended consequences,” per the Texas Tribune. Warford thought the failure of these proposals was intended to keep the actual business of the Railroad Commission out of the public eye. “Literally, there are people benefiting from the confusion,” he said.

This spring, Warford ran unopposed in the Democratic primary. The Republican primary was more eventful than usual this year. Candidate Marvin Summers was killed in a car crash just before Election Day and still took home 12% of the vote. Sarah Stogner, an oil and gas attorney, posed mostly-nude for a campaign ad that won her a run-off against incumbent Wayne Christian.

In November, Warford will be facing off against Christian, a Grammy-nominated gospel singer and former state lawmaker who has served on the Railroad Commission since 2016.

Warford decided to stop in Marfa on his way to the Permian Basin even though the region’s voter base isn’t that large. “I’m a ‘campaign everywhere’ kind of person,” he told The Big Bend Sentinel.

Marfa residents were appreciative of the effort and engaged in a lively back-and-forth.

The candidate’s answer tied into a larger criticism of his own party. “One of the things that frustrates me about Democrats is that we’ve let the Republicans create this false pro-oil and gas narrative. We as Democrats end up being portrayed as against an industry that employs thousands of people,” he explained.

He pointed out that top climate scientists urging the public toward measures like electric vehicles and solar panels acknowledge that the oil and gas industry won’t become obsolete overnight. “The question on the [oil and gas] industry is how do we make it cleaner and safer,” he said.

Warford was also vehemently opposed to the industry’s use of eminent domain to secure land for pipeline construction. During the construction of the controversial Trans-Pecos pipeline in 2015, the issue of eminent domain became a hot topic in the region on both sides of the border. “We shouldn’t steal peoples’ land and give it to major corporations and billionaires,” Warford said.

Despite the — as Warford puts it — “reputation problem” his party has among folks in the oil and gas industry, he was excited to be running on the same ticket as Beto O’Rourke and other energized, high-profile Democrats. “We have genuinely the strongest statewide ticket that we have had in decades, and this fall, we’re gonna win,” he said.

The only pushback faced by Warford on this leg of the campaign trail was a comment by Fields: how could he expect to appeal to West Texans in well-oiled, out-of-the-box cowboy boots? Warford took the criticism in stride. “I mean, I live in the city and these are city boots!”

Though Warford’s opponent doesn’t have a planned campaign stop in the Big Bend yet, he sent a brief statement to The Big Bend Sentinel. “It has been the honor of my life to serve as our state’s 50th Railroad Commissioner,” Christian wrote. “If re-elected, I look forward to continue fighting for cheap, plentiful, and reliable energy for all Texans. I will fiercely defend against the Biden Administration’s efforts to shut down oil and gas production in Texas which would kill jobs, harm our economy, increase costs to consumers, and reduce the reliability of our grid. Oil and gas production and a clean environment are not mutually exclusive, and we must continue to preserve Big Bend and our state’s numerous ecological treasures.”