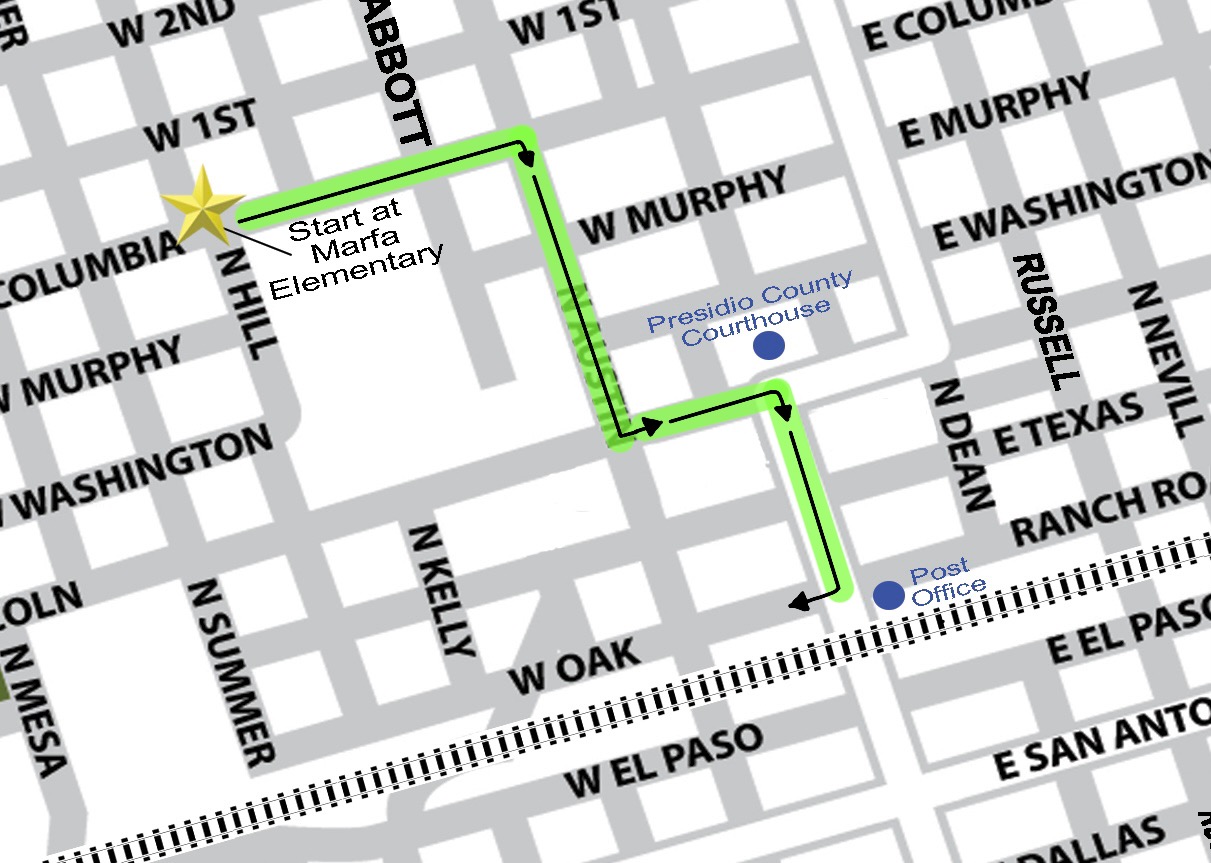 The Marfa Lights parade route. The parade will take place at 10 a.m. on Saturday, September 3.
Subscribe

MARFA — Music, food and merriment will fill the Presidio County Courthouse lawn and downtown streets of Marfa this weekend as locals and visitors gather to celebrate the 35th Annual Marfa Lights Festival.

The event — which is free and open to the public — will be back for three consecutive days this year with activities and performances taking place from Friday, September 2, to Sunday, September 4. Around 50 vendors, ranging from local restaurants and business to organizations and parks, will populate streets lining the courthouse, and new and returning musical acts will take the stage throughout the weekend.

“It’s going to be a great showcase of this region,” said President of the Marfa Chamber of Commerce Abby Boyd. “It’s just a great opportunity to meet the people who are doing all this important work in our area and for them to connect with our community members.”

Boyd estimates around 3,000 people showed up for last year’s festival, which was back after being canceled in 2020 due to the pandemic. This year, COVID was still on the mind of event organizers — but because Marfa Lights is an outdoor event, said Boyd, people should be able to participate in festivities safely.

“We just want everyone to act really responsibly to keep our neighbors safe and come together and enjoy this incredible town and this historic milestone event,” said Boyd.

This year, organizers are keeping their fingers crossed that the weather cooperates, but if rain becomes an issue festivities will move to either the USO or MAC Building, said Boyd. The Marfa Lights stage will be situated facing the courthouse so that the audience will view performances on the courthouse lawn under the shade provided by the trees.

“We’re trying to think of everything that will keep our audience comfortable and happy and give them no reason not to come,” said Boyd.

The first iteration of Marfa Lights took place back in 1987 with the goal to entertain the local community and draw people who have moved away back for a visit. The festival serves the same purpose to this day, said Boyd, focusing primarily on local residents as opposed to tourists.

“The whole mission behind this particular festival is for our local community,” she said.

The Marfa Lights Parade will take place at 10 a.m. on Saturday morning, starting at Marfa Elementary School and making its way down to Highland Avenue. The grand marshal for the parade will be Jo Ann Rodriguez Betancourt, tribal chair of the Jumano Nation of Texas, who will be sharing information about the Jumano culture at the Big Bend Conservation Alliance booth throughout the festival. Last year was the first year members of the Jumano Nation of Texas formally participated in the festival.

Musical headliners include Destino Band, out of Midland, on Friday night and Erick y su Grupo Massore, out of San Antonio, on Saturday night. A number of local acts will also join the lineup, including Hector y su Grupo Ambicion, a local group who will put on their first show on Friday following a set by Primo y Beebe.

“We have so much great talent here that it’s really easy to fill in those slots with bands that people are going to love and entertainment that’s going to be great for our audience,” said Boyd.

This year’s festival will also see the performance of a play, Juice Joint Criminal, written by Sul Ross student Caitlynn Almance specifically for Marfa Lights weekend and produced in partnership with Marfa Live Arts. Marfa ISD’s Ballet Folklorico will perform on Sunday, the third and final day, which will feature more family-focused programming. The day will kick off with a morning Zumba class hosted by local instructors Elizabeth Gutierrez, Angela Ramos, JC Meador and Keila Vargas-Contreras.

On Sunday evening at the USO, Ballroom Marfa will host MXTX: A Cross-Border Exchange, a live musical performance and collaboration between numerous artists from Texas and Mexico, as a part of the festival.

The Marfa Chamber of Commerce, which is volunteer-run, has been hard at work organizing Marfa Lights for the community, said Boyd. The chamber is welcoming new members, she said, with a special interest in cultivating the next generation of Marfa’s leaders.

“We really especially want to engage the next generation of leaders in this town, who were born and raised here who have deep ties to Marfa, who are interested in carrying on these traditions,” said Boyd. “We really want to bring back Marfa’s glory days for our locals where community is number one.”

A map of the Marfa Lights Parade route and schedule of performances can be found in this week’s print edition of The Big Bend Sentinel. For more information, visit http://marfachamberofcommerce.org/

marfa lights festival
Stay in touch with The Sentinel
Related