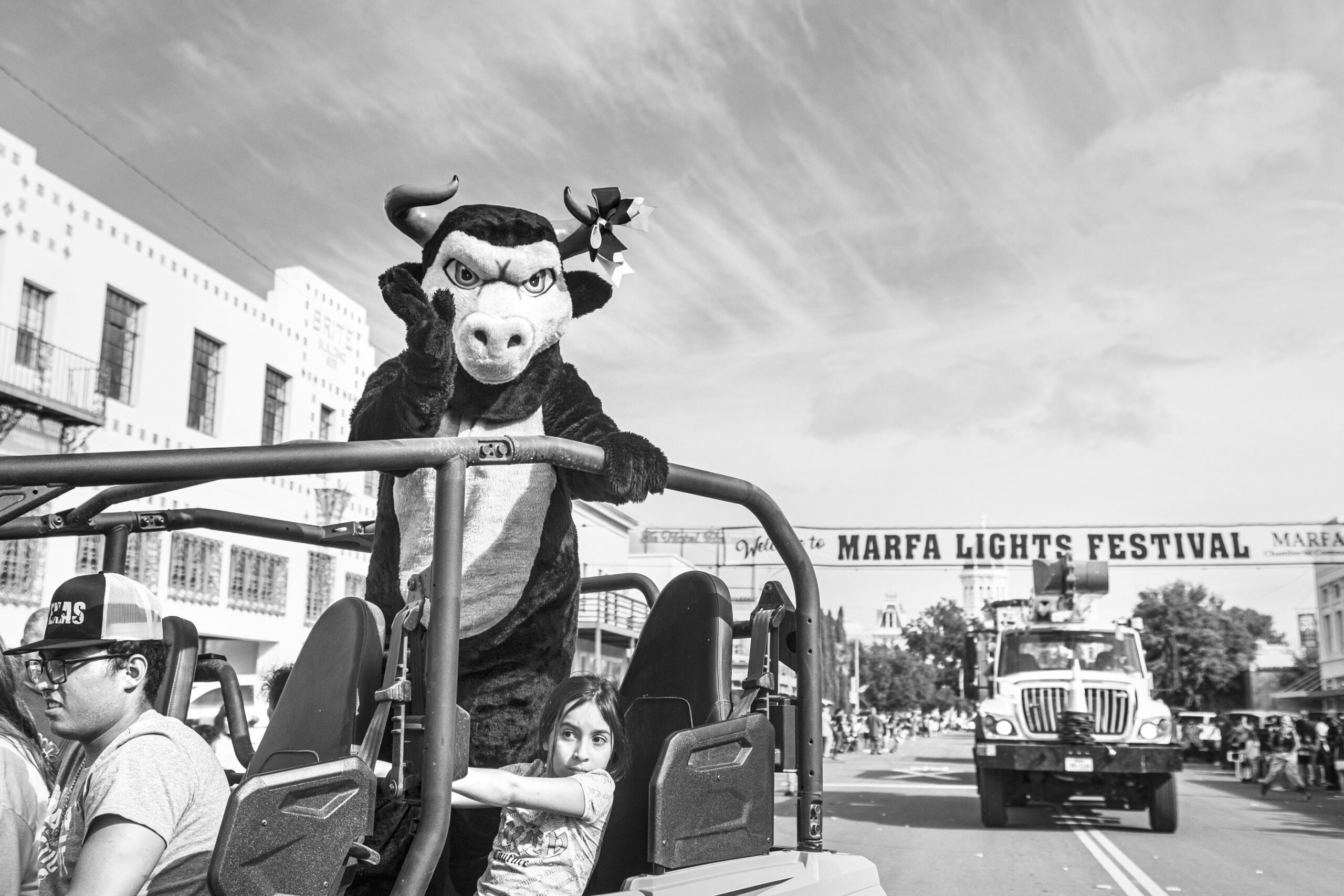 MARFA — The 35th Annual Marfa Lights Festival took place this past weekend, and included the first performance of a live melodrama play since the festival’s inception in 1987. It also prominently featured members of the Jumano Nation of Texas, who connected with locals to share information about the area’s Native American heritage and culture.

This year the grand marshal of the parade was Jo Ann Betancourt, tribal chair of the Jumano Nation, whose group was participating in the festival for the second year running. “It was such an honor to be asked to be the grand marshal,” said Betancourt. “That’s big for the Jumanos. I proudly represented them.”

The parade, which took place on Saturday morning, was led by Betancourt and the spirited Presidio High School Blue Devil band. A honking, waving, candy-throwing procession slowly made its way through downtown Marfa. Nearly every mode of transportation, from horses to motorcycles to classic cars, could be found — even a group of kids manning go-karts whizzed by. A 16-wheeler hauled a rather unusual load — Marfa High School’s student athletes — and was followed by mascot Bullette, who traveled in style in her own chariot and blew kisses to the audience.

Shorthorn pride was also on display on Marfa High School’s Class of 1982 reunion float. Local business Bee’s Hive restaurant went all out with a bee-theme float, complete with beekeepers, and dancers dressed as different cuts of meat were the highlight of the Marfa Meats float.

Betancourt invited anyone who identifies as Indigenous to walk in the parade with her — participants included other Jumano Nation members Harley and Elizabeth Flores, and local individuals from Alpine and Marfa who identify as Jumano. To emulate historically accurate dress, the Flores’ wore buffalo hides and Betancourt walked with a staff made out of a sotol stalk and a fan, which is a traditional spiritual object, made for her by a man identifying as Lipan Apache, she said. Marfa is the ancestral territory of the Jumano Nation, Lipan Apache and Mescalero Apache. The Jumano Nation was present throughout the weekend at the Big Bend Conservation Alliance booth. Their setup contained a large banner with all of the Jumano family names — Aguilar, Carraso, Lujan and more — which Betancourt said was compelling and helped bring people in to talk to them at the festival.

The Jumano family names are those known to be given to the Jumanos by Spanish colonizers. Betancourt, who also acts as the enrollment registrar for the Jumano Nation of Texas, often helps people research their ancestry and family histories in Far West Texas. So far, there are around 200 individuals with Jumano roots enrolled with the Jumano Nation of Texas, she said, and they are hoping more will register. She said part of her conversations this past weekend revolved around helping people with relatives from the area trace back their lineage.

“They did some farming in Lajitas, they worked in the silver mines in Shafter, the mercury mines in Terlingua. They helped the cotton farmers up in Big Bend,” said Betancourt of the histories she heard. “It’s those descendants that are reaching out to us.”

She said people traveled from Alpine, Van Horn and more to visit Jumano Nation members at the Marfa Lights Festival and she was grateful to be able to give those with Jumano heritage a platform and encourage younger generations to engage with their past.

“Being Native American itself is incredible, it’s something to be proud of, even better when you know something about it that you can trace the history back,” said Betancourt.

An impromptu pow wow, or Native American ceremonial dance, was performed by Marcus Pacheco, who traveled to the event from Odessa, and Esperanza Aguilar, who offered up the drum music for Pacheco’s dance.

Another memorable performance at Marfa Lights was of Juice Joint Criminal, a murder mystery play set in Far West Texas written and directed by Sul Ross Theatre student Caitlynn Almance. Abby Boyd, president of the Marfa Chamber of Commerce, reached out to Marfa Live Arts about the idea to put on a non-musical performance at this year’s event to pay homage to the inaugural Marfa Lights in 1987, which involved a live melodrama.

Almance had the idea to track down the original script from the 1987 play but, due to time constraints, opted to write her own 1920s-inspired murder mystery instead.

“Melodramas are so much fun, they’re very overdramatic, they’re over the top, the characters are so funny. And you don’t need a lot of characters to perform a melodrama, which is the best part,” said Almance.

The actors in the play consisted of mostly local talent, including some Sul Ross Theatre students, and starred Alyn Covington as Josie, Dillon Orr as Erik, Yaritza Corona as Nancy, Cristian Sanchez as Donny, John Aguero as William, Sabine Blaese as Claire and Jenna Reyes as towns lady. Producers were Boyd, Jose Prat and Tina Rivera.

“The whole rehearsal process, everybody was so willing to do anything that I asked of them. All the actors would go above and beyond to embody these characters. So that was a lot of fun,” said Almance of the time period leading up to the show.

Juice Joint Criminal played out at the intersection of Lincoln and Highland streets, which allowed the audience to get up close and personal with the characters, despite some technical kinks with the sound quality, said Almance.

“I kind of love the fact that we’re on the street. It creates this really nice essence of the audience being there with the actors, rather than the actors being up on stage and the audience is watching,” said Almance.