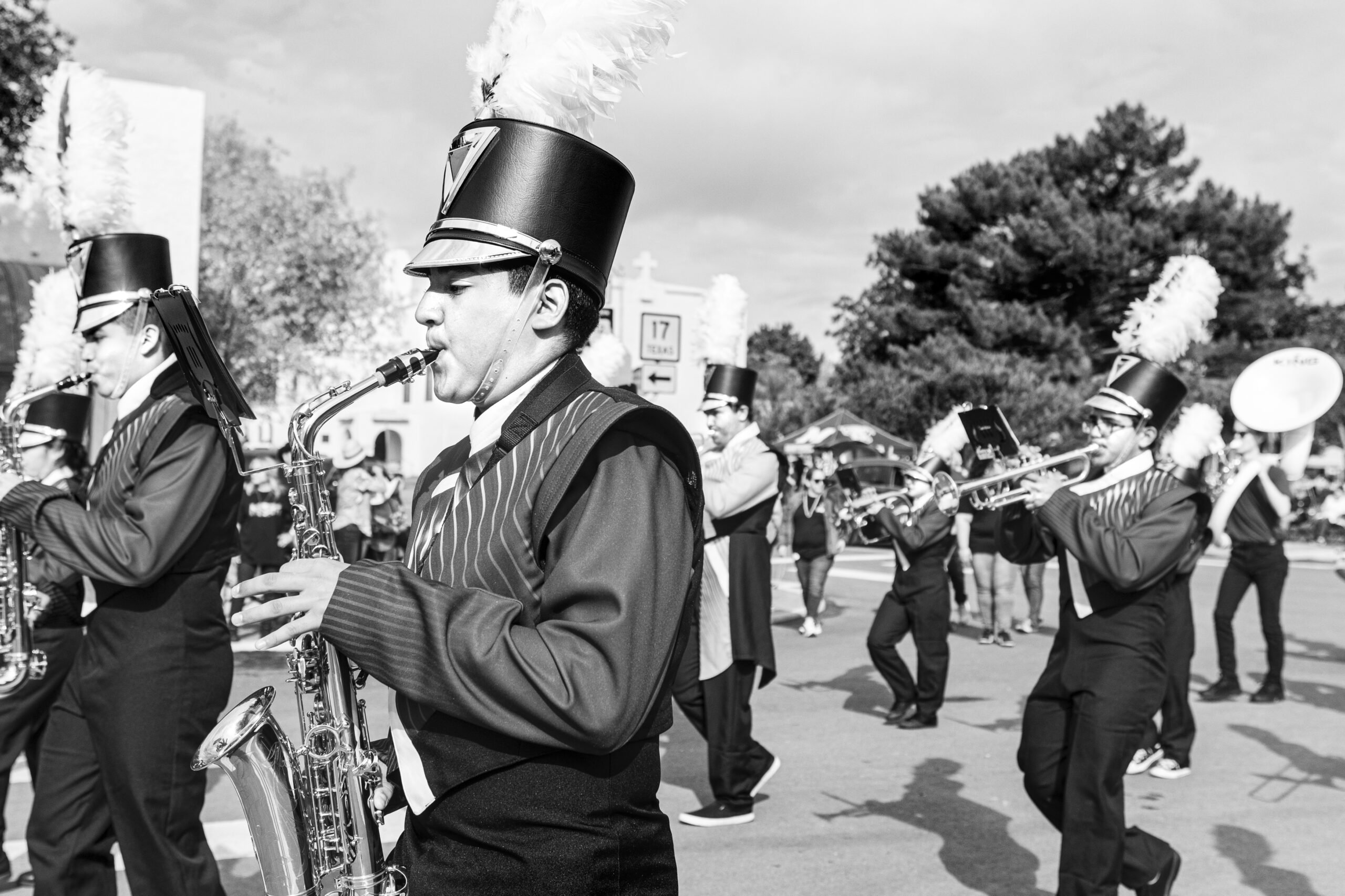 MARFA — Last Saturday, the Presidio High School Band strutted their stuff in the Marfa Lights Parade, an annual festival that many view as a homecoming celebration — and an excuse to tear up the dance floor to a mostly-Latino lineup. The Presidio band kept with tradition, marching to a song called “Las Nubes,” arranged by Mayor and former band director John Ferguson.

“Las Nubes” is one of the most famous songs by legendary Tejano musician José “Little Joe” Hernández, who has toured since the 1950s. “It’s a song with a message,” Hernández said of the hit — one that he performed for Cesar Chavez after taking an interest in joining Chavez’s labor movement.

It’s a song that sparks nostalgia for many throughout Latino Texas, with a theme of hope and perseverance through hard times. “​​Las nubes van pasando se paran un llovisnar. Parece que se sostienen, cuando a mi me oyen cantar,” Hernández’s chorus goes. “The clouds pass by, a drizzle stops. They seem to hold when they hear me sing.”

Ferguson picked the song to appeal to that nostalgia. “A lot of old-time Marfa folks are big Tejano music lovers,” he explained, “We made sure to play a song in the parade that they would recognize.”

An arrangement of “Las Nubes” for a high school band didn’t exist, but that was no challenge for Ferguson, who’s been both a music educator and a musician for decades — his family band, Mariachi Santa Cruz, is a staple in the local Latin music scene. “When I heard them marching down the street, I actually started tearing up — it was great to hear them play,” he said.

His daughter, Molly Ferguson Rodriguez, has taken up the family mantle as the current Presidio High School band director. “I grew up in that band room,” she said. “It’s a part of why I am me. It’s such a nice experience to work with the kids at Presidio High.”

She was proud of the kids for how well they performed despite not having that much time to practice — school started just a few weeks ago. “That really didn’t matter, they were super determined,” she said. “It was a shout out to the older generation’s kind of music.”

Rodriguez said the kids were especially excited to wear their new uniforms — “a complete upgrade” from the vintage uniforms the school had been stockpiling since the ‘90s. “Originally, we were just going to wear a T-shirt, something simple,” she explained. “But the kids wanted to go ahead and do the uniforms. They were purchased last year and still very new to a lot of them.”

The only thing that was missing from the traditional marching band lineup was a strong tuba player — Rodriguez’s brother, Maxwell, filled in at the last minute. She currently has three horn players who can fill in tuba parts, but tuba is not their primary instrument and there’s a steep learning curve. “Those kids stepped up to the plate immediately,” she said.